Our Materials Price Index (MPI) fell 1% last week, resuming its downward trajectory following the previous week's increase. As has been the case since the correction began in the first quarter, the decline was broad, with seven of the MPI's ten subcomponents falling, reaffirming the downward momentum in commodity prices over the past five months. The MPI is now 20.1% below its all-time high established in early March. 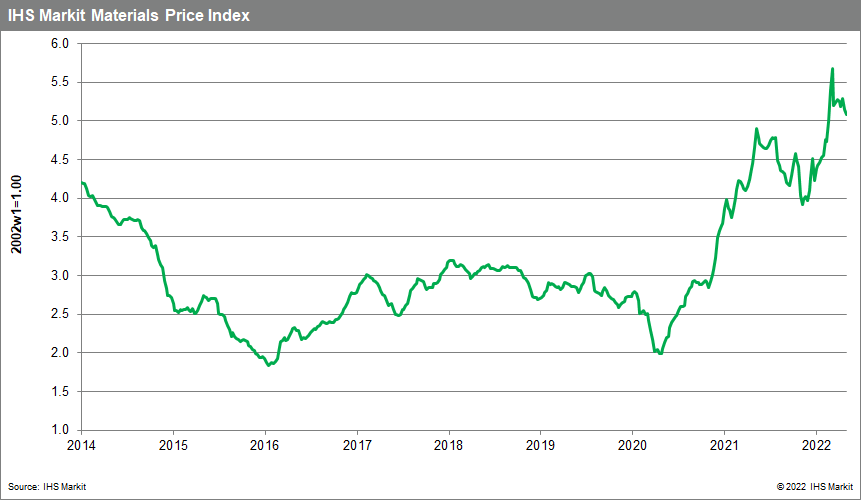 Price declines last week were most significant in energy and lumber. The energy sub-index fell 4.5% as oil prices slipped to their lowest level since February. Brent Crude, the international benchmark, settled below $100/barrel with prices reacting to weakening macroeconomic fundamentals. Oil traders were spooked by the 0.5 percentage point increase in interest rates by the Bank of England, which they viewed as further evidence of reduced demand in the near term. Lumber prices also declined last week, with our sub-index falling 8%, its fourth consecutive weekly drop. Prices fell to $505 per thousand board feet, a level last seen in September 2021. Higher mortgage rates in the US have cooled housing market activity, significantly lowering lumber demand.

Weaker demand expectations are weighing on commodity prices with markets turning more bearish last week (ending Friday 5 August). The US employment report showed that nonfarm payroll employment rose a strong 528,000 in July, more than double the consensus expectation. This was taken as a sign that the US Federal Reserve will need to tighten more sharply than previously hoped. Whether the US Federal Reserve and other central banks will feel the need continue lifting interest rates into 2023 remains an open question. Commodity prices, however, have peaked with this change upstream in supply chains now beginning to migrate downstream into intermediate materials. Our caution in the sanguine view of goods price inflation is that spare capacity in energy markets and inventory in metal markets remains low, exposing both to a potential rebound in prices should there be any loss in supply or better than expected demand.