Our Materials Price Index (MPI) increased a modest 0.3% last week, a change from the large price declines witnessed in the three previous weeks. The increase was narrow with only five out of ten subcomponents rising. Despite last week's rise the change in commodity prices is clear with the MPI 30.3% lower than its all-time high established back in early March. However, commodity prices, as measured by the MPI, remain 40% higher than the pre-pandemic level in January 2020. 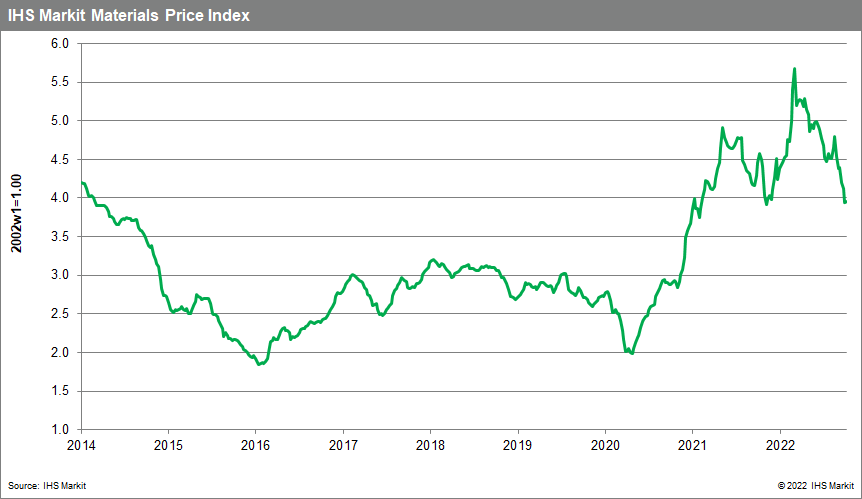 Price increases last week were most notable in the industrial metals and chemicals portion of the MPI. The nonferrous metal sub-index rose 0.5% as supply concerns dominated weekly trading. The price of lead hit a two-month high of $2,096 per tonne as physical stocks dwindled. Lead prices have increased by 14% in the last two weeks as inventory at London Metal Exchange (LME) warehouses sunk to the lowest level in over twenty years. In addition, output from two major global smelters is under question as Nyrstar announced plans to take its Australian Port Pirie operation offline for 55 days and Glencore is considering the future of its Portovesme plant in Italy. Demand side support is stronger for lead than other metals since the major end-use is Electric Vehicle (EV) batteries. Strong replacement demand will keep buyer interest elevated in the near-term lending support to last week's upward price move. The chemical sub-index was up 1.6% last week as higher oil prices led to an increase in feedstock costs. US ethylene spot prices climbed to 21.63 cents/pound from 19 cents/pound the previous week. With chemical producer margins squeezed the increase in oil costs was the major influence on last week's price rise.

Market focus remained on the weakening demand outlook, but sentiment improved on international bond markets providing some support for commodity prices. Strong inflation data in the US convinced markets that central banks will continue to aggressively target inflation. The Consumer Price Index (CPI) rose 0.4% in September following a 0.1% increase in August. The core CPI, which excludes the direct effects of moves in food and energy prices, rose 0.6% for the second consecutive month. The acceleration of core inflation over the last two months leaves another super-sized rate hike of 75 basis points on the table at the upcoming November Federal Open Market Committee (FOMC) meeting. The decision by the UK government to partially reverse some of the previously announced unfunded tax cuts and subsidies eased some of the recent volatility in markets. Despite last week's commodity price increase, weak demand will dominate pricing in the near term. Lower commodity prices foretell a welcome slowdown in goods price inflation into 2023.