Our Materials Price Index (MPI) fell another 4.3% last week, its fifth decline in the past six weeks. In a change from recent patterns the decline was narrow with only five out of ten subcomponents falling. That said, the change in commodity prices is clear with the MPI now 30.5% lower than its all-time high established back in early March. Commodity prices, as measured by the MPI, are now 11.2% lower than in October of last year. 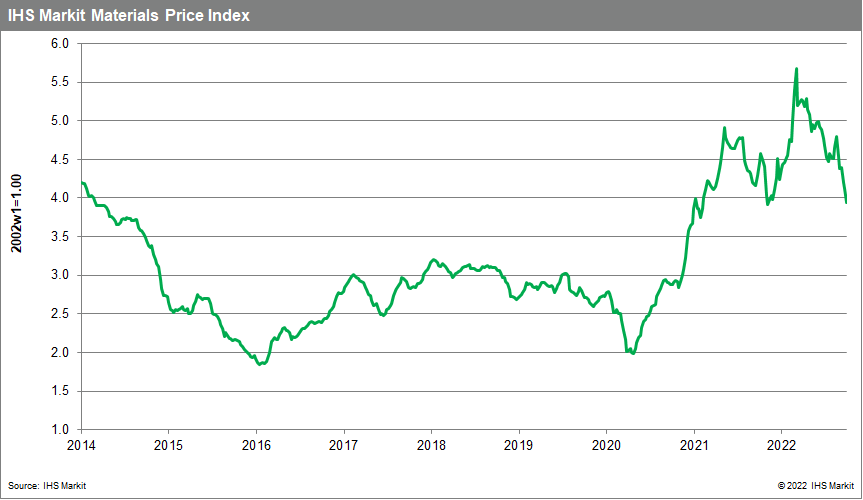 Price declines last week were most notable in the energy portion of the MPI due to downward movement in natural gas and coal. The sub-index dropped 11.3% primarily due to improving European natural gas fundamentals. Spot prices of European liquefied natural gas (LNG) fell to $27.62/MMBtu, from a high of $41.26 the previous week. This is the lowest price for three months and the largest weekly price decrease this year. Prices were responding to the news that European Union natural gas storage levels were more than 90%, up from 30% in February and that consumption has been cut by more than 10%. The statement from European Commission President Ursula von der Leyen that the European Union has commenced work to "cap prices" also served to calm markets last week. It was not all good news on energy prices, however, with oil prices rebounding 5% after the latest OPEC+ meeting. OPEC+ announced a voluntary reduction in its August 2022 production target of 2 million barrels/day; this is an effective cut of 1 MMb/d since some members are unable to produce as much as allocated. Brent Crude, the international oil benchmark, reached $97/barrel after the announcement up from a low of $89/barrel the previous week.

Market focus returned to the weakening demand outlook last week and this continues to weigh on commodity prices. Strong labor market data in the US convinced markets that central banks will continue to aggressively target inflation. US nonfarm payroll employment rose 263,000 in September, and the unemployment rate declined 0.2 percentage point to 3.5%. The gain in payrolls was in line with expectations, but the decline in the unemployment rate generally was not. The result was an increasingly bearish market outlook with interest rate rises to continue. This central bank action remains the key factor in the downward price correction in commodities over recent months. Although supply-side risks in energy markets remain, demonstrated by the OPEC+ announcement last week, weak demand will dominate pricing. This sharp decline in commodities foretells a slowdown in goods price inflation into 2023.