Our Materials Price Index (MPI) fell another 1.9% last week, its fourth decline in the past five weeks. The sell-off was again broad with eight out of ten subcomponents falling, highlighting the downward momentum in commodity prices over the past seven months -- the MPI is now 27.3% lower than its all-time high established back in early March. Commodity prices, as measured by the MPI, are now 3.8% lower than in October of last year. 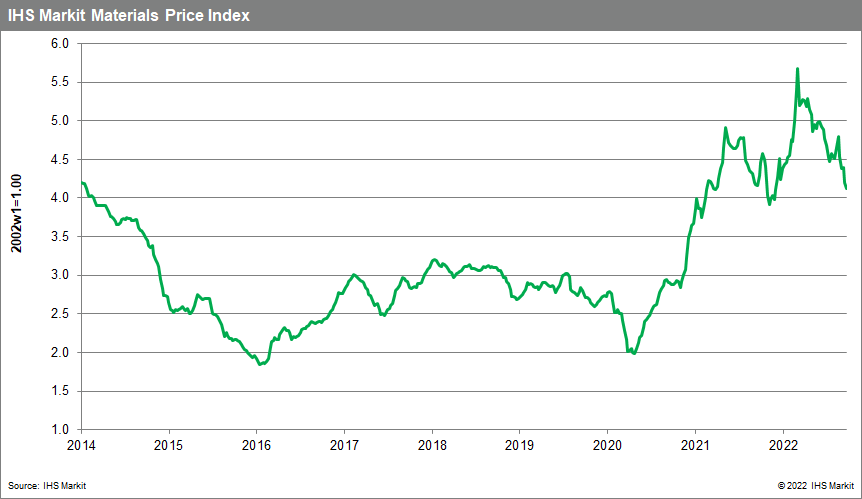 Price declines last week were most extreme in chemicals and lumber. The chemical sub-index dropped 7.1% amidst weak demand and global oversupply. US ethylene prices fell to 20 cents/pound from 21.75 cents/pound the previous week. Inventory levels for ethylene in the US are at maximum levels and chemical plant output was unaffected by the arrival of Hurricane Ian on the US Gulf Coast. Demand in all regions is suppressed and some producers in Europe have been offering discounts of up to 40% on spot volumes and still not attracting buyers. Although demand from all sectors is falling the decline from construction has been stark. As central banks raise interest rates, the rates for residential mortgages also increased and this has suppressed demand for homes. Residential building permits in the US were 10% lower in August compared to July, according to the latest data from the Census Bureau. Lower construction demand drove the lumber sub-index down 8% last week. Lumber prices dipped to $410.80 per thousand board feet, the lowest point since June 2020. Prices had been at $1464 in March this year demonstrating the dramatic change in market conditions since then.

It was another tumultuous week in markets with equities and bonds experiencing a sharp sell-off. The S&P 500 index has now declined for three quarters in a row, the longest stretch since the financial crisis in 2008. Bond markets were rattled by the decision of the UK government to announce a series of unfunded tax cuts and subsidies which forced the Bank of England to intervene amid a "risk to financial stability." At the heart of recent market turmoil is the determination of central banks to tackle high inflation. This remains the key factor in the downward price correction in commodities over recent months. Although supply-side risks in energy markets and low inventory in some metals have the potential to trigger prices increases in the near term, weak demand will dominate pricing. This sharp decline in commodities foretells a slowdown in goods price inflation into 2023.