Our Materials Price Index (MPI) decreased 0.5% last week, reversing course after the previous week's modest rise. The decrease was broad with seven out of ten subcomponents falling. Last week's decline is further evidence of the change in commodity markets with the MPI 30.8% lower than its all-time high established back in early March. However, commodity prices, as measured by the MPI, remain 40% higher than the pre-pandemic level in January 2020. 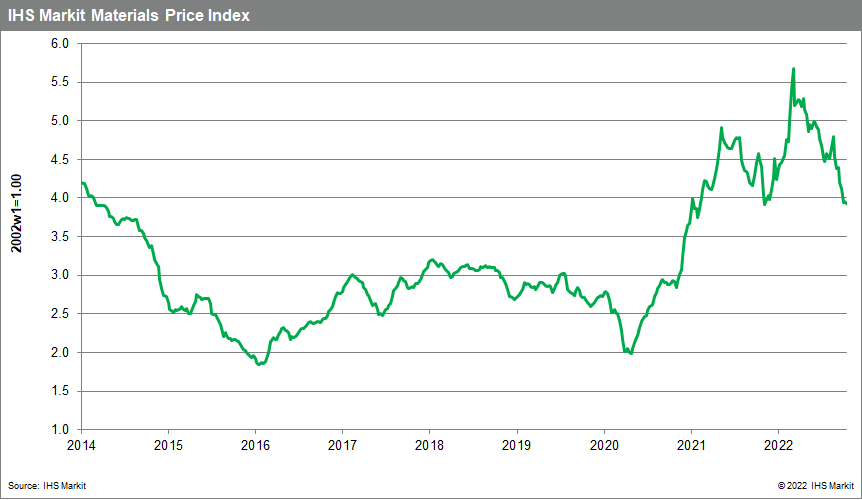 Price decreases last week were most notable in industrial metal markets. The nonferrous metal sub-index fell 2.3% as supply data improved and traders remained bearish on demand. The price of aluminum slid to $2,155 per tonne from $2,373 per tonne the previous week as physical stocks increased to the highest level in six months. Data from the London Metal Exchange (LME) showed that large inflows were recorded at warehouses in South Korea and Malaysia. This has prompted speculation that excess Russian supply, spurned by western markets, is being shipped to Asian countries where no import bans exist. The steel making raw materials sub-index declined 1.3% last week after strong supply figures from major producers. Iron ore traded at $94.76 per tonne having been as high as $146/tonne in June after BHP, the world's largest miner kept its production schedule unchanged despite weakening demand. Increased quarterly production and shipment figures, from Vale and Rio Tinto respectively, added to the good news on iron ore supply and sent prices downwards.

Market focus remained on the weakening demand outlook with the Communist Party congress in Beijing taking center stage last week. At the meeting, President Xi Jingping announced there would be no immediate reversal of the COVID-19 containment policy in mainland China. This dampened hopes of a resurgence in commodity demand in the country and was a particular drag on industrial metal prices. With markets expecting central banks to continue aggressively targeting inflation the demand environment for commodities remains bearish. Since weak demand is expected to dominate price movement in the near term, lower commodity prices foretell a welcome slowdown in goods price inflation into 2023.