Our Materials Price Index (MPI) decreased 1.5% last week, the seventh decline in the past nine weeks. The decrease was broad with eight out of ten subcomponents falling. Last week's decline is further evidence of the change in commodity markets with the MPI 31.8% lower than its all-time high established back in early March. However, commodity prices, as measured by the MPI, remain 40% higher than the pre-pandemic level in January 2020. 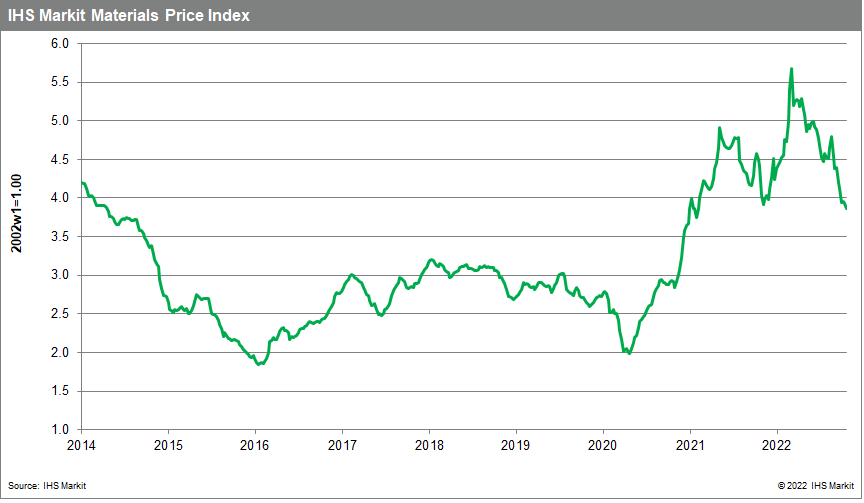 Price decreases last week were most notable in energy markets. The energy sub-index fell 2.1% as milder weather in Europe reduced demand for natural gas. Spot prices of European liquefied natural gas (LNG) fell to $27.98/MMBtu, from a high of $29.06 the previous week. European spot prices for LNG are now 60% lower than in August when Russia severely restricted supply to the continent. Prices have tumbled because storage facilities in Europe are almost full and mild weather has reduced demand for heating. This is on top of the demand restriction initiatives started by EU countries ahead of the peak winter months. While this oversupply situation is likely to be short-lived it highlights the current precarious position of European energy markets. A prolonged period of cold weather is likely to lead to higher prices and further energy rationing this winter. It also poses problems for next winter as European storage will have to be replenished without Russian supply. New lockdowns in mainland China provided additional downward pressure on commodities last week. Iron ore and natural rubber prices fell after several cities in mainland China, including Wuhan, were placed under partial lockdowns after a spike in COVID-19 cases. Natural rubber prices on the Singapore exchange fell to a two-year low of 144 cents/kg after the news.

Prospects for slower demand continue to weigh on commodity prices, with central bank actions last week further harming market sentiment. The European Central Bank (ECB) raised interest rates by 75 basis points, and rates have now increased by a cumulative 200 bps since the ECB started its tightening cycle in June 2022. The ECB also highlighted that the economy is likely to weaken further in late 2022 and early 2023. With markets expecting central banks, including the Federal Reserve at its November meeting, to continue aggressively targeting inflation the demand environment for commodities remains bearish. Since weak demand is expected to dominate price movement in the near term, lower commodity prices foretell a welcome slowdown in goods price inflation into 2023.