An assortment of data releases packs the week ahead including US and China's retail sales and industrial production figures. GDP data from the eurozone and Japan will also be expected in addition to inflation data from Canada, the eurozone, and Japan. Meanwhile central banks in Indonesia and the Philippines will update their monetary policy decisions with further rate hikes expected. This is as Indonesia hosts the G20 meeting with various world leaders in attendance.

Political news dominated the headlines this week with the US midterm elections capturing the market's focus. That said, while we have yet to receive confirmation of the US Senate's control at the point of writing, our latest S&P Global Investment Manager Index indicated that US equity investors are seeing less of a drag from the political environment just ahead of the elections. Instead, monetary policy and the global macroeconomic environment remain the two biggest factors weighing on equity market performance in the near-term and it is not hard to see why that is so.

Amid such a backdrop, official data including US and China industrial production and retail sales figures will shed light on the production and consumption picture in the two countries. Furthermore, Japan releases Q3 GDP to outline the effects of weaker external demand upon growth in the third quarter, while inflation data from Japan and India will also be expected.

Central bank meetings in the APAC region - Bank Indonesia and Bangko Sentral ng Pilipinas - will also be in focus after the Fed further hiked interest rates at the start of November. Bank Indonesia, in particular, may deliver another aggressive hike in bid to bring inflation under control.

Business confidence, where art thou?

The latest JPMorgan Global Composite PMI showed business confidence in decline in October. Global private sector firms were the least upbeat in 28 months with confidence falling across both the manufacturing and service sectors, altogether alluding to further pressures for growth ahead. 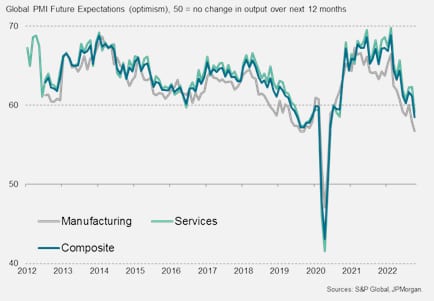 Specifically, the frequency of mentions for 'economic risks' in the PMI surveys was at the highest since the global financial crisis, barring the pandemic, while mentions of 'recession' had also risen markedly. 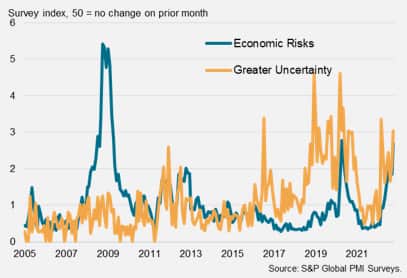 Official retail sales and industrial production data will be due from the US in the coming week. Consensus expectations currently point to faster retail sales growth though industrial production growth may moderate in October. The latest S&P Global US Manufacturing PMI indicated slower output growth amid a sharp fall in demand. Meanwhile PPI data will also be released following the CPI figures this week.

Final Q3 GDP and October inflation data will be released in the eurozone next week to confirm the modest Q3 growth that was seen. German ZEW survey figures will also be released on Tuesday.

In APAC, Bank Indonesia will be updating their monetary policy decision on Thursday and we are expecting a 50 basis points expected for the third consecutive month in November to continue the aggressive monetary policy tightening. Despite inflation easing in October from the seven-year high prior, further attempts to nudge the elevated inflation rate down is expected to continue. Likewise, the Philippines central bank Bangko Sentral ng Pilipinas (BSP) may also further lift rates.

In Japan, Q3 GDP and October inflation figures will be due next week with the consensus pointing to a slowdown in Q3 growth to 0.3% quarter-on-quarter. Weaker external demand has weighed on Japan in the third quarter.

China's October retail sales and industrial output will also be released next week with the consensus pointing to a slowdown at the start of Q4.