In twelve-month changes, overall Consumer Price Index (CPI) inflation was 8.2% in September and core CPI inflation rose to a four-decade high of 6.6%. Based on detailed data in the CPI, we estimate that the core personal consumption expenditures (PCE) price index rose 5.1% over the 12 months through September.

Rent inflation, which has large weights in both CPI and PCE inflation, averaged approximately 9% over the last three months, more than double the pre-pandemic norm. New agreements reflect a softening in rents, foreshadowing a reduction next year in rent inflation in the CPI, which is based on average rents (both new and existing agreements). That will contribute to an eventual reduction in core inflation. 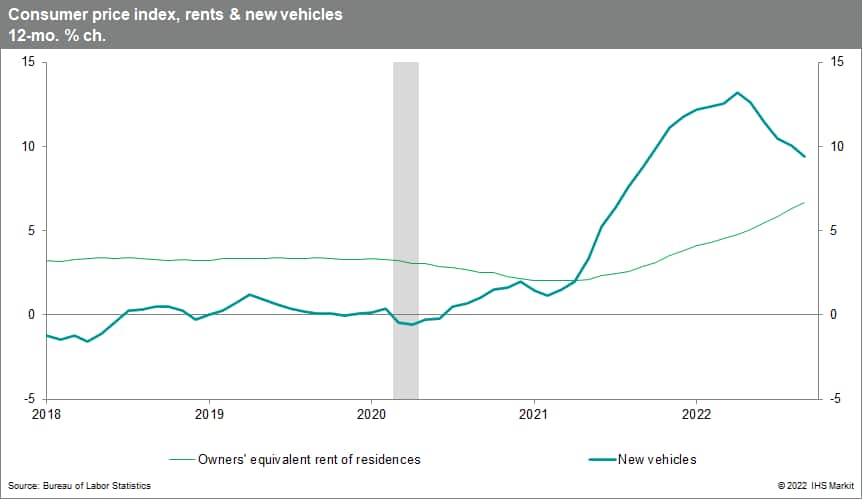 The disinflationary impulse from lower rent inflation is a few quarters into the future and, by itself, will not be sufficient to support a full reduction of inflation to the Fed's 2% target. The Fed will be forced to raise interest rates to support tight financial conditions and a softening in demand in pursuit of lower inflation. The Federal Open Market Committee (FOMC) will respond on Nov. 2 with another super-sized rate hike of 75 basis points, bringing the target for the federal funds rate to a range of 3¾% to 4%.

Additional rate increases at subsequent meetings in December and early next year are virtually assured. We expect that declines in core inflation and indications of softening in labor markets will prompt the Fed first to slow and then to pause rate hikes next spring after lifting the target funds rate to a range of 4½% to 4¾%.

Decisions on interest rates will be influenced by incoming data on inflation and other developments pertaining to the inflation outlook, so there are risks to the forecast for Fed interest-rate policy. The likelihood of a recession sparked by Fed tightening will not be enough to keep the Fed from continuing to raise interest rates as it strives to lower inflation to its 2% target.

We expect the US to fall into a mild recession beginning in the fourth quarter, when we expect GDP to contract at a 1.0% annual rate. This would follow (our estimate of) a 2.4% increase in the third quarter when a large increase of net exports contributed approximately 3.0 percentage points to GDP growth.

We expect a substantially smaller growth contribution from net exports in the fourth quarter, alongside declines in residential and business investment and meager growth of real consumer spending. We project that GDP will continue to decline during the first half of next year, resulting in a cumulative decline over 3 quarters of 1.1%.

This week's US economic releases: