US midterm election scenarios: Divided Congress is most likely outcome

In the US midterm elections on Nov. 8, we expect the most likely outcome will be that Democrats retain the Senate, and Republicans win the House of Representatives.

We base our assessment on the closeness of the Democrats' majority in Congress and the tightness in generic congressional party polls — polls asking voters whether they intend to vote for an unnamed Democratic or a Republican candidate. 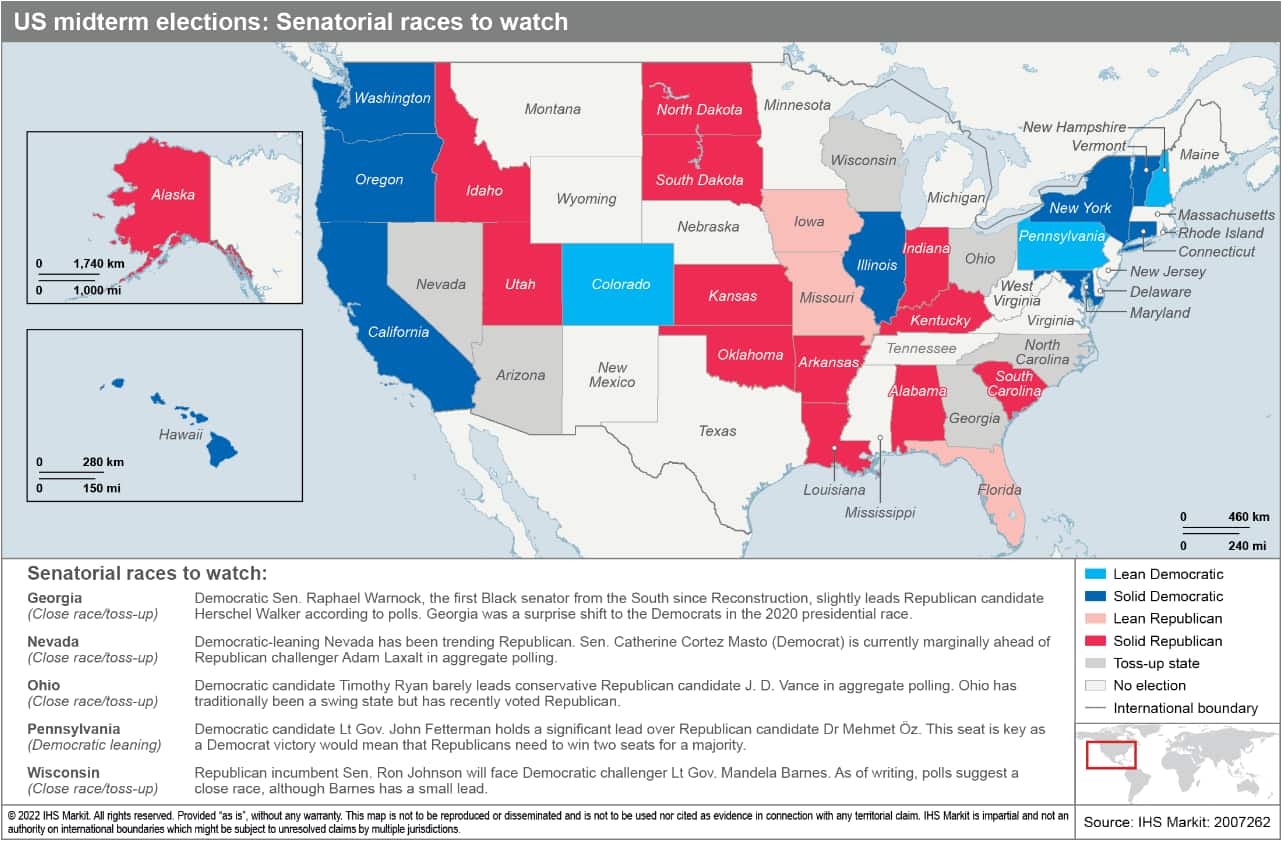 In a split chamber outcome, President Joe Biden would rely on executive actions to pursue administration priorities, such as finalizing negotiations of the Indo-Pacific Economic Framework, reduction of carbon emissions, and efforts to ease inflation. Policy gridlock will increase, with higher risks of government shutdowns and debt ceiling fights. Congressional Republicans will conduct investigations into alleged misdeeds by the administration of President Biden.

The next most likely scenario is that Democrats win both congressional chambers. The party has begun to recover from a slow start in the polls. Democratic candidates have also been significantly outraising their Republican counterparts in campaign fundraising.

These shifts are likely due to factors including the Supreme Court's decision to overturn the federal right to abortion, lower petrol prices, resurfacing negative sentiment towards former president Donald Trump among Democrats, recently passed healthcare and climate change legislation, and the president's executive action to forgive some federal student debt.

Republicans winning majorities in both chambers — the most likely scenario only four months ago — is now the third-most likely outcome.

Under the scenarios of a split chamber or a Republican sweep of both chambers, opportunities for bipartisanship would include foreign policy, infrastructure, immigration, and supply chain resilience.

Historically, midterm elections represent a referendum on the president. Issues weighing down the president's approval rating include high levels of inflation, concerns about economic growth, and numbers of undocumented immigration crossings and violent crimes at levels not seen in decades, along with some voter perceptions that the president's age prevents him from adequately performing his job.

Factors favoring Republican candidates include voter discontent about high levels of inflation, crime, and illegal immigration, and the 2020 redistricting of House seats that have given Republicans an advantage.

Factors favoring Democrats include some voters' sentiment over the US Supreme Court's decision to overturn federal abortion rights, recently passed domestic legislation, and a Senate map favoring their party.

Policy gridlock would be almost certain, with a series of procedural and symbolic actions taken in the House to damage President Biden's popularity.

Democratic efforts to enact broader climate policies and social programs through legislation, such as renewable energy development and expanded childcare and elder care, will not see much success until after the 2024 presidential and congressional elections at the earliest, when they would have an opportunity to regain congressional majorities.

As in previous instances where one party controls the House and the other has the White House, odds of partial government shutdowns or fights over the debt ceiling would increase.

Scenario 2: Democrats have majority in House and Senate

The Biden administration would look to advance items on its domestic social policy agenda that require congressional approval.

Prospects for passage of the Biden administration's legislative goals would remain steady, if not increase, upon gaining additional Senate seats. If anything, President Biden is likely to attempt to moderate policy coming from Congress as he prepares for the 2024 presidential election. He will also continue pursuing presidential policy through executive orders and the normal regulatory process.

Even if Democrats expand their Senate majority only marginally, they are likely to attempt to pass further BBB legislation related to federal student loan reform, childcare, and eldercare, among other social provisions excluded from the IRA.

Republicans will almost certainly attempt to pass symbolic legislation on taxes, education, immigration, and government spending. Most of this legislation would fail, as Senate Republicans would not have the 60 votes to overcome Democratic filibusters. If attached to must-pass budgetary legislation, then Biden would most likely veto these bills, increasing the probability of a partial government shutdown.

The prospect of debt ceiling fights would also increase, although the likelihood of an actual debt default remains quite small.

The best time for bipartisanship would be in the six months following the Republicans obtaining power and the six months prior to the presidential election in November 2024, with Republicans reluctant to give President Biden a victory that close to voters going to the polls.