Ukraine agriculture exports – what is at stake in the light of invasion?

Ukraine is one of the main world exporters of grains as well as vegetable oils. The main agriculture export products are Corn and Wheat. In 2021 Ukraine was the second largest supplier of grains for the European Union (EU) and a large food supplier for low and middle-income countries in Asia and Africa. The longer the Russia-Ukraine conflict lasts, the more insecurity about food supplies it may bring not only to the Ukraine and the region, but also to the whole world.

Apart from corn and wheat, which definitely play the major role here, among the top ten exported goods, we can name also the following edible goods: 'Animal and vegetable oils, excluding soybean oil', 'Sunflower seeds, rapeseed and colza seeds' as well as 'Other grains and cereals, including rye, barley oats'. 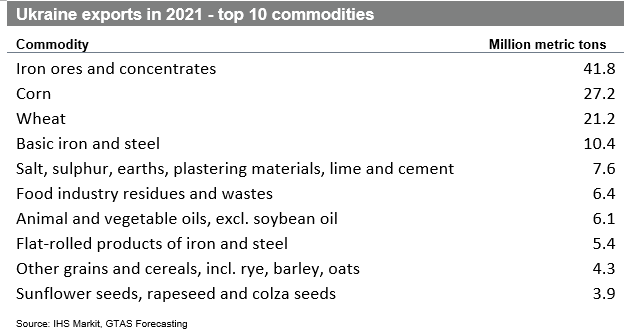 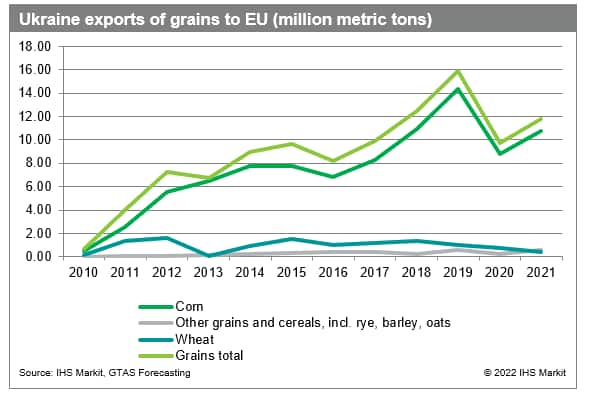 In 2021, according to GTAS Forecasting estimations Ukraine was the second largest supplier of grains (including 'Corn', 'Wheat' and 'Other grains, including rye, barley and oats') for European Union, accounting for 14% of total EU grain imports in terms of volume.

Ukraine is also a large food supplier for low- as well as middle-income countries. According to S&P Global Market Intelligence GTAS Forecasting estimations, in 2021, 55.1% of Ukrainian wheat was exported to Asia and 40.7% to African countries. 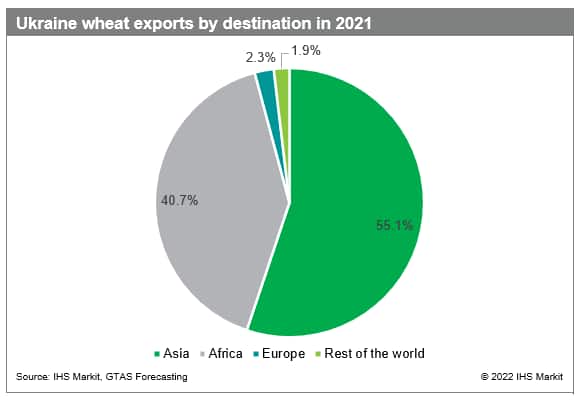 The largest importers of Ukrainian wheat in 2021 were Egypt, Indonesia, Bangladesh, Turkey and Yemen. Most of these countries rely heavily on Ukrainian wheat supplies, mainly those located in North Africa (Egypt, Libya) and Western Asia region (such as Lebanon and Yemen). For Indonesia and Bangladesh Ukraine is also the second largest supplier of wheat.

The longer the Russia-Ukraine conflict lasts, the more insecurity about food supplies it may bring not only to the Ukraine and the region, but also to the whole world. The prices of wheat and corn have already spiked before the war, but due to the conflict we may expect prices rising further, having strong implications on the poorest African economies.

Ukraine as the world's leading exporter of sunflower oil and seed

Ukraine is the largest world exporter of Sunflower Oil (HS code - 1512 Sunflower-Seed, Safflower Or Cottonseed Oil, And Their Fractions, Whether Or Not Refined, But Not Chemically Modified) with the share of 40% of global exports value in the year 2021. 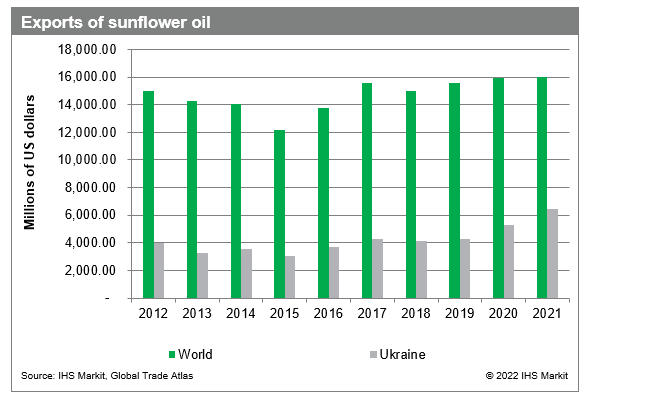 Top receivers of sunflower oil from Ukraine are India, China (mainland), Netherlands, Spain and Italy. With imports of sunflower oil stopped because of the conflict between Ukraine and Russia, India has to look for replacement in other edible oils or to source cooking oils from other countries to maintain domestic supply and prevent retail prices from rapid increases. 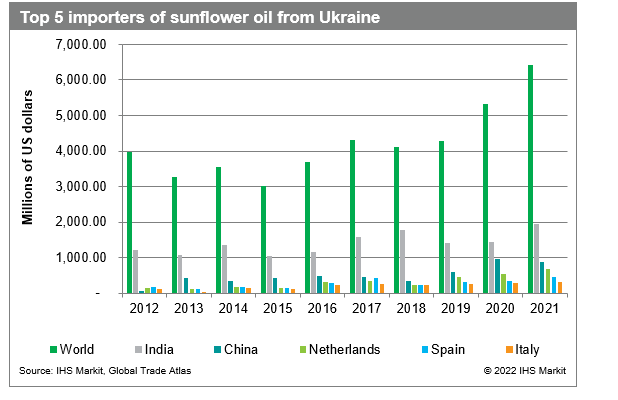 The biggest markets for edible oil are India and China (mainland). Over 80% of India's demand for sunflower oil was supplied by Ukraine in 2021. It seems obvious to predict that the conflict will result in huge supply chain disruptions and already high prices of edible oil in India can be raised further.

Most of the Ukrainian exports is being carried out through ports on the Black and Azov Seas-Odessa, Pivdeny, Chornomorsk, Kherson, Mariupol and Berdyansk. On February 24, when the Russian invasion began, most of the sea ports have been closed, so the ports operation has been already disrupted with no ships allowed to enter or leave the ports.

Head of Ukraine's Maritime Administration confirmed on February 28 that Ukrainian ports will remain closed until Russia's invasion ends, adding that the port of Mariupol has sustained damage from Russian shelling. Moreover, multiple shipping companies have suspended sailings to endangered Black Sea ports. Additionally, at least three commercial ships have been hit by bombs since February 24.

For a number of countries in South Asia, Western Asia and Africa cutting of the major source of supply for wheat, corn and vegetables oils will definitely rise the food insecurity and may even lead to increase in global hunger.

The conflict will also result in supply chain disruptions and rising prices of agricultural products like edible oils in South Asia and other regions.

During the latest USDA Agricultural Outlook Forum, U.S. Trade Representative Katherine Tai described the Russia-Ukraine conflict as the next potential shock to global trade and supply chains. She underlined the position of Ukraine on the global agricultural market and said that we may see the economic impacts of the situation coming soon. It is still too early to assess the long-term consequences of the conflict, but a number of agencies will work on assessing the impact on agriculture trade as well as the whole global economy.

*Methodological note: All the data for 2021 provided in this article sourced from GTAS Forecasting database are still estimates (the fourth quarter of 2021 is estimated, first three quarters already covered by actual data), as not all the countries have reported their full 2021 trade data