The Russia-Ukraine conflict: Beyond the nearer-term implications

Russia's regional ambitions represented a longstanding, open test. Yet, with the invasion of Ukraine on 24 February, Europe's security environment, Ukraine and Russia's economic outlook, the stability of markets have been thrown into the air and are in the process of reshuffling. So too are a host of geopolitical challenges that remained unresolved in a post-9/11, post-Afghanistan, post-Brexit world. Interconnected challenges like supply chain security, financial system integration, trade relationships and migration are no longer simmering in the background as the world seeks to recover from a pandemic.

Despite intermittent ceasefire talks, no clear offramp to the conflict in Ukraine has yet emerged. In line with the Economics & Country Risk team's forecast for the six-month outlook, Russia continues to pursue an escalation pathway, most recently, with a 'Phase 2' focus on capturing all of the Donbas region. Even in the event of an internationally-negotiated ceasefire arrangement, we expect to see prolonged, lower intensity conflict continue unless a true Russian collapse pathway (an outside likelihood) is reached.

While, in our most likely scenario, the conflict remains confined to Ukraine, we contemplate war trajectories where Russia seeks to extend and sustain fighting beyond Ukrainian borders. This looks like spillovers to non-European Union, non-NATO states including Moldova and Belarus, and less likely to broader EU/NATO territory. Russian deployment of Chemical, Biological, Radiological and Nuclear weapons, also remains on the table, albeit from an extremely low likelihood.

On global security, everything from the future global political architecture to security alliances and nuclear proliferation are under scrutiny. An emerging narrative of the conflict, thus far, has been around a growing consensus of the unification of states against the Russian offensive and, thus Russia itself. Yet, votes at the United Nations, its Human Rights Council and a recent walkout at the Group of G20 in response to Russian participation, bely growing misalignments between advanced and emerging economies. 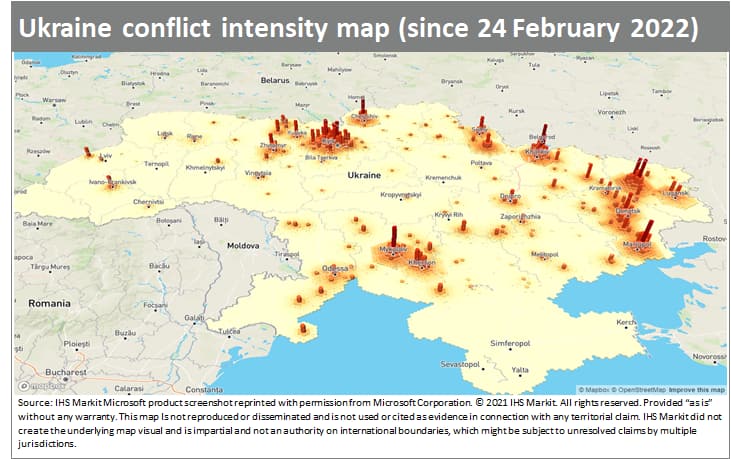 Similarly on global financial integration, spanning the future of globalisation, regionalisation, to trade relations and sanctions, much is now in flux. The broadly-applied sanctions campaign against Russia's banking, defence and commodities sectors, its individuals and institutions, led by the United States and its European allies, has been championed for its effectiveness in isolating Russia from the global economy. A follow-on wave of corporate self-sanctioning has been viewed as corroboration of the global appetite to rely upon economic tools of foreign policy rather than boots on the ground or diplomacy alone. Yet, concern over the precedent being set by the current sanctions and the potential future risk to others of facing such economically consequential penalties is growing across economies in Asia-Pacific, Latin America and sub-Saharan Africa.

The pandemic catapulted supply chain interlinkages and vulnerabilities to the fore. Russia's invasion of Ukraine presents another consequential supply chain shock. The sanctions on Russia have precipitated a renewed conversation around sources of energy reliance and the pace of the energy transition. Equally, the infrastructure disruption and destruction in Ukraine brought by the war has raised new concerns over agricultural commodity availability and food security risks. Whether and how to delink supply chains, whether and how to ensure commodity security are now top of the global agenda.

Irregular migration of those fleeing conflict for Europe is not new. 2015 brought a surge of migrants seeking to escape the war in Syria. Yet, the rapid acceleration of migration from within Europe across Europe - nearly six million have left Ukraine and another seven million internally displaced - precipitated by Russia's invasion has no recent comparison. Beyond the nearer-term impact to Ukraine's economic outlook, a refugee crisis at the centre of Europe will raise long-term implications around border patrolling and cargo disruption, civil unrest, insurgency, policy responses and to labour markets.

We always knew Putin's ambitions for Russia's neighborhood would likely jockey for attention. We just did not know when. Since we watched Russian military personnel and resources accumulate at the Ukrainian border and then cross it on 24 February, Ukraine's economic and security outlook, Russia's role in the world, market volatility around inflationary pressures and commodity pricing are all being closely watched. Alongside these nearer-term trends, the reevaluation of longstanding challenges to the global security environment, global financial architecture, supply chains and migration are also shifting. The cumulative effect of each of these shocks will play out over the years ahead, setting us forward on a new course.

Discover more insightful analysis on the implications of the Russia-Ukraine war from our experts.