The growth of e-commerce

Electronic commerce has now been on the scene for around three decades, and in that period it has transformed the processes of buying and selling goods. Its continued increase is changing the nature, timing, and technology of both business-to-business (B2B) and business-to-consumer (B2C) commerce, influencing pricing, product availability, inventory holding, transportation patterns, and consumer behavior in developed economies worldwide.

Although it started relatively behind, e-commerce retail sales is playing catch-up and its growth has outpaced that of the wholesale and manufacturing sectors for 12 of the 14 years leading up to 2016. Between 2003 and 2016, retail e-commerce has averaged 17.0% annual growth, compared with 7.3% and 12.2%, respectively, for wholesale and manufacturing. In the first quarter of 2018, seasonally adjusted e-commerce retail sales grew 16.4% year on year. The share of retail sales conducted by e-commerce in 2016 was only 14.5% even when excluding sales at auto and auto parts dealers, gas stations, food and beverage stores, and restaurants-still a far cry from manufacturing's 64.8% share. But this share is rising rapidly; most recently, in the first quarter of 2018, it jumped to 17.1%. The retail e-commerce revolution is being boosted by categories of goods that have traditionally been left behind; the food and beverages category, in particular, is seeing its still-small online presence expand quickly, thanks in part to Amazon's purchase of Whole Foods. 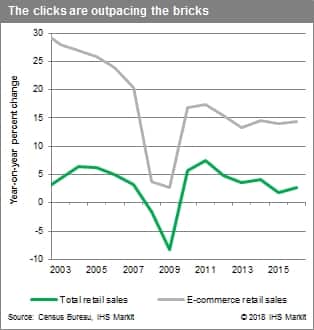 As technology, e-commerce, and globalization become more intertwined, buyers and sellers are increasing their connectivity and the speed with which they conduct sales transactions. One consequence is that businesses could maintain smaller inventories of goods on hand, as electronic sourcing and sales produce deeper markets and more flexibility in adapting to demand conditions. Historical inventory-to-sales ratios have been trending substantially downward ever since the early 1990s for both retailers and manufacturers. Between the first quarters of 1992 and 2018, the ratio of inventories to sales has decreased by 17% for manufacturers and by nearly 24% for retailers excluding auto dealers. By contrast, this ratio for wholesalers-whose business model revolves more around the logistics of storing goods-has declined by a mere 2%.

The growth of e-commerce retail sales has also reduced consumers' search cost, placed downward pressure on many consumer prices, and reduced price dispersion for many consumer goods. Consumers have benefited from sharply reduced goods prices; annual growth of the price index for US consumer commodities excluding food and energy was positive in only 2 of the 61 months since April 2013. E-commerce is clearly responsible for some of this downward pressure on inflation. It has also produced shifts in consumer shopping patterns. Between 2003 and 2017, the average amount of time Americans spent shopping on weekends and holidays fell from 0.56 of an hour to 0.46- an 18% decline.

The shift to electronic commerce is also visible in labor markets. Beginning in 2010, nonstore retail employment took off, rising from an average of 420,000 to 570,000 in 2017 with its jobs share rising to 3.6%. Over the last two years, total retail employment has roughly stalled, increasing by only 68,000 between April of 2016 and 2018, even as employment at nonstore retailers reached unprecedented highs, increasing by 62,000 over the same period-thereby making up 92% of the total sector's employment growth. These relatively few workers, who are able to process a far higher volume of transactions with the assistance of online orders and warehouses, are cannibalizing the retail sector's jobs. On the other hand, the rapid growth of e-commerce retail sales has provided a major boost to residential parcel delivery services, which are needed to get the goods into consumers' hands. Between 2012 and 2017, employment of couriers and messengers rocketed from an average of 535,000 to 685,000.

With e-commerce accounting for only 8.0% and 4.2% of retail sales and sales of services, respectively, the B2C electronic revolution still has far to go. On the B2B side, more than half of manufacturing sales are already conducted electronically; the process is much farther along. However, for both sectors, the broad shape of the consequences is clear: lower prices for goods; deeper, more efficient, and more competitive markets; and disruption for businesses that are left behind.