Please join us for the Q3 securities finance webinar on Tuesday, October 19th, where we will discuss revenue trends and will be joined by special guest Eric Lytle of Charles Schwab & Co., to discuss his views on market trends from the perspective of a US retail broker-dealer.

Global securities finance revenues totaled just over $963m in September, a 46% YoY increase. The comparison with 2020 remained favorable in September, partly owing to a particularly remunerative arbitrage related trade in EMEA. In general, return drivers which were in place for the first two months of Q3 continued to play out in September, including lockup expiries for recent IPOs; some other drivers include increased borrow demand for corporate bonds and related exchange traded products, the uptrend in APAC equity special balances and corporate action event related trades. In this note we'll discuss the drivers of September revenue, which pushed total Q3 revenues to $2.75b, a 23% YoY increase.

APAC equity finance revenues totaled $221m for September, a 71% YoY increase and the most revenue for any month YTD. The upswing in September revenues was broad based with the emerging market revenue upswing remaining in-tact, while the Japanese market benefitted from seasonal impacts.

Elevated borrow demand for Taiwan equities continues to deliver lending returns for shareholders, with $49m in September revenue reflecting a 229% YoY increase. Four of the top ten most revenue generating APAC equities are listed on the Taiwan Stock Exchange, a larger representation than any other country in the region.

Hong Kong SAR equity finance revenues totaled $52.8m for September, the most revenue for any month YTD. Most equity finance metrics showed YoY growth for the HK market, though lendable assets grew by more than loan balances causing utilization to decline. The most revenue generating HK equity in September was WH Group Ltd (288 HK), which delivered $17.8m of revenue. China Evergrande Group was the top earner in August but the decline in share price along with declining shares on loan over the last two weeks of September offset the soaring fee for borrow.

Japan equity finance revenues totaled $66.9m in September, a decline 1.9% YoY as a result of from declining loan balances and fees. Monthly returns were boosted by borrow demand around dividend record dates, an impact sufficient to make Japan the top earning equity finance market in APAC for September.

South Korea equity revenue totaled $34.6m for September, sufficient for a 206% YoY increase, though that is mostly a measure of the impact of the short sale ban in 2020. SK equity finance revenues declined by 0.9% MoM, reflecting stable, if slightly declining, specials balances.

Americas equity revenues came in at $288m for September, a 27% YoY increase, though average daily revenues declined by 4% MoM. The YoY comparison is driven by a particularly quiet September 2020, which delivered the third lowest monthly revenue of that year; the YoY comparison hurdle will present a greater challenge in Q4. America's average equity special balances declined by 11% MoM, with September having the lowest average since March when using 500bps as a cutoff for special balances. The decline in specials balances in August and September have resulted in the Americas representing only 36% of global equity special balances, the lowest ratio observed YTD.

US equity revenues came in at $262m for September, a 30% YoY increase and a 6% MoM decline in average daily revenue. The MoM decline in September is a result of less revenue related to unlocking restricted shares compared to August, when Lucid Group Inc. (LCID) and Coupang Inc. (CPNG) combined for $58m in revenue ahead of their lockup expiries. The largest contributor to September was a 2021 vintage IPO, Robinhood Markets Inc (HOOD), which was likely driven in part by an upcoming lockup expiry in late October.

Canadian equity lending revenue of $25.3m reflected a 1.6% YoY increase for September. The revenue growth was driven by a steady increase in on-loan balances throughout the month as well as a pair of dividend record dates falling in the last week of the month. CA equity specials balances averaged $674m, the highest monthly average since June.

European equity returns totaled $182.5m for September, an increase of 74.3% YoY. The soaring revenue was primarily the result of the Vivendi Se (VIV) spin-off of Universal Music Group Nv (UMG), which delivered just over $100m in September revenue, making it a likely candidate for top earning EMEA equity of 2021, taking the title from Varta Ag (VAR1) which delivered $98m in 2020 revenue. Spin-off transactions where there is a tradable security for the business being spun can be particularly lucrative for lenders given that an arbitrage trade can be achieved with access to lendable shares, so the lending revenue effectively represents a split of the profit between the arbitrageur and long shareholder. EMEA equity finance revenues would have declined by 22% YoY if the impact of lending Vivendi shares were excluded.

The surge in revenue for French equities was entirely the result of the Vivendi spin-off, as returns declined by 27% YoY in September excluding that trade. UK equity revenues declined by 6.4% YoY, with the top earner continuing to be Tui Ag; shares for the travel and tourism firm are partly impacted by the firm's convertible bond, which helps to explain the dip in borrow demand in early September, when the equity share price declined, and an increase in borrow demand as the share price rallied over the last two weeks of the month (borrow demand for convertible hedges generally has a positive correlation to share price, as value in the embedded call option increases with the share price).

Global ETP revenues totaled $52m for September, a 67% YoY increase. Despite the strong YoY comparison, it's worth noting that revenues were essentially flat MoM, declining by 0.6%. The ETP lendable asset value set a new all-time monthly average high of $488bn; however, YoY loan balance growth has kept utilization well above 2020 levels since June. Revenues for fixed income products decreased by 9% MoM, a result partly driven by declining fees and loan balances for the iShares iBoxx $ Investment Grade Corporate Bond Fund (LQD). The most revenue generating exchange traded product continues to be the iShares iBoxx $ High Yield Corporate Bond Fund (HYG), which returned more than double the next ranked product. The Ark Innovation ETF (ARKK) continues to deliver lending revenue for investors, with borrow costs increasing in September partly as a result of the funds holding of Robinhood shares. ETP specials balances were steady in September, with an average on-loan balance with a fee greater than 500bps averaging $1.28bn, a decline of 2.3% MoM. 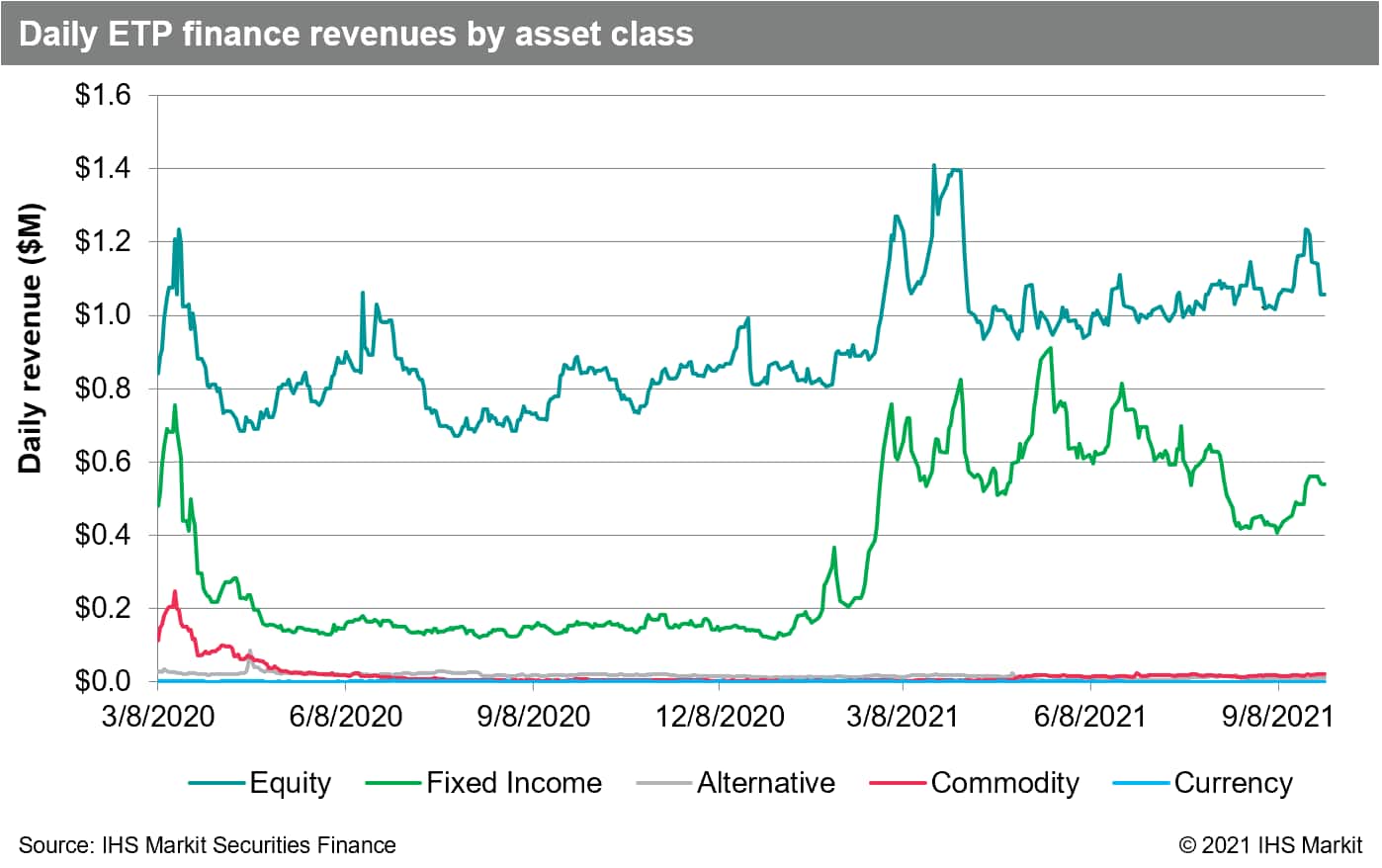 The uptrend in corporate bond finance revenues remained in place through September, which delivered the most monthly revenue YTD, $47.4m, a 46% YoY increase. Corporate loan balances averaged $257b in September, an increase of 49% YoY and the largest monthly average balance YTD.

Chinese property development firms have seen cross-over borrow demand for equity and credit, notably including China Evergrande Group, though the revenue for lending bonds issued by Evergrande has been subdued by the decline in the value of bonds on loan driven both by lower prices and a declining face value on loan. One Chinese developer whose bonds trade closer to par yielded one of the top five most revenue generating corporates for September, Shimao Group Holdings. 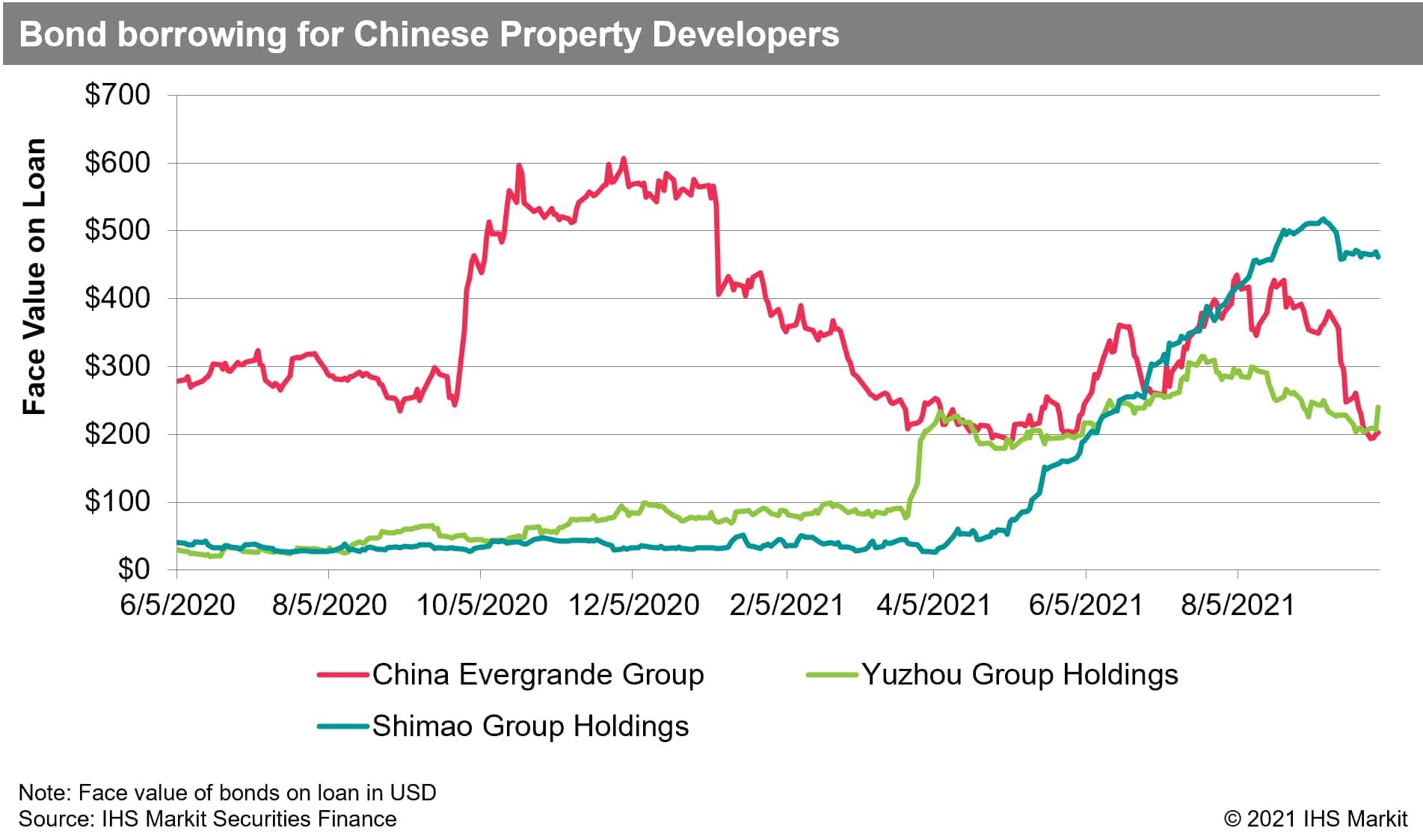 Global securities finance revenues increased by 46% YoY in September, the largest percentage gain YTD. The solid September came after August, which delivered the 2nd largest YoY increase. The YoY comparisons are driven by a relatively quiet period in markets at the end of summer 2020, but the relative upswing is welcomed regardless. EMEA equity finance revenues suffered a lack of specials during the summer; however, the Vivendi spin-off was a blockbuster and a perfect example of a trade which could justify participating in a lending program even if only for special one-off opportunities. Lock-up expiries continued to play a role in September, as reflected on the leader board for US equity revenue generators, and that's likely to remain a driver with expiries coming up in October. The usage of exchange traded products in institutional long portfolios and for short hedges continues to boost returns, though demand for some fixed income products has declined. Borrow demand for corporate bonds continues to increase with six consecutive months of YoY increases in intrinsic income, with September having the most monthly revenue YTD. With drivers of lending returns from the first half of the year continue to play out along with some new themes, Q3 concluded with $2.75bn in global financing revenue, a 23% YoY revenue increase.