Russia and Ukraine are engaged in a high-intensity but indecisive war of attrition in Donbas. Ukrainian forces are likely to fall back to prepared defensive positions near Bakhmut, Kramatorsk and Sloviansk, all in the Donetsk region. Ukrainians' ability to defend these key positions in Donetsk will depend on the ability to deploy new weapons transferred by the US, UK, Poland, and other allies. Russia is within reach of capturing the entire Luhansk region of Ukraine in coming weeks. 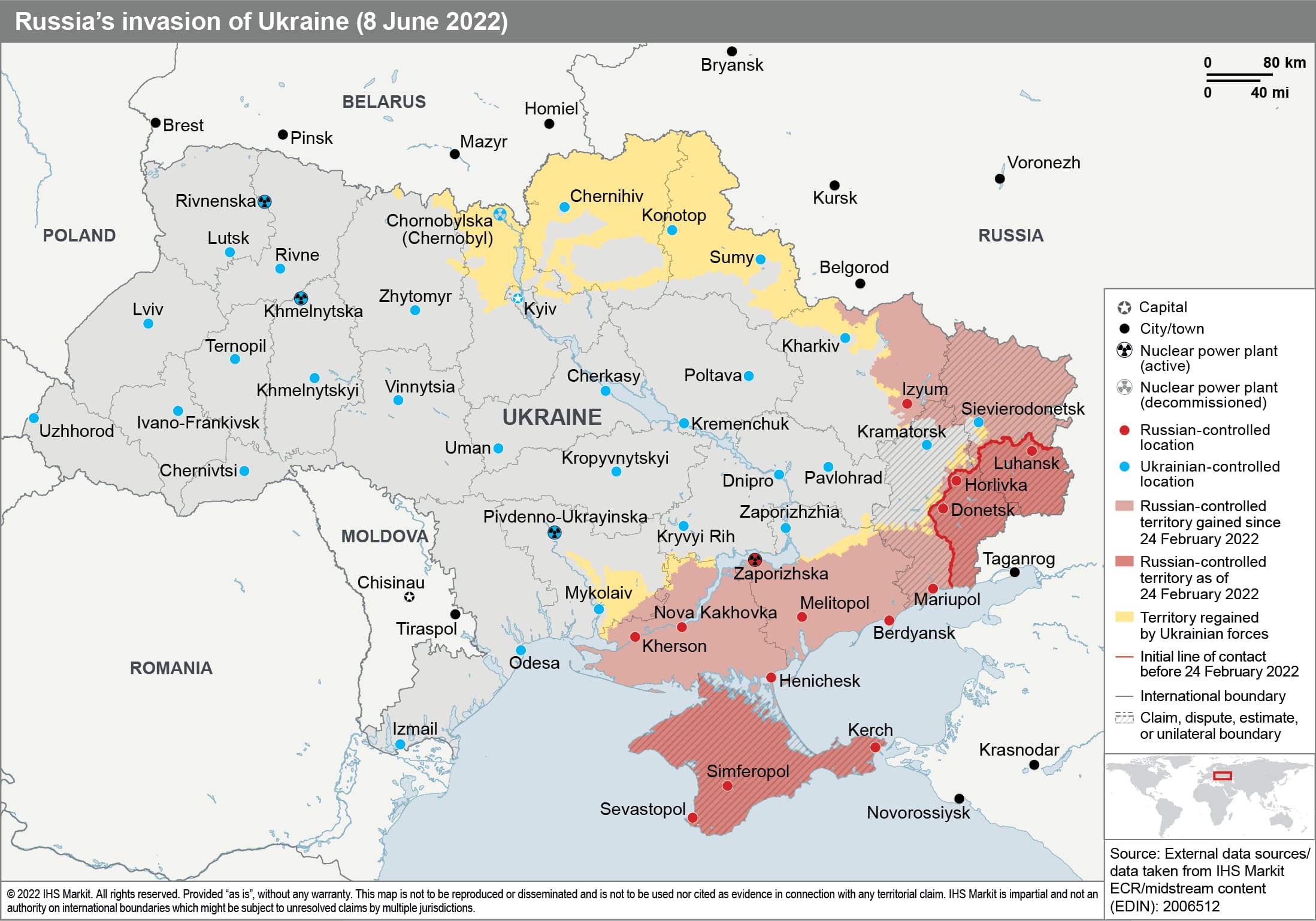 The European Council - comprising the heads of states and governments of the 27 European Union member states - has adopted a sixth package of sanctions against Russia. This latest round of sanctions will restrict about 90% of Russian oil imports into the EU. Increasing intra-EU frictions over the bloc's response to the war in Ukraine are likely to continue to cause delays in advancing further sanctions in the one-year outlook.

Sanctions continue to weigh on Russia's financial sector. Russian lender Sberbank's subsidiary in Kazakhstan is the subject of talks for its sale to Kazakh financial holding company Baiterek, Reuters has reported, citing undisclosed sources. Baiterek is state-owned, with the Kazakhstan Development Bank falling under its ownership.

Pre-existing vulnerabilities in emerging European banking sectors could be amplified by a further escalation or sanctioning of the Russia-Ukraine war. Shocks in growth or inflation, or a revival in COVID-19 infections could prompt tighter macroprudential policy in the near term and also impact these sectors. Increased lending to the micro, small, and medium-sized enterprise (MSME) segment in mainland China and edged up impairment ratios at banks in Latin America could also be on the horizon.

The ongoing effects of the Russia-Ukraine conflict on the prices of key commodities, such as energy and agricultural products, are contributing to exceptionally elevated inflation rates in the eurozone in recent months. Those effects are likely to continue in the near term.

The industrial growth outlook in Europe faces challenges from continued supply chain disruptions, exacerbated by the war's impact on transportation, prices, and availability of inputs as well as weakening demand and higher risk aversion.

The EU has published its REPowerEU plan, which sets out measures aimed at discontinuing imports of fossil fuel from Russia to the EU in response to the Russian invasion of Ukraine. The policy would accelerate its reduction in energy consumption and focus on alternative forms of energy, including hydrogen and liquefied natural gas.

Read through to China

A key cause in the drop seen in global manufacturing output in May was a sharp downturn in factory production within mainland China for a third successive month, exacerbated in Europe by the Ukraine war. China's reported output drop in May was the third-quickest recorded since the height of the global financial crisis, reflecting ongoing efforts by the Chinese authorities to contain the spread of COVID-19.

Mainland China's pandemic situation is stabilizing and lockdown restrictions are easing across the geography. The Chinese economy is expected to recover in June. The "dynamic zero-COVID" policy, slowing income growth, and weakening global economy will continue to pose risks for mainland China's economic recovery.

What we're watching for: