Recessions in Europe: How deep and how long?

The imminent recessions we expect in the eurozone and European Union are forecast to be relatively short and sharp.

Our baseline forecast incorporates two-quarter recessions in the eurozone and EU during the fourth quarter of 2022 and first quarter of 2023. We expect cumulative real GDP losses to exceed 1%, driven primarily by weakness in private consumption as soaring inflation hammers household real incomes.

Energy shortages due to unusually cold weather could lead to much deeper near-term output contractions than forecast, concentrated in the industrial sector. Weakness in investment is also expected given tightening financial conditions and increased uncertainty over the outlook for demand. Exports are forecast to weaken following deteriorating growth prospects in key export markets including the United States and the United Kingdom. Both are expected to enter recessions shortly.

Given the material risk of larger and/or longer recessions in Europe, we provide two alternative scenarios run through our Global Link Model off October's baseline. These result in significantly larger real GDP contractions in the eurozone and EU, albeit via different routes. 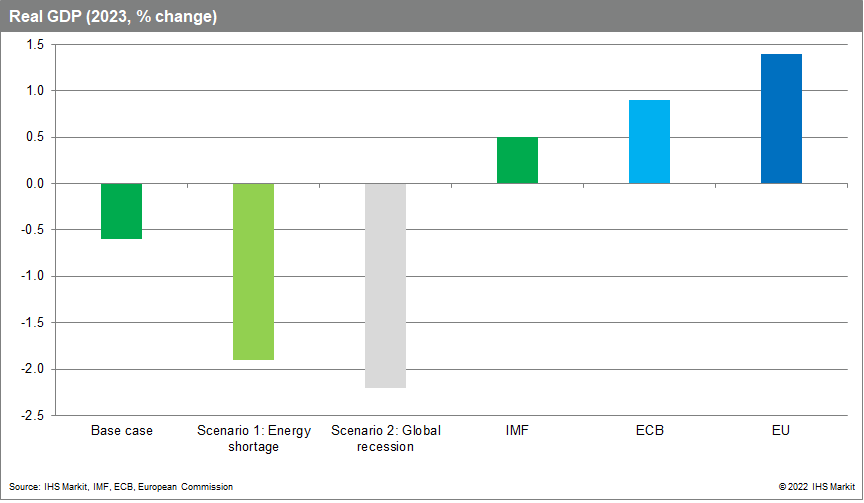 In their base case, our energy experts do not expect a shortage of gas in Europe this winter. This reflects factors including evidence that some demand destruction has already taken place, encouraging data on storage levels, and alternative sources of supply including rising liquefied natural gas (LNG) imports.

A sustained drop in temperatures would materially change their assessment. In such a scenario, energy rationing would most likely follow, centered on the industrial sector.

Energy prices in this scenario are kept higher for longer than in our base case and supply shortages weigh heavily on industrial production. The implied recession in the eurozone is still relatively short, lasting from the fourth quarter of 2022 to the first quarter of 2023, but output losses are much larger.

The estimated cumulative real GDP contraction over the two quarters is close to 3%. Even with a stronger rebound than in our base case, the implied annual contraction in eurozone real GDP in 2023 is around one percentage point lower.

Recessions in the eurozone industrial sector tend to be more frequent, and larger, than real GDP recessions. The length and depth of industrial recessions are also influenced by periods of financial stress, with the contraction in production during the global financial crisis even larger than during the initial COVID-19 shock, at almost 20%.

In Scenario 2, the quarter-over-quarter real GDP declines in the eurozone continue for an additional quarter out to the second quarter of 2023, with the cumulative contraction exceeding 3%. Again, even with a subsequent strong rebound, the estimated annual contraction in eurozone real GDP in 2023 is well over one percentage point below our base case at around 2%.

Our base case and both alternative Global Link Model scenarios incorporate rebounds in eurozone and EU growth during 2023, albeit a rather muted one in the former. A key driver is expected moderations in energy prices. There are various downside risks to these expected rebounds including:

To reflect the first issue, in our base case we incorporate a soft patch in the eurozone and EU recoveries during winter 2023-24. Real GDP growth is expected to stall in the first quarter of 2024, although a double-dip recession is also possible. The soft patch is not incorporated into either GLM scenario, indicative of further downside risk to the projected real GDP outcomes in 2023-24.

We do expect a vigorous pick-up in growth from the second quarter of 2024 onwards. By that point, consumer price inflation is expected to have fallen markedly, supporting household real incomes and spending. Central bank policy is also forecast to be in easing mode by then, given improving inflation prospects.