Both the insurgent Government of Tigray (GoT) and the Ethiopian government claimed on 24 August that the other had launched an offensive operation against them in the early morning, accusing them of violating the (otherwise largely observed) ceasefire declared in March 2022. The claims by both insurgents and media indicate that the fighting was in or near Southern Tigray zone and the nearby town of Kobo (North Wollo zone, Amhara region) and involved Ethiopian National Defense Force (ENDF) and Amhara regional troops on the pro-government side. 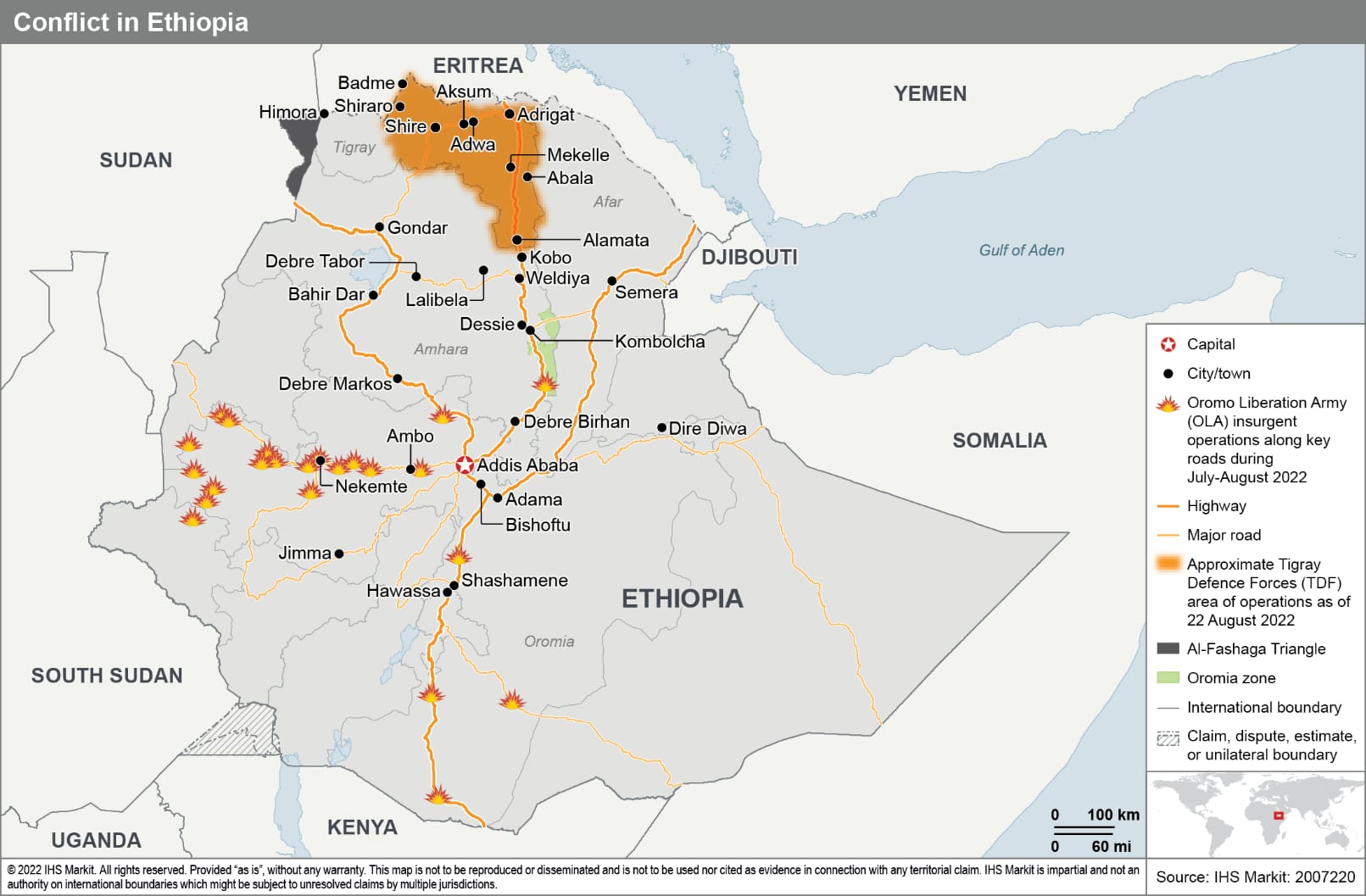 There is an increased risk of a resumption of heavy fighting - including the use of artillery, tanks, and Grad-style rockets - along all lines of contact between Tigray Defense Forces (TDF) and pro-government forces.

The resumption of ENDF airstrikes, including military unmanned aerial vehicles (UAVs), would also be probable in the event of re-escalation. Fighting would most likely be concentrated along the border between Western and North Western Tigray zones; in the border areas of Tigray and Amhara region's North Gondar, Wag Hemra, and North Wollo zones, especially near major roads; along Tigray's border with Afar region's Abala, Megale, Yallo, Gulina, and Erebti districts; and near Eritrea's border with Tigray's North Western, Central, and Eastern zones. A quick and decisive military victory by either side would be unlikely. A TDF statement on 24 August indicated that it would initiate an offensive to "liberate" Western Tigray zone if pro-government forces did not end their alleged offensive

If fighting continues and expands geographically, the perception of international partners regarding which party is responsible is likely to significantly affect the Ethiopian government's prospects for renewed financial assistance.

If international partners blame the GoT/TDF for the renewed fighting, this would likely decrease pressure on the Ethiopian government to restore even minimal basic services to GoT/TDF-controlled territory, and increase the likelihood of a new International Monetary Fund (IMF) support package for Ethiopia being announced before the end of 2022 as well as increased bilateral assistance. The United Nations' World Food Programme (WFP) has stated that, on the morning of 24 August, TDF fighters "forcefully entered" WFP warehouses in Mekelle and seized 12 tankers carrying 570,000 liters of fuel intended for the distribution of humanitarian aid. The TDF targeting, and likely significantly disrupting, humanitarian operations in this manner will likely draw a negative reaction from Ethiopia's international partners.

In contrast, if the partners blame the Ethiopian government, then existing bilateral assistance is likely to be cut to a minimum level of humanitarian aid, and new engagement with the IMF will be delayed until the government reaches a new ceasefire and makes substantial concessions to the GoT/TDF, such as a full withdrawal from Western Tigray zone and allowing the unimpeded resumption of basic services. However, probable difficulty in quickly determining the precise events around the commencement of fighting on 24 August, combined with the mutual allegations of responsibility, will likely cause international partners of the Ethiopian government to prioritize pressuring both sides to de-escalate and adopt a new ceasefire, rather than immediately assigning blame.