Construction and real estate in Saudi Arabia, the United Arab Emirates, and Qatar — sectors that are critical to the diversification of these economies away from hydrocarbons — are recovering from challenges posed by COVID-19 lockdowns.

The revenue windfall from high hydrocarbon prices is expected to carry the construction-sector performance in the remainder of 2022 and 2023. The UAE, Qatar, and Saudi Arabia are expected to experience healthy total construction growth, estimated at 6.8%, 6.3%, and 5.6%, respectively, in 2022. Moving into 2023, all three countries will likely continue to enjoy high construction growth rates, although Saudi Arabia is expected to overtake the two countries, posting growth of 6.8% while Qatar and the UAE both increase at 5.6%. 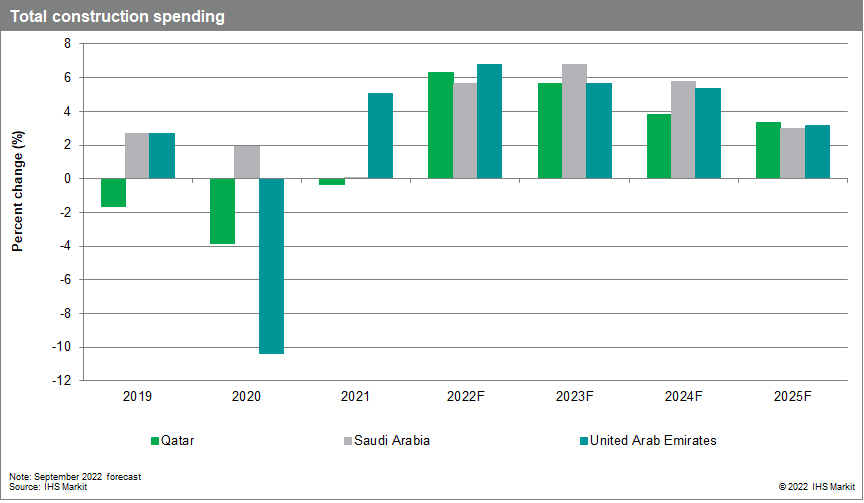 Relatively high consumer prices and tighter global financing conditions are unlikely to slow the trend down markedly. The key constraint for the performance of these sectors is likely to emerge on the supply side of the construction materials market and the market for construction workers. Demand for both is expected to surge, especially in Saudi Arabia, where several megaprojects will likely face delays as construction materials are increasingly in scarce supply.

Construction-sector results for the first quarter of 2022 have been disappointing in Saudi Arabia (and also likely in the UAE) as the sector has been caught up in the downturn during the COVID-19-induced lockdown in 2020 and 2021. A large number of foreign workers, who account for the bulk of the sector's workforce, returned to their home countries when the pandemic broke out and have been coming back, albeit more slowly.

Sectoral performance improved in the second quarter of 2022 as construction's gross value added in Saudi Arabia was estimated to have leaped by 8.0% in the quarter, seasonally adjusted. That result, combined with extremely strong growth of fixed investment, with capital spending for planned megaprojects being released on top of the sectoral recovery, convinced us to raise the outlook for construction-sector output for 2022 and 2023.

Most of the megaprojects in Saudi Arabia will become large tourist attractions, which will trigger further multiplier effects for construction-sector spending in the form of accommodation, amenities, and other infrastructure. Therefore, tourism, construction, and real estate, among other sectors, will be boosted by the large-scale projects, which are in line with the kingdom's revenue diversification goal.

Qatar's high total construction growth has been driven in part by preparations underway for the 2022 FIFA World Cup. The Qatari economy is estimated to have spent over 60 times more than what South Africa had spent during its 2010 World Cup.

The question of post-world cup usage of stadiums and hotel rooms lingers. While the risk could be partly offset by prospects of further tourism and hospitality in the next few years, especially in case of a successful World Cup hosting, the pace of construction and infrastructure spending is likely to decelerate markedly, relative to the pre-World Cup 2022 period.

We assess that the Qatari economy's main strength this decade, after the World Cup event, remains the expected massive expansion of gas production capacity through the North Field expansion, which should see gas production capacity boosted by more than 60% by 2027. It is likely to fuel an economic activity expansion, especially as fast-growing and European economies seeking to replace Russian gas supplies will be eyeing new gas output of the Gulf country.