Not a Recession for the US—Yet

On 28 July, the Bureau of Economic Analysis (BEA) will publish its first estimate of real Gross Domestic Product (GDP) for the second quarter (Q2) of this year. The July 10 "Blue Chip" consensus is that GDP grew at a 1.1% annual rate in Q2. However, based on the most recent data, S&P Global Market Intelligence estimates that GDP fell 1.8% during the quarter. This would follow the first-quarter contraction of 1.6% already reported by the BEA, thereby satisfying the popular definition of a recession: two consecutive quarterly declines in real GDP.

In the US, the "official" arbiter of recessions is the Business Cycle Dating Committee of the National Bureau of Economic Research. In its deliberation—which, for this episode, is months off—the Committee will consider several economic indicators besides GDP. These include monthly data on industrial production, employment, hours worked, and real personal incomes excluding social benefits paid by government to households, all of which grew over the first half of the year. So, while this episode might become a recession, it doesn't look like an official one—yet!

Nevertheless, inflation is intolerably high, unemployment unsustainably low, and inflation expectations have crept worrisomely above the Federal Reserve's long-run 2% objective. While recent commodity price pressures will ease or, in some cases, reverse as supply chain bottlenecks are cleared, an increase in unemployment will be required to mitigate persistent inflation pressures originating in today's extraordinarily tight labor markets. The Federal Reserve tacitly acknowledged this when, following its June meeting, the Federal Open Market Committee, which sets US monetary policy and has clearly signaled its intention to raise interest rates aggressively, dropped its previous references to this policy being consistent with strong labor markets. 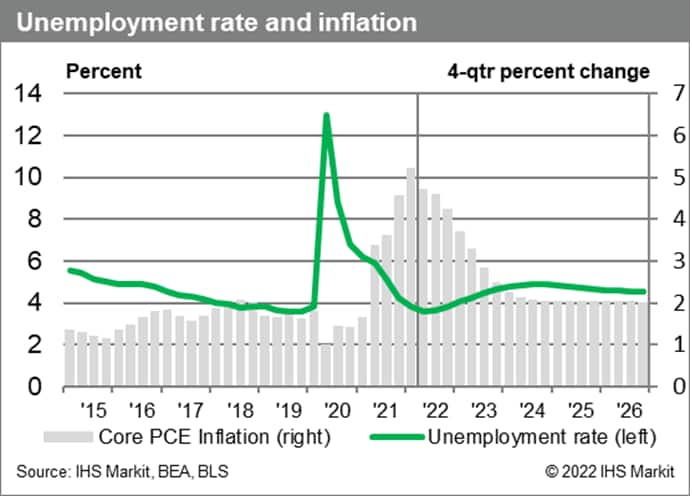 In response, we've lowered our forecast of GDP growth for 2022 from 2.5% to 1.4%, and for 2023 from 1.8% to 1.3%—for both years, below the 2% growth of "full-employment" GDP. Consequently, we expect the unemployment rate to rise 1.3 percentage points, from the current 3.6% to a peak of 4.9% by the end of 2024. We characterize this period as a "growth recession," and expect the consequent easing of labor market conditions will prove sufficient to lower inflation back close to 2%.

Unfortunately, this view may also prove optimistic because the historical experience is this: since the mid-1960s, the unemployment rate hasn't risen 1.3 percentage points without then rising further, oft times a good deal further. And that would make a recession…official.