Worries about inflation led to a further tightening of financial conditions in the week ending June 10.

Fed tightening intended to lower inflation will slow the economy through tighter financial conditions: lower stock prices, higher bond yields, wider risk spreads, and a strong dollar. Some effects are already being felt in the housing sector, where home sales have fallen, homebuilder sentiment has softened, mortgage applications have declined sharply, and some indicators of home construction activity have declined. 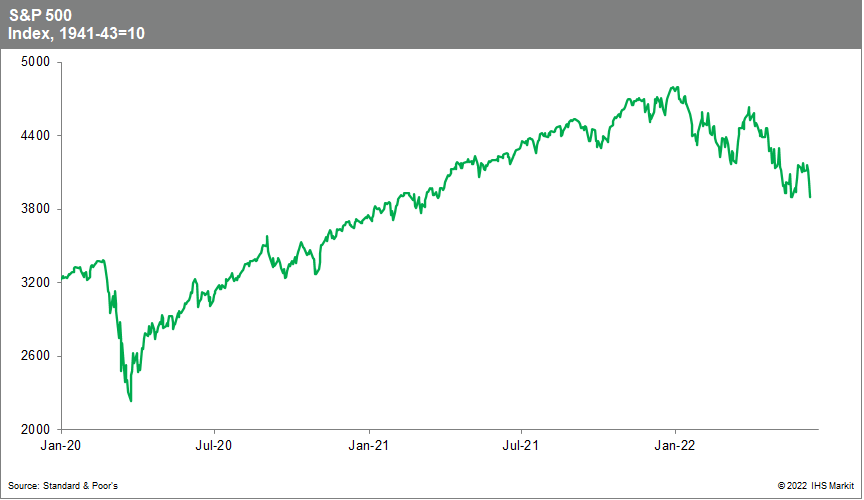 The dollar appreciated against the euro even though the European Central Bank said that it planned to begin raising interest rates next month. Earlier and more aggressive tightening by the Fed supports a strong dollar. (Europe is also more vulnerable to sharp increases in energy prices stemming from Russia's invasion of Ukraine.)

We anticipate that GDP will continue to expand, albeit at a much more moderate pace on average than last year. In response to data published after this forecast was prepared, especially the Quarterly Services Survey for the first quarter, we lowered our forecast of growth averaged over the first two quarters to show a slight decline.

CPI moves in May

Inflation remains very high following some easing in prices for nonfood, nonenergy goods that rose sharply in the past, such as used motor vehicles. As of May, 12-month changes for the overall and core CPIs were 8.6% and 6.0%, respectively. Inflation within core services continues to heat up (to 5.2% in May), driven in part by accelerating rents. Core goods inflation has declined from its recent peak yet remains very high (8.5%).

The CPI rose 1.0% in May. The core CPI, which excludes the direct effects of moves in food and energy prices, rose 0.6% for the second consecutive month. The headline CPI was boosted by price increases for food (1.2%) and energy (3.9%).

Consumers have been feeling the pain at the grocery store this year. Prices for food at home have increased at or above 1.0% every month so far this year. The 12-month change in the CPI for food at home rose 1.1 percentage points to 11.9% in May, the highest since April 1979. 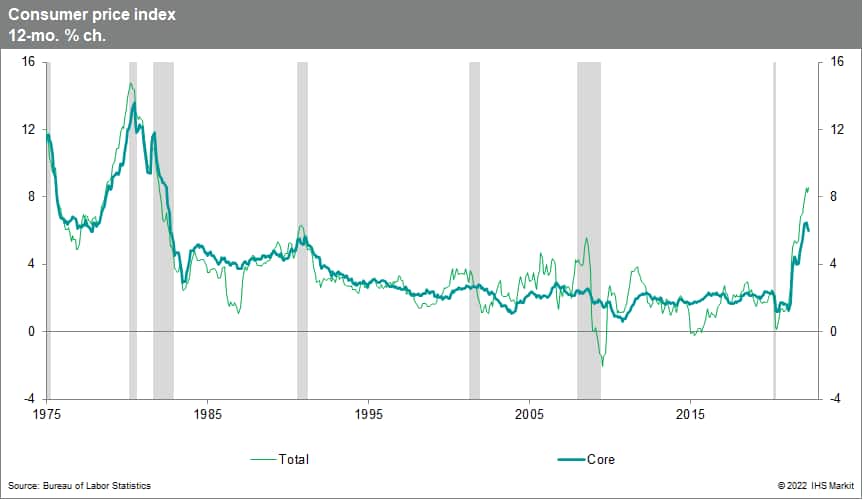 A quick rebound in rent inflation has contributed to the rise of services inflation. Owners' equivalent rent (OER) and rent of primary residence (RPR) each rose a robust 0.6% in May. Twelve-month changes in OER (5.1%) and RPR (5.2%) as of May are up sharply from 2.0% and 1.8%, respectively, in April 2021.

FOMC likely to push rates up

The FOMC will likely push interest rates above what it interprets as a neutral level beginning in the fourth quarter of 2022, with further rate increases on tap heading into early 2023. We expect the upper end of the target range for the federal funds rate to rise to 3¼% by early next year. It is likely to remain at that level until 2024, at which time (we project) inflation will be well on the way to averaging 2% on a sustainable basis.

As part of its pivot to tighter policy, this month the Fed is beginning to shrink its bond portfolio according to the plan it announced in May. The pace of shrinkage will roughly double beginning in September to up to $95 billion per month. Fed shrinkage reinforces upward pressure on bond yields and should be well anticipated by participants in bond markets.