India's exports of oil products in August totaled 4.53 million mt, largely stable from July volumes, although outflows of gasoil and diesel surged 12% to 2.6 million mt, or roughly 616,000 b/d, as a slower recovery in manufacturing activity along with fears over a third wave of COVID-19 cases weighs on domestic demand.

Latest data from IHS Markit Commodities at Sea shows 42 cargoes of gasoil and diesel exported in August, with more than half or nearly 1.6 million mt, loading from Reliance's Jamnagar terminal, although the refiner's exports are down from an average 1.93 million mt each in May and June.

The top recipient of India's August gasoil cargoes is South Africa, with nearly 200,000 mt of gasoil already discharged and another 200,000 mt plus en route. If all are discharged, this would be a new record for Indian gasoil going to South Africa - with 80% of the volumes shipped by private refiners Nayara Energy and Reliance.

South Africa has ramped up product imports due to issues at its refineries. The 125,000 b/d Engen refinery in Durban is being converted into an import terminal while the 110,000 b/d Astron refinery in Cape Town remains offline following an explosion last year. Sapref, the largest refinery, also located in Durban, had to suspend operations and declared force majeure on output in the first week of July following civil unrest, but is understood to have restarted earlier in August.

With higher flows to Africa, total gasoil exports to Northwest Europe and the Mediterranean slipped to under 570,000 mt, from nearly 605,000 mt in July, according to the data.

Compared with gasoline, diesel demand is likely to perform more moderately in the current quarter, with industrial and manufacturing activity slower to recover. Data from India's Petroleum Planning and Analysis Cell (PPAC) showed that gasoil production in July hit the highest since March, at 8.98 million mt although consumption slipped 1% in July from June to 6.14 million mt. India's refineries are configured to produce the most diesel out of all key oil products, so exports could remain high in the coming months.

Conversely, exports of gasoline, including blend stocks like reformate, fell 11% on month in August to 926,400 mt, the first time since April that volumes were below 1 million mt. The market had been anticipating lower exports from India due to a recovery in domestic demand on higher mobility trends. As well, more people are opting to commute in personal vehicles rather than public transport, boosting new car sales.

Reliance was responsible for over 80% of India's gasoline outflows last month, with its volumes largely stable from July. and the rest came from Nayara Energy.

Jet fuel demand remains a laggard in the country, and output has also been constrained as a result. While domestic travel has improved, international flights remain restricted, with further suspensions now in place until the end of September, according to the civil aviation authority. PPAC data showed jet fuel output in July declined more than 10% from June to just over 600,000 mt, although kerosene output rebounded to 195,000 mt.

With the second wave of COVID-19 cases easing, third quarter oil demand is improving and estimated to reach 4.4 million b/d, up 100,000 b/d from Q2, according to IHS Markit. Real GDP is expected to grow 7.7% in fiscal year 2021. Rising infections in some states however are prompting fears that a third wave is emerging. 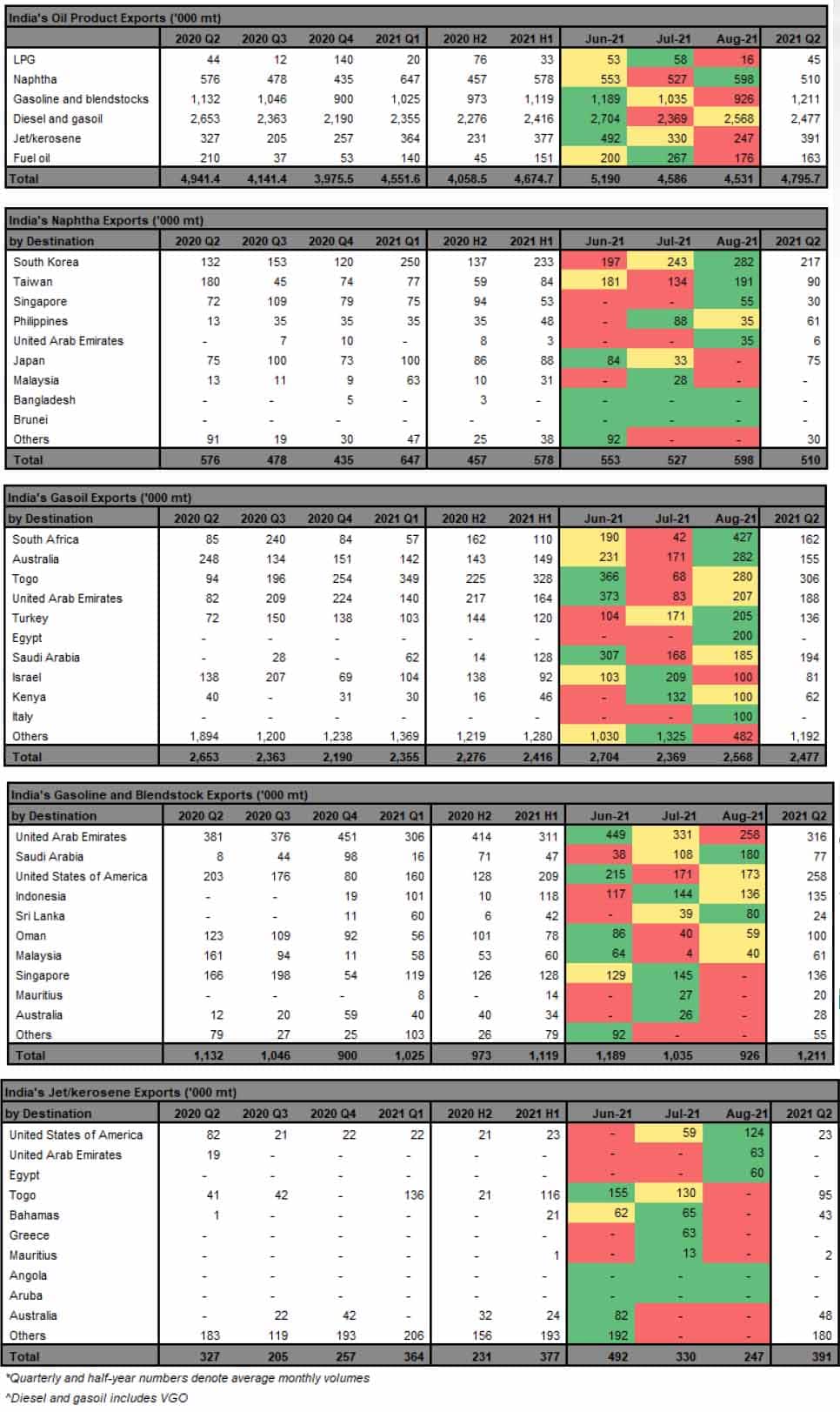 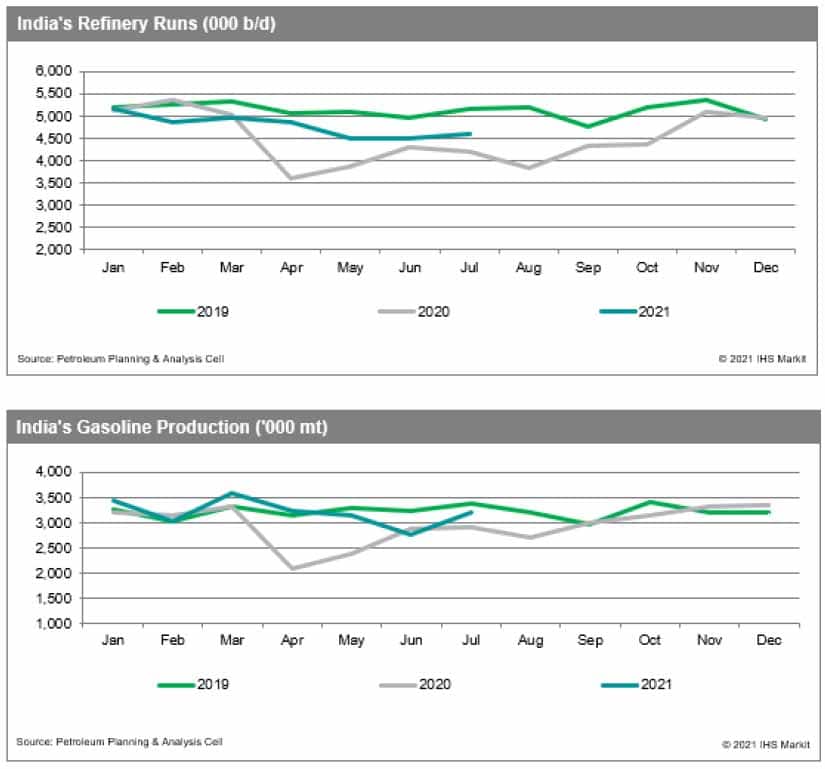 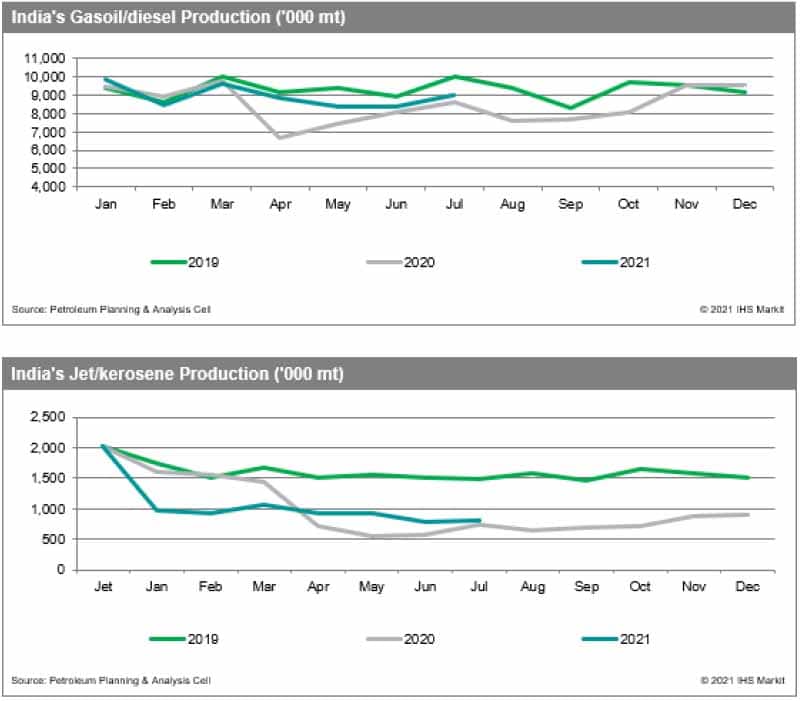