Over the last few days, the response of countries and companies to the Russian aggression on Ukraine is widely discussed. Economic sanctions on Russia imposed by global players, such as the United States (US), the European Union (EU), Japan, and South Korea are already severe and are expected to be augmented presently. In comparison to sanctions imposed after the Crimea invasion in 2014, which concerned primarily the energy sector, technology transfer, and financial measures (e.g., asset freezing), the recent response is likely to impact international trade of the Russian Federation even heavier.

Due to the Russia-Ukraine war, the Russian Federation is facing tremendous multi-level economic sanctions. Some of them, such as suspension of serving Russian markets by shipping companies, immediate exit from the market, or refusal to sell Russian products, together with customers' boycotts are seen for the first time on such scale.

In the short and medium-term, we expect Russian exports and imports to significantly decrease, the fall however will differ depending on the industry and transport mode. We believe that the duration and extent of the drop in Russian international trade will not be lower than in the case of the Crimea invasion in 2014. The incident amounted to 40% drop in exports and the decay of the shock took about five years.

In the long-term, we expect that the Russian economy can strengthen the links with mainland China, its largest trade partner. On the other hand, we believe that mainland China is not able to absorb the whole sanctions-related trade shift.

Overview of the Russian international trade

Typically for the natural resource-abundant country, over the last years, Russia has a significant trade surplus, ranging between 10-34% in the 2002-2021 period. Both Russian exports and imports showed an increasing trend before the 2008 financial crisis followed by a volatile, horizontal trend afterward, with the highest value in 2013. In line with recent GTAS Forecasting data, in 2021 Russia was the 12th largest exporter and 21st importer in the world. 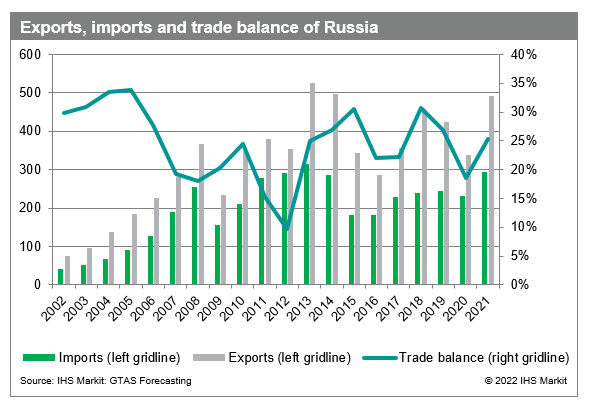 From the commodity perspective, Russian exports are generally dependent on natural resources. In 2021, the most important exported products were 'crude oil' (26% of the total value of exports) and 'refined petroleum products' (15% of the total value of exports). These commodities are followed by 'precious metals', 'coal and coke', or 'natural gas, petroleum gases, and gaseous hydrocarbons'. Listed above, the top 5 commodities were responsible for over half of total Russian exports in 2021. 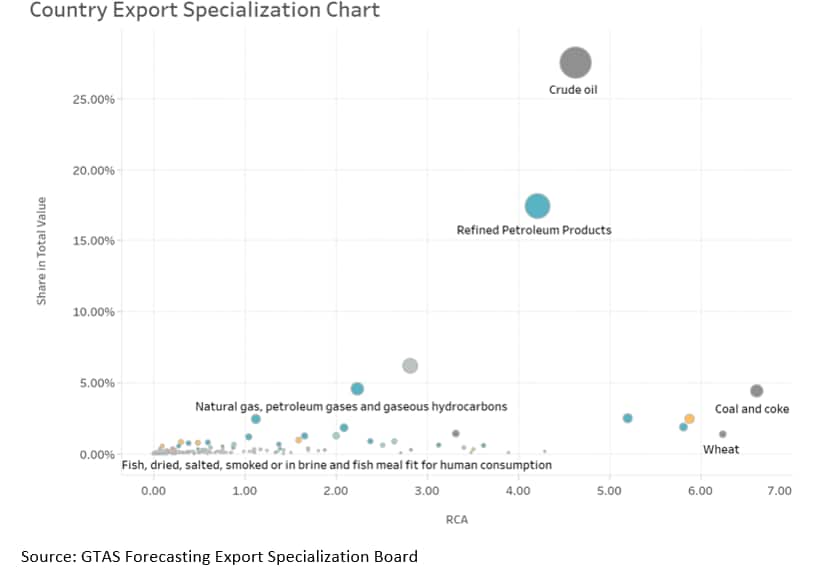 The importance of listed commodities is revealed in the Global Trade Analytics Suite (GTAS) Forecasting Export Specialization Dashboard, which is available for all the subscribed GTAS Forecasting users. Once again, the most important product groups - also in terms of real value (with the highest share in total trade of certain commodities and revealed comparative advantage index - RCA) are 'crude oil', 'refined petroleum products', 'natural gas, petroleum gases, and gaseous hydrocarbons'. and 'coal and coke'.

From the transport mode perspective, the majority of Russian exports are transported by sea and land transport (pipelines included). In 2021 over 57% of total exports were related to seaborne trade, 36% was transported by land. The remaining 6% is transported by air. This proportion is generally constant over the last years. 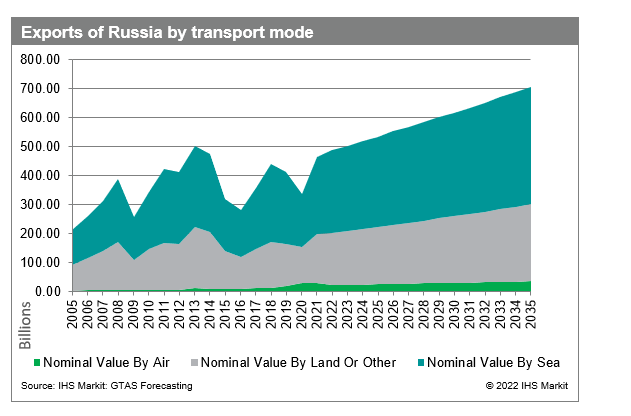 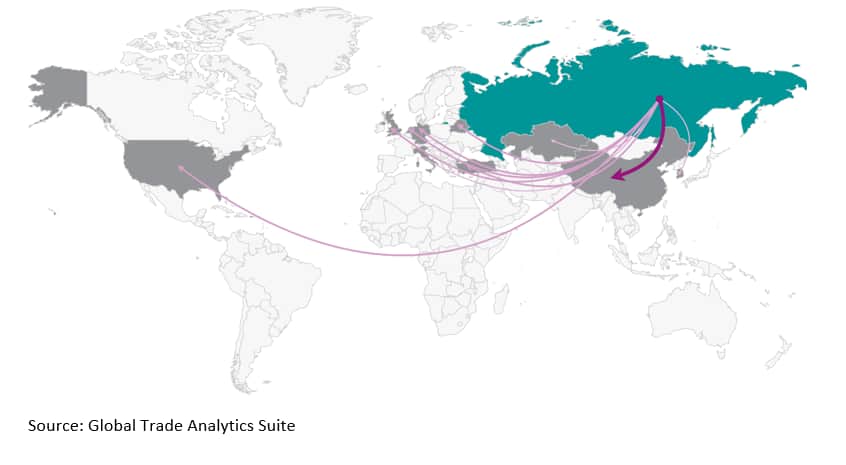 As for Russian imports, again the main trade partners are mainland China (USD 73 Billion, 25% of total), Germany, the US, Belarus, South Korea, France, Italy, Japan, Kazakhstan, and Turkey. In the case of imports, Russian trade is even more concentrated in the top 10, which amounts to 66% of total imports in 2021 in line with GTAS data. 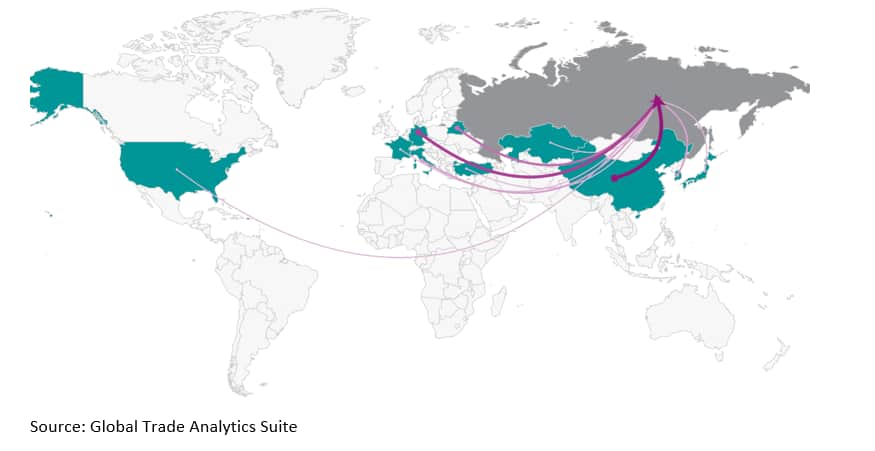 In comparison to the Crimea invasion, the impact of sanctions on Russia's international trade is expected to be significantly heavier. The response to the Russian invasion of Crimea in 2014 was an industry or individually targeted and limited primarily to three areas - technology transfer, energy sector, and financial sanctions, which resulted in deteriorating ratings, capital outflow, and strong currency depreciation. The above, together with decreasing prices of crude oil among others induced a financial crisis in Russia. The crisis transferred to the balance of payment, with the highest exports dropping in January 2015 exceeding 40% year-to-year. From the trade perspective, the consequences of the Russian crisis held back the return of the value of exports until 2020, which means that it affected trade for the next five years. 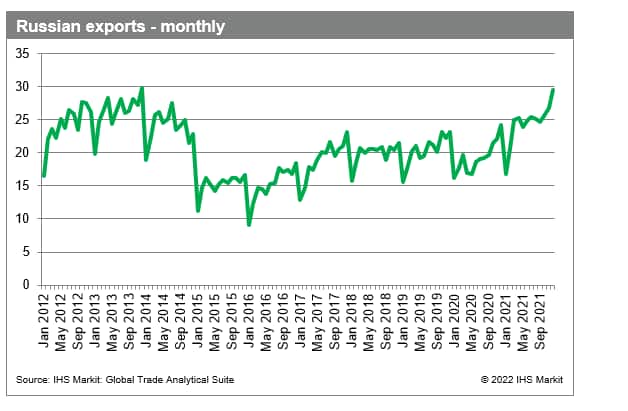 Clearly, this time, international trade in Russia will be affected on several parallel levels. First of all, trade restrictions for several commodities will certainly affect Russian trade directly. On the import side, sanctions concern primarily high technology and dual-use goods or technology transfer, especially in the energy, transportation, space, and aviation sectors. On the export side, applied measures are to a large extent company oriented. For example, the EU is blocked from doing business with Kamaz (trucks) Russian Railways, Sovcomflot (shipping), or United Shipbuilding Corporation (shipbuilding) among others.

The country-level measures were reinforced by firm-level measures, related to both, the resignation of doing business in Russian companies, serving the Russian market, or foreign direct investment (FDI) withdrawal. For example, the largest aircraft producers - Boeing, Airbus, and Embraer - announced to suspend the Russian market from new aircraft and its parts. Similar decisions have been made by Intel, AMD, and Lenovo in the computer industry, Volkswagen, General Motors, and Volvo in the automotive sector. Additionally, Daimler announced cutting its business linkages with Kamaz. Several oil companies, such as British Petroleum, Shell, and Exxon Mobile decided to exit operations in Russia or sell their subsidiaries. Several European retailers announced the suspension of Russian products' selling (Rossman, Netto). The list of withdrawing companies constantly extends, containing a wide range of industries, including entertainment (Disney, Spotify), culture, and sports events (Eurovision, Paralympics, FIFA, UEFA).

Moreover, it is observed that strong depreciation (nearly 30% - from 83.52 RUB/USD on 27 February 2022 to 108.51 RUB/USD on 1 March 2022) is expected to hit Russian international trade directly, similarly to the Crimea invasion. Additionally, as a result, the interest rate has been doubled by the central bank to 20%, impeding access to credit, which can impact trade indirectly.

Furthermore, financial sanctions, including disconnection from the Society of Worldwide Interbank Financial Communication (SWIFT) system, can interfere with international trade-related payments, which in turn can raise trade uncertainty and disturb deliveries, negatively affecting both Russian exports and imports.

Lastly, Russian goods and services are expected to be boycotted by customers around the world, which primarily concerns fast-moving consumer goods (FMCG). The extent of the impact is still unknown, as it is the first time we have observed such customer-level sanctions on such a scale.

The above measures will be strengthened by the announced transport and logistics impediments. As of 2 March 2022,, Maersk, MSC, CMA CGM, and Hapag Lloyd announced a temporary suspension of booking to and from Russia. On the other hand, airborne trade will be certainly decreased due to closing of airspace for Russian airlines in the EU, the US, Canada, and others.

Taking the above into consideration, the overall impact of the Russian aggression on Ukraine is complex, especially since some forms of sanctions, such as broadly announced refusals to serve the Russian market or customers' boycotts have been observed for the first time on such a scale. It is extremely difficult to estimate quantitative implications at this point due to the lack of recent data. This situation can change however with initial trade data in the forthcoming weeks.

Clearly, the drop in trade of Russia - both, imports and exports - has the potential to exceed the fall attributed to the 2014/2015 crisis. Namely, in the short-term, the decrease of international trade of the Russian Federation may significantly exceed 40%.

At the same time, the duration of all combined sanctions and their implications for international trade in Russia is unknown and hard to predict. We believe, however, that there are no reasons to assume that the return to pre-war values could be faster than in the case of the Crimea invasion, which lasted approximately 5 years.

It should be underlined, that volatility of trade can differ from industry to industry. Clearly, in terms of Russian imports, high-technology goods trade will decrease in line with imposed sanctions to the largest extent. From the export side, natural resources are expected to show the largest resilience due to high dependency on crude oil and natural gas in trade partners' economies. On the other hand, it can quickly change as already some premises of self-sanctioning are observed.

On the other hand, trade distortions will differ depending on the transport modes. Due to the suspension of serving of Russian ports and closing the airspace for Russian airlines, we believe that seaborne and airborne trade will suffer the most, while land transport will be hit to a lesser extent.

The Russia-Ukraine war is likely to have long-term consequences. First of all, if sanctions of Western countries will remain imposed for a while, the Russian economy may divert faster towards mainland China - the largest trade partner of the Russian Federation, which hasn't condemned the aggression on Ukraine so far. Such a scenario can be considered as mutually beneficial for both economies and might further reinforce the Russia-China trade relations. This is due to mainland China, to a large extent, is dependent on imports of natural resources which Russia has in abundance. On the contrary, it should be highlighted, that mainland China's economy is unable to absorb whole exports shifted from the countries imposing sanctions. Thus, only partial adjustment is expected even in the long-term.

Secondly, we expect that the current situation in Ukraine may force European countries to diversify imports of natural resources as a substitute for Russian commodities. The future of European supply from the Russian Federation is clearly uncertain (e.g., Nord Stream 2 AG declaring bankruptcy) from the business point of view as well as counter-sanctions from Russia could be expected.

Finally, we want to highlight that the overall effect of the invasion on Ukraine on the international trade of Russia - both short and long-term - will be significantly higher than any previous assumptions which will be reflected in GTAS Forecasting projections in our next forecasts release.

Dive into the effects of the Russia-Ukraine war on the global market.