High-cost US metro areas are struggling to recover from pandemic

The largest and most expensive US metropolitan areas are scrambling to recoup the job losses they incurred during the pandemic amid a migration to lower cost metros.

Of the 15 largest US metros, which together house one-third of the nation's population, the five most expensive — San Francisco, New York, Los Angeles, Boston and Washington, D.C. — have an average employment deficit of 2.1%. The five least expensive of these 15 — Dallas, Phoenix, Houston, Atlanta and Detroit — are averaging job levels at 3.2% above their pre-pandemic peak. 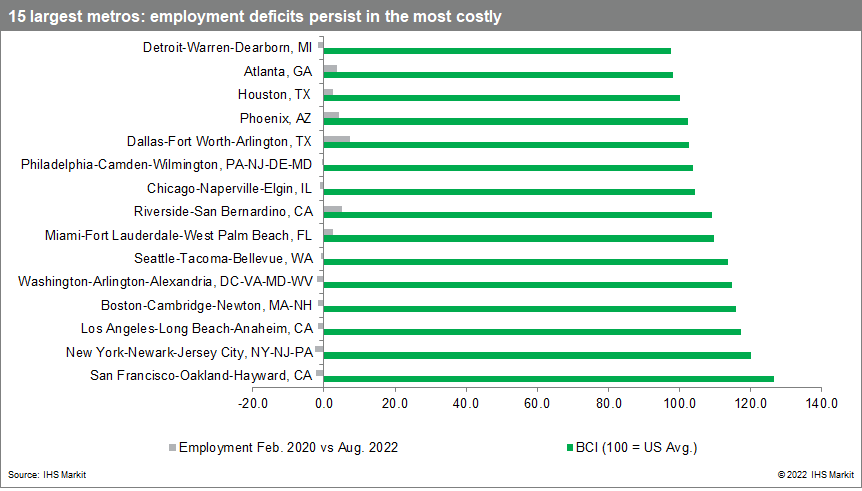 Combined, the 15 highest-cost metros narrowly surpassed their pre-pandemic job levels for the first time in August 2022, which was entirely due to recovery in the metros in the bottom two-thirds of the group.

High costs have been a competitive disadvantage for the metros at the top of this group for decades now. Firms have willingly borne these costs to benefit from locating in these markets. The pandemic greatly diminished the advantages of business, commerce, and entertainment clusters. While conditions have improved since the peak of the COVID-19 era, both businesses and workers are recalculating the value of residing in the most costly markets.

A redistribution of residents and businesses boosted those metros lower on the list. Many left the high-cost coastal cities during the pandemic for major southern and Mountain locations. These southern and Mountain metros had been among the fastest growing regions of the US before the pandemic, so the migration that happened in 2020-21 was an acceleration of existing trends.

The largest and most expensive metros now face the added burden of climbing back from their pandemic job losses at a time when employment growth will become increasingly challenging. Tight labor markets, decelerating growth in the broader US economy, and Fed tightening will be major headwinds.

The metro areas on this list face a new set of potential disadvantages. In a world where global pandemics are an abiding possibility, businesses and residents alike are considering the ability to manage future viruses, the long-term viability of remote work, and the growing appetite for flexible schedules as part of the equation of a return to big cities.

Major metros in the South and Mountain regions, due to their abundant buildable land and low density, stand to gain the most if firms decide to concentrate expansion plans outside of dense northeastern and western metros. Houston, Dallas, Phoenix, and Atlanta serve as prime examples among the largest markets; major markets a step down in size include Austin, Charlotte, Jacksonville, Nashville, Raleigh, Salt Lake City, San Antonio, and Tampa. These metros exist in the proverbial sweet spot, with large and growing labor forces, robust business clusters, lower densities, and significant cost advantages relative to the most expensive markets.

Our business costs index (BCI) compares costs across all 381 metros. The BCI weighs businesses' major costs, which vary across different areas of the country and include labor, energy, and real estate.