From a quarterly perspective, the most recent data for the second quarter of 2022 from S&P Global Market Intelligence - Global Trade Analytics Suite (GTAS) point to positive year-on-year growth for exports as well as imports in almost all the top 10 reporting states.

The adjusted PMI new exports orders readouts for the global manufacturing industry as well as services in June 2022 were below the benchmark value of 50.0 points - 48.0 and 48.2, respectively.

After growing at annual rates of 6.2% quarter on quarter in the fourth quarter of 2021 and 2.6% in the first quarter of 2022, world real GDP fell at a 1.8% rate in the second quarter. Recent data suggest the global economy is back on track, led by resilient emerging markets.

Changes in trade of the top 10 economies

As previously mentioned, Russia is not reporting data starting from February 2022 onwards, yet a tremendous drop in Russian trade is inevitable as a consequence of aggression in Ukraine.

Looking at monthly data, exports in the top 10 economies were increasing through most of 2021, as well as in January and February 2022, but the situation started changing in March 2022, when export growth dynamics slowed down in seven of 10 economies, while the UK noted a significant drop in exports value.

Imports, in turn, followed a similar trend as exports in 2021 and the beginning of 2022, followed by a slowing dynamic of growth in March 2022 in five out of the top 10 countries. The most significant slowdown in March 2022 was noted for mainland China with year-on-year growth in the value of imports reaching only 0.6%.

Coming back to the most recent results in the value of imports, the highest growth in June 2022 was noted by India, with imports increasing by 57.6%. The country was followed by Brazil, marking 33.9% growth, and EU (External trade), with a 23.3% increase.

Over the last months, the main macroeconomic drivers impacting global trade are hiking inflation in the world, closely connected to the global economic slowdown, both induced by several geopolitical events, such as the COVID-19 pandemics, the war in Ukraine, or global value chains disruptions. The inflation is fueled primarily by the energy and food sectors. For another month in a row, the forecasts of inflation by the Economic and Country Risk team show an upward revision of inflation in the short-term. 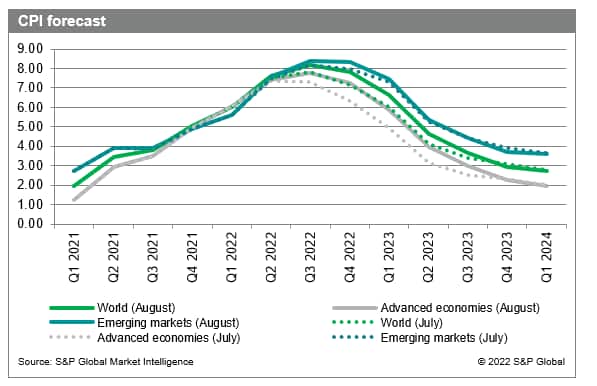 From a strategic perspective, the situation in Ukraine did not change significantly over the last month. As we noted in the previous edition of Global Trade Monitoring in July, the impact of the war in Ukraine on world trade comes primarily through commodity prices and is expected to decrease global trade in 2022 by approximately 1 p.p.

Also, in August Ukraine started to export grains, primarily to North Africa, the Middle East, and Asian countries, reducing the threat of a large-scale food crisis to some extent. At the same time, we estimate that the Ukrainian economy is about to export around half of its previous capacity.

From the Russian perspective, trade shifts from developed countries that imposed sanctions, to other destinations have been already visible in the GTAS data. The main destinations are primarily mainland China and India, but also a few other countries in the region.

Following U.S. House Speaker Nancy Pel's visit to Taiwan and mainland China's military exercises in the beginning of August, the geopolitical situation in the Taiwan strait remains tense. The situation needs to be carefully monitored, as any form of escalation may possibly result in trade sanctions, thus significantly impacting global trade.

On the other hand, in line with GTAS data, almost three fourth of total Taiwan exports is related to electronics and computers. From the global perspective, according to GTAS Forecasting data, Taiwan is the second largest (after mainland China) exporter of electronic valves, tubes, semiconductors, and electronic components in the world, responsible for 17% of total exports in 2021. In the case of escalation of the conflict, export disruptions may significantly worsen the global semiconductor shortage, spilling over to different industries (e.g. computer or automotive).

Next wave of COVID-19 pandemics

After another significant increase in COVID-19 new cases in the World in July, approaching 1.5 million new cases daily in the World, in August the pandemic situation seems to stabilize, with daily new cases dropping below 1 million.

At the same time, the pandemic situation in mainland China needs to be carefully monitored, as several large cities reintroduced some of the restrictions as a reaction to the new wave of infections, sustaining their zero-COVID policy. This reminds the situation from the first half of 2022 when strict lockdowns resulted in temporal strong economic activity reduction. At this point, however, complete lockdowns are not introduced, it should be noted that the pandemic situation is extremely hard to predict. 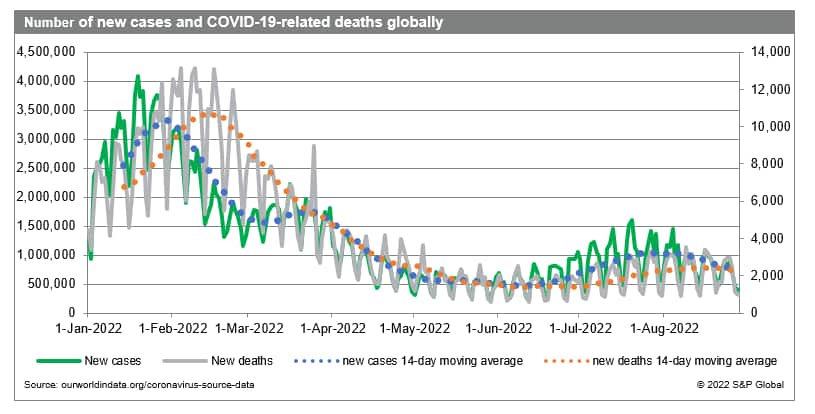 Leading Economies of the World and Methodological Issues

The top 10 group member states are responsible for approximately four-fifths of the world GDP and three-quarters of global exports, with most trade carried out within the group.

Data edge differs from state to state depending on a given reporter and its reporting calendar.

For the EU Member States, we consider only EU external trade with non-EU states.

Please note that historical data in the GTA database are being adjusted monthly due to revisions introduced by the reporting states, potentially causing adjustments to the growth rates reported in the commentary provided by the Global Trade Monitoring from prior months (the report reflects the most recent data available).