From a quarterly perspective, the most recent data for the second quarter of 2022 from S&P Global Market Intelligence - Global Trade Analytics Suite (GTAS) point to positive year-on-year growths for exports as well as imports in almost all the top 10 reporting states.

The sectors with the highest year-on-year growth in the second quarter of 2022 were 'silk, including yarns and woven fabrics thereof', 'tobacco and tobacco substitutes', and 'base metals nesoi, cement, articles thereof'.

On the other hand, the largest drop in Q2 2022 was marked by 'fur skins and artificial fur', which noted a significant decrease for the third quarter in a row; followed by 'ores, slag and ash' falling by over 20% year-on-year for the second quarter in a row.

The adjusted PMI new exports orders readouts for the global manufacturing industry as well as services in June 2022 were below the benchmark value of 50.0 points - 47.0 and 48.1, respectively.

Changes in trade of the top 10 economies

As previously mentioned, Russia is not reporting data starting from February 2022 onwards, yet a tremendous drop in Russia trade is inevitable as a consequence of aggression in Ukraine.

Looking at monthly data, exports in the top 10 economies were increasing through most of the year.

2021, as well as in January and February 2022, but the situation started changing in March 2022, when export growth dynamics slowed down in 7 of 10 economies, while UK noted a significant drop in exports value.

The latest data for July 2022 point to positive growth in almost all the states apart from Japan, which noted 4.0% decrease in the value of exports. The data for EU (External Trade), which also marked a drop in June 2022 are not yet available in Global Trade Analytics Suite for July 2022 as Eurostat's preliminary data released in September 2022 did not include Extra-EU or Intra-EU data for Hungary. The new month's preliminary data is expected to be published onto the product when all EU member states report Extra-EU trade in the upcoming release.

Imports, in turn, followed a similar trend as exports in 2021 and the beginning of 2022, followed by slowing dynamic of growth in March 2022 in 5 out of top 10 countries. The most significant slowdown in March 2022 was noted for China Mainland with year on year growth in the value of imports reaching only 0.6%.

Coming back to the most recent results in the value of imports, the highest growth in July 2022 was noted by India, with imports increasing by 43.6% y/y. The country was followed by Brazil, marking 35.2% growth year on year.

After a strong recovery in 2021, several macroeconomic projections' revisions suggest an inevitable slowdown in the global economy, with a threat of recession on the horizon. The leading factors that impact the worsening of the business climate are the war in Ukraine implying energy prices and inflation, and rising interest rates in many economies.

Despite a visible slowdown in the recent trade data, global trade growth is, at this point, still far from being negative in Q2 2022 in the majority of the largest trading economies (except for Japan). As for now, GTAS Forecasting expects global trade growth to slightly drop below zero level in 2022 and 2023 to recover in 2024.

At the same time, inflation is fueled primarily by the energy and food sectors. For another month in a row, the forecasts of inflation by the Economic and Country Risk team show an upward revision of inflation in the short term. 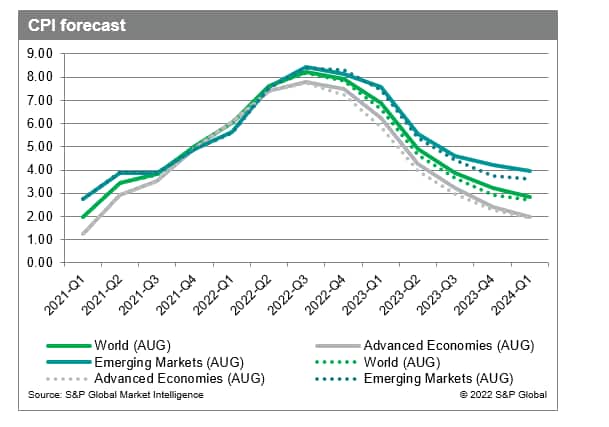 Despite the dynamics of the war in Ukraine, from the economic perspective, the impact of war on the global trade did not change over the last month. As we noted in the previous editions of GTM, the impact of the war in Ukraine on world trade comes primarily through commodity prices and is expected to decrease global trade in 2022 by approximately 1 p.p.

Interestingly, after initially huge volatility we can now observe new war-related trade patterns around the globe emerging. In terms of exports to Russia, strong year-to-year declines in trade value can be seen in nearly all countries. Surprisingly it relates to not only those countries that imposed sanctions, primarily developed economies, but also many emerging economies. On average, exports all over the world to Russia dropped by c.a. 50% initially, but this effect is slightly decaying from June. The three countries that contributed to this decay the most (significantly increased exports to Russia) are mainland China, Iran, and Turkey.

From the perspective of imports from Russia, trade value increased over the last months, which can be related primarily to the prices of oil gas, or coal, but also Russian imports spikes from several countries around the world. This group is led by India which noted over 100% increase in trade y/y each month since the war started, but we can also see increases in trade with mainland China, Brazil, Vietnam, Turkey, and Serbia.

After another significant increase in COVID-19 new cases in the World in July, approaching 1.5 million new cases daily in the World, the pandemic situation seems to stabilize, with daily new cases dropping below 1 million in August and 0.5 million in early September, returning to numbers observed in May-June 2022. 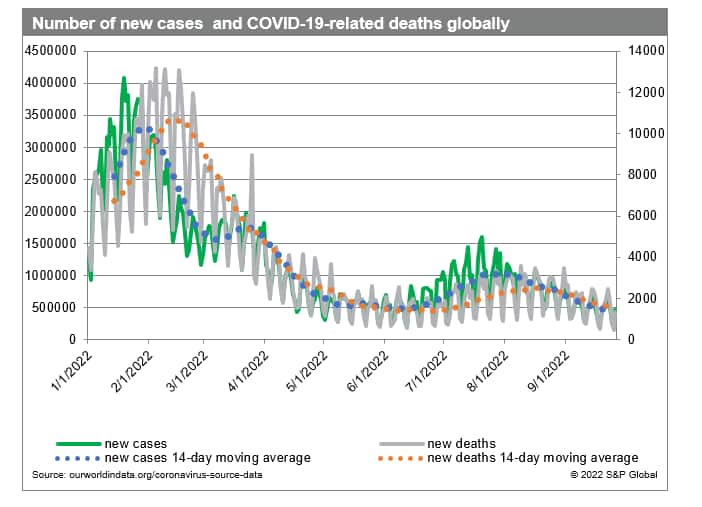 It should be noted that the impact of the pandemic on trade constantly changes. Every next wave of pandemics so far has a lesser direct impact on trade but on the other hand, indirectly can affect it via the global supply chains disruption. For now, GTAS Forecasting does not expect the COVID-19 pandemic to further destabilize global trade in the short term.

Leading Economies of the World and Methodological Issues

The top 10 group member states are responsible for approximately four-fifths of the world GDP and three-quarters of global exports, with most trade carried out within the group.

Data edge differs from state to state depending on a given reporter and its reporting calendar.

For the EU Member States, we consider only EU external trade with non-EU states.

*Please note that historical data in the GTA database are being adjusted monthly due to revisions introduced by the reporting states, potentially causing adjustments to the growth rates reported in the commentary provided by the Global Trade Monitoring from prior months (the report reflects the most recent data available).