Unlike the seemingly bipolar divides of the Cold War period, major economies - not least India, China, Brazil, South Africa, and Indonesia - now have significantly greater economic and diplomatic agency. These major economies are likely to be keen to capitalize on cleavages between the US and China for their own diplomatic, economic and security benefit.

Russia's expulsion from the G20 is unlikely, with most members either against removing Russia from the group or undecided on the matter. Only the US, Canada and Australia support Russia's expulsion. G20 members are likely to maintain their positions, driven by national interest considerations. 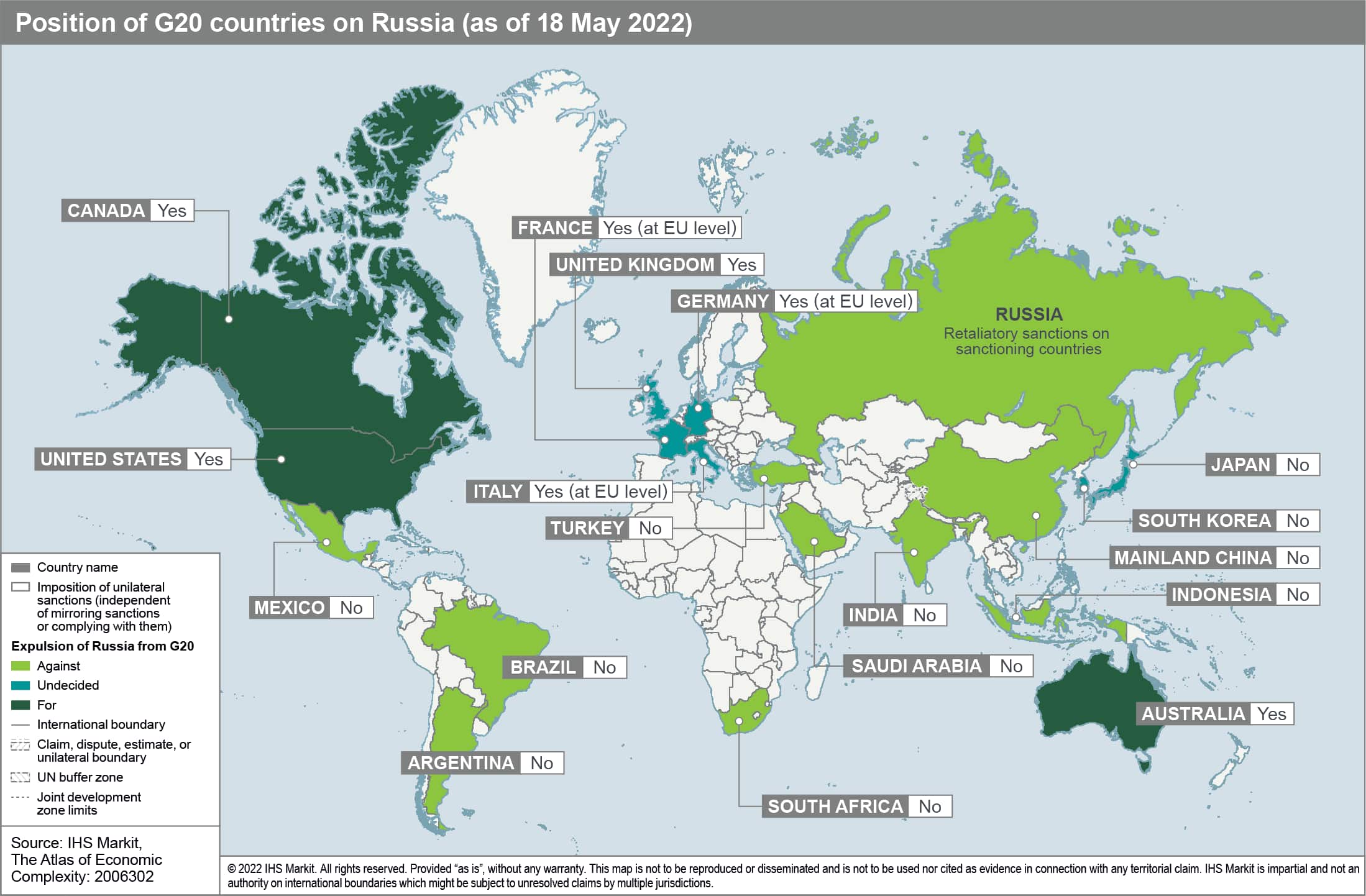 Indonesia - the G20 president for 2022 - invited Russia to attend this year's summit, to be held on 15-16 November, and extended a one-time invitation to Ukraine, which is not a G20 member. The Russian and Ukrainian presidents confirmed their planned attendance.

Their presence at the November summit suggests that the likelihood of Russia being expelled is remote. Abstentions by Australia, Canada and the US are more likely, especially if Russia chooses to escalate the conflict within Ukraine or in neighboring countries.

Several G20 countries are skeptical of both the impact of Russia's actions on the global world order, and the principle of significant unilateral sanctions as a repeated mechanism of opposition.

Splits within the positions of G20 are an early indicator of increasing fault lines between countries, affecting future political, security and trade relations that would be driven less by ideology-based alignment.

The position of Indonesia is crucial because, procedurally, a country's expulsion from the G20 must be communicated by the host country. The attendance of officials from all G20 countries plus Ukraine in the Foreign Ministers' Meeting in July would likely indicate Indonesia's ability to keep the group together.

The US, UK, Canada, EU, and allies among advanced Asian economies have - with some degree of consensus - positioned the economic campaign against Russia, including the imposition of sanctions and export controls principally across the banking and defense sectors, and against targeted individuals and entities. Together with a wave of corporate self-sanctioning, the government-led restrictions threaten global financial isolation for Russia.

Consensus appears to be increasing against total diplomatic and economic Russian isolation, driven by national interest considerations of countries across regions.

China and India will continue to maintain strategic independence regarding the conflict and are also highly unlikely to support Russia's expulsion. China has provided political support for Russia across other multilateral fora. A change in China's position is improbable without significant trade and investment concessions from the US and from the EU around the stalled China-EU investment agreement. India is also unlikely to explicitly condemn Russia given its foreign policy doctrine of 'strategic autonomy.'

Latin America's G20 member states - Brazil, Mexico, and Argentina - have been critical of Russia's action and have accordingly voted against Russia at the UN. However, the three countries have refused to unilaterally impose sanctions against Russia, taking a stance that is not aligned with the US.

The G20 is not the only platform for economic engagement between advanced and emerging economies. Still, prospects of its rupture represent an early indicator of the fault lines likely to shape future security, trade, and diplomatic relations among multiple centers of global influence. These fault lines would further challenge the idea of an international community, with national interests overriding ideology-based alignment.