Escalating Crisis on the EU-Belarus Border - What is its implication to Trade Relations?

Belarus is a landlocked country in Eastern Europe bordering Russia, Ukraine, Poland, Lithuania, and Latvia. It covers an area of 207,600 square kilometers and has a population of 9.3 million. According to IHS Markit ECR, its real GDP equals U.S. 58.48 billion and nominal GDP per capita at US 6,377, making it a developing state. In its Transition Reports, EBRD perceives Belarus as one of the worst in economic transition rankings. Some economists consider its economy as a case of non-transition with an authoritarian regime, the prominent role of state-owned enterprises, and significant abounding inefficiencies.

As a result of geopolitical changes in the second half of the 1980s, the parliament of the republic proclaimed the sovereignty of Belarus on 27 July 1990. During the dissolution of the Soviet Union, Belarus declared independence on 25 August 1991. Following the adoption of a new constitution in 1994, Alexander Lukashenko was elected Belarus's first president in the country's first and only free election post-independence, serving as president ever since.

In 2000, Belarus and Russia signed a treaty for greater cooperation, forming the so-called Union State. Belarus is currently, to a large extent, dependent militarily, economically, and politically on Moscow.

Lukashenko was reelected a president again in the 2020 elections, which many countries have not recognized. The EU has levied significant sanctions against the Lukashenko regime in the aftermath of the fraudulent elections and due to intimidation and violent repression of peaceful protesters, opposition members, and journalists (the so-called fourth round of sanctions). The EU does not recognize the results of the 2020 Belarus elections, condemning them as neither free nor fair.

Since October 2020, the EU has progressively imposed restrictive measures against Belarus. A total of 166 individuals and 15 entities are now designated under the sanction's regime in Belarus.

The EU Council has also introduced a ban on the overflight of EU airspace and access to EU airports by Belarusian carriers of all kinds, due to the forced landing of Ryanair flight in 2021, overflying Belarus on the way from Greece to Lithuania.

Following the political upheaval in Belarus and the restrictive measures adopted by the EU, in June 2021, Belarus started to organize flights and internal travel to facilitate the transit of migrants towards the EU, first to Lithuania and then to Latvia and Poland. The majority of migrants are Iraqi, Afghan and Syrian nationals.

The EU and NATO consider it as a hybrid attack. The regime aims to destabilize the situation on the EU borders and within the EU. On 25 June 2021, EU leaders condemned any attempt by third countries to instrumentalize migrants for political purposes.

Despite the diplomatic actions taken by Poland, Latvia, Lithuania, and the EU, the number of flights has decreased. However, the situation on the border escalates further with forced entry trials into the territory of Poland and Lithuania and increasing humanitarian crisis.

At the European Council of 21-22 October 2021, EU leaders said that the EU would continue countering the ongoing hybrid attack launched by the Belarusian regime, including by adopting further restrictive measures against persons and legal entities. As a result, on 9 November 2021, the EU Council adopted a partial suspension of the EU-Belarus Visa Facilitation Agreement for officials linked to the Belarus regime.

Potential militarization of the conflict is rising with provocative actions taken by Belarus and Russia organizing large-scale military maneuvers close to the border with Poland early this year. Then joint and not preannounced drills of Russian and Belarus paratroopers near the border with Poland and Lithuania were stressed to respond to 15,000 Polish soldiers being deployed to Poland's border with Belarus.

NATO stressed last Friday that it was monitoring for any escalation or provocation in the situation on its members' borders with Belarus after the drills. Biden administration perceives the current situation as a significant concern. At the same time, it raised the alarm last week with its NATO and EU allies that Russia might be weighing a potential invasion of eastern Ukraine due to a significant buildup of Russian forces near the Ukrainian border. That could significantly further destabilize the region under stress with the conflict in eastern Ukraine and annexation of Crimea back in 2014.

The EU is likely to strike the key Belarus economic sectors (companies) with directed sanctions. It could include further sanctions on the state airline and the manufacturing production facilities, such as the fertilizer industry.

Furthermore, as a potential countermeasure, Poland is considering shutting down a rail terminal in Małaszewicze at the Polish-Belarusian border, known as the Chinese gate to Europe. The terminal is currently responsible for 90% of rail shipments from mainland China to the EU, including Western Europe. It is a key element of the Chinese one belt, one road initiative. The Belarussian regime is making money from the transit.

Due to the significance of the measure, which would affect Polish firms the most, and the trade with Western European partners, that would have to be coordinated at the EU level.

The fifth package of sanctions will be introduced for sure by the EU. Excepting it, Lukashenka has threatened that Belarus may cut off gas transit through its territory in response to EU sanctions. This could be a significant problem both to the regime (as a source of funds due to transit levies) but could affect the critical route of natural gas imports of Poland and other EU states from Russia amid the ongoing natural gas prices crisis and before incoming winter.

Main Export Markets of Belarus in 2021 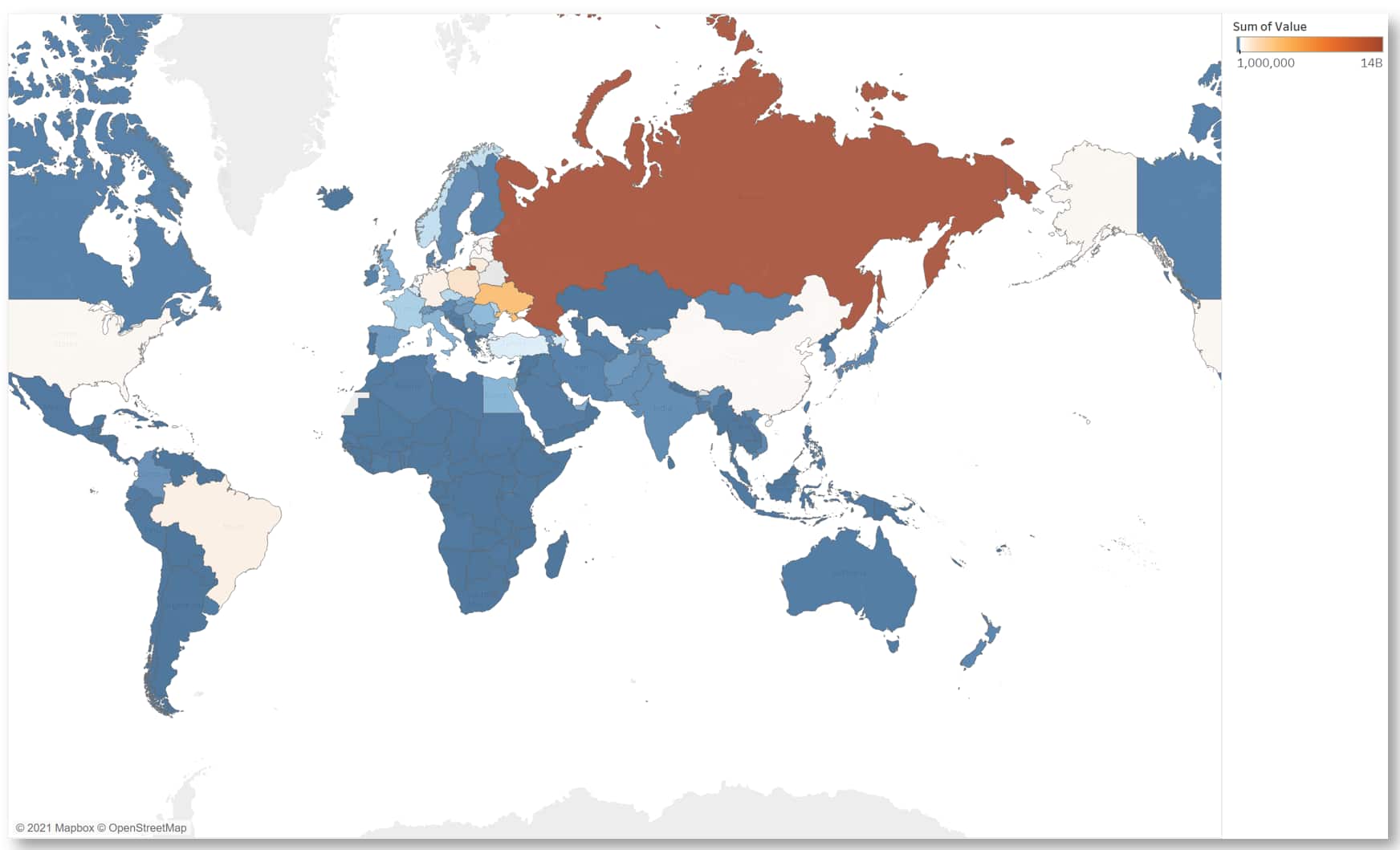 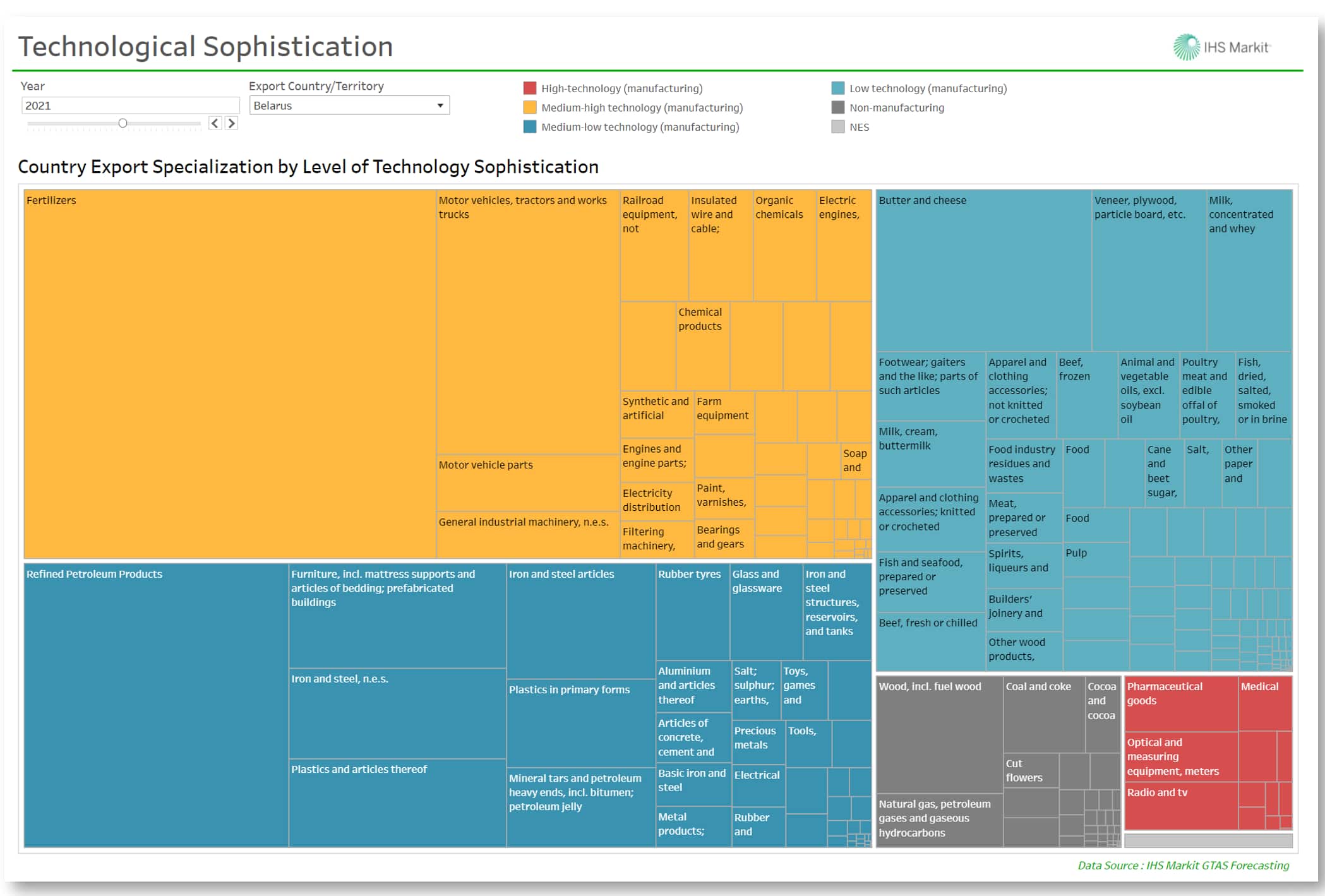 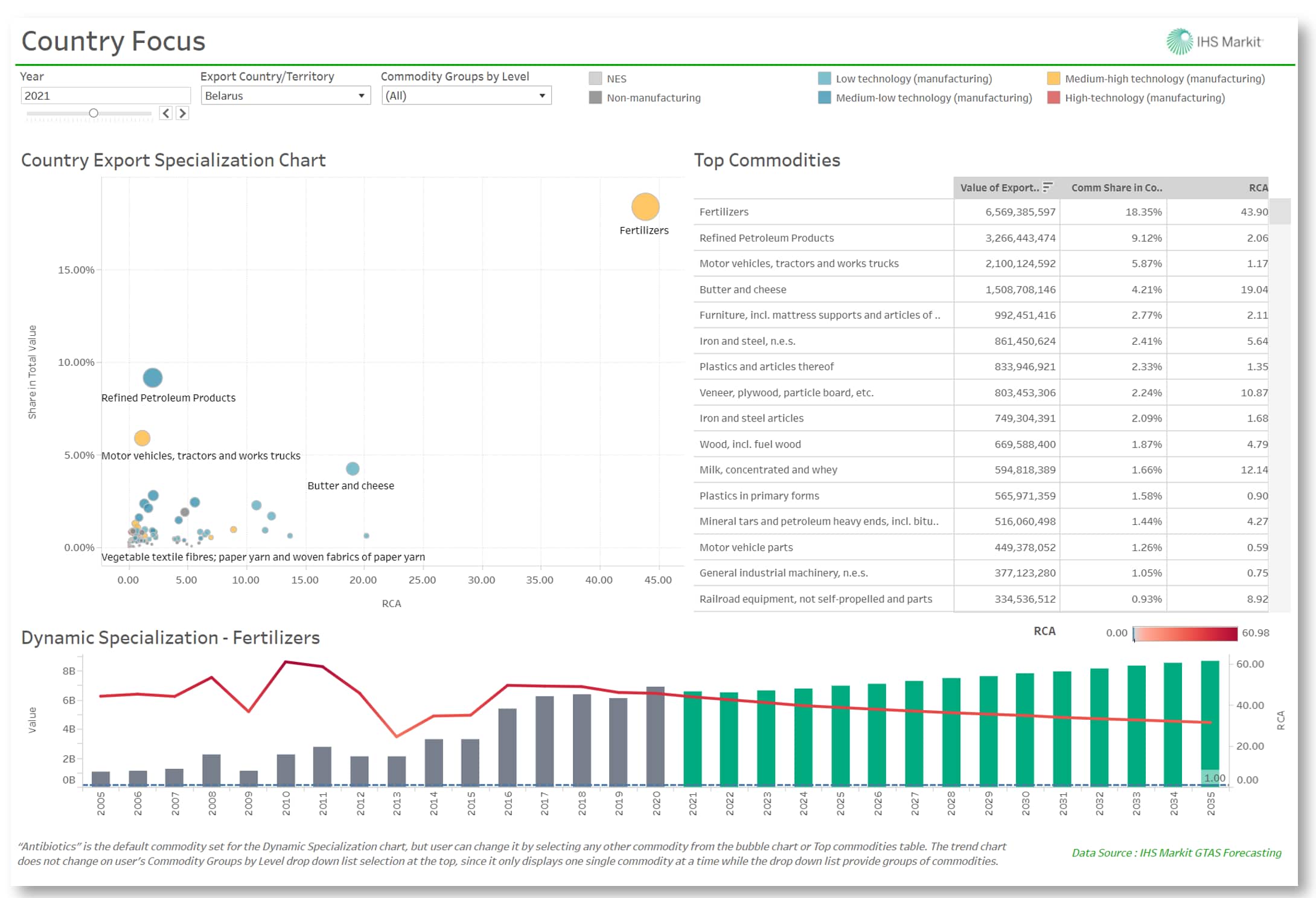 The Potential Impact on Rail Trade Between China and the EU

If Poland decides to block the terminal in Małaszewicze at the Polish-Belarusian border, it could significantly impact the rail trade on the so-called Silk Road. As much as 90 percent of goods imported from China to Western Europe by rail are transported through the terminal. As of August 2021, approx. Twenty-five thousand wagons are serviced by the terminal monthly, with a record number of trains being serviced now and further expansion of the terminal's capacity being planned.

Over a more extended period, the role of rail trade is steadily increasing as an alternative to the by now dominating seaborne and airborne trade modes. As an illustration, please look at the GTAS Forecasting Analytical Dashboard focusing on the rail trade from Asia (apart from Western Asia) with EU and other European states (including the UK) for 2021.

The potential blockage in Małaszewicze could affect the trade of Poland, but directly Germany, Czechia, France, the Netherlands and Belgium, and China, of course. For the sanction to function, similar steps would have to be taken by Latvia and Lithuania. By blocking the terminal, Poland would, in practice, block trade between the entire European Union and the Far East.

Other transit routes, for instance, southern routes through Turkey or Piraeus, potentially more costly to service trade with northern parts of Europe but utilized in servicing south EU states, but a not far way of in the process, could be considered an alternative.

The representatives of the Polish government admit that the terminal closure is being considered but is only one of several options considered.

Rail trade between Asia and Europe in 2021 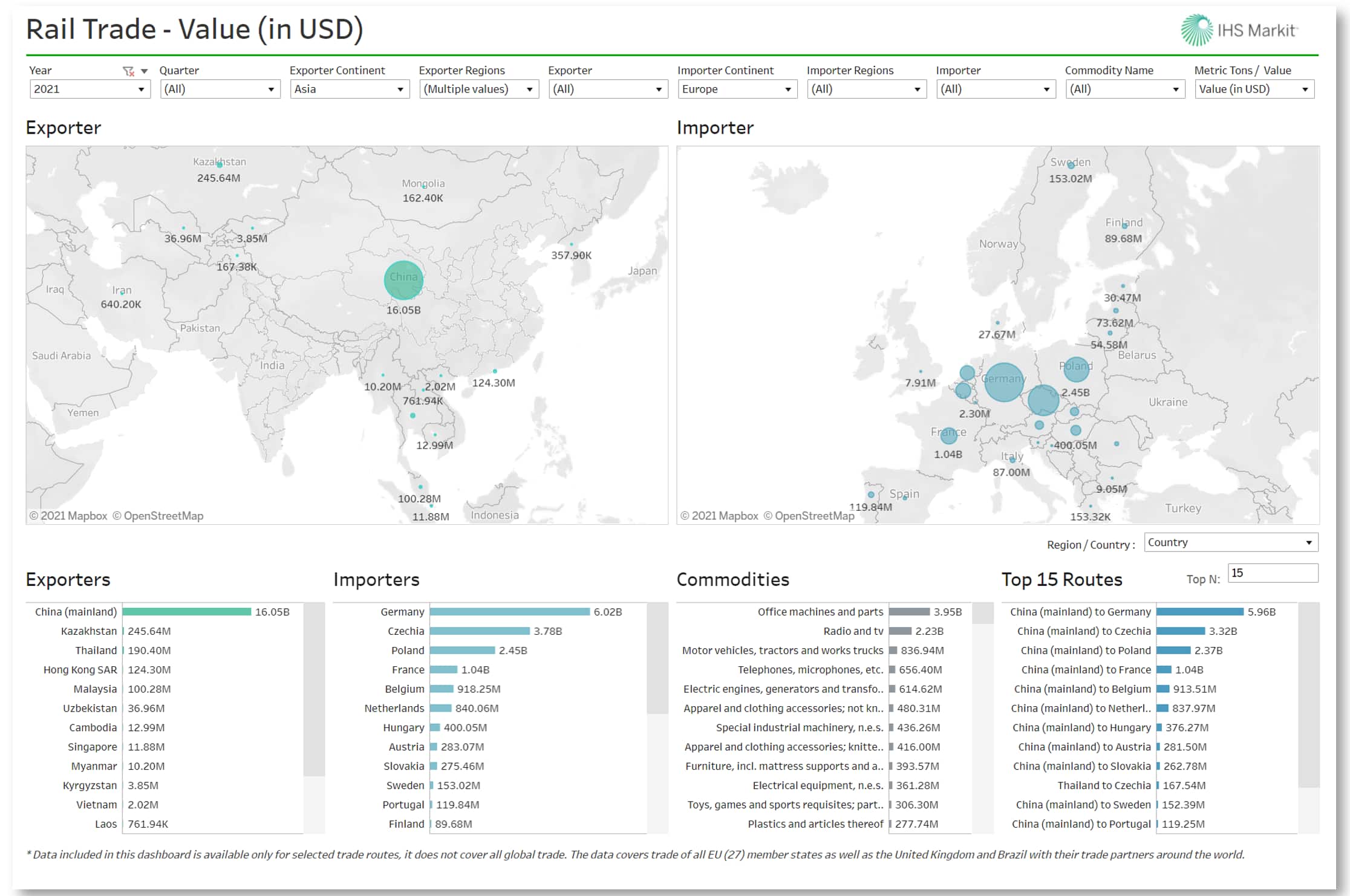