The transition to electric vehicles (EVs), a key component of the broader energy transition that most major governments profess, will shape the demand for electric vehicles batteries and their mineral feedstocks such as lithium. Sourcing these minerals, however, comes with political and security risks. Ahead of the United Nations (UN) climate change conference (COP 26), IHS Markit assesses the risks associated with the prevalent cathode types (battery chemistries).

In this reading, we will cover the political factors that drive the transition to electric vehicles and country risks that might affect EV battery supply chain and take a deeper look into lithium supply chain risks.

Energy transition has become a pillar of policy for most major governments. All Group of 20 (G20) members have published targets to reduce greenhouse gas emissions over the coming decades - even if the targets, the regulatory infrastructure around them, and the political will to meet them vary widely. Transport, a major component of energy policy, often centres on shifting to electric vehicles.

Indeed, this shift to electric vehicles - and the supply chains that underpin it - have been elevated to strategic importance. In June 2021, United States President Joe Biden's administration issued preliminary findings from a 100-day review of supply chains providing critical goods to the United States (US) government and industry, including high-capacity Lithium-Ion (Li-ion) batteries as well as the minerals and materials used in EV battery production.

The US government aims to strengthen the lithium-ion battery industry by securing the upstream supply of 35 minerals in total that are critical in the production of leading-edge technologies, including the cobalt and lithium that are essential for producing the cathodes in Li-ion batteries.

Likewise, the European Commission in September 2020 issued an Action Plan on Critical Raw Materials, which lists cobalt, and, for the first time, lithium, as essential in the electric vehicle supply chain and other technologies. Japan and Canada also identify nickel as a critical mineral.

Cobalt, lithium, and nickel are exposed to a range of supply chain risks because their production and processing are geographically concentrated and dominated by jurisdictions that have been alleged to violate labour and human rights and are geopolitical rivals to the US and Europe.

Whilst the cost of manufacturing Li-ion cathodes will be highly influenced by evolving battery feedstock prices, their geographic concentration implies high political, security, and reputational risks. The charts below weight trade flow data from the Global Trade Atlas by the concentration of total exports of that mineral from the main countries of origin and the dominant national-level Country Risk scores for those geographies.

The resulting country risk exposures are then adjusted for the molecular mass of the critical minerals that are used to produce the two dominant types of cathode technology: nickel-manganese-cobalt (higher energy density, higher cost, likely to be used in higher-end EV models); and lithium-iron phosphate (lower energy density, lower cost, likely to be used in entry-level models).

The Global Trade Atlas covers 98% of merchandise imports and exports and is based on calibrated and harmonised official data; the 21 Country Risk scores cover political, security, and business risks for 211 geographies, are set by regional experts and calibrated by senior analysts.

However, these electric vehicles battery supply chain risks are of course diverse and idiosyncratic; and can be assessed, managed, and mitigated only by understanding their local context.

The remainder of these processed lithium compounds is almost all exported to South Korea and Japan. Increasingly, Chinese lithium producers are vertically integrating extraction to processing, having acquired, or farmed into assets in Australia and Latin America. 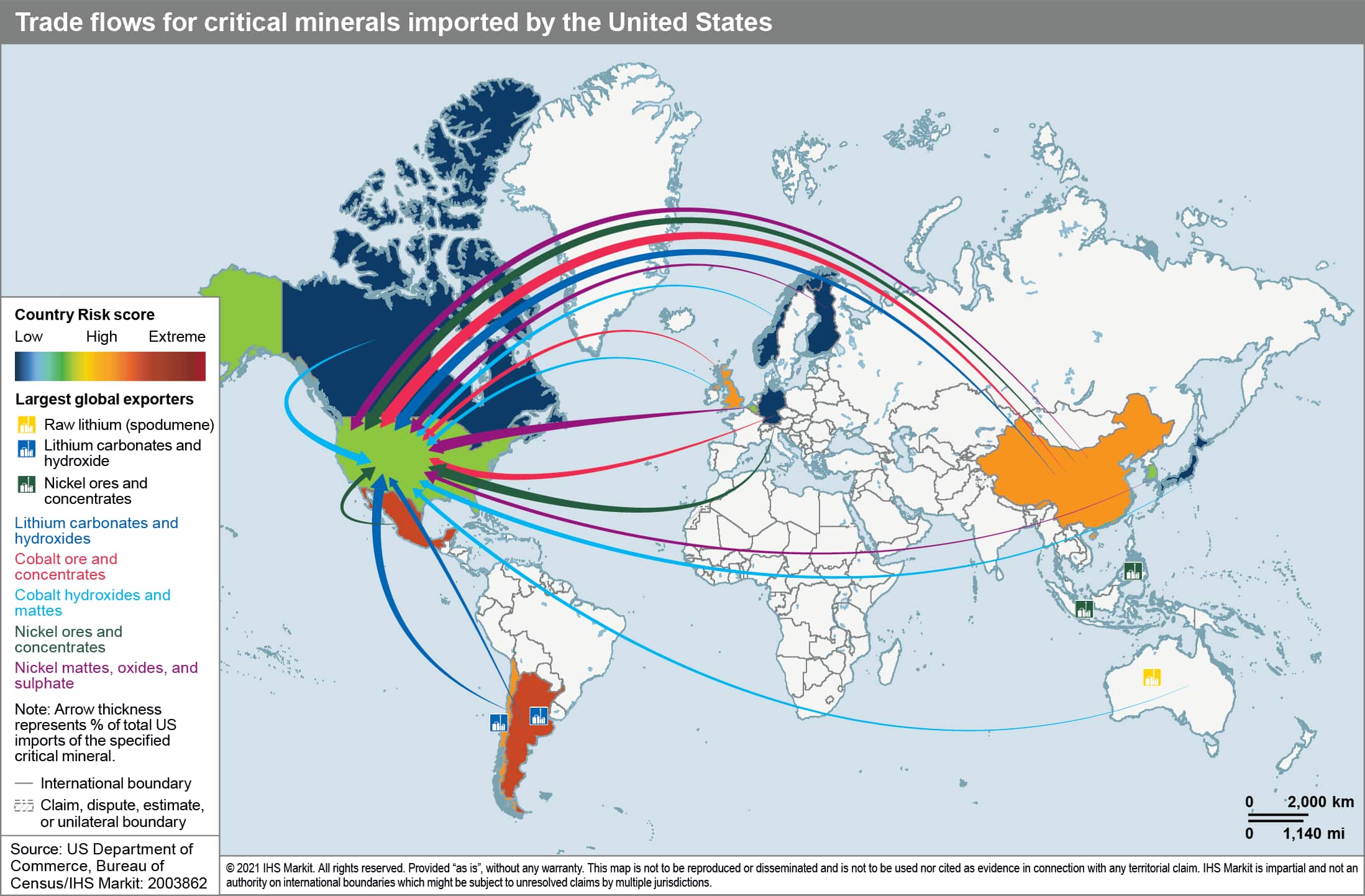 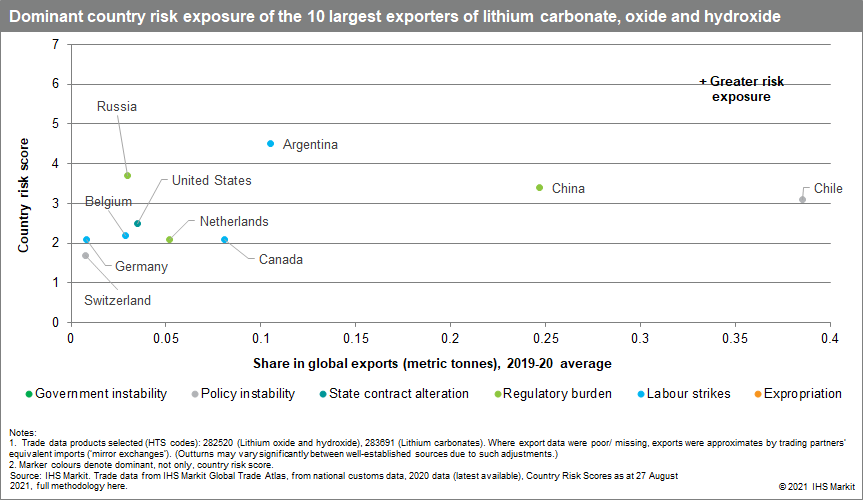 Lithium concentrates in Latin America are extracted from brines and processed into lithium carbonates, after which they are processed into the higher-grade lithium hydroxide. These resources are more expensive to produce but supply is also more contested. Production from brines is concentrated in Chile and Argentina's salt flats.

Major Latin American governments, however, are increasingly under pressure to favour state ownership and domestic value-addition - particularly affecting the development and production of the world's largest lithium deposits in Chile, Bolivia, and Argentina.