Other than strong increases in Ontario and British Columbia, starts increased solidly in Saskatchewan, Alberta, and Newfoundland and Labrador. Meanwhile, starts in Quebec and Manitoba declined for the second consecutive month following the surge in January. After two months of starts surpassing Ontario's level, Quebec's housing starts slid below Ontario's while remaining at a strong level. Starts in Atlantic Canada continued its four-month losing streak, mainly because of the sharp decreases in New Brunswick and Nova Scotia.

January and February's starts were substantially revised up. While the upward revisions were widely spread across Canada, except for New Brunswick, the upgrades in Quebec (up by an average of 12,117 units over the previous two months) and Ontario's housing starts were relatively stronger than those in other provinces. With substantial revisions and strong March results, first-quarter housing starts soared 28.4% quarter over quarter (q/q) to 307,665 units, reaching its historical high. The strong jump in the first quarter was widespread in urban single (up 36.8% q/q), urban multiple (up 20.3% q/q), and rural (up 67.5% q/q) starts. On a quarterly basis, Quebec, Ontario, and British Columbia led the overall growth while starts in Alberta, Manitoba, Nova Scotia, and New Brunswick decreased. 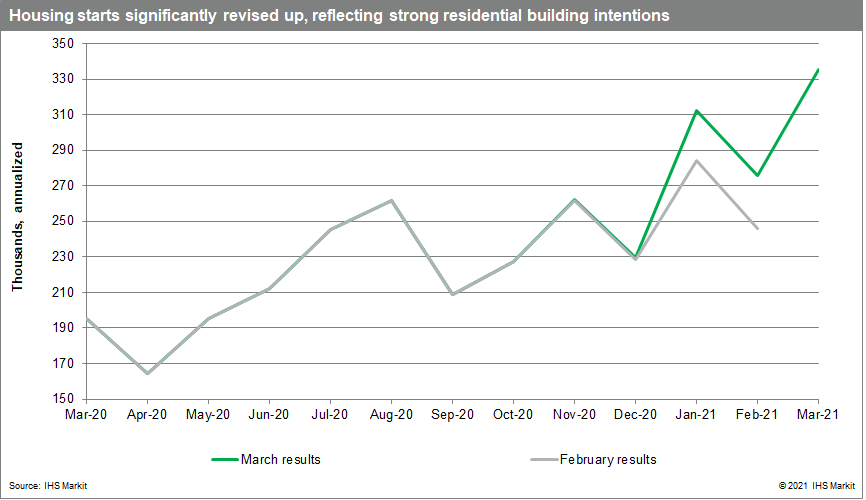 Reflecting strong existing housing demand and lean supply, new home building activities surged in March and in the first quarter, helping increase new home supply in the long term. Given the much stronger-than-expected housing starts results in the first quarter indicating strong residential building intentions on current hot housing demand, the housing starts forecast will be revised up in the May Canadian macro forecast. As a result, real business investment growth in new residential construction will likely be more robust than the current forecast in the quarter. Overall real residential structure investment growth will strongly advance in 2021 as the healthy momentum will flow into the remaining quarters in 2021, supported by the low-interest environment.