Potential relaxation of COVID-19 rules following the 20th National Congress will have limited impact on credit growth in mainland China.

The 20th National Congress of the Chinese Communist Party is due to take place on 16 October, and it is expected that COVID-19-related rules will be relaxed to improve travel and potentially investment in mainland China. However, given the vast amount of liquidity in the economy, there is still a lack of demand for credit. This is due to weak corporate funding demand and local real estate problems, and IHS Markit expects that this will limit credit growth for 2022 (10.6% in 2022, compared with 11.3% in 2021). 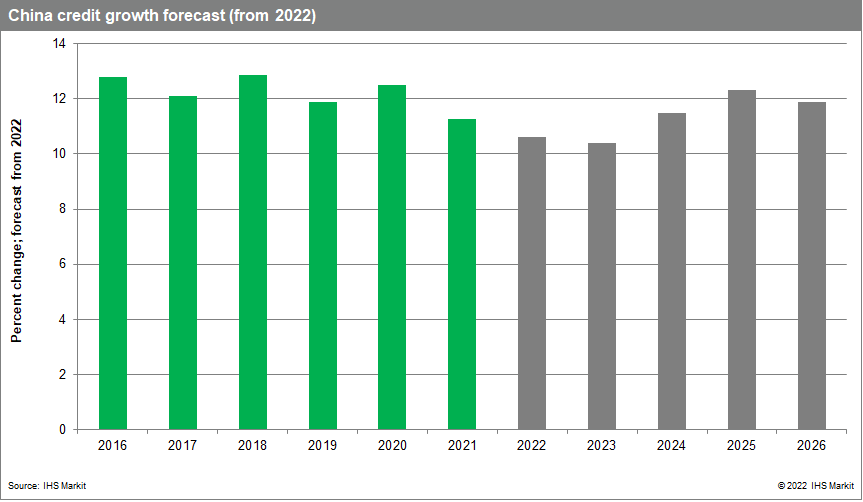 Vietnam's credit growth is expected to remain at 14% despite banks utilising the majority of their annual allowance.

Although the Vietnamese central bank noted that some banks have fully utilised their lending allowance this year, IHS Markit expects the banking sector's credit growth to end the year at around 14%, because it is normal practice that the reported loan growth is similar to the target set at the beginning of the year. The continued economic headwinds experienced by developed economies are likely to have an impact on demand for Vietnam-made goods, but the government and the central bank are likely to prioritise growth for sectors that are making the largest contribution to the economy. 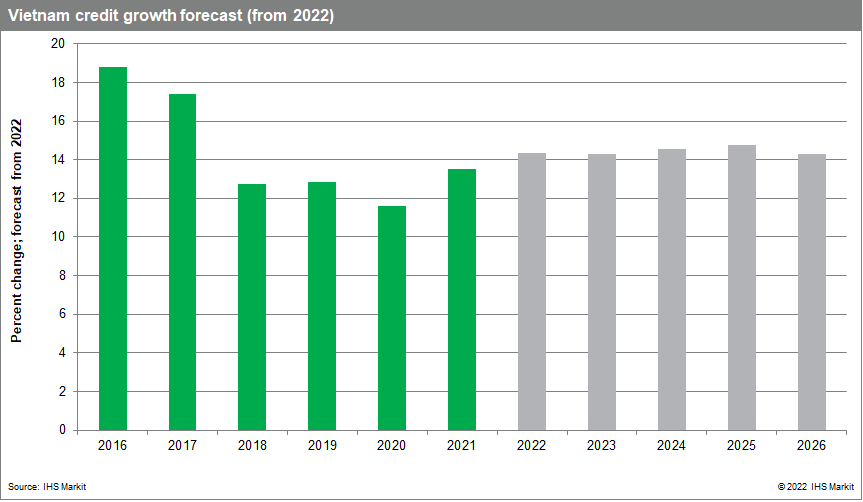 Temporary loan support measures, such as loan payment moratoria, have expired for almost all countries in CEB, with the exception of Poland, Romania, and Hungary; the former two have re-introduced measures to stem the impact of cost pressures after the expiry of COVID-19 pandemic-era support measures. Increasing cost pressures for private-sector borrowers have raised debt-servicing concerns. IHS Markit expects that, in response, more economies are likely to bring in measures to assist borrowers - for example by following in the footsteps of Czechia or Serbia. In August, the Czech government opted for caps on total housing expenses (including water and energy) and the National Bank of Serbia unveiled measures that are aimed at "protecting the living standards of Serbian citizens" in response to bank fee increases. Given the wider range of banking sector vulnerabilities and borrower cost pressures, we expect the trend of support measures to help borrowers to continue, encourage new lending, and/or reduce costs from Emerging European authorities. 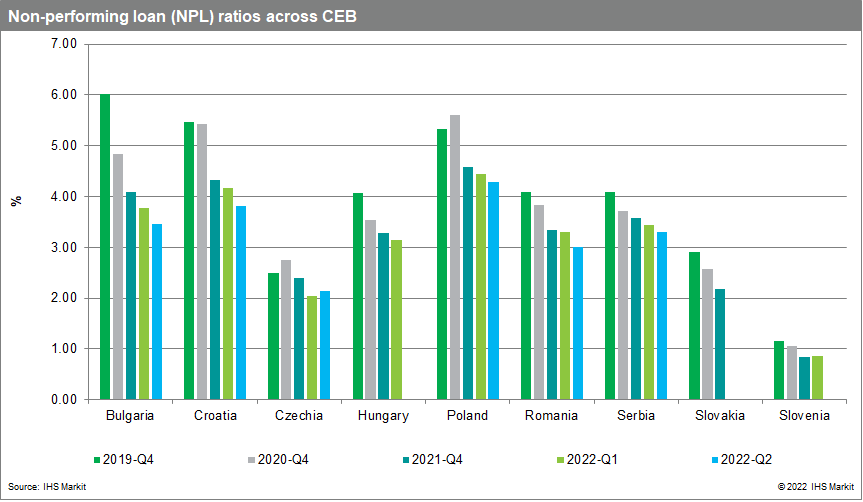 During September, four Chilean banks issued (nominal) local currency bonds instead of the inflation-adjusted ones. In our view, this probably indicates investor expectations of economic deterioration in the country, which will quell inflationary pressures. In turn - and if realised - non-inflationary bonds would bring higher yields in real terms. While bond issuances are likely to be limited compared with 2020 and 2021, this will nevertheless allow the sector to keep more reliable funding over the medium term, and is likely to lower its reliance on central bank borrowing. 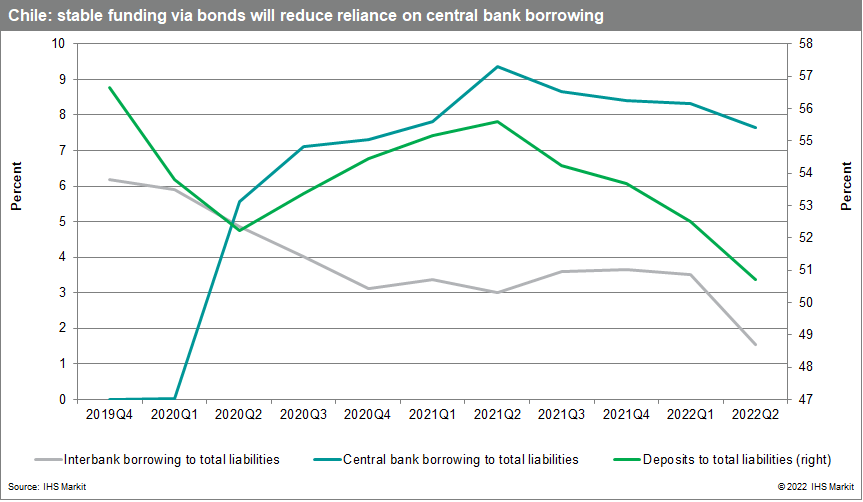 Ample liquidity supported by high oil prices is expected to prop up credit growth in the Gulf despite higher interest rates.

Our economists are forecasting that interest rates in the Gulf will rise above 2018 levels by mid-2023 as regional central banks follow the US Federal Reserve's rate hikes. While these interest rate increases are likely to dampen demand for new debt among some interest rate-sensitive borrowers, the supply of credit overall is expected to remain robust in most sectors as higher levels of liquidity, supported by high oil prices, mutes the impact of monetary tightening on credit growth. Our latest forecast is for credit growth to average 7.7% across the region in 2022 and 2023. 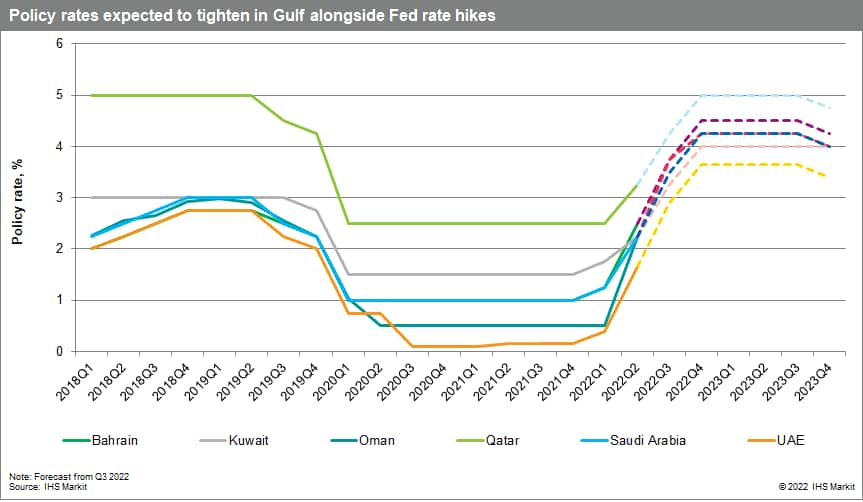 Ghana is expected to start negotiations with local debt holders to restructure its local currency debt, with negative implications for banks' capital buffers.

The Ghanaian government is reportedly considering negotiating with local debt holders to restructure its local currency debt, in order to secure a USD3-billion loan from the IMF. Owing to banks' high level of sovereign debt exposure (Ghanaian banks held about 29% of their total assets in domestic sovereign debt as of March 2022), a domestic debt restructuring could potentially trigger significant financial instability, potentially causing banks to require government support, given that any loss or haircut in the value of government securities will cause capital losses to banks - with some banks' capital ratios falling below regulatory requirements, depending on the size of the restructure 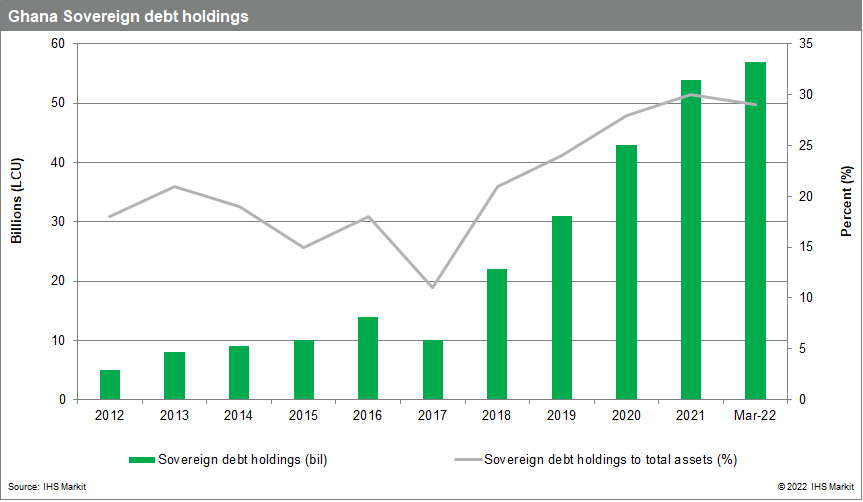