Our banking risk experts provide insight into events impacting the financial sector in emerging markets in May.

Profitability of smaller banks in Mainland China likely to be affected by lower interest margins. 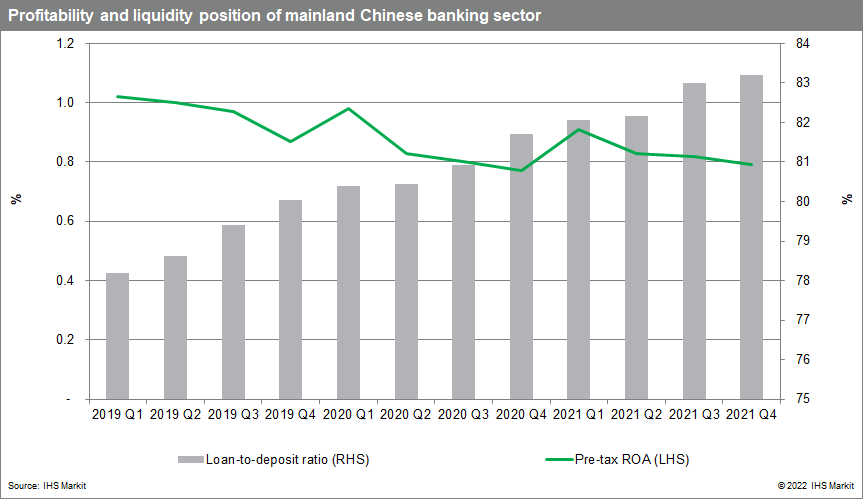 Production and transmission of energy account for around 15% of total loans in Pakistan. Although currently, the NPL ratio for the sector remains historically low at 5.1%, it has been rising steadily since 2020. The higher energy prices and continued budget deficit will potentially delay subsidies payments from the government to energy companies. This in turn will limit energy companies' abilities to pay banks as they rely on these subsidies payments to remain liquid; ultimately, this will cause a rise in the overall NPL ratio. 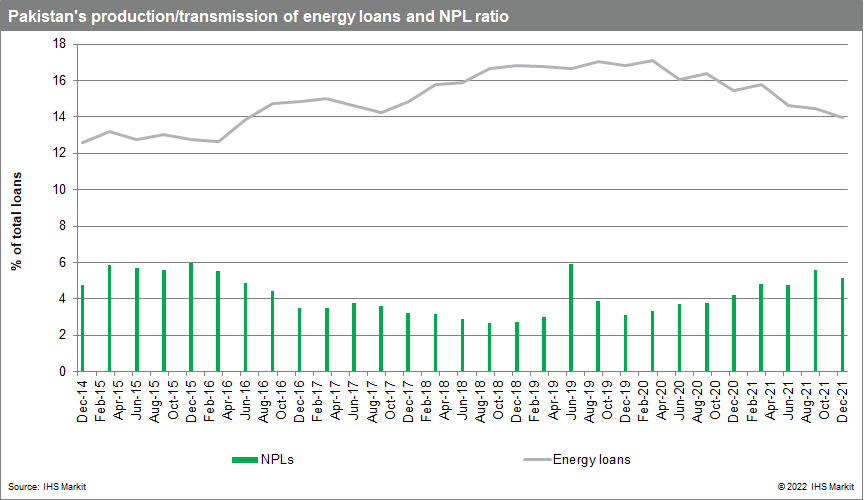 New banking sector support measures could be introduced following the expiration of official pandemic-triggered loan moratoriums in many countries across Europe at end-2021. COVID-19-related borrower support measures have so far prevented a sharp spike in NPLs, although increasing cost pressures for borrowers via higher energy costs, food prices, and looming interest-rate hikes threaten to strain debt-servicing abilities across Europe, particularly for countries such as Bulgaria, Hungary, Poland, and Romania, which have elevated shares of troubled loans (Stage 2 plus non-performing loans). In response to potential asset-quality pressures, Poland announced new mortgage borrower support measures at the end of April, including a four-month credit holiday without interest-rate accumulation. Meanwhile, Romania has extended its European Central Bank (ECB) repo line arrangement to January 2023 and is reportedly mulling the introduction of a loan-repayment moratorium. We expect further banking sector support measures targeted at borrowers or new lending to be introduced by more Emerging European authorities - and potentially new ECB moratorium guidelines - in the near term. 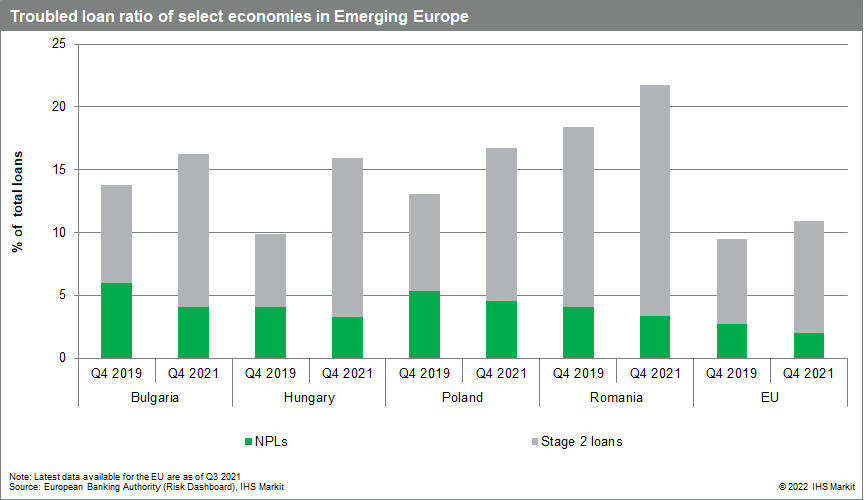 Implications from the ongoing Russia-Ukraine war have negatively affected surrounding economies linked by direct trade and oil imports. Moreover, the lower foreign exchange supply in Eastern Europe and Central Asia (EECA) markets has increased pressure on the local currency markets across the region. With countries such as Kyrgyzstan and Kazakhstan having recently tightened foreign exchange controls, in the latter exports of large sums of foreign currency cash and gold are prohibited. The exchange rate (local currency unit per US dollar) is forecast to reach an average of 54.07% year on year (y/y) at end-2022 in Eastern Europe and Central Asia versus 0.36% y/y a year prior. Given the dollarized nature of many Eastern European and Central Asian banking sectors, the ongoing currency depreciations, and the implications for borrower debt servicing and loan forbearance, it is likely that fresh capital controls will be implemented, or existing controls will be tightened further. 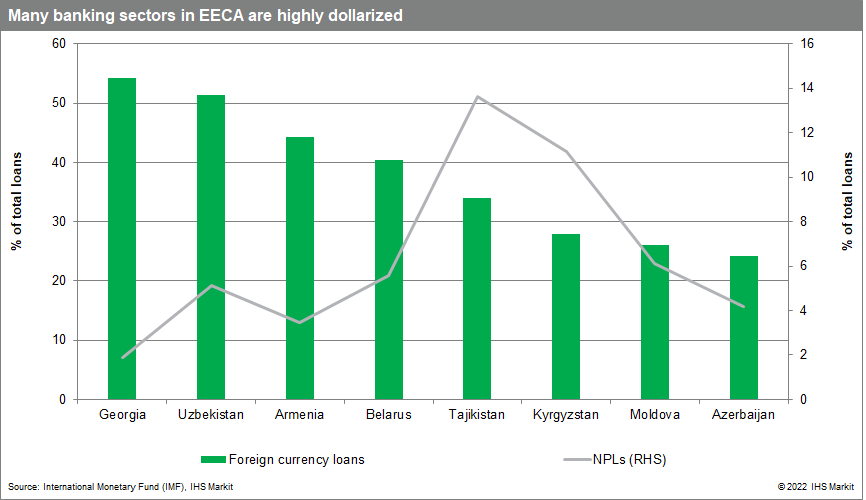 In January 2021, the president of Ecuador's state-owned bank Banco del Pacífico announced a schedule for reaching the sale of the institution. The government took over the bank after the 1999 banking crisis and, because of the lack of political support, it has been unsuccessful at privatizing it since. However, given the country's tight fiscal position, it is expecting to sell the bank by the end of the year. According to the president of the bank, by the end of May, there should be some offers for Banco del Pacífico. We expect further details of this through the course of the month. 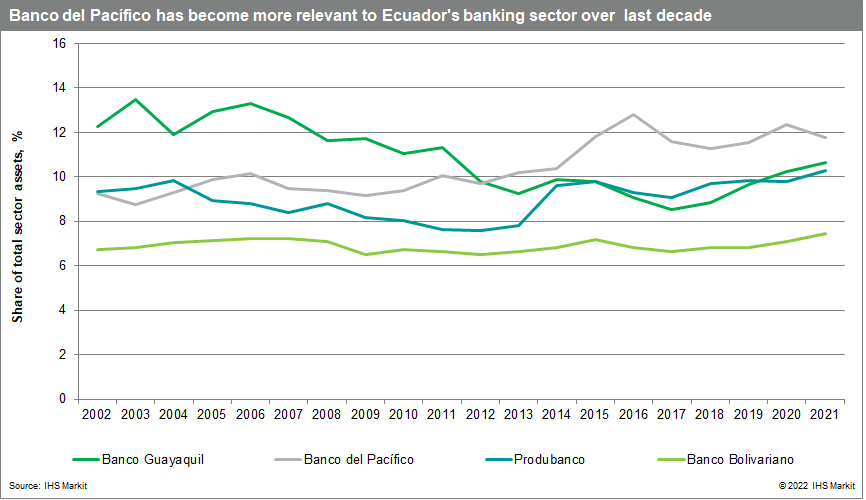 At the regional level, Middle East and North Africa countries, particularly Gulf oil exporters, are projected to achieve stronger economic growth as a result of higher world oil and gas prices that will channel through to rising consumption, exports, and real fixed investment spending. Even if NPLs edge up slightly following the removal of COVID-19 forbearance and support measures, this improved economic outlook will hold down peak NPLs and provide further impetus for authorities to remove remaining COVID-19-era support measures for banks and bank borrowers. More downside risk is present in already fragile Middle East and North Africa economies, such as oil importers in North Africa, that will see rising food and energy prices widen current-account deficits at the same time that tightening monetary policy in advanced economies increases the risk of net capital outflow, putting downward pressure on local currencies and imposing serious financing challenges. Significant downside risk thus is present for these countries' NPL forecasts, and a targeted extension of COVID-19-era forbearance measures, like those already announced for tourism-sector and SME borrowers in Tunisia and Morocco, is likely. 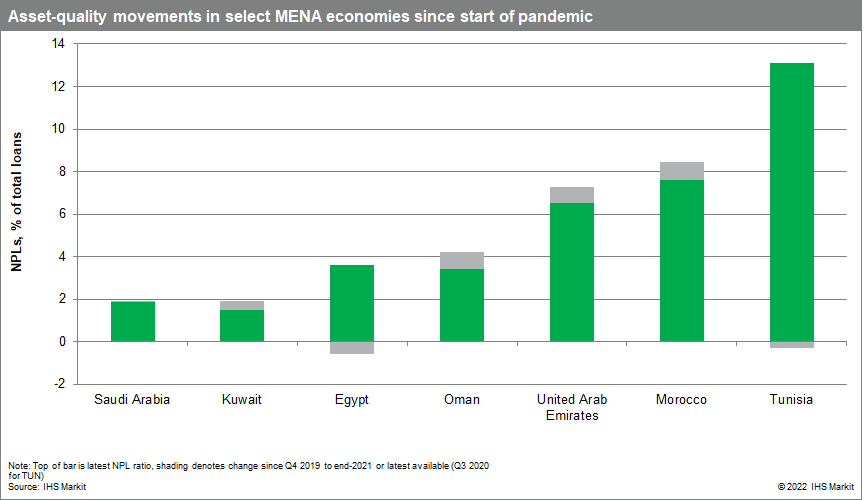 The Nigerian banking sector has experienced operational foreign currency liquidity strains since 2015, following the plunge in crude oil prices in 2014 and 2020 given the country's high reliance on crude oil exports. Although crude oil prices have improved, production continues to lag because of operational challenges, hindering export earnings that are much needed to ease foreign currency shortages. Contradictory central bank policies add to a decline in investor confidence, further exacerbating foreign currency liquidity strains in the market, which raises concerns of banks' ability to honor foreign currency obligations. Encouragingly, Nigeria's banking sector shows a modest proportion of foreign liabilities to total funds, at 8.9% in December 2019. 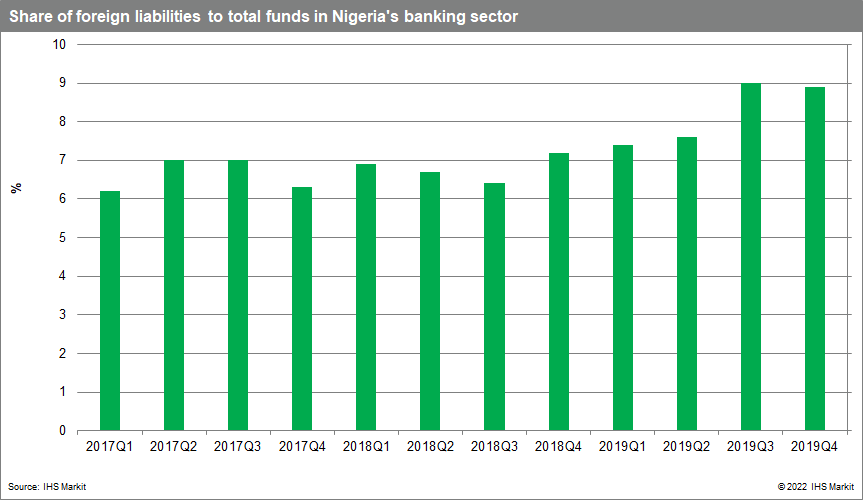