The ascent of APAC in the global economy

The economic weight of the APAC region is forecast to rise by 2040, underpinned by the economic expansion of mainland China, India, and the 10 Southeast Asian countries comprising the Association of Southeast Asian Nations (ASEAN). 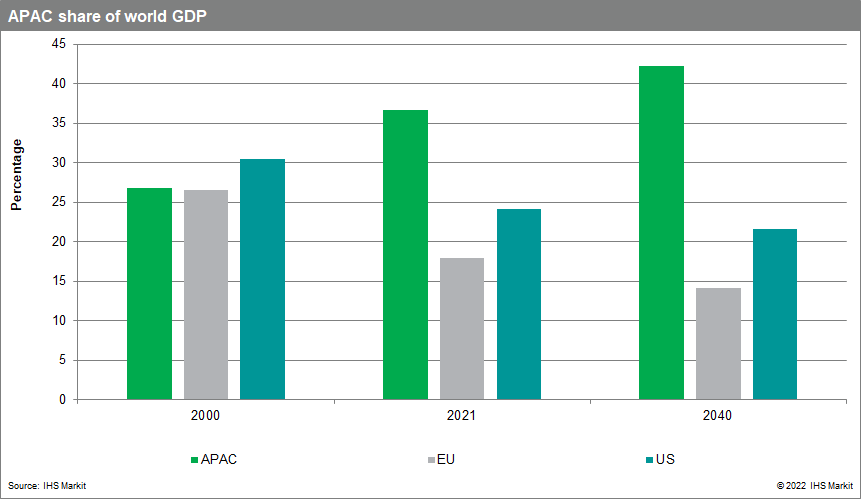 This Eastern expansion has far-reaching implications for multinationals worldwide. The rapid growth in household incomes of Asia's populous emerging markets of China and India will be key drivers for world consumption growth. In addition, consumer markets in populous Southeast Asian nations — notably Indonesia, Philippines, and Vietnam — will also grow at a rapid pace. 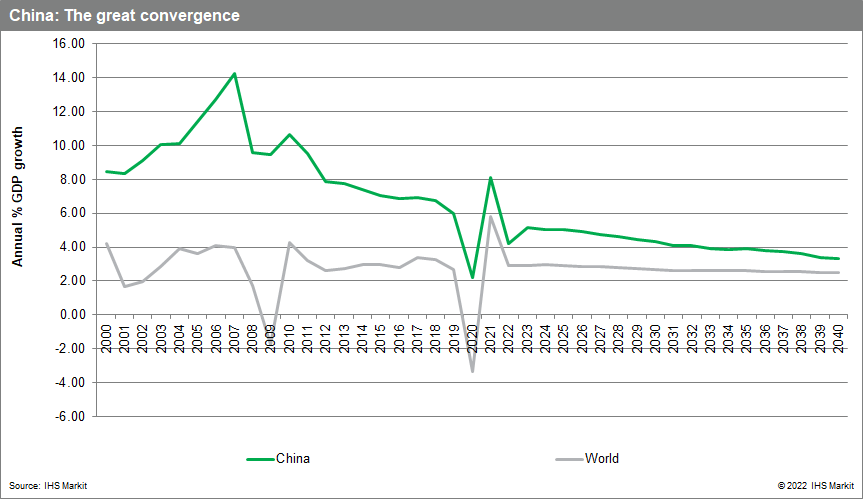 More youthful demographic profiles in other major Asian emerging markets, notably in India, Indonesia, Philippines, and Vietnam, will help to mitigate the impact of aging demographics in Northeast Asia. Consequently, overall APAC economic growth is forecast to continue to outpace global growth over the next two decades, helping to drive APAC's continued economic ascendancy in the world economy.

Rapid growth in India's economy is expected to resume over the medium-term outlook after disruptions owing to the COVID-19 pandemic in 2020-21. The latest S&P Global PMI survey data for India indicate that a strong economic rebound has been underway during the first half of 2022.

Service sector growth continued to strengthen in May 2022, with companies reporting the quickest increase in business activity since April 2011. The upturn was supported by a substantial pick-up in new business growth as demand continued to recover following the reopening of the economy after COVID-19 lockdowns.

Over the past two decades, the size of India's economy has risen from 1.4% of world GDP in 2000 to 3.3% by 2021 and is projected to rise further to 7.4% by 2040. Also by 2040, India's GDP is projected to overtake both Germany and Japan, which would place India as the world's third largest economy after the US and China.

The ASEAN region comprising 10 nations of Southeast Asia had a combined GDP of USD3.3 trillion in 2021, amounting to 3.4% of world GDP.

Improving domestic demand in ASEAN has helped to support the rebound in economic growth momentum during the first half of 2022. Over the long-term, the ASEAN region is expected to overcome the protracted negative economic shocks caused by the COVID-19 pandemic and continue to be one of the fastest growing regions of the world economy. This rapid pace of growth will be driven by both exports and domestic demand.

Over the next two decades, other fast-growing Asia-Pacific markets, notably China and India, will provide a boost to ASEAN's exports. Mainland China and Hong Kong SAR together accounted for 22.6% of ASEAN exports of goods in 2020. Intra-ASEAN trade is also increasingly important, with intra-ASEAN exports accounting for 21% of total ASEAN merchandise exports in 2020.

Helped by this combination of growth drivers, total ASEAN GDP measured in nominal USD terms is forecast to more than quadruple over the next two decades, increasing from USD3 trillion in 2020 to USD13.3 trillion by 2040. This will make the combined GDP of the ASEAN economies much larger than the GDP of Japan or Germany by 2040, highlighting the increasing importance of ASEAN region as one of the world's largest consumer markets. By 2040, ASEAN's share of world GDP is projected to increase to 5.4% of world GDP.