The independent power sector of the U.S. –also known as merchant power—is faced with an unappealing buffet: low power prices, tepid demand growth for electricity, and (mostly) government-mandated or subsidized renewables cutting into demand while at times creating havoc with the grid. On top of that, the standard model for merchant power is to sell electricity into the open market, without the standard retail distribution network that is at the base of their regulated utility counterparts.

In a pair of recent papers—which can be found here and here--S&P Global Ratings’ senior director of ratings Aneesh Prabhu and several colleagues, including analyst Michael Ferguson, looked at the current state of the IPPs, as they are known. It’s an industry undergoing significant shifts, and Director of Global Market Insights John Kingston spoke to the two of them about its current condition.

Kingston: The price of the primary fuel for many IPPs, natural gas, continues to be soft. Why hasn’t that opened up margins for independent power producers, enabling them to capitalize on the long-term decline in the cost of their primary feedstock?

Prabhu: They’re experiencing a double whammy. The price of power is the sum total of the price of natural gas times what is called the market heat rate. Simply stated, this is defined as the efficiency at which the marginal generation plant converts the calorific content of the fuel into electricity.

Ferguson: The market heat rate becomes, in a sense, a proxy for the reserve margin and thus, the demand for electricity in the market. A market with rising demand will push that market heat rate up, which will push the power price up. But that hasn’t transpired in the last few years because demand growth has been a bit weaker than expected.

Prabhu: You have a compounding effect. You have fuel prices declining and also you have the market heat rate declining because of demand decimation. That results in low power prices. 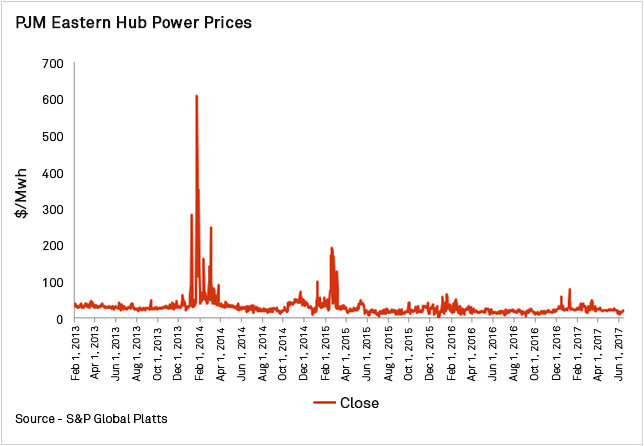 Kingston: That sort of situation is probably facing all generators in the country, including the utility sector. But they aren’t viewed as being in the same sort of straits as the merchant power sector. Why is that?

Prabhu: The less efficient plants are inevitably owned the IPPs. Additionally, the diversified companies have the benefit of having a regulated arm. So what you lose on the unregulated side, you could potentially gain on the regulated side. For example, transmission and distribution related rate base increases are more palatable when generation prices are lower. The guys on the wholesale side, the merchant generators, are facing a number of issues. They are long power, which is declining in price, because it’s exposed to the price of natural gas. Wholesale power prices are merely reflecting the cost of the marginal production of gas. The IPPs are price takers, so they don’t control either the prompt price or the curve, which is in backwardation, with further-out prices lower than current prices. IPP’s are long demand growth, which is declining. They are long capacity prices, where they are either competing with subsidized renewable generation or increasingly efficient gas turbine technologies.

Kingston: Your research papers also discuss how political and environmental goals are creating a further “ganging on” of the problems affecting the merchant power sector.

Ferguson: In the short term you end up oversupplied in California, so prices have collapsed there. It is partially due to market reasons but also to policy reasons in that state. But it’s other areas as well.

Prabhu: Except for ERCOT (Texas), which is still seeing secular demand growth, all other markets-- New England, the PJM market in the mid-Atlantic--have seen demand retreat for the past 3-4 years. That decline in demand goes directly to price. Again, this is more amplified for coal-fired generation which gets completely displaced on the supply stack by lower variable cost gas-fired units. And on top of that, the weather hasn’t cooperated in some time. Some of these areas need a hot summer. We’ve seen capacity factors for coal-fired units go off the cliff over the past 3-years.

Kingston: The growth in renewables is misleading when you look at the numbers. Renewables as a percentage of total power generation has not risen by a huge amount, but at times, it can provide an enormous percentage of power to a specific grid. What sort of problems is that causing for the IPP industry, which is designed to produce non-intermittent power, as opposed to the intermittent feature of renewables?

Prabhu: Renewables have become very disruptive. You have a lot of wind generation at night which affects baseload generation. You then get negative pricing in the market, where the price of power is literally less than zero. But a baseload generator, like a merchant power plant, is often not capable of ramping down. By definition they are providing baseload power so they should be running flat out.

Ferguson: The way we look at this for conventional generators is it’s not gross demand that matters, it’s net demand. Renewables eat into that. Because renewables will generate when the wind or solar resource is present, they are seen as baseload. So demand is calculated net of renewable generation, in other words, requirements for other sources is after factoring what renewables are providing. We consider renewables to be something that eats into demand. Something like wind operates against a production tax credit that subsidizes its operation, so the bidding economics for putting power into the market are different than they are for a conventional generator. That very much affects IPP economics.

Prabhu: The production tax credit for wind is about $23/Mwh, and the wind unit has to produce in order to get the production tax credit. If the market signal is a negative $10/Mwh price, it will still generate because it gets the $23 credit. So technically, it can produce all the way down to negative 23. It’s another aspect contributing to the distorted market.

Ferguson: These conditions particularly affect nuclear. You can’t just shut them down when power prices are low. They have massive fixed cost structures and they have power prices that are $10-$15/Mwh too low for them to make a profit. That ends up prompting a political argument, because these nuclear plants employ so many people. A typical nuclear plant might have 1,200 to 1,400 people working at a site. So New York and Illinois are already, and potentially Pennsylvania, Ohio and New Jersey, talking about putting subsidies in place. To these local communities this is a significant component to their tax base, and if they’re closed, this is often tantamount to shutting these towns’ economies.

Prabhu: If you put all these decisions in the hands of the Federal Energy Regulatory Commission, they’re only going to be concerned about competitive markets. When you put it in the hands of the state, it becomes all about fuel diversity and it becomes about jobs. A perfect example is the Fitzpatrick plant in upstate New York that was recently taken over by Exelon from Entergy, preserving about half of the town’s jobs. But that only happened after New York promised 12 years of nuclear subsidies. At Fitzpatrick, the subsidies are going to be about a third of the revenues the plant is currently generating. But the Pilgrim plant in Massachusetts only accounts for about 5% of local employment, and it is going to be shut in 2019.

Kingston: It’s not likely that this industry is going to be rescued by a sudden turn in power margins. What’s the way out for this sector?

Prabhu: Retail becomes your hedge. You don’t have as significant liquidity requirements, because you’re selling it to the retail customer, and retail customers are “sticky.” Typically the types of contracts you enter into on a retail level are at a much higher value than on the wholesale market. Earlier, this was a strategy to diversify. Now it’s a survival strategy. If a company is exposed only to the wholesale side, it is a price taker. But if you have a retail base, you create an effective hedge. Traditionally, retail margins expand as wholesale markets decline. The smarter ones went out and did this and bought some distressed retail businesses, like the NRG acquisition of Reliant Energy’s retail business back in 2009. They turned things around and had payback in six months. The latest was the Calpine acquisition of Noble Americas Energy Solutions late last year. The multiples have gone up. NRG paid about 1.5 to two times the book value in 2009 for Reliant’s retail business, and now these deals are going at 8-10 times.

Kingston: Hedging has always been a key component of the business plan for these companies. Has that changed?

Prabhu: Hedging just gives you time to correct your capital structure. Because of a lot of regulations, whether it’s Dodd Frank or other rulemaking, a lot of banks have exited the business, so you don’t get the good hedging and price discovery three years out. You don’t have enough counterparties. You’ve lost the long term hedge completely. This has resulted in shorter term hedges, which increases the inefficiencies. The maximum you can look at now is about four years. The market also has been in backwardation for years, with the out months cheaper in value than the current price. (Editor’s note: in physical commodities, that usually is seen when the market is tight. But since electricity can not be stored, a backwardation in the electricity markets is not the same as a backwardation in a physical commodity market). But by getting into retail markets, they are finding ways to get some of that back. We are starting to see retail customers come in and ask for 5 or 10 years of pricing guarantees, and that is very similar to a long hedge for an IPP. 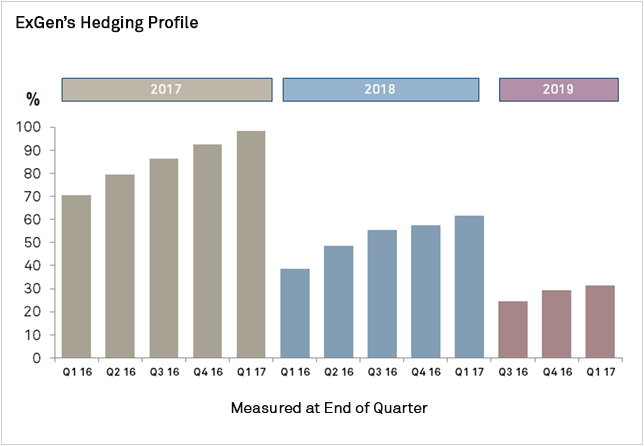