As China’s LNG demand grows, pressure to turn domestic gas sector liberalization guidelines into policy and push for greater flexibility in international supply agreements will follow, with challenges and opportunities for all LNG stakeholders

China’s coal-to-gas conversion policies, GDP expansion and industrial recovery are increasing the country’s gas consumption to record highs. With domestic output and pipeline imports unable to keep up, LNG is needed to bridge this gap.

In 2017, China became the largest contributor to global LNG consumption growth, surpassing South Korea as the world’s second biggest LNG importer, and its share of global LNG demand is expected to converge with that of Japan by 2030.

The country’s spot requirements are also growing, as its contracted obligations rise much slower than its demand projections, meaning Chinese importers will play an increasing role in global LNG market fundamentals and prices.

As the share of LNG in China’s gas consumption rises, domestic competition grows, and a robust LNG benchmark emerges, the erosion of the traditional oil-linked LNG supply model becomes inevitable, in favor of deals that are shorter, smaller and more flexible, and priced not against an associated commodity but LNG itself.

China’s policy directives are encouraging coal-togas switching to combat air pollution and are set to continue driving up the share of natural gas in the country’s energy mix and domestic consumption of the fuel.

China’s expanding economy and the revival of its industrial activity have also been key drivers of energy and gas consumption growth over the past year, and could play an even bigger role than fuel conversion programs in boosting demand looking forward.

The National Development and Reform Commission forecasts Chinese annual gas demand to nearly double from 237 Bcm in 2017 to 450 Bcm by 2030. 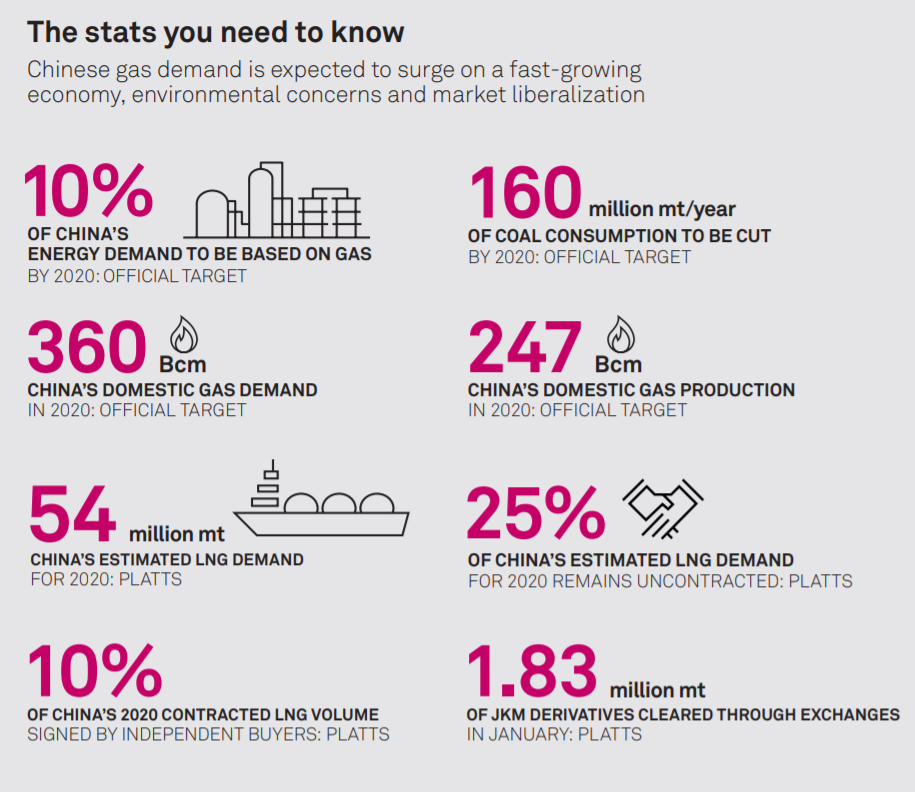