With European markets already contemplating a shortage of energy supplies this winter, unusual activity and disruptions in vital energy infrastructure in the North and Baltic seas have markets spooked and governments on high alert. The Russian invasion of Ukraine has created serious disruptions in energy markets. Sanctions, slowdowns and suspensions are threatening shortages of natural gas and oil just as Europe enters the winter months. Now, a series of mysterious incidents is heightening concerns.

On Sept. 26, three leaks were detected in the Nord Stream 1 and 2 pipelines that link Russia and Germany. A fourth leak was later detected. At the time, neither pipeline was delivering natural gas to Europe. The Russians had suspended deliveries via the Nord Stream 1 pipeline on Aug. 31, blaming maintenance issues. Nord Stream 2 never began commercial operations. European officials indicated the damage to the pipelines was a “deliberate act,” implying the leaks resulted from sabotage aimed at further restricting European energy supplies. Natural gas prices surged in the aftermath of the incidents.

Russian government spokespeople were quick to deny any involvement. "It is quite predictable, and it is also predictably stupid and absurd to express such versions," Kremlin spokesman Dmitry Peskov said Sept. 28.

On Sept. 29, NATO vowed to respond to deliberate attacks on critical energy infrastructure. Norway, Western Europe’s largest producer of oil and natural gas, announced it is raising its emergency preparedness following sightings of unidentified drones close to offshore oil and gas facilities. The U.K. Ministry of Defense is also monitoring its own offshore oil and gas facilities in the North Sea.

“The supply picture is looking less certain in both the North Sea and the Mediterranean,” said crude oil pricing specialist David Lewis during a recent S&P Global Commodity Insights podcast interview. “Just on Sept. 27, the Troll field operator Equinor released a voluntary cancellation or reduction for the Troll fields. No reason was given. This also comes at a time of quite political and security concerns throughout the North Sea.”

Germany and other European nations have been looking to non-Russian sources of oil since the war in Ukraine began. In addition to Norway and the U.S., Germany has increased crude purchases from Canada, Algeria, Saudi Arabia, Cameroon and Libya. EU member states have focused on reducing natural gas consumption in anticipation of shortages this winter. Monika Zsigri, head of unit at the energy directorate of the European Commission, described the natural gas situation for the winter months as “manageable” at a recent Eurogas webinar, but warned against complacency. Further disruptions to supply or energy infrastructure could change that outlook.

Today is Friday, September 30, 2022. The next edition will publish Tuesday, Oct. 4. Here is today’s essential intelligence.

Economic Research: Global Macro Update: Many Routes To The Bottom 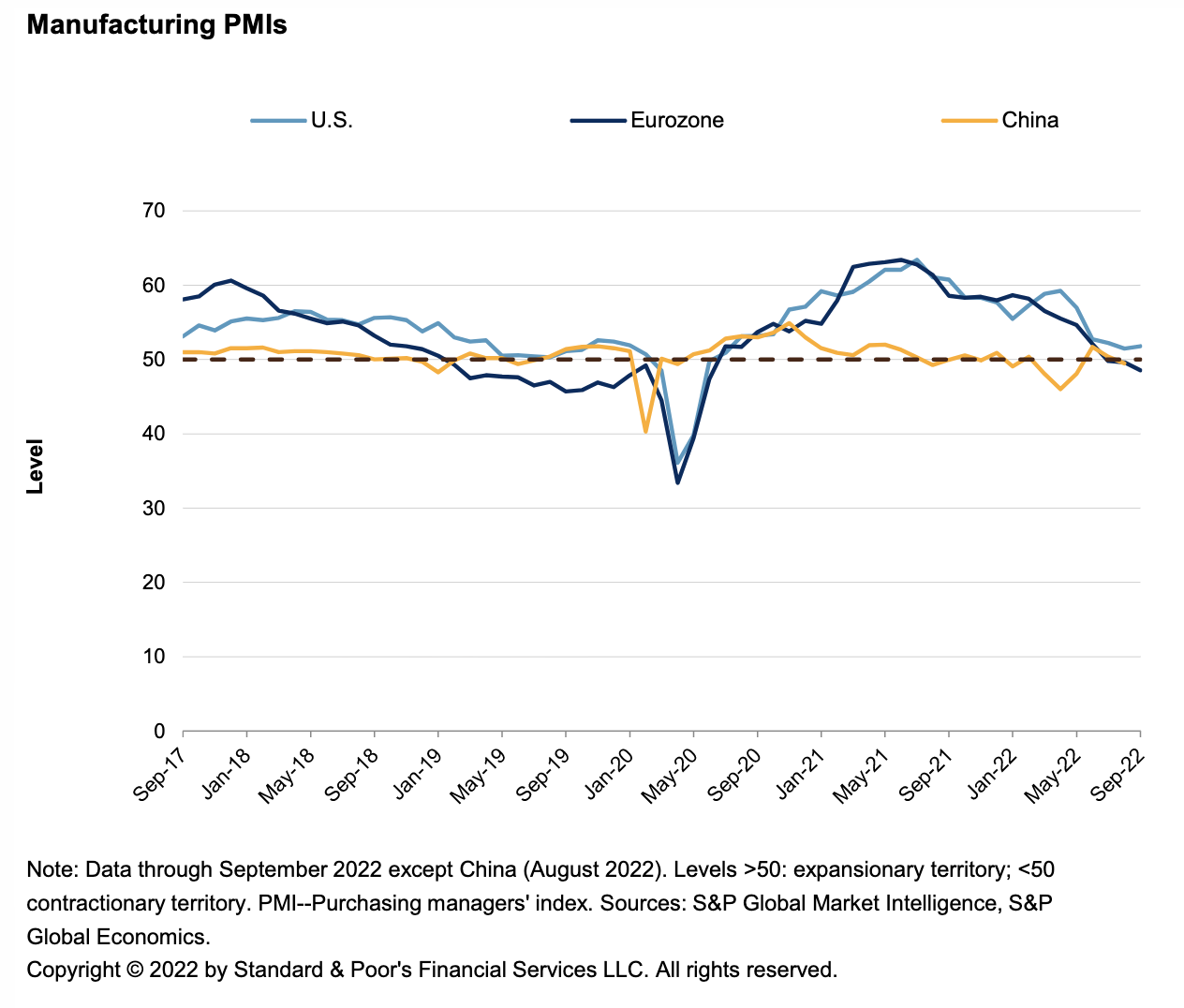 Rising rates, increased European energy insecurity, and the lingering effects of COVID-19 are hitting growth almost everywhere; Asia-Pacific remains a relative outperformer. As central banks aggressively raise rates to fight inflation, S&P Global Ratings’ confidence is waning that they can avoid generating a sharp downturn; indeed, it is now expecting a mild recession in the U.S. The key variable is labor market performance, which has so far remained robust. 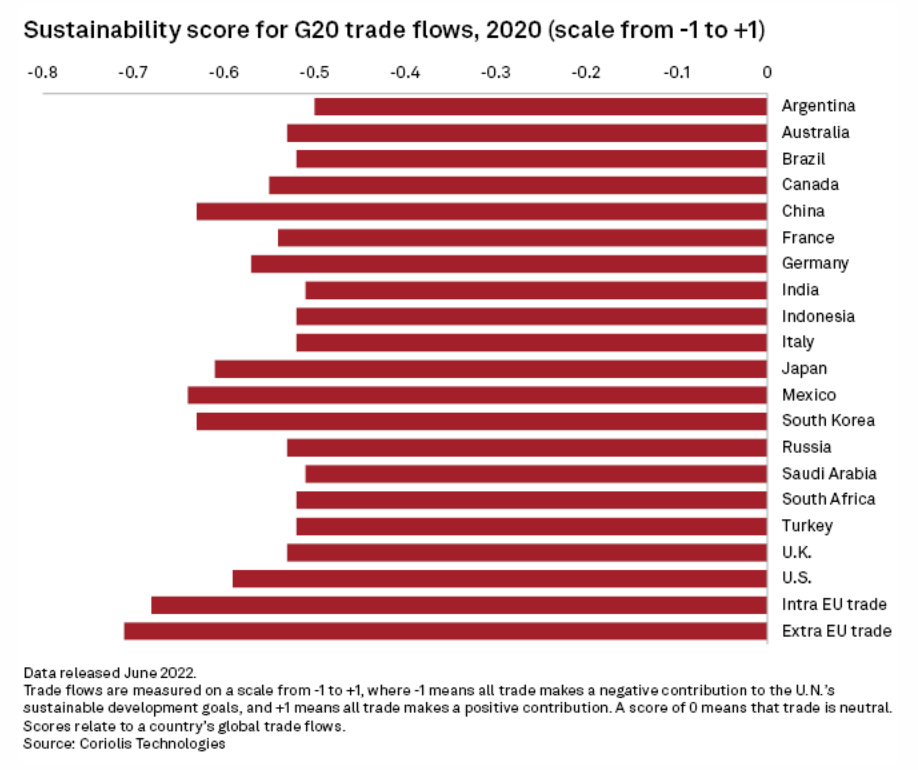 As banks expand their sustainable trade finance offerings to meet growing corporate demand, they face a challenge to ensure that stricter environmental, social and governance criteria do not worsen the trade finance gap by cutting off access to financing for companies that need it most. "We need an honest debate about this. Yes, it could potentially widen the trade finance gap," Rebecca Harding, CEO of trade data provider Coriolis Technologies, told S&P Global Market Intelligence on the sidelines of the International Trade and Forfaiting Association's annual conference on Sept. 8. "But, equally, if trade finance is doing its job properly, what it could do is create a transition."

The strength seen across European and African crude oil markets in the spring and summer has largely been eroded as focus shifts to the potential demand reduction caused by economic slowdowns. There are some potential headwinds on the horizon that could shift this more bearish picture however, with multiple supply disruptions hitting the North Sea, Mediterranean and West Africa. In this episode of the Platts Oil Markets Podcast, S&P Global Commodity Insights editors David Lewis and Sam Angell join John Morley to discuss the latest news shaping European crude markets.

5 Questions On The Road From Climate Week To COP27

Climate Week wrapped up last week in New York City. Climate Week convened leaders from business, government and the climate community through hundreds of events held across New York City with the goal of driving climate action. How did it play out, and what questions are we asking heading into COP27, the United Nations Climate Conference taking place in November? 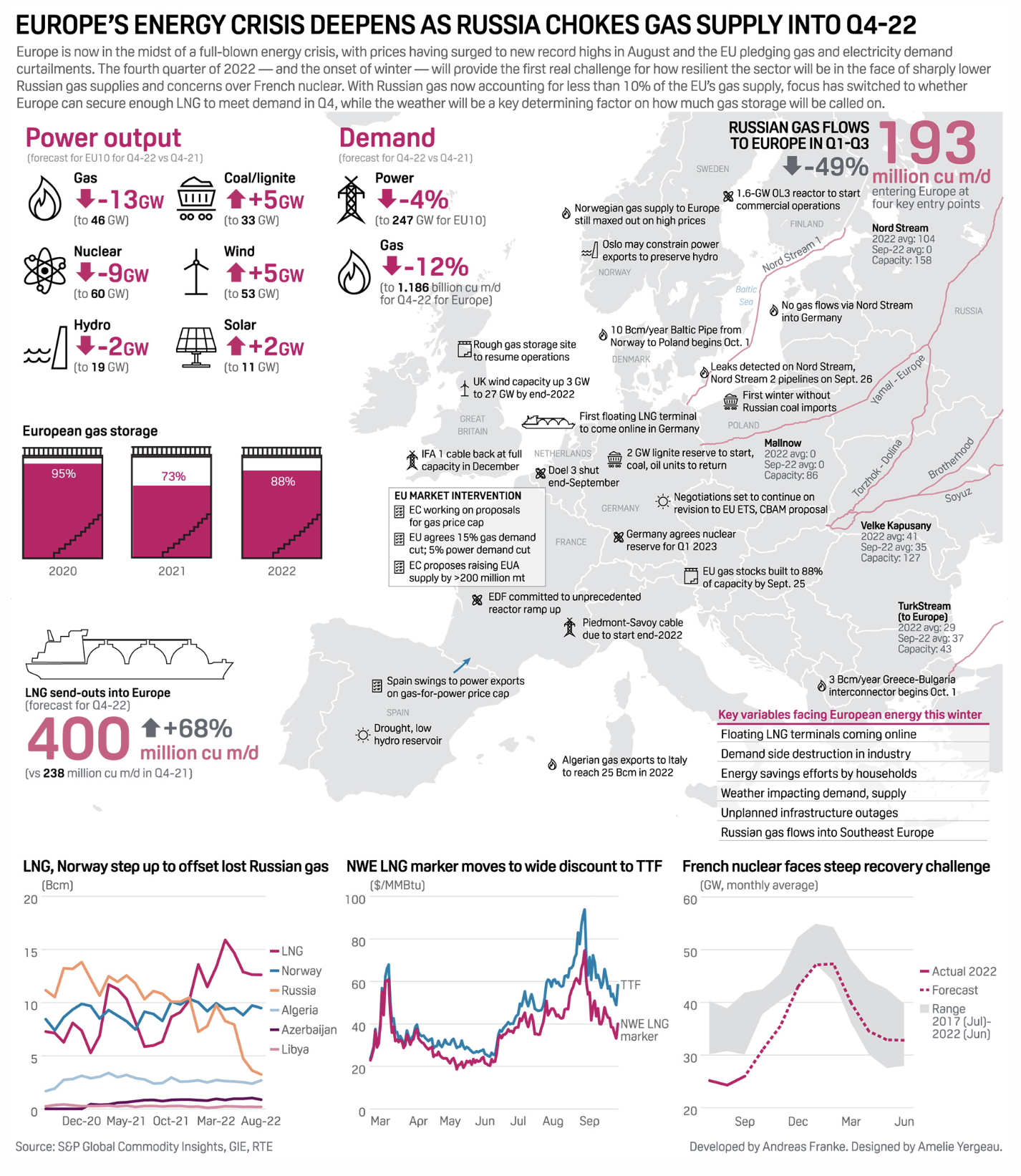 Europe is now in the midst of a full-blown energy crisis, with prices having surged to new record highs in August and the EU pledging gas and electricity demand curtailments. The fourth quarter — and the onset of winter — will provide the first real challenge for how resilient the sector will be in the face of sharply lower Russian gas supplies and concerns over French nuclear.

On this week’s episode of Autology, three members of the S&P Global Mobility Battery team discuss the battery raw material domain and give a global outlook on the supply chain. Battery raw material sourcing is undoubtedly one of the biggest talking points in the automotive industry right now, and they take a dive into the regulations and the complications these are having on the upstream suppliers, the solutions to challenges and concerns, as well as a first look into the newly published Battery Raw Material forecast launched in September.

—Listen and subscribe to Autology, a podcast from S&P Global Mobility