While much of the world is rebounding from the COVID-caused economic downturn, global supply chains are under continuing pressures from pandemic-prompted changes in consumption patterns, surging demand for goods, shortages of workers, and pre-existing political pressures—leading to high shipping volumes and freight costs.

Retailers have been confronting serious disruptions across every stage of their supply chains alongside compounding pent-up demand, higher prices due to inflation, worker and truck-driver shortages, and overwhelmed ports that have all backlogged deliveries by weeks or months, according to S&P Global Ratings. Experts interviewed by S&P Global Market Intelligence believe that larger retailers may better weather the storm of supply problems throughout the holiday season than smaller merchants. But conditions are also likely to persist. After consumer spending surged in September and holiday shopping began as early as October, many market participants foresee the merchandise supply-and-demand imbalance enduring into 2022.

The world’s largest shipping company, Maersk, expects the “exceptional” market situation to continue until at least the first quarter of next year, according to S&P Global Platts. Such an outlook signals additional stress on skyrocketing input and freight costs, surging shipping volumes that are creating bottlenecks, and worsening lead times for commodities and goods.

"Demand for products is at an all-time high,” Jason Stuckey, general manager of the e-commerce service Linnworks, told S&P Global Market Intelligence in a recent interview. “It's the supply that is dwindling.”

"Amazon and large players like Walmart Inc. and Target Corp. are going to be much better positioned to use their clout and their negotiating sway to get first pick for a lot of items," Tim Campbell, director of industry insights at the e-commerce management platform CommerceIQ, told S&P Global Market Intelligence. "A lot of the smaller regional players are going to get whatever is left over."

Beyond merchandise, semiconductors and energy commodities have been particularly caught in the tangled web of supply disruptions and delays—affecting everything from smartphones and vehicles to petroleum and batteries worldwide. More pronounced consequences could materialize if the situation proves more permanent.

“The intensifying semiconductor shortage has led us to revise downward our projections of a global light vehicle sales recovery to 2%-4% this year and 4%-6% in 2022. We currently don't expect the supply-chain disruptions will affect ratings on global auto manufacturers, but there could be a credit impact for auto suppliers, particularly those at the lower end of the rating scale,” S&P Global Ratings said in a recent report. “S&P Global Ratings still considers the semiconductor crisis as a temporary supply shock at this stage, exacerbated by other negative events this year that have also led to unexpected production downtime. However, a more prolonged crisis, with major production shortfalls exceeding S&P Global Ratings' 2022 horizon, could lead to more profound revisions to our forecasts of issuers' earnings and cash flows, which could increasingly affect ratings.”

Today is Monday, November 22, 2021, and here is today’s essential intelligence. 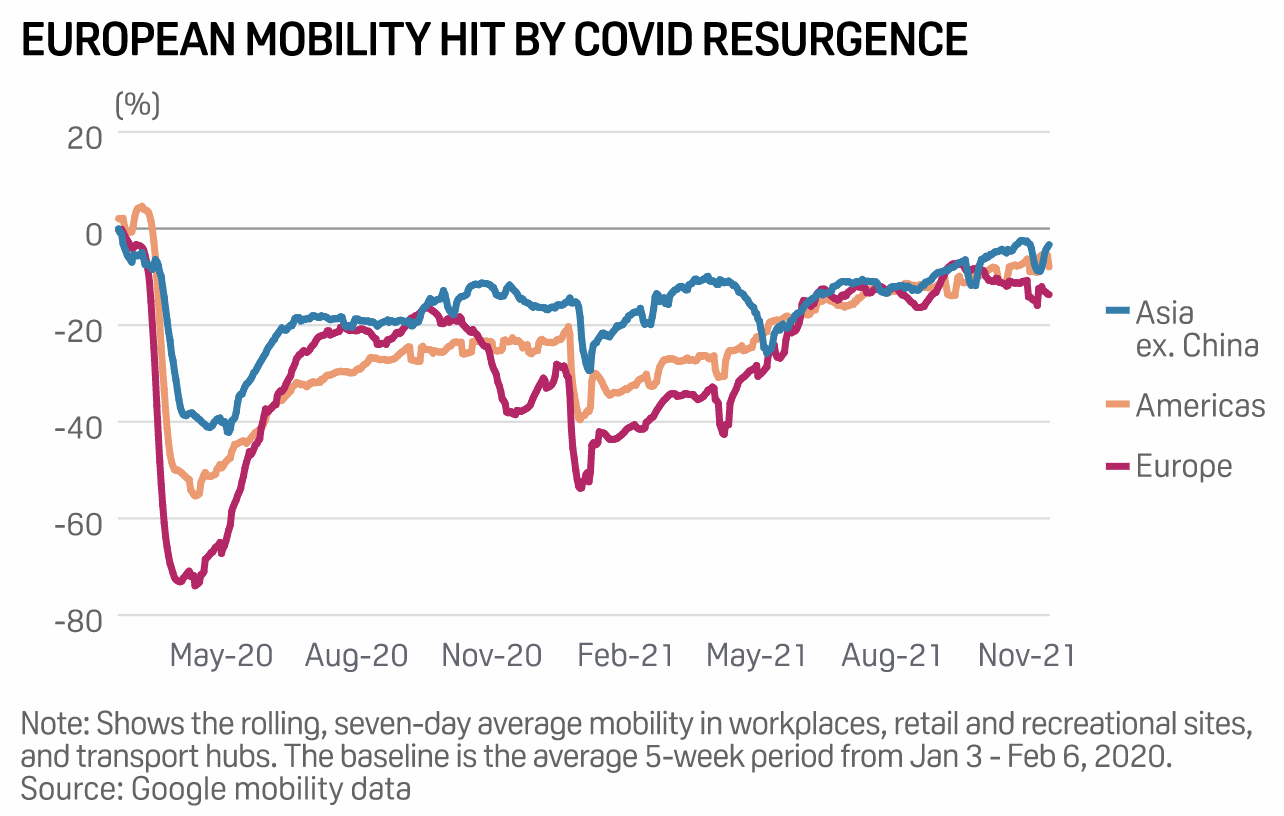 An Overview Of Australia's Housing Market And Residential Mortgage-Backed Securities 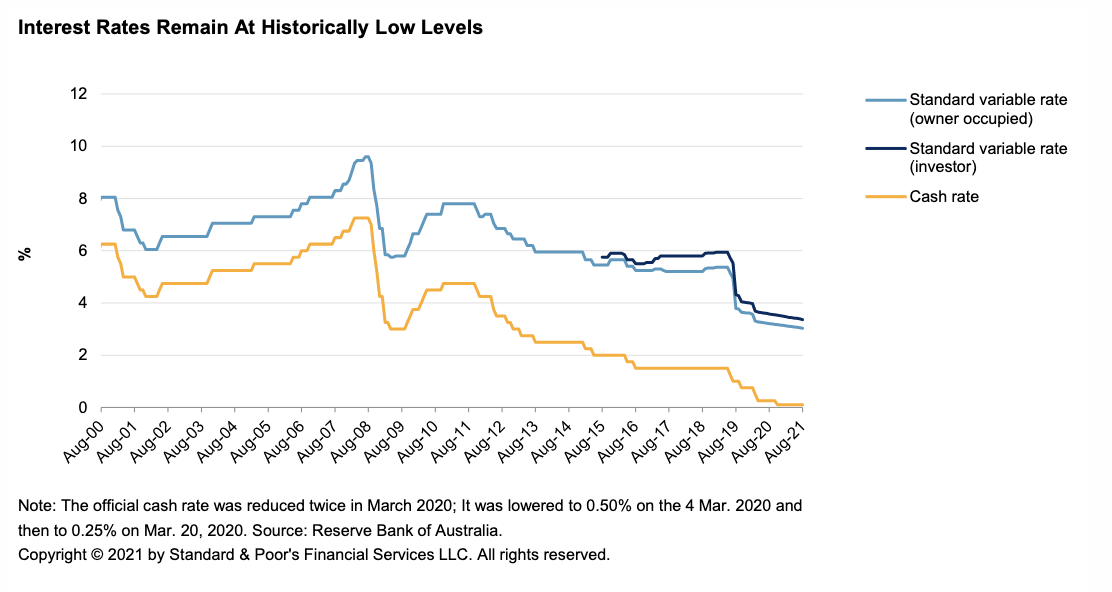 The Australian residential mortgage-backed securities sector has emerged from the pandemic relatively unscathed. Low interest rates, strong property price growth, and competitive lending conditions have supported households' debt serviceability. Household balance sheets have benefited from government income-support measures, and a shift to saving during the COVID-19 pandemic has enabled many borrowers to build up repayment buffers. 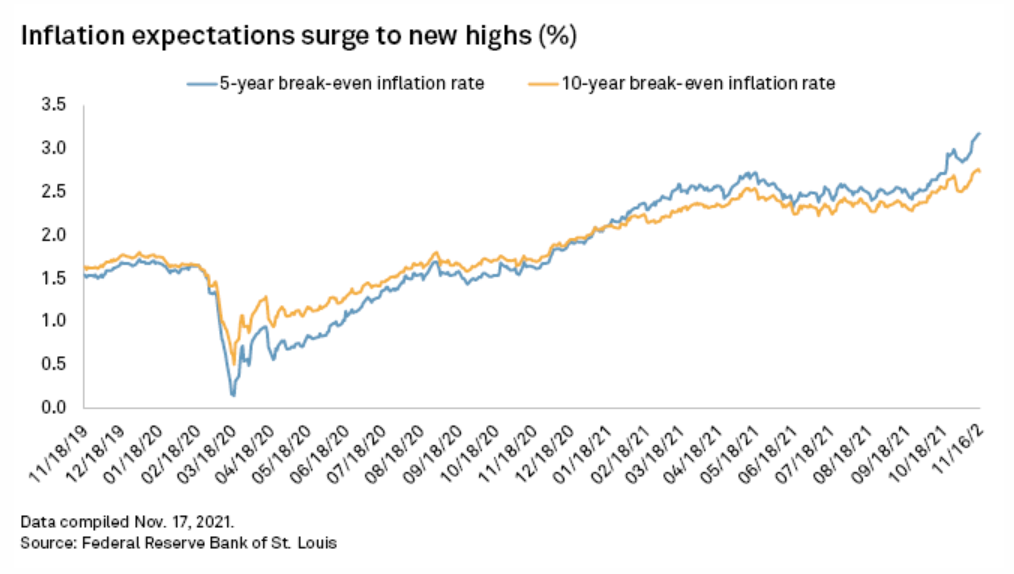 In October, the Consumer Price Index, the market's preferred inflation metric, jumped 6.2%, the highest year-over-year increase since November 1990. The five- and 10-year break-even rates, a rough measure of the bond market's view of short- and long-term inflation, have surged to new highs, up 122 and 78 basis points, respectively, since the start of 2021. 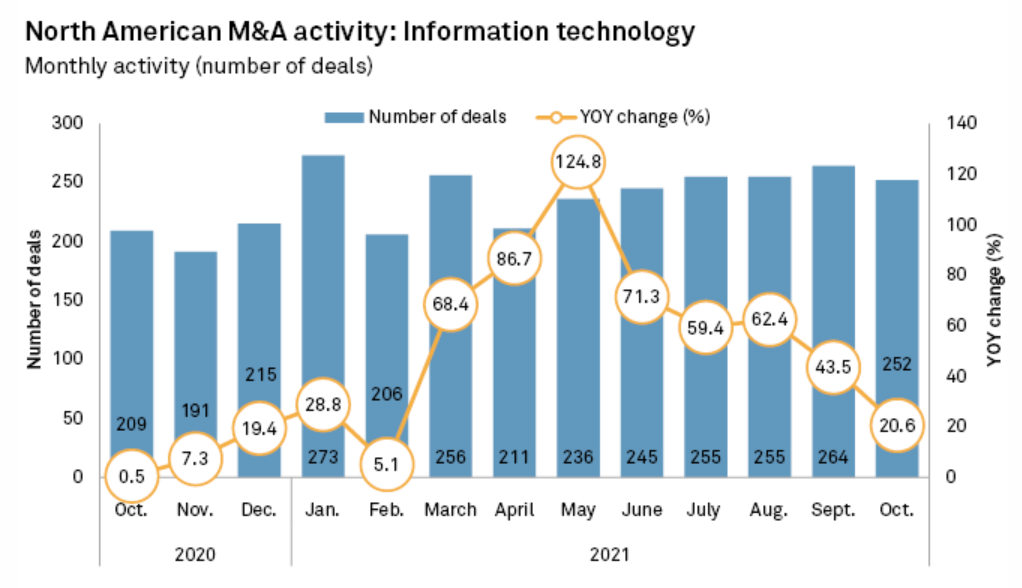 M&A activity in the sector was up 20.6% year over year in October with 252 deals recorded by S&P Global Market Intelligence. The jump in activity is notable because M&A activity had returned to normal by October 2020 after a pandemic-related dip. The 209 transactions recorded a year ago were 0.5% more than the same month in 2019, itself a healthy year for information technology deal activity. 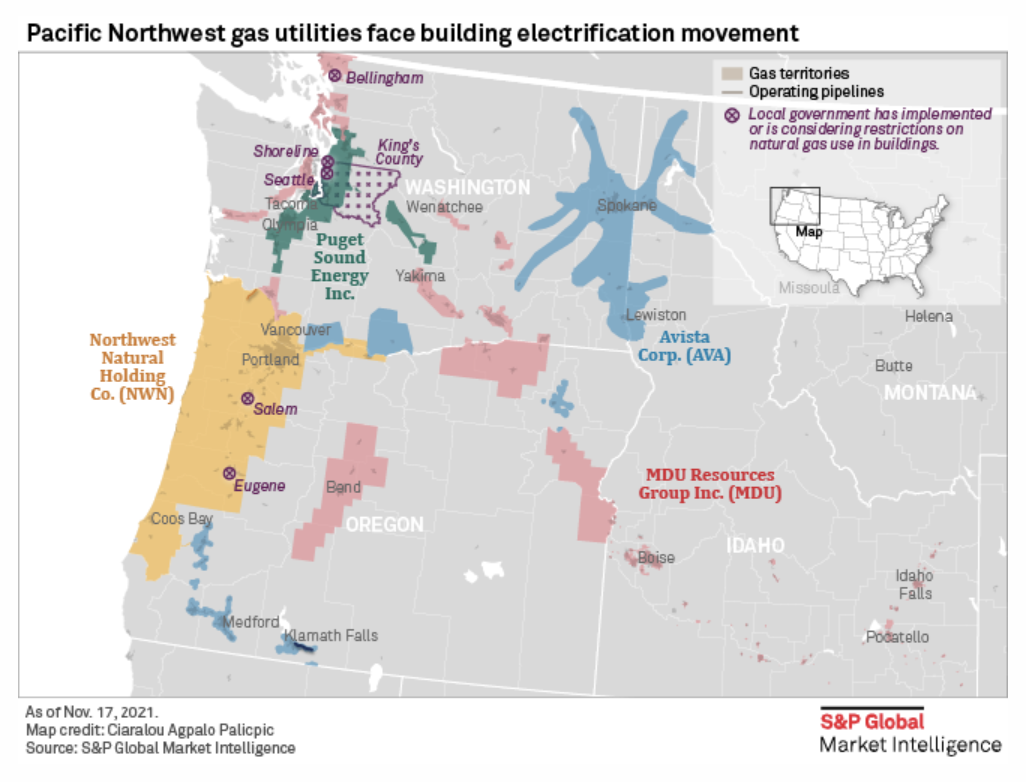 The West Coast movement to transition buildings away from natural gas heating gathered steam as lawmakers in Eugene, Ore., moved toward developing an ordinance requiring new buildings to be all-electric.

Article 6 Most Prominent Contribution Is The Rationalization Of Carbon Markets

The recently implemented Article 6 of the Paris Agreement paves the way for the simplification of carbon markets and therefore the gradual merger of government-led schemes and voluntary carbon schemes, industry players have said.

The U.S. House of Representatives narrowly passed a nearly $2 trillion budget reconciliation bill that, if enacted, would offer a big hand to the country's efforts to slash climate-warming greenhouse gas emissions, particularly from the energy sector.

Carbon capture and storage played a large role in Lease Sale 257, which recorded a bumper crop of bids from oil and gas producers Nov. 17 for drilling rights in the U.S. Gulf of Mexico. Of the 317 bids the Bureau of Ocean Energy Management received—the highest since 2014—about 140 of them were for tracts located in shallow waters of the Texas and Louisiana coast, inexpensive areas with depleted oil and gas reserves.

Blackouts During Extreme Weather Still A Risk This Winter: NERC

Energy emergencies can be expected in Electric Reliability Council of Texas, Southwest Power Pool, and Midcontinent Independent System Operator if there is another event like the February cold snap, North American Electric Reliability Corporation said in its Winter Reliability Assessment. And in the Northwest and Rocky Mountain region, low hydro and predicted colder weather could cause problems, it said.

India's state-run coal companies are aiming to install 5.56 GW of renewable power capacity by 2030 and take other measures designed to cut CO2 emissions in line with recent pledges made at the UN Climate Change Conference in Glasgow, the Ministry of Coal said in a statement Nov. 18.

A nearly 40-year-old coal advisory council to the U.S. federal government will cease to exist as of Nov. 20 if the Department of Energy does not take action—and the agency has been silent on the body's fate. Congressional Republicans sounded the alarm on the potential loss of the charter with a letter in October proclaiming the need to preserve the volunteer group.

A pipeline for delivering up to 100,000 b/d of crude oil from Neuquen, the largest source of crude in Argentina, to Chile is poised to start operations next year, boosting expectations of an increase in crude exports as production rises in the Vaca Muerta shale play, Neuquen Governor Omar Gutierrez said.

Russian Gas Flows Into Ukraine Back To September Levels, More Through Sudzha Seen

Russian gas flows into Ukraine through the Sudzha and Sokhranivka interconnection points have been running around the 110 million cu m/d mark since the Nov. 10 gas day, after having fallen back to as low as 58 million cu m on the Nov. 1 gas day, GTSOU data showed.

The International Grains Council has reduced its estimate for global grain production by 3 million mt to 2.287 billion mt for the marketing year 2021-22, according to its monthly outlook released Nov. 18. The production estimate has been cut largely due to a reduction in global wheat output. The council also reduced its global grain consumption projection by 1 million mt from its October estimate to 2.290 billion mt for MY 2021-22 due to an uptick in corn production.