As the coronavirus pandemic paves a rough road forward for the automotive sector, Tesla Inc. is revving its electric engines. The company reported $6 billion in revenue and $104 million in net profit in the second quarter—marking four consecutive profitable quarters and signaling a sustainable future for the entire industry.

“Our business has shown strong resilience during these unprecedented times,” the company said in its earnings report. “We believe the progress we made in the first half of this year has positioned us for a successful second half of 2020. Production output of our existing facilities continues to improve to meet demand, and we are adding more capacity.”

Tesla’s adjusted earnings per share without stock-based compensation for the quarter was $2.18, compared with S&P Global Market Intelligence’s average consensus estimate for a normalized loss of 16 cents. After reporting a full year of profitability, the company can now be considered for inclusion in the S&P 500 benchmark index.

The company increased its cash flow and equivalents quarter-over-quarter by $535 million, to total $8 billion. “A higher percentage of deliveries occurring towards the end of the quarter compared to prior quarters, as well as an increase in government rebates and regulatory credit receivables, which are paid in accordance with their payment terms,” hurt the company’s free cash flow, the earnings report said.

While Tesla said on July 2 that it delivered 90,650 vehicles in the second quarter, the company stated that despite production disruptions due to the pandemic it has capacity to exceed 500,000 vehicle deliveries this year, on par with its goal to deliver half a million vehicles by year-end.

S&P Global Ratings anticipates global light vehicle sales to decline 15-20% year-over-year due to the crisis, with the worst of the slump in the second quarter.

"The market is open to investing in these companies because the trend towards electric seems to be so powerful," Gary Silberg, Americas head of automotive for KPMG, told S&P Global Market Intelligence in a July 22 interview. "I think there is an appetite from investors to take more risk and fund these new entrants.”

Other auto makers may not fare as well as electric vehicle producers like Tesla. Analysts interviewed by S&P Global Market Intelligence said that the second quarter was the most devastating they had seen in their careers, due to the detrimental effects of countries’ lockdowns and shuttered global automotive manufacturing and retail.

"It's not like a normal recessionary scenario where the recession slows activity. This has dropped vertically,” Owen Edwards, an associate director in the automotive unit at the accountancy firm Grant Thornton, told S&P Global Market Intelligence on July 1. “That's why we're in unknown territory to a certain extent. I would ignore the profitability. It's a question of 'are they cash-strong?' ... Cash management is absolutely critical at this time in order for companies to survive and thrive."

Today is Thursday, July 23, 2020, and here is today’s essential intelligence. Amid a tumultuous quarter for the energy sector, including a collapse of oil prices in April that briefly pushed futures into negative territory, most U.S. banks reported linked-quarter declines in their energy loan concentration metrics. Among 11 banks that have reported energy exposures as of July 20, Zions Bancorp NA was one of just two banks to report a quarter-over-quarter increase in energy loans as a percentage of total gross loans. First Horizon National Corp. was the other bank to post a modest increase in energy exposure.

Probability of default for Italian financials falls in July

The first article in S&P Global Market Intelligence’s “When Sovereigns Default” series looked at the need for bondholders to keep a close watch on the credit risk of individual countries around the world given the negative economic impacts seen as a result of COVID-19. The second article presented estimates of loss given default (LGD) for 121 rated countries under a COVID-19 scenario, pinpointing areas of potential concern. LGD is an estimate of the portion of an exposure (bond or loan equivalent) that will likely not be recovered in the event of default, and was calculated using our Sovereign LGD Scorecard. This Scorecard produces estimates of LGD that are point-in-time (PiT), reflecting current economic conditions – an essential approach during a pandemic. The PiT feature captures the fact that default during an economic downturn is typically accompanied with lower recoveries. This third article explains our approach to estimating LGD in more detail. 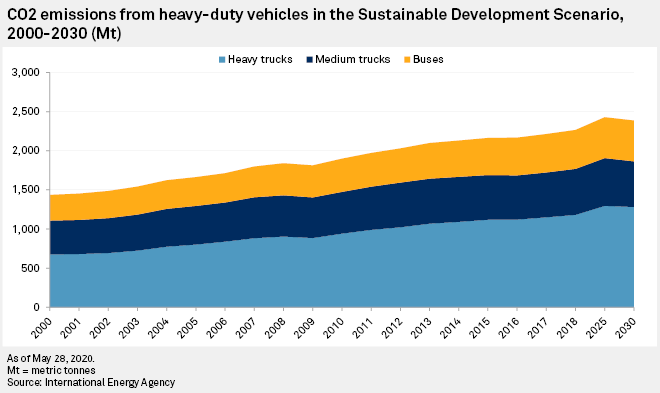 Zero-emissions technology is spreading beyond the passenger car market and into the world of commercial vehicles as regulators make tougher demands of manufacturers on pollution reduction and haulers eye potentially lower fuel and maintenance costs.

If governments and companies want to move more quickly toward net-zero emissions, progress on early stage technologies needs to be accelerated, the head of the energy technology policy division at the International Energy Agency said during a July 22 webcast. In a recent report, Timur Gul said, the IEA presented a "faster innovation case" on how net-zero emissions could be achieved globally in 2050, "by assuming that technologies currently only in the laboratory or at the stage of small prototypes today are quickly made available for commercial investment."

A recent federal court ruling against a Trump administration rule on oil and gas methane emissions may revive a long-paused fight over the regulation's Obama-era predecessor. The U.S. District Court for the Northern District of California recently vacated the 2018 U.S. Bureau of Land Management's rule limiting methane emissions from oil and gas operations on federal lands. That regulation had effectively rescinded much of a more restrictive Obama administration 2016 rule, the Methane and Waste Prevention Rule. The federal judge said that leaving the Trump administration's methane regulation in place would cause more environmental harm than removing it and opted to re-implement the Obama-era rule. The 2018 rule's removal and 2016 rule's reinstatement will become effective 90 days after the July 15 order.

Climate change means we may face more frequent or severe weather events, such as floods, droughts, and typhoons if action isn’t taken. These events bring physical risks that can have a negative impact on businesses and the overall economy. At the same time, steps taken to help alleviate climate change can result in transition risks, as carbon taxes and other policies add new operating costs. There is a complex interplay between physical and transition risks that can impact the operational stability, creditworthiness and financial performance of firms.

Sophie Byron, associate pricing director for agriculture in the Americas, and Ellie Valencia, senior pricing specialist for jet fuel, are joined by Chris Cooper, Neste's vice president for renewable aviation in North America, to discuss the future growth of the SAF market.

—Listen to Commodities Focus, a podcast from S&P Global Platts

Infographic: Inside the world of floating storage and the volatile tanker markets 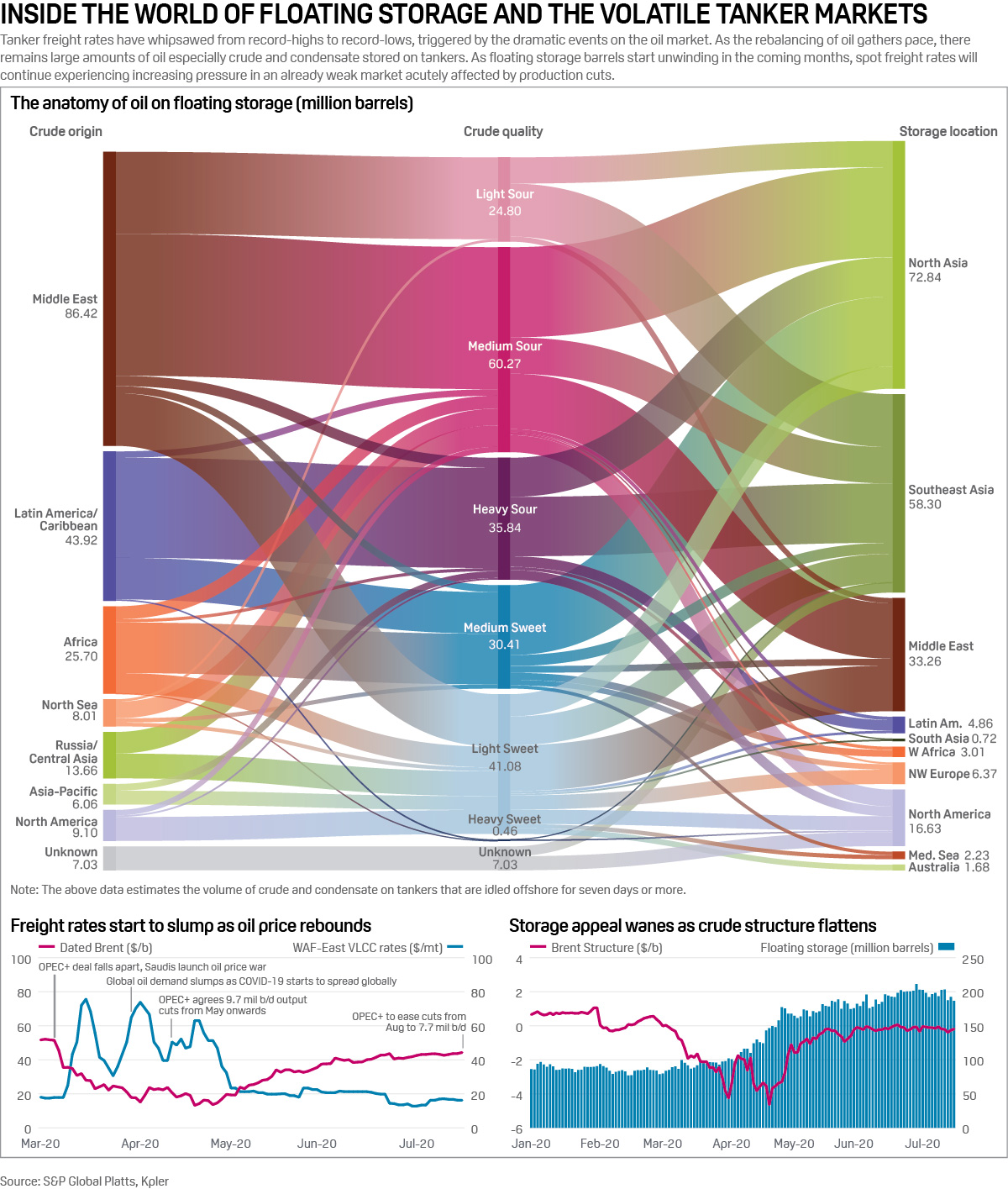 Tanker freight rates have whipsawed from record-highs to record-lows, triggered by the dramatic events on the oil market. As the rebalancing of oil gathers pace, there remains large amounts of oil especially crude and condensate stored on tankers.

All but one of the top publicly traded U.S. coal companies are expected to report second-quarter earnings results lower than both the previous quarter and the year-ago period while just two are expected to report positive earnings per share, according to an analysis of analyst estimates. Like most of the economy, coal miners have been heavily affected by the COVID-19 pandemic. However, the industry was already struggling with the structural decline of its domestic customer base and weakening export prospects long before the virus delivered a blow to coal demand.

Energy demand indicators in the world's biggest oil-consuming countries suggest the economic recovery from the COVID-19 pandemic is flatlining, and in some cases retreating, amid growing concern over an acceleration in global COVID-19 infections. With some notable exceptions, the recovery in global mobility indices from April lows largely came to a halt in early July, according to mobility data reported by Google showing activity in offices, retail sites, and transport hubs. Economic mobility in the US, the world's biggest oil consumer, was stagnant last week after dipping from post-lockdown highs on July 2, according to the data up to July 17. In Asia, mobility is falling in India and South Korea while the activity rebound in most of Europe's biggest economies may also have run out of steam, the data show.

—Watch and share the full video from S&P Global Platts