When Sovereigns Default: A Global and Regional Look


When Sovereigns Default: A Global and Regional Look

Part two of a three-part series

As discussed in the first article of this three-part series, Sovereigns assume that their debt will be rolled over by borrowing from others to repay balances that are due.[1] Economic uncertainties stemming from COVID-19 are challenging this operating model, however, and may make it more difficult for some countries to refinance their debt. It has become paramount to keep a close watch on sovereign credit risk given these conditions.

The Importance of Loss Given Default (LGD)

LGD is an estimate of the portion of an exposure (bond or loan equivalent) that will likely not be recovered in the event of default. If an investment has a high probability of default (PD) but a low LGD, the principal could still be recovered. Conversely, if it has a low PD but a high LGD, money could be lost. This makes it important to consider LGD. S&P Global Market Intelligence LGD Scorecards were constructed over 17 years ago with the aim of estimating LGD at the exposure level. The Sovereign LGD Scorecard produces estimates of LGD which are point-in-time (PIT), reflecting current economic conditions. This feature captures the fact that default during an economic downturn is typically accompanied with lower recoveries.

A Global Overview of LGD

Utilizing the Sovereign LGD Scorecard, we forecast LGD for 121 rated countries under various scenarios. As shown in Figure 1, the average LGD for all 121 sovereigns, as of May 27, 2020, was 46.3%. The global median LGD was marginally higher, at 50%. The expected LGD values varied widely, with a standard deviation of almost 27.4% for the global sample, which is very similar to the 22% experienced historically.[2] 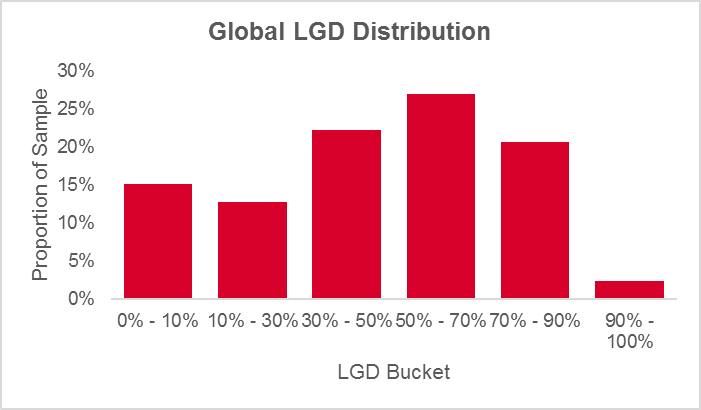 As shown in Figure 2, a broad pattern emerges with developed economies expecting lower losses, on average, than those of emerging markets. This is driven, in part, by more predictable economic and political frameworks in developed countries, along with stronger support networks (e.g., EU), relatively higher notional economic values, relatively more diversified economies, and a lack of historical defaults. Offsetting factors include higher amounts of debt and, in the case of Greece, poor historical recovery rates. 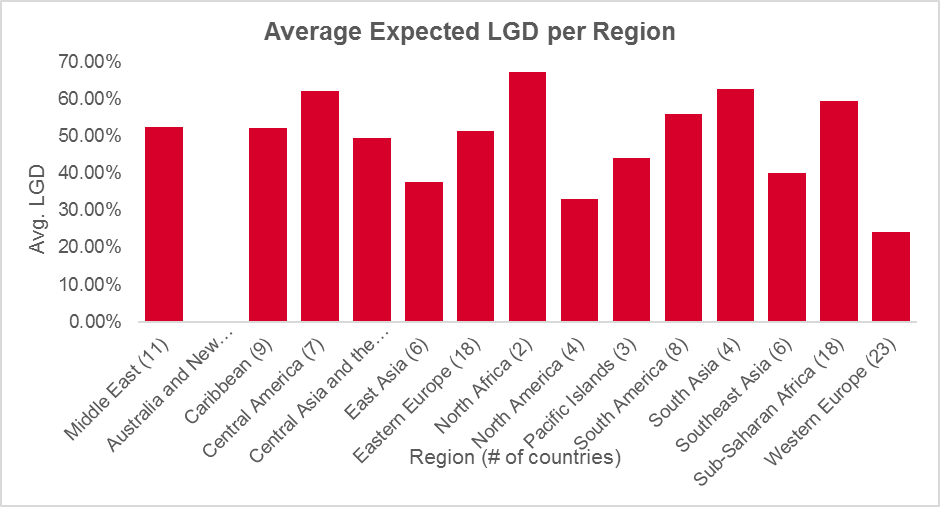 Western European (WE) and North American (NA) nations have the lowest average loss expectations at 24.03% and 33.10%, respectively. The WE group is composed of 23 countries with varying profiles reflected in a standard deviation of 26%. Figure 3 shows the proportion of LGD buckets for the entire sample. Approximately 43% of WE countries are expected to have minimal losses in the event of default (LGD bucket 0%-10%). The majority of these countries are located in Northern Europe and have exceptionally strong credit profiles, with many, such as Norway, being net creditors. 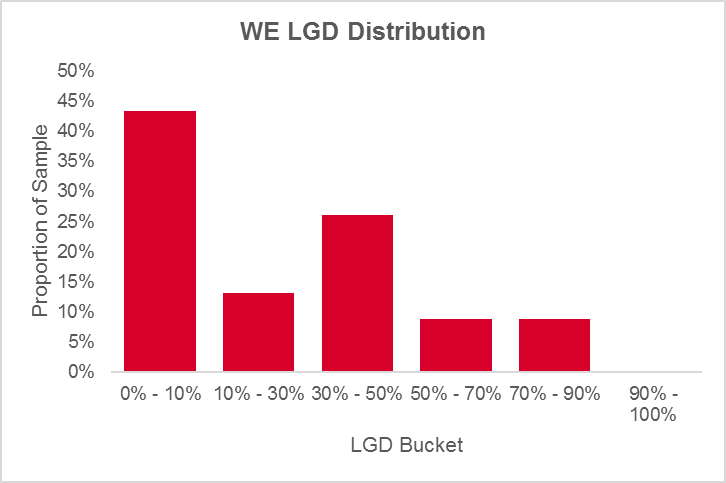 From the Eastern European group, Russia is expected to have an LGD in the 30%-50% range. While the country has low debt levels and an abundance of natural resources, this is superseded by the expectation of severe political and economic instability following any potential default, high sensitivity to oil/gas prices, lower levels of post-default support, and high losses during previous defaults.

In Sub-Saharan Africa (SSA), Botswana stands out with low expected losses in the 10%-30% range, driven by a relatively strong credit profile and low levels of debt. South Africa, is expected to have an LGD in the upper end of the 50%-70% bucket, caused by high debt levels (gross debt to GDP of above 80%) and economic growth well below most emerging market peers on a per capita basis. The distribution of LGD forecasts is distinctively bimodal, with both large and minimal losses expected, culminating in a high standard deviation of 32.5%. As shown in Figure 6, Kuwait, Ras Al Khaimah, and Abu Dhabi are expected to have an LGD between 0% and 30%, with the remaining countries expected to have LGD expectations in the 50%-90% range. 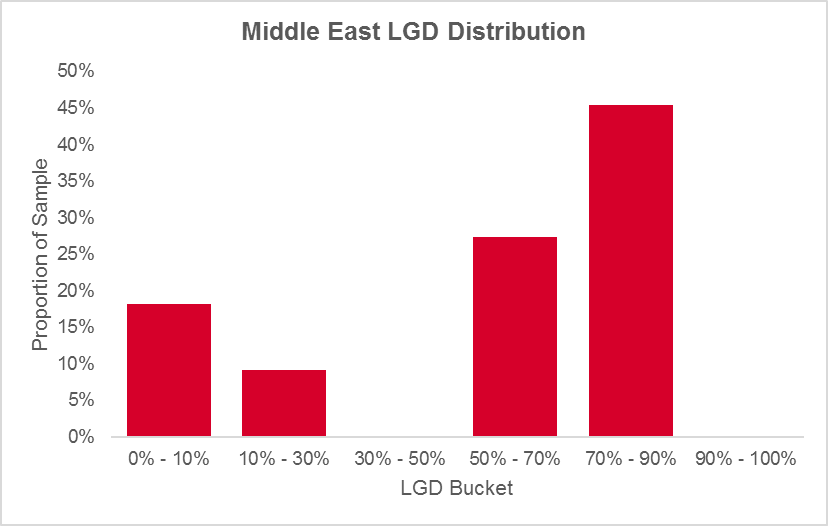 As for Argentina, Lebanon, and Ecuador that have recently defaulted, we expect Argentinian and Ecuadorian bonds to recover circa 22% (i.e., LGD in the 70%-90% bucket), with Ecuadorian creditors faring marginally better. The recovery for Lebanese bonds is expected to be marginally less, at circa 18.9% (70%-90% LGD bucket). All three estimates are proving to be reasonable given current information from market and official sources that show expected LGD in the 70%-90% bucket.[3], [4], [5], [6] Actual recoveries could potentially be lower once the impact of COVID-19 is known. Under more stressed scenarios, the LGD bucket forecast by the Sovereign LGD Scorecard would likely shift by one bucket to 90%-100%.