Infrastructure insufficiency may have driven some oil producers in New Mexico, Texas and North Dakota to flare significant volumes of associated gas and to under-report flaring activity to authorities to allow production of much higher-valued oil to continue.

U.S. flaring data has traditionally been collected from producers by state agencies, who then share it with the U.S. Energy Information Administration. The EIA in turn aggregates and publishes the information on an annual basis, but after a nine-month delay. EIA-compiled flaring data thus relies upon summary reports from states, which in turn rely upon self-reporting by producers.

Not only does the multitiered system invite errors and possible manipulation, but also the significant lag in the release of the aggregated data from the EIA precludes timely tracking and analysis efforts by independent entities.

A potentially more accurate and timely flaring assessment option is available through sophisticated satellite systems owned by the U.S. government. Entities, such as NASA and the National Oceanic and Atmospheric Administration, or NOAA, operate satellites that incorporate Earth surveillance systems that offer noninvasive, real-time data collection across the U.S. and around the globe. Remote, real-time information gathering is an invaluable resource compared to conventionally reported, ground-based data, which varies in quality, standardization and timeliness.

Natural gas flaring at the local, state, regional, national and global scale is a significant area of interest to many stakeholders, including regulators, lawmakers, environmental activists, energy analysts and the oil and gas industry. There are several motivations for growing interest. Some coincide with efforts to reduce hydrocarbon waste, lower emissions of greenhouse gases and decrease sources of pollution. In addition, investors, industry analysts and competitors, among others, seek alternative avenues to evaluate operational, financial and regulatory environments that are continually evolving.

Noninvasive and real-time sensing and assessment of flaring has several advantages over traditional collection methods; it does not encroach on property or other borders and mitigates the time delay between producers reporting to authorities and the subsequent release of the aggregated information by these bodies. Independent comprehensive assessment also mitigates the potential for accidental or intentional under-reporting as well as other inadvertent errors associated with traditional methods.

Investment, industry, regulatory, legal and environmental stakeholders may benefit from the ability to accurately assess hydrocarbon flaring around the globe. The implications around competition, regulation, pollution and greenhouse gases emission generate significant value to the practice. Access to conventional data sources for many aspects of oil and gas operations is delayed because of varied reporting schedules and because many sources of data are considered proprietary and are simply not made available. On the other hand, remote collection and assessment of flaring data provides a viable addition to the traditional information contained in sources such as well permits and reported production data.

NOAA began to monitor global flaring by satellite a few years ago. The organization applies sophisticated processing systems to observe and analyze flaring signals. The data generated from observations of shortwave and near-infrared emissions at night is collected, processed and archived through a system known as the Visible Infrared Imaging Radiometer Suite.

NOAA researchers have constructed a data processing algorithm that determines the quantity of gas combusted during flaring from point sources; data identified as non-flaring-related, such as forest fires and city lights, is disregarded. The results of the formula have been assessed by NOAA as accurate to within plus or minus 9.5% of the actual flared gas volume. S&P Global Market Intelligence, in preparation of its analysis, retrieved several years of global flaring information from NOAA and performed its own spatial aggregation upon a selection of the data. The analysis incorporated the NOAA-calculated values of flared gas volumes for distinct combustion sources in Texas, New Mexico and North Dakota and aggregated them to arrive at a composite annual flared volume for each state. 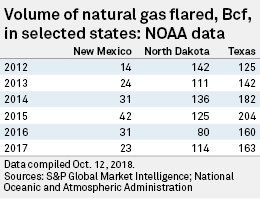 The data amassed for Texas from NOAA satellite scans has translated to 163 Bcf of gas flared in 2017, or about 2.6% of the state’s natural gas production; this level was virtually unchanged compared to the 2016 observation of 160 Bcf or 2.5% of production. However, 2016 and 2017 flaring levels were improved compared to 2015, when 204 Bcf or 2.9% of production was burned. Despite the progress, the levels of combustion appear to amount to roughly two times the levels producers self-reported to the state, who ultimately submits the data to the EIA. 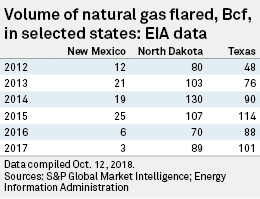 Whether the pattern of lower flaring indicated by the NOAA data, calculated as a fraction of total production from EIA information, repeats in 2018 is a central question. Considering the accelerated pace of production activity in the Permian for much of 2018 and the continued constrained takeaway capacity from the region as gas supplies burgeon, an upward creep in gross flaring level would be expected. 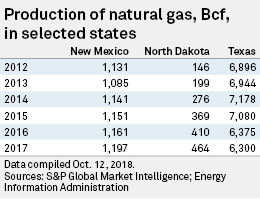 Texas legislation is designed to prevent resource waste, but some producers may under-report flaring

Texas generally classifies the flaring of natural gas, outside of allowed exemptions for safety and short-term well-completion procedures, as a waste of resources. The flaring of natural gas for the purpose of disposal, such as when insufficient transport infrastructure is available, is not directly permitted under Texas statutes. However, the Railroad Commission of Texas, the body tasked with regulating the oil and gas industry, has the authority to issue administrative exceptions to allow long-term flaring of natural gas. Oil-targeted wells in the Permian contain an abundance of associated gas. The under-capacity of long-haul gas transportation out of the basin is not expected to be eased until several large gas transport projects are completed over the next several years.

Whether the commission would allow widespread flaring of excess gas while transportation networks are built has been debated by many industry observers. The statewide rule 32, formally known as Texas Administrative Code, Title 16, Part 1, Chapter 3, Section 3.32, specifically bans the flaring of any volume of gas that may be metered unless it is for a specific exempted short-term purpose. Measurable volumes of gas are expected to be used for lease operations or sold for the benefit of the owners and the state treasury.

NOAA calculations of flared gas volumes, though incrementally higher than those reported by the EIA, follow the same general trends within the states examined by S&P Global Market Intelligence. The NOAA-derived flaring estimates are likely more representative of actual field combustion levels as they are generated through a unified observation system with signals normalized globally, whereas EIA estimates result from the aggregation of hundreds to thousands of reports submitted by producers to state agencies, who in turn submit a summary compilation to the EIA.

The multiplicity of measurements and filings appear likely to introduce a higher potential for errors, the possibility of under-reporting — either accidental or intentional — and the propagation of inconsistencies in normalization considering the breadth of producers, volume of source records and tiers of processing.

The NOAA algorithm incorporates multiple parameters including the intensity of flaring within specific heat and wavelength ranges, allowing non-flaring-related noise to be excluded from calculations. The NOAA combustion estimates, as aggregated by S&P Global Market Intelligence, exhibit a level of flaring in Texas roughly two-fold higher compared to EIA data over the same time frame.

According to figures derived from NOAA flaring data, the average annual volume of gas flared in Texas over the years 2012 through 2017 was 163 Bcf. In contrast, EIA flaring data indicates an average of 86 Bcf burned each year over the same period. Either perspective indicates a non-trivial level of gas flaring, with 977 Bcf combusted over six years by NOAA data or 516 Bcf according to data from EIA reports.

New Mexico flaring appears understated in 2016 and 2017, with irregularity in reported production

The discrepancy between NOAA and EIA flaring data was rather more striking when activity in New Mexico was scrutinized. Gas flaring activity in 2012 and 2013 in the state, as measured by NOAA and aggregated by S&P, was roughly 15% higher in both years compared with the levels published by the EIA; S&P calculated figures of 14 Bcf and 24 Bcf in 2012 and 2013, respectively, from the NOAA data, compared with 12.3 Bcf and 21.1 Bcf as reported by EIA. 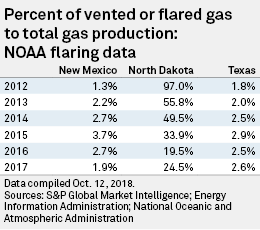 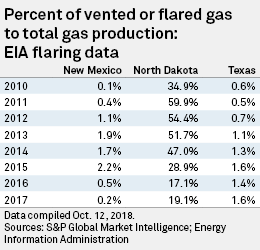 A possible explanation for the widening gap between the two flaring assessment systems regarding the New Mexico examples could be the inability of gas infrastructure construction to keep pace with the explosion in drilling, completion and production in the portion of Permian Basin located in the southeastern corner of the state. The situation may have resulted in higher gas volumes than could be dealt with, and producers may have under-reported flared volumes as they struggled to keep the increasing oil production moving to market.

Paradoxically, but in line with the posits above, New Mexico crude oil production grew in 2017 by 17.1% to 171 million barrels from 146 million barrels in 2016, according to EIA data, while natural gas production reported to the EIA increased by only 3.1% to 1,197 Bcf in 2017 from 1,161 Bcf in 2016. The disparity in growth is a conundrum considering that the majority of new oil production in New Mexico in 2017 resulted from unconventional shale oil, primarily from the Permian, which is laden with associated gas.

North Dakota flaring activity, as measured by NOAA and compared with data collected and reported by the EIA, shows closer agreement between the two data sets, compared with observations in Texas and New Mexico. Over the years 2012 through 2017, NOAA-derived flaring activity has averaged 25% higher than that reported by the EIA. During the years 2013 through 2015, the NOAA and EIA flaring levels were only about 10% apart. However, in 2017, NOAA data indicated flaring of 114 Bcf for the year, a level nearly 30% higher than the 88.5 Bcf reported by the EIA.

North Dakota regulators have struggled with unauthorized flaring by producers and have sought methods to track down violators. North Dakota plans to require producers who exceed allowed flaring levels of 15% of production to shut their wells until gas infrastructure construction has caught up with demand.

North Dakota regulators have sought tools to track down producers who exceed allowed flaring levels in an effort to conserve natural gas that could be used for other purposes, and NOAA flaring data could be the key to their efforts. The remote sensing capabilities of the NASA/NOAA satellites include capturing the latitude and longitude coordinates of flares.

Considering the detailed location information required for issuance of oil and gas drilling permits, cross-referencing the geographic information captured by the Oil and Gas Division, Department of Mineral Resources, North Dakota Industrial Commission with that contained in the NOAA flaring database would likely allow flagging those sites that exceed flaring thresholds for follow-up.