How Tax Reform Will Grow Our Economy and Create Jobs: a Testimony to the U.S. House of Representatives

Move over Millennials: ESG Investing Is a Multigenerational Conversation


How Tax Reform Will Grow Our Economy and Create Jobs: a Testimony to the U.S. House of Representatives

The following is a testimony given by Douglas L. Peterson, President and CEO of S&P Global, at the Committee on Ways and Means, the chief tax-writing committee of the United States House of Representatives, on Thursday, May 18, 2017.


Chairman Brady and Ranking Member Neal, thank you for inviting me to speak today. And thank you to the entire Committee for your efforts to modernize the U.S. tax code.

I am grateful for the opportunity to share my perspective on how tax reform is essential for U.S. companies to better compete in the global marketplace.

S&P Global is the Worldwide Provider of Essential Intelligence

S&P Global is a leading provider of ratings, benchmarks, analytics and data to the capital and commodities markets worldwide.

S&P Global’s insights and commitment to transparency, integrity, and superior analytics have been at the forefront of U.S. economic growth since the company’s founding over 150 years ago. Beginning with the expansion of our nation’s railroad system, to the rise of the world’s most liquid and resilient capital markets, to the growth of digital information and technology, S&P Global’s essential intelligence has remained independent and has guided important decisions throughout U.S. history.

Two of our flagship products, the S&P 500® and the Dow Jones Industrial Average®, are widely accepted as the leading measures of U.S. equity market performance. Our research, products, and insights offer American investors, their families, coworkers, and friends the critical information needed to make informed financial decisions.

In addition to employing thousands of Americans across our great country, we work extensively with businesses of all sizes to help them invest and grow, as well as state and local governments, to help facilitate investment in schools, roads, bridges, and other public works. There is bipartisan agreement about the challenges facing our country’s aging infrastructure, and we hope to continue to bring our data, in-depth analytics, and unique ideas to the table to work with Congress to address those issues.

Currently, the U.S. has the highest statutory corporate tax rate among the 35 countries in the OECD. Importantly, other countries are attempting to lure our businesses—and their tax revenues—abroad. A recent Congressional Budget Office (CBO) analysis demonstrates not only the high statutory corporate rate in the U.S., but also the changes that have been made to tax rates in other G20 countries while the U.S. has stayed static. This study, which encompasses the 2003-2012 timeframe, shows how almost every country around the world has been incentivizing corporate investment through lower taxes. For example, during this timeframe, Canada dropped from 36 to 26% and China from 33 to 25%. The United Kingdom will have a 17% corporate tax rate by 2020. 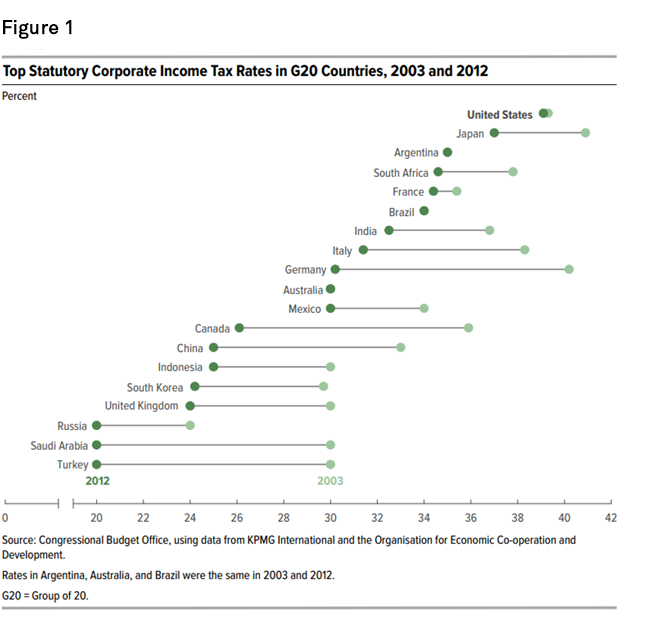 According to our research, the other countries where our competitors domicile their business and intellectual property have significantly lower corporate tax rates compared to the U.S., as seen in the chart below.

S&P Global is a U.S.-headquartered company, but, like so many others, we compete at the international level. While we have grown significantly since our beginnings, we have maintained ownership of most of our intellectual property in the U.S. We therefore have a much higher effective tax rate than our international competitors do. In fact, throughout our history, we have consistently paid an effective rate of over 30%, while many of our competitors pay in the low teens. As an example, we paid an effective tax rate of 30.1% in 2016 and $683 million in taxes. Because our greatest asset is our people, not machines or real estate, we are unable to avail ourselves of deductions and write-offs in a tax code that was written for a different time and a very different economy. 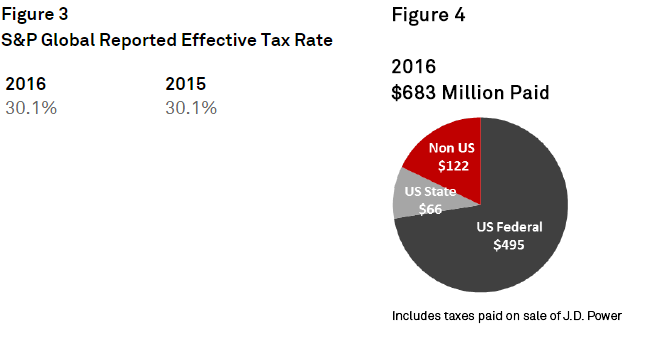 In 2016, even though 60% of our revenues were domestic, our U.S. tax base was 70% of our income because of our U.S.-based intellectual property. Over the last five years, S&P Global has paid $1.8 billion in taxes in the U.S.

At this unique moment in time, our country has the opportunity to put aside political differences and enact tax reform that not only brings the tax code into the 21st Century, but also ensures that America remains the best place in the world to do business.

It is Time to Level the Playing Field

The U.S. federal tax code was last updated over 30 years ago, in 1986. Its structure, however, is rooted in the post-World War II era. We have a markedly different economy today. For example, who could have foreseen the ubiquitous nature of technology in the way we conduct business today? Intellectual property is more important than ever to our global economy. And the pace of technological change is only accelerating.

Note: Figures may not add to 100% due to rounding 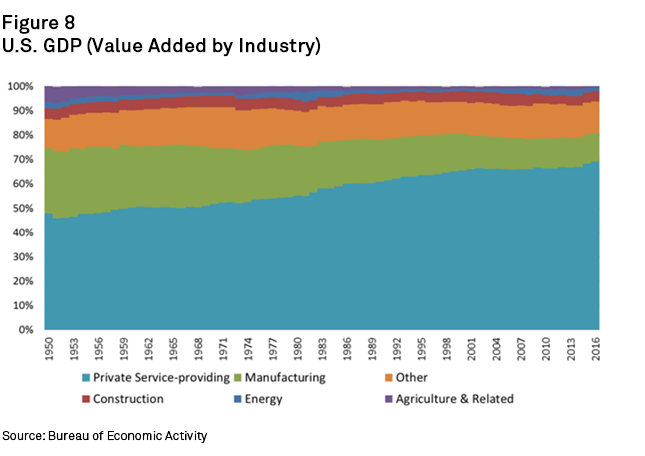 Note: Figures may not add to 100% due to rounding 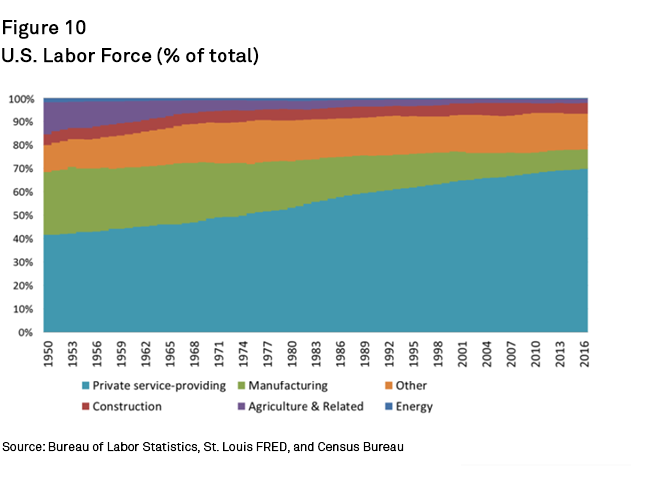 We must make adjustments that reflect the growth and development of our dynamic economy in order to keep up with the quickly evolving competitive global market. Three primary elements are critical to help ensure that U.S. companies can better compete in the global marketplace. These include:

A lower corporate income tax rate must be part of any tax reform plan. Our country’s high statutory rate hinders the ability of U.S. companies to successfully compete on the global stage. A lower tax rate would not only help curb the exit of U.S. companies from our great country but would also create a powerful incentive for others to move here.

A tax reform effort must also result in a level playing field for American companies. Currently, foreign companies established in a country with a territorial tax system that sell goods in the U.S. pay little-to-no corporate tax when the profits return to the home country. In contrast, U.S. businesses that sell goods and services to foreign customers are taxed when their profits are returned to be reinvested in the U.S. This discourages reinvestment of profits generated abroad into the United States, a dynamic that simply doesn’t exist for the international competitors of U.S. companies.

This unfair playing field is tilted further against U.S. companies by border-adjusted taxes such as Value Added Taxes (VAT) that have been enacted in more than 130 countries around the world. Foreign companies can sell goods and services from a VAT country into the U.S. without paying VAT in the source country and without any border-adjusted tax upon import to the U.S. In contrast, goods and services produced in the U.S. and sold into a VAT country bear a tax upon importation at rates that can reach 20%.

This does not benefit American businesses, the communities in which they operate, their employees, or their families.

Since the tax code was last reformed, the American economy has changed dramatically in terms of the products it makes, the markets it sells into, and the skills it requires. The emergence of technology, the growth of intellectual property, and the globalization of markets are all new features of our economy.

The tax code, though, has not evolved with the economy. The result is a highly unfair system that undermines competitiveness. The tax inequities that now exist between companies, and the inequities that advantage foreign competitors over their American counterparts can be traced to an antiquated code.

It’s time for a fresh start to American tax policy—one that levels the playing field for all American firms—and ensures that no firm (“old” economy or “new” economy, manufacturing or service) is disadvantaged when competing.

Restoring Growth and Competitiveness to the U.S. Economy

In a recent survey by the Business Roundtable, 71% of CEOs who responded identified tax reform as the best way to accelerate U.S. economic growth. This overwhelming response demonstrates the potential and the importance of reforming our tax code. 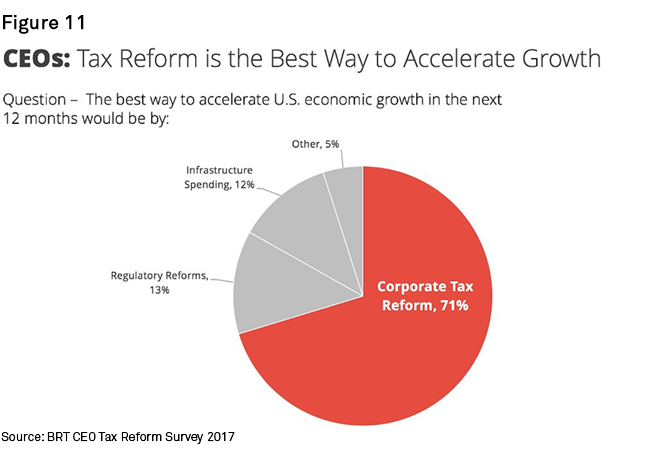 The U.S. remains a “tax outlier.” Our tax system is antiquated, unfair, and hinders our ability to compete on a global scale. It is time for a change. The current system is stifling our economic growth. We are losing ground at a time when we should be leading. It is incumbent on us to seize this moment and enact substantial changes that will eliminate concerns for businesses about growing, investing and innovating in the U.S.

I hope this Congress will seize this moment.

Thank you for the opportunity to provide this statement at such an important time. I welcome any questions you might have.