The coronavirus pandemic has caused the most challenging market environment for fixed income credit investors since the Global Financial Crisis. The increase in volatility has further accelerated the trend towards intensified use of tradable index products to manage credit. Here we shine a light on credit index product usage through the lens of trading volumes, specifically for index products linked to IHS Markit indices, including ETFs, total return swaps, futures, and credit default swap indices.

The unexpected COVID-19 pandemic roiled bond markets and caused illiquidity in bond pricing. As such, corporate bond ETFs became a tool to gauge pricing and provided continuous liquidity for accessing the market. In March, central banks announced stimulus programs (SMCCF in the US and PEPP in Europe) aimed to support financial markets. Central banks' efforts paid off, causing credit markets to regain lost ground in the second quarter, while also further increasing activity in fixed income ETFs, including those linked to iBoxx indices.

The iShares iBoxx $ Investment Grade Corporate Bond ETF (LQD), linked to the iBoxx USD Liquid Investment Grade Index, reached an all-time high of $54 billion of assets under management (AUM) in H1. A 53% growth driven by $3.8 billion of capital gains and $15.5 billion of inflows. Net inflows were 4.1x the inflows during the same time period last year. 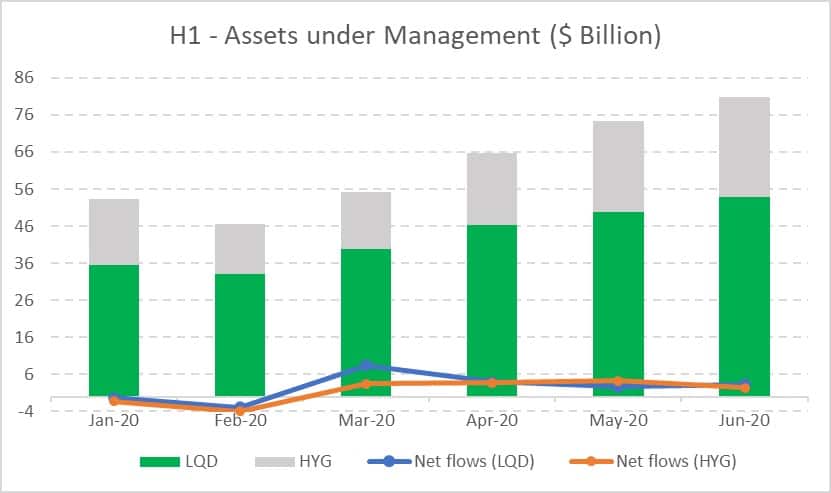 Most of the inflows shown above occurred in March on the heels of the Fed announcement, with LQD and HYG adding $8.5 billion and 3.4 billion in the month, respectively. Investors moved into corporate bond ETFs, injecting billions in anticipation of the Fed stimulus program. From May 12th through June 26th, the Fed purchased a total of $8 billion in fixed income ETFs, including $2.3bn of LQD and $275 million of HYG.

In support of the corporate bond market, the ECB pulled out its own crisis-fighting bazooka in the form of the EUR 750 million Pandemic Emergency Purchase Program (PEPP). Further, during their June policy meeting the ECB further raised the size of the program by EUR 600 billion, reaching total potential support of EUR 1,350 billion. At the same time, the ECB is currently excluding high yield bonds from their purchase program.

The iShares Euro Corporate Bond Large Cap UCITS ETF (IBCX), tracking the performance of the Markit iBoxx EUR Liquid Corporates Large Cap Index, ended the first half with the addition of $0.7 billion of assets (vs. +$0.4bn in H1 2019) to reach $4.5 billion in AUM, which is 18% greater than at the start of the year. 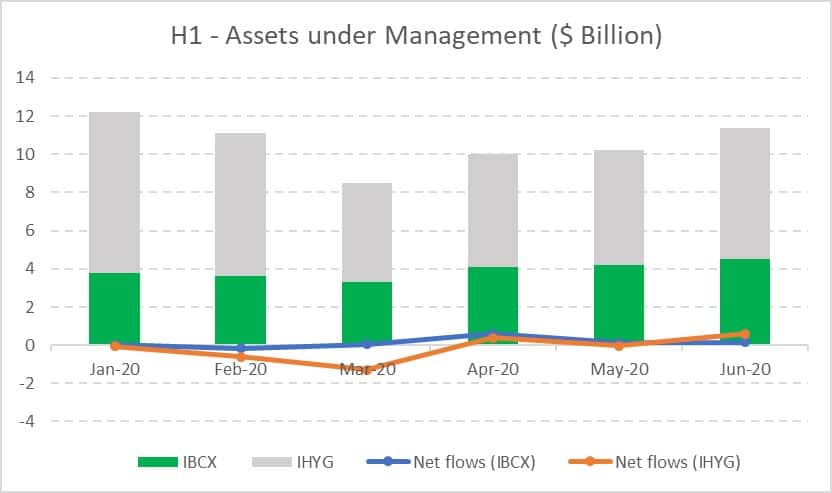 The Cboe iBoxx iShares $ High Yield Corporate Bond Index Futures (IBHY), the first-of-its-kind futures to track the performance of USD HY bonds, notched record volumes of $5.4 billion during the second quarter of the year. $3 billion of IBHY traded in May alone, which was by far the biggest month on record. YTD volume in IBHY is up to $ 7.6 billion, which is more than 5.8x the volumes during the same period last year. It's worth noting that IBHY volumes hit a single day volume record of $395 million on May 14th, 2020. 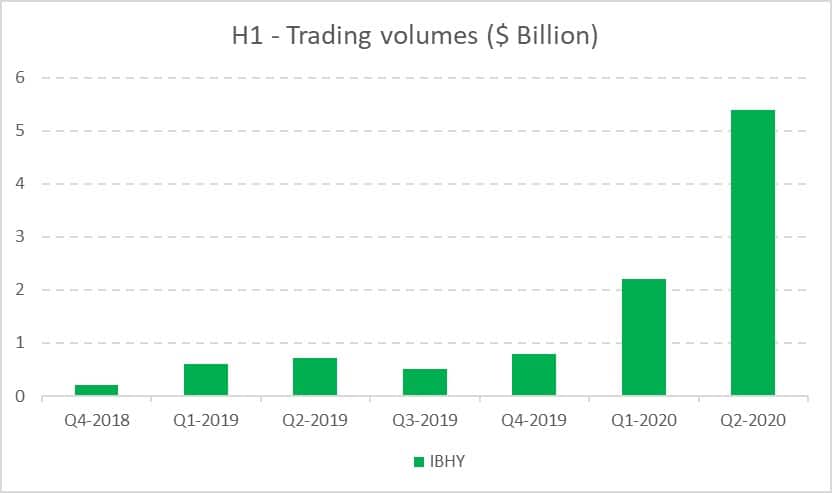 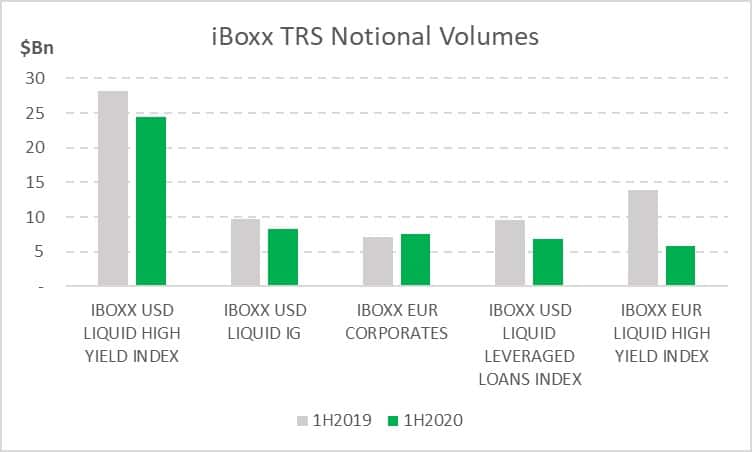 Total untranched CDS index volumes across all CDX and iTraxx Europe indices were $10.6 trillion in the first half of 2020, which was 53.74% higher than the same point last year. 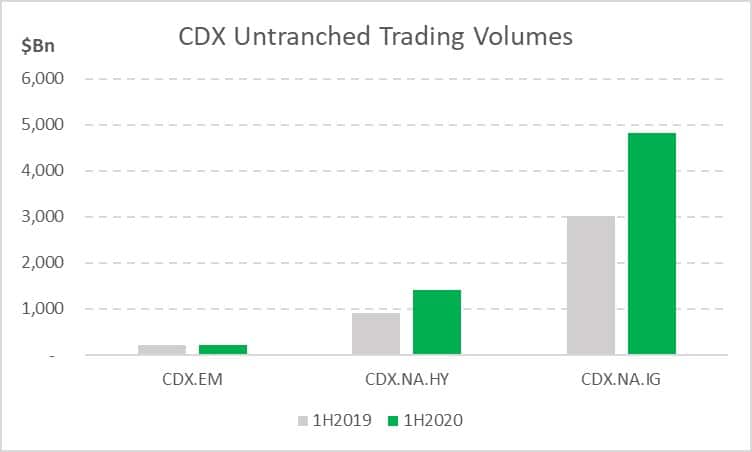 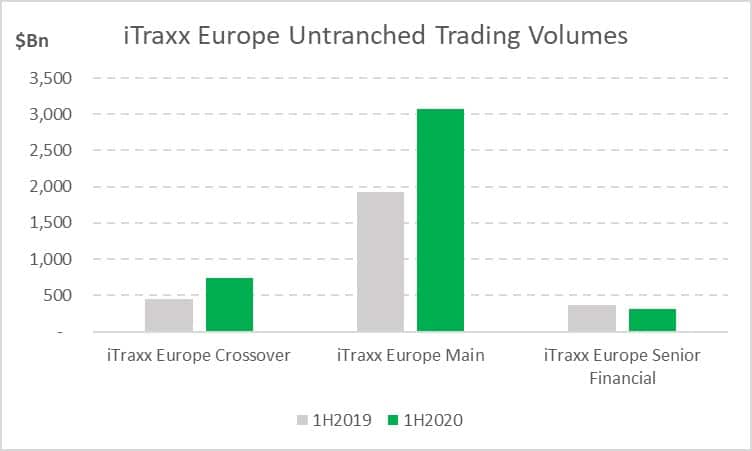 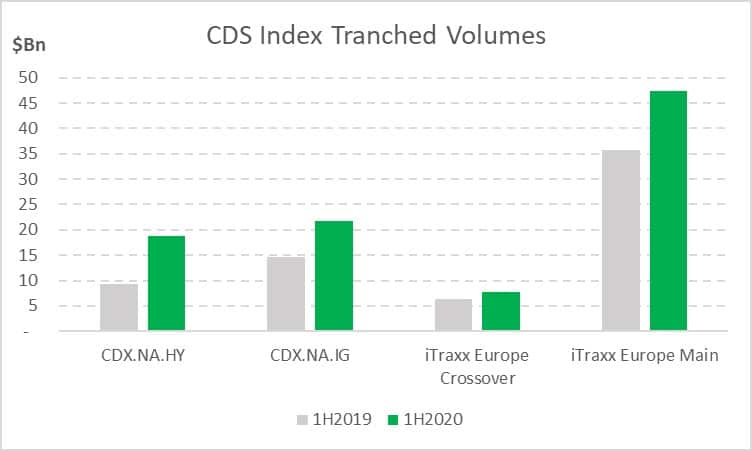 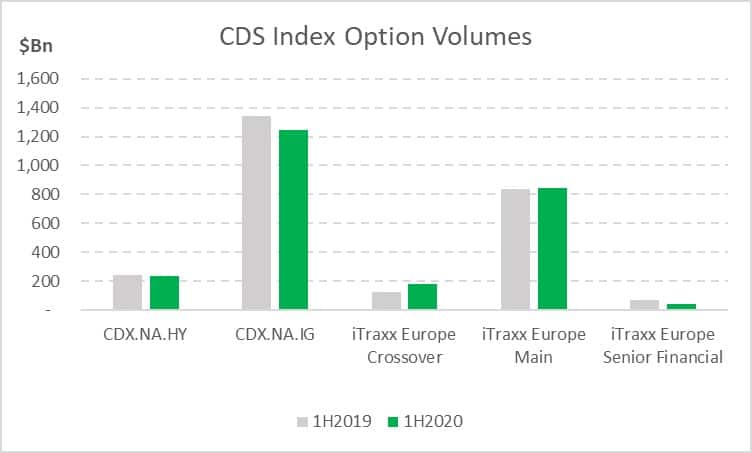 The use of tradable credit indices continues to expand, driven by increased adoption by various market participants. Volumes across products prove to be accretive, with increased liquidity observed across credit ETFs, CDX and iTraxx and corporate bond futures, while TRS on iBoxx indices continue to display meaningful activity. As shown above, these instruments have proved to be the most liquid instruments available to credit investors, and as such offer pricing transparency and low costs of trading that benefit investors.