2019 was a remarkable year for risky assets. All benchmarks tracked in the SPIVA U.S. Year-End 2019 Scorecard delivered positive returns. Information Technology-heavy and more internationally diversified companies of the S&P 500® pushed the index to its second- and fourth-highest annual return since 2001 and 1990, respectively. In addition, the S&P MidCap 400® (26.2%) and S&P SmallCap 600® (22.8%) also delivered strong returns.

While these tailwinds helped U.S. equity managers, they still didn’t translate into active outperforming passive. Our latest SPIVA U.S. Scorecard shows that 70% of domestic equity funds lagged the S&P Composite 1500® over the one-year period ending Dec. 31, 2019. This is the fourth-worst performance since 2001. 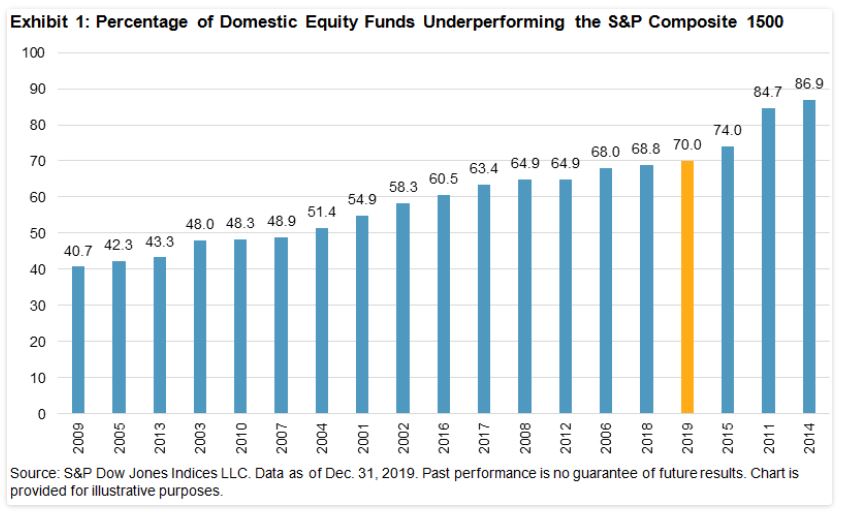 However, one reason for the reasonably good performance of mid-/small-cap funds in 2019 could be performance divergence. In 2019, the S&P 500 outperformed the S&P MidCap 400 and S&P SmallCap 600. Arguably, mid-/small-cap managers could have outperformed their respective asset classes by shifting just a bit to larger caps; however, this strategy did not work in the long term because the three benchmarks showed much less divergence in the past 10 years.

As they say, the proof of the pudding is in the eating. If active managers cannot deliver outperformance over the long term, they should consider not remaining active!