As green investing becomes ever more mainstream, there is greater scrutiny of the myriad “environmentally friendly” investment products that have emerged. Several green-labeled benchmarks have been criticized for including oil and gas stocks, for instance, sparking some controversy within the sustainable investment community. However, while efforts to make financial products more transparent are laudable, not all arguments favoring divestment depict a complete and accurate picture. More often than not, divestment is more principled than practical when it comes to achieving the low-carbon transition.

As an independent index provider, S&P Dow Jones Indices has the responsibility of being transparent with its methodologies and marketing. Educating stakeholders, including investors, policymakers, and the media, is key to bridging expectations with the financial jargon that often plagues lengthy methodology documents. This is especially relevant in climate finance, for which the threat of “greenwashing” looms large. But divesting from fossil fuels is just one approach—and not all “green” products necessarily ought to do so. Indeed, the climate-conscious investor has two options.

The divestment movement does not argue that divesting will necessarily decrease a company’s value—it is primarily an expression of values for the principled investor. Engagement, on the other hand, is a tool for effecting a particular change. That said, more than 1,000 institutional investors with USD 11 trillion in assets are divesting from fossil fuels,[1] with some citing motives such as the avoidance of stranded-asset risk. Many banks and insurers have also committed to neither finance nor underwrite fossil fuel projects, inevitably slowing the industry’s expansion. However, divestment will not likely move a company’s stock price so long as there continue to be many investors who do not share the same moral virtues.[2] Ultimately, both approaches are valid, depending on the objectives of the individual investor.

This dichotomy is well understood in the active space, given shareholder advocacy, but there are parallels with passive investing too. If engagement is any strategy that influences company behavior, then benchmarks can also be an effective tool for engagement. Take the S&P Carbon Efficient Index Series, for instance (see Exhibit 1). 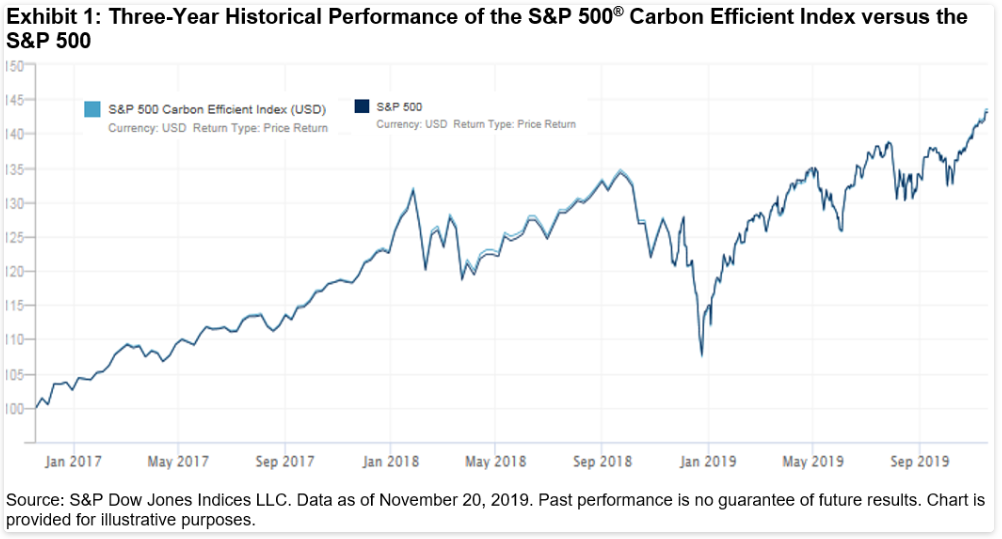 By excluding any of the world’s 100 biggest carbon emitters who don’t disclose, and retaining reweighted exposure to all other companies—including fossil fuel stocks—the S&P Carbon Efficient Index Series reduces the carbon footprint by as much as 20%-45%, while uniquely encouraging:

Our novel methodology sorts companies into deciles by carbon intensity within GICS® industry groups and reweights them accordingly. However, since some industries are inherently more greenhouse gas-emitting than others, we consider the spread of industry group emissions and adjust weights by a greater or lesser extent, depending on how much a company can feasibly improve given available technologies (see Exhibit 2).[3] Companies are thereby incentivized to disclose and decarbonize to boost their overall standing. So although fossil fuel-free strategies tick certain boxes, they typically achieve less in terms of decarbonizing prowess.

Thus, so long as a methodology is transparent with its aims, it may make sense to include fossil fuel stocks in green indices. Naysayers may want to look closer at whether a strategy intends to divest or engage, because while both are green, only one is actually “greening.” 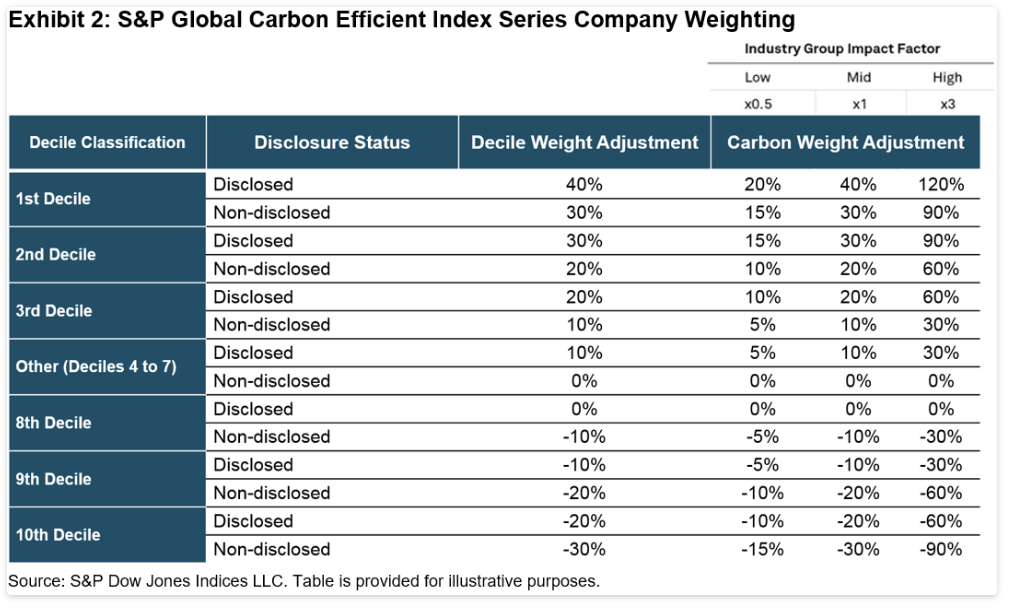 [2]   See https://www.newyorker.com/business/currency/does-divestment-work for an explanation for why divestment requires a critical mass of adopters to have any real impact on stock prices.