Pure hydrogen (H2) is increasingly seen as a tool for decarbonization in a wide range of industries. But in order to break into the mainstream, the fuel will need reliable methods to transport it.

While current demand for H2 is limited primarily to oil refining and chemical production – mainly ammonia and methanol – there is growing consensus that H2 could serve as a key decarbonization approach in an array of commercial, power generation, transport and industrial applications.

Reliable, sustainable, and cost-effective transportation of H2 to where it is needed is a prerequisite to the competitiveness and uptake of H2, as centralized production is likely to dominate supply in the near to medium term.

Go deeper: Request a copy of Pumping Protons: The Landscape of Transporting Hydrogen 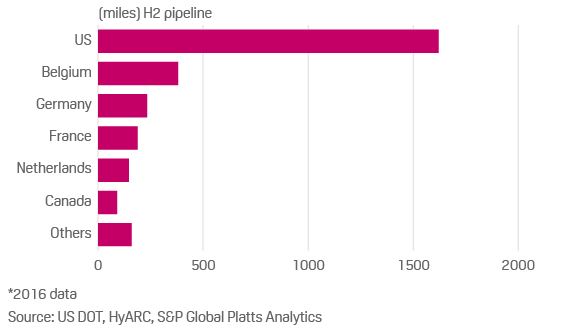 Due to their high capital cost and long lifetime, H2 pipelines are typically reserved for high volume flows with stable and long-term demand of 15-30 years. This use case is most typical in the chemical and refining industry, sectors which own and operate the bulk of current installed pipeline capacity. At low flow volumes, pipelines are typically not cost effective.

Blending H2 into existing natural gas pipeline networks would allow for pipeline H2 transportation without new dedicated pipes. Blended H2 can either be removed at city gate pressure step-down facilities, or left as a constituent of the natural gas.

While leaving H2 blended in the natural gas stream can reduce costs, it can also cause challenges for end-use infrastructure such as natural gas burners and turbines. To address this, some jurisdictions have defined H2 blend limits in natural gas pipeline system. 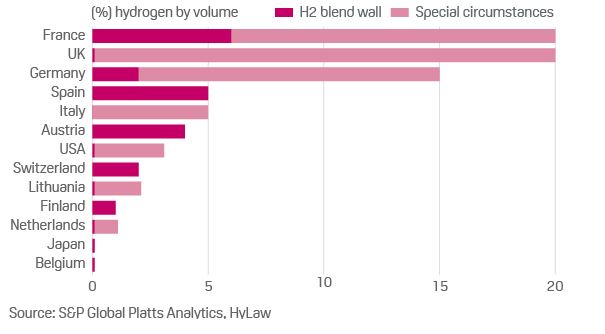 Platts Analytics estimates that a global 5% blending of zero carbon H2 into the gas grid could abate up to 340 MT CO2 per year – equal to the total annual GHG emissions of a country like Spain.

Tube trucks are commonly employed for transporting H2 to sites with low and intermittent demand such as light-duty vehicle H2 refueling stations. Compressor loads are a primary cost contributor to GH2 transportation.

Liquefaction is an energy-intensive, multistage process with costs exacerbated by H2 having the lowest boiling point of any element, requiring temperatures below -253oC to enter into the liquid phase, compared with around -160oC for LNG.

Liquefied hydrogen (LH2) is stored in large, insulated containers at terminals before loading onto insulated trucks. In its liquid state, a single truck can haul up to 3,500 kg of LH2, over three times the haul-per-load of a GH2 tube truck.

This requires significant investment in a liquefaction terminal, highly-insulated storage tanks and truck trailers, and regasification terminals at destination. At the same time, it saves money on high pressure storage and operational transportation costs.

Due to the high capital investment required to set up a liquefaction plant, LH2 delivery is typically saved for medium- to high-demand volumes consistent enough to validate the investment, but below volumes that justify a pipeline. Many supply chains feeding H2 refueling stations in California are utilizing liquefaction to increase volumes.

Similar to LNG, H2 could be liquefied at port terminals before being loaded onto highly-insulated tanker ships. Based on assumptions about volumes of current LNG tankers and LH2 density, dedicated LH2 ships would likely have a carrying capacity of between 12,750-18,400 tonnes H2/ship.

Boil-off of product is a key concern, even when utilizing bunkers with active cooling measures. On an eleven-day journey (typical of a bunker trip from Australia to Japan), an LH2 ship could experience losses of 2% of cargo, though a portion could be utilized for ship propulsion (similar to LNG bunkers).

H2 need not be produced internationally to be sourced from international energy sources. To avoid the headache of transporting H2 on dedicated marine bunkers, market participants could leverage LNG’s vibrant and lower-cost international trade network to import LNG as a feedstock for the production of H2 in-country. While this pathway is likely much lower cost, it requires domestic access to both domestic LNG regasification facilities, hydrogen production facilities with carbon capture, and geologic storage for captured CO2.

Next-generation H2 transportation pathways increasingly look to simplify transportation by chemically incorporating H2 into larger molecules that exist as liquids at or near ambient temperature and pressure.

LHCs are much denser than GH2, allowing for greater mass of H2 per unit volume without the liquefaction and insulation challenges of LH2. LHCs also change the chemical properties of H2, alleviating some transportation concerns, though often in exchange for toxicity concerns.

Several LHCs are under consideration, including ammonia and methanol. Conversion of H2 to ammonia requires 7%-18% of the energy within the hydrogen. While use of LHCs has multiple theoretical benefits, the practice has yet to gain traction due primarily to conversion costs.

Up to now, H2 pipelines and liquefied trucking have proved to be low cost and reliable modes to service current H2 demand. Ambition to diversify both production and demand into novel low-carbon pathways will require a rethinking of the H2 supply networks we rely on today.