Sustainability-focused groups are calling on the CEOs of major U.S. corporations who make up the Business Roundtable to act on their recent declaration that the companies should concentrate on providing benefits to all stakeholders rather than primarily on deriving profits for shareholders.

About 180 of the roundtable's member CEOs signed a letter in August expressing the view that the focus should be on overall benefits to customers, employees, suppliers and communities along with shareholders. The letter marked a major shift in the group's official position.

Shareholder advocacy groups such as Ceres and the Interfaith Center on Corporate Responsibility, or ICCR, have responded to those pledges with newspaper editorials and letters to the roundtable asking the CEOs to support the existing shareholder resolution process and tackle issues such as climate change, water quality challenges and deforestation separately.

The most important aspect of the roundtable statement will be whether those companies follow up with deeds and hold themselves accountable, Ceres President Mindy Lubber said in a Sept. 3 interview. "So a year from now, look at where companies have acted to bring in a broader group of stakeholders to influence what [the companies do], where their priorities are, and so on," said Lubber, who made a similar argument in an editorial published in Forbes in late August.

"Words are good, but now put your muscle behind it," she said in the interview.

The ICCR, a coalition of more than 300 institutional investors collectively representing over US$500 billion in invested capital, in a recent letter to the roundtable blasted the group for having supported changes to the shareholder resolution process currently being considered by the U.S. Securities and Exchange Commission. 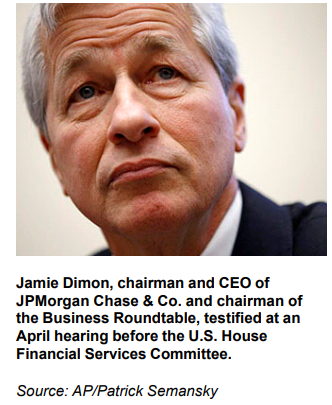 The SEC oversees the rules underlying the proxy process in which companies hold annual meetings with investors each spring. At those meetings, investors vote on key governance issues and, at times, on resolutions shareholders have submitted, such as on climate change.

Shareholder advocates view the proxy process as a key tool for pushing companies to pay attention to emerging issues, and some are concerned that the process would be hindered if the SEC revamps the rules. The roundtable has advocated for the agency to raise the minimum threshold of money and time a shareholder must have invested in a corporation before proposing a resolution. The roundtable also wants the SEC to increase the minimum shareholder support a resolution must have received in a prior meeting to be eligible to be re-introduced.

The roundtable in June filed comments with the SEC indicating that its member CEOs are very interested in direct engagement with shareholders and believe the proposed reforms to the resolution process will not hinder that ability. However, the current rules "enable many proponents to submit proposals that are not relevant to shareholders at large, simultaneously at a host of companies," the roundtable wrote. "These activities divert management's and the board's attention away from creating longterm value for the company."

The ICCR in its recent letter urged the roundtable to rethink that position, asserting that it is inconsistent with the group's new stated purpose for corporations. The arguments the roundtable made to the SEC present "a false generalization that describes shareholder resolutions as presenting irrelevant issues that waste a company and investors’ time," the letter said.

However, a roundtable spokeswoman in a Sept. 4 emailed statement effectively reiterated the comments the group submitted to the SEC — an indication that the group has not changed its position.

The roundtable's new purpose statement prompted public responses from others as well. For example, Steve Hanke, a professor of applied economics at The Johns Hopkins University, in an editorial published in the USA Today on Aug. 28 criticized the group's new position.

"What they've done is completely nonsensical because if shareholder value is the objective of the firm, which it should be … you should be working for the shareholders," Hanke said in a Sept. 3 interview. "If you do that, you will simultaneously be working for everyone" else in the supply chain, as well as your customers, local communities and employees.

"They should have pushed back against these demands of those who are carrying the stakeholder banner and say looking after the shareholders who actually own our companies is, in fact, looking after all these groups that are listed," Hanke added.

The non-profit group B Lab, which certifies for-profit companies as meeting certain social, environmental, accountability and transparency standards, put out a full-page advertisement in the New York Times on Aug. 25 challenging the roundtable CEOs to get "B Corp" certification.

Since the ad appeared, a handful of companies, including some whose CEOs are part of the roundtable, have reached out to B Lab inquiring about certification options, Andrew Kassoy, co-founder and managing partner of B Lab, said in a Sept. 3 interview.

For its part, the roundtable in an Aug. 25 blog post said some common priorities among its members related to working with employees and other stakeholders, including encouraging Congress to raise the federal minimum wage and building effective training and education programs. Roundtable members also support the concept of a longer-term view of their earnings beyond quarterly results, the blog post said.