The U.S.’s relationships with the EU and Japan may soon be strengthened with steel.

Following months of discussions originating in March between the world’s largest economy and its European allies, American and E.U. officials announced on Oct. 30 a deal to partially replace the Section 232 tariffs of 25% on European steel and 10% on aluminum implemented by the Trump Administration in 2018 with a tariff-rate quota system that will allow select volumes of European steel to be sent into the U.S. without duties. In addition to resolving the bitter three-year-long dispute and suspending the EU’s retaliatory tariffs on U.S. goods, the deal also aims to promote green steel and aluminum production.

Although the decision faced mixed reactions from U.S. and EU market participants, the thawing of U.S.-E.U. trade tensions has inspired other economies to take similar action.

Approximately one month after Japan asked the U.S. to dissolve the Section 232 tariffs that the Trump Administration implemented against the country’s steel, the U.S. on Nov. 12 said it would initiate talks to potentially ease the duties. Yesterday, Japan's Industry Minister Koichi Hagiuda and U.S. Commerce Secretary Gina Raimondo agreed to start discussions.

“Moving forward, other countries may be able to ride the momentum of the U.S.-EU arrangement, including Japan,” Eric Oak, a researcher at Panjiva, part of S&P Global Market Intelligence, said in a recent analysis.

Today is Tuesday, November 16, 2021, and here is today’s essential intelligence. 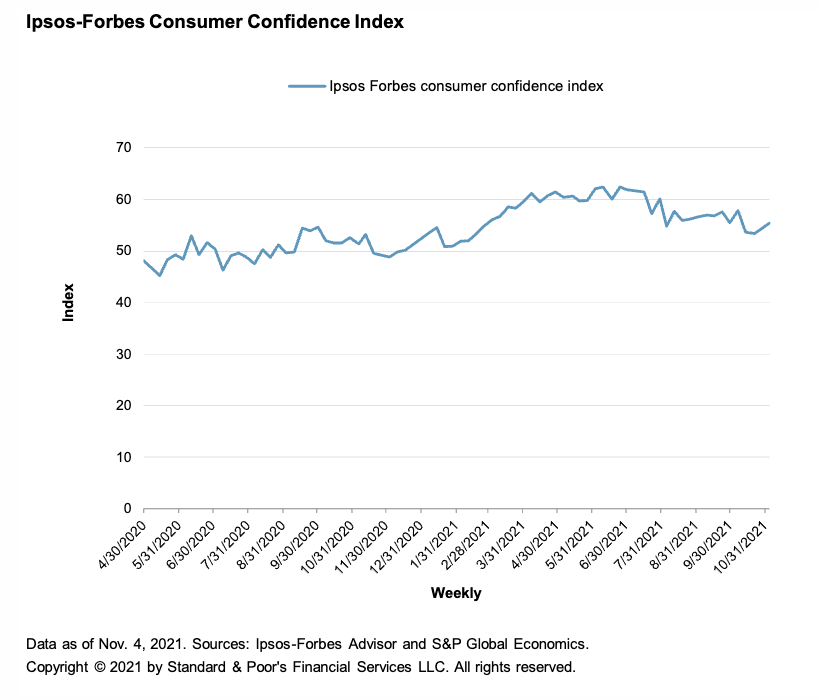 Consumer prices have surged to a 30-year high on an annual basis as inflation expectations climb higher, hurting consumer confidence. While sequential consumer price index (CPI) inflation has moderated, and supply-side bottlenecks are starting to show signs of easing, these factors complicate the Fed's efforts to convince markets that the latest price increases are largely transitory.

U.S. imports by volume increased 2.7% year over year in October based on preliminary data collected by Panjiva, continuing to indicate that logistics networks are running flat out. U.S. import networks are at capacity, as noted in Panjiva's Q4'21 Outlook, bringing with it much of the congestion and supply chain issues faced by companies this year.

Default, Transition, and Recovery: Distressed Debt Amount Falls By Over 70% 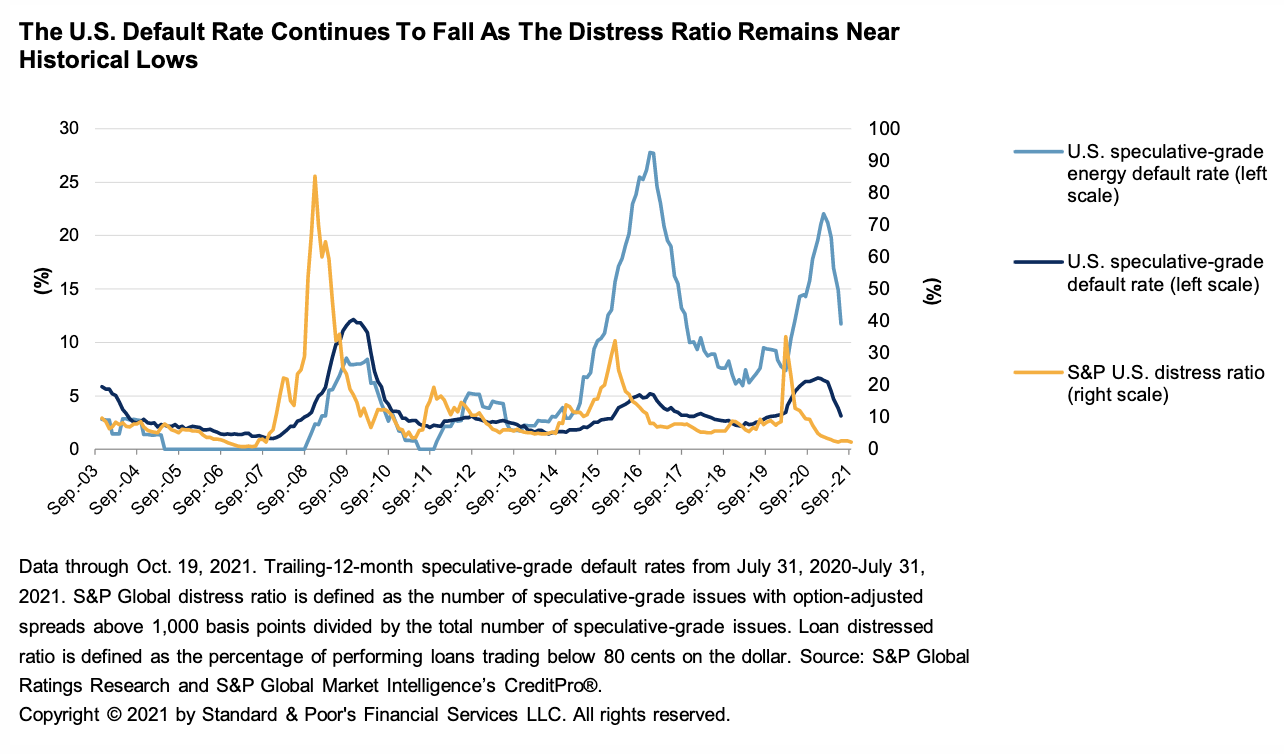 The U.S. distress ratio fell to 2.3%—tied with its lowest level since 2007—from 2.6%. The amount of distressed debt has decreased by over 70% since October 2020, with the oil and gas sector the largest contributor to this decline.

China securitization maintains its pace, with new issuance growing 5% YOY to RMB783 billion (US$121 billion) in 3Q 2021. Auto loan ABS issuance was robust while RMBS issuance growth slowed down. Asset performance across classes was generally stable. Green development remains a key theme, supporting the flow of green auto loan ABS to the market during the quarter. 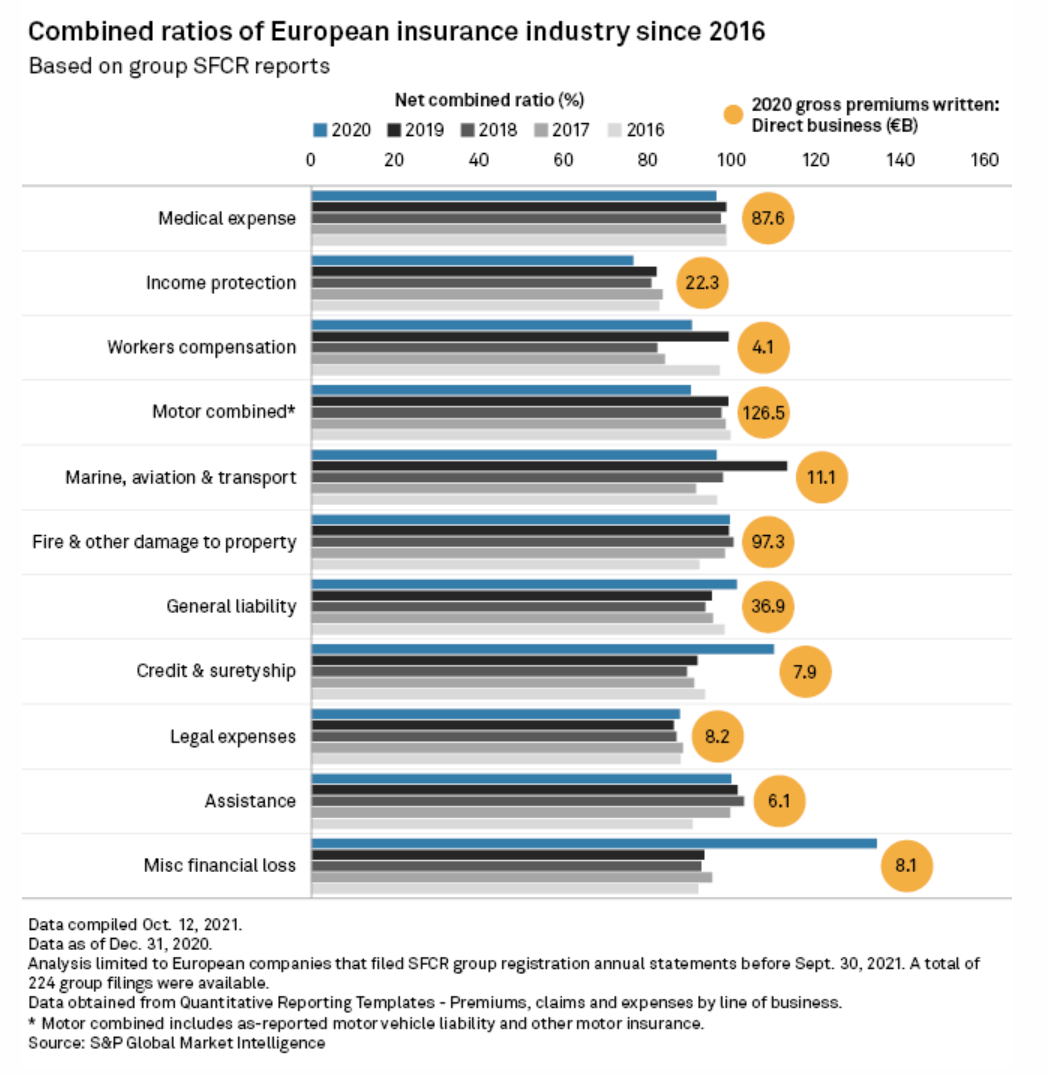 Europe's non-life insurers are likely to be pressured in 2022 after posting better-than-expected performances during the height of the COVID-19 pandemic. Despite facing an economic slowdown and pandemic-related claims, European insurers' 2020 underwriting results beat those seen in 2019. 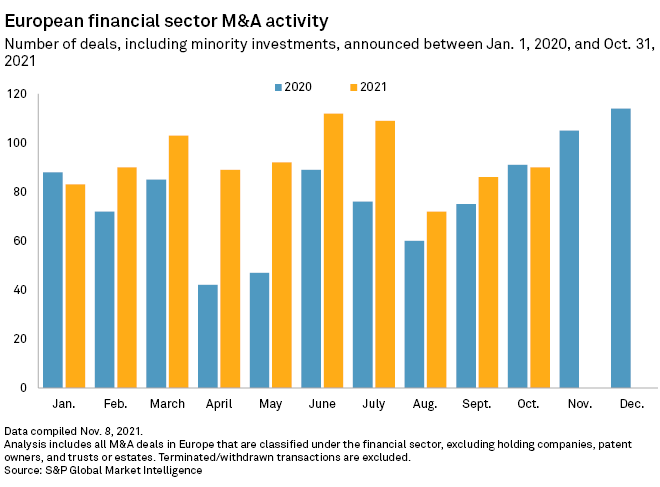 European M&A activity in the financial services sector edged downward in October, the first year-over-year decline since January, according to data from S&P Global Market Intelligence. There were 89 deals announced in October, compared to 91 a year ago. The 2.25% decline follows a 10.7% year-over-year rise in deal-making activity in September.

Japanese Megabanks Up Profit, Dividend Forecasts While Cautious On Economy

Japanese megabanks raised their full-year estimates on earnings and dividends after a strong fiscal first half while maintaining a cautious outlook on economic recovery. Mitsubishi UFJ Financial Group Inc. now expects record net profit of ￥1.05 trillion for the fiscal year ending March 2022, up 23.5% from its previous estimate. 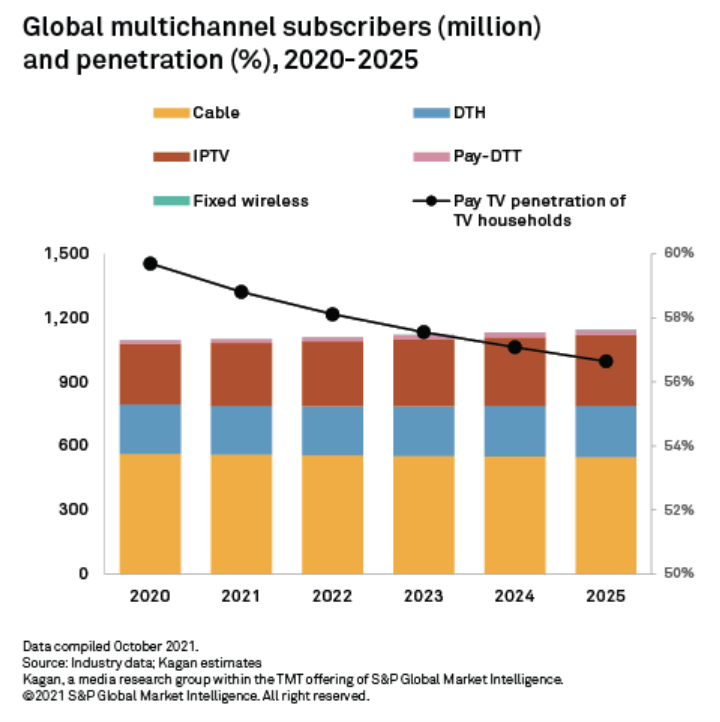 As fiber adoption accelerates globally and consumers increasingly turn to alternative forms of entertainment online, multichannel operators, particularly telcos, are beginning to reconsider their video strategies. Multichannel households have continued to grow globally in 2021 and are expected to reach a total of 1.10 billion by year-end for a weak 0.5% year-over-year increase.

FCC Considers French Satellite Constellation For The Internet Of Things

A French satellite operator is looking to enter the U.S. market to help connect the internet of things. The Federal Communications Commission in its Nov. 18 open commission meeting will consider a request from France's Kinéis to access U.S. frequencies and provide services through a constellation of 25 small, low-Earth orbit satellites, known as LEOs. 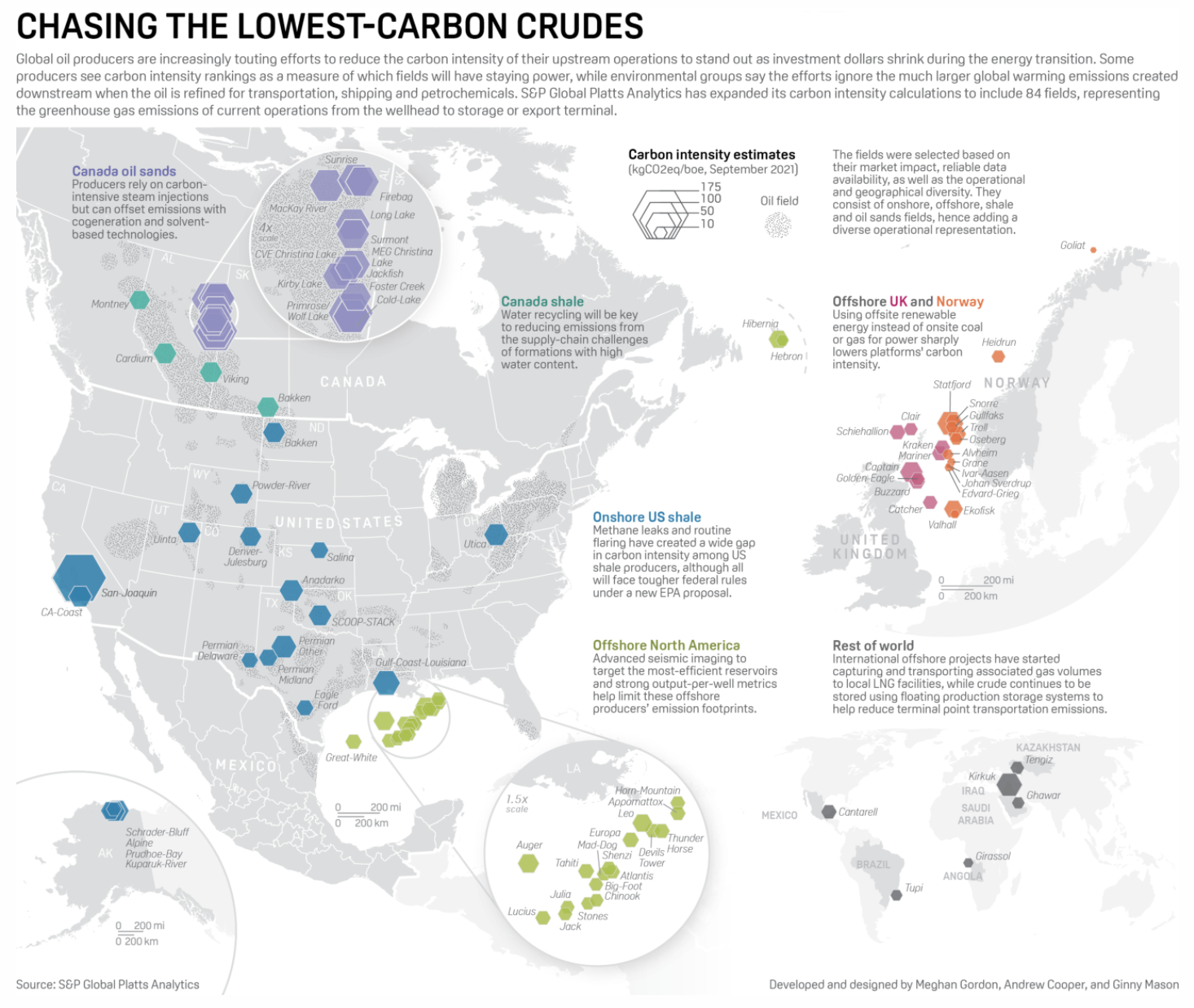 Even the most ambitious energy transition scenarios show the need for oil for years to come. Many oil and gas producers are scrutinizing the emissions impact of their portfolios in a bid to determine which fields will have staying power as fossil fuel investment shrinks.

Under pressure to avoid catastrophic climate change, nearly 200 nations agreed for the first time to phase down unabated coal-fired power plants and most fossil fuel subsidies while pledging to submit more ambitious emission reduction targets just a year from now.

Representatives struck a final deal on Article 6 of the 2015 Paris Agreement at the UN Climate Change Conference Nov. 13 as part of the Glasgow Climate Pact, in a move that is likely to unlock billions of dollars of investment in carbon reduction projects around the world. 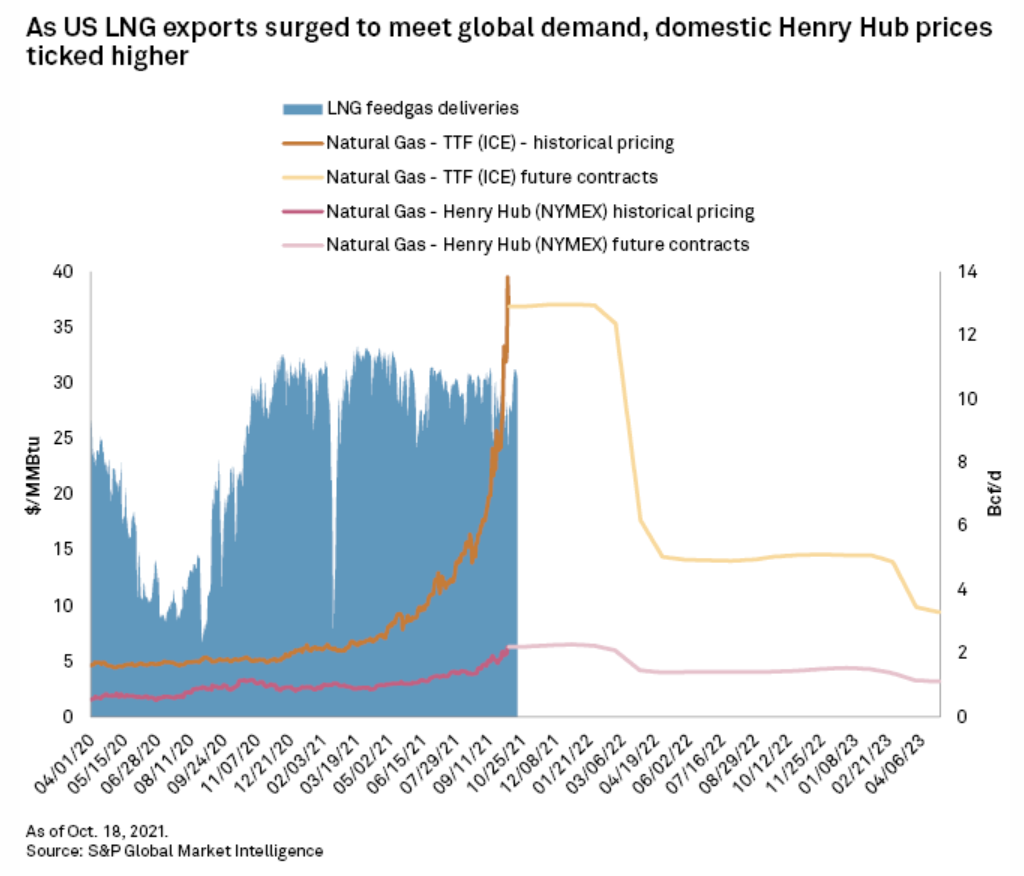 U.S. LNG export facilities continue to run at full throttle as a tight global market sends domestic natural gas prices to their highest level in years. World buyers are desperate to find available LNG cargoes, sending prices skyrocketing during a global energy crisis triggered by a combination of factors, including a gas shortage as global demand rebounds from the pandemic.

Shell said Nov. 15 it plans to scrap its long-standing dual share system and move its tax residence to the U.K. to simplify its structure, boost competitiveness, and accelerate shareholder distributions. Shell said it will propose to shareholders moving to single class of shares to bring it in line with its competitors and most other global companies.

Argentina is facing a period of economic and political volatility after the Nov. 14 midterm legislative elections that could cap growth in natural gas production as companies take refuge in crude oil until conditions improve, including for projects to increase much-needed gas transport capacity, executives and an analyst said.

A possible return to $100/b oil is likely to be short-lived given the "suffering" of industries due to high energy prices and potential for upstream producers to step up spending, Claudio Descalzi, CEO of Italy's Eni, said Nov. 15.

The president of Belarus, Alexander Lukashenko, on Nov. 15 vowed a "tough response" to an EU move to broaden its sanctions against Minsk over the current migrant crisis, having already hinted last week he could block Russian gas supplies to Europe.