Last week’s Wall Street tumble—the worst for U.S. equities markets since March 2020—is raising questions about whether a market correction is on the horizon.

After investors in the time of coronavirus have enjoyed the longest bull market in history,  a bearish mood has taken over. Propelled by a potential tightening of monetary policy from the Federal Reserve and a frenzy of mixed earnings reports from major companies, the FTSE All-World index covering 49 developed and emerging markets dropped 4.2%, the index stalwart Dow Jones Industrial Average declined 4.6%, or 1646.44 points, the benchmark S&P 500 index declined 5.7%, and the technology-heavy Nasdaq Composite declined 7.6%, in the week. Netflix’s stock took one of biggest tumbles, with shares plummeting 22% on Jan. 21 after the streaming platform warned in its fourth-quarter 2021 earnings release that subscriber growth would slow significantly. Investors had balked even before the company released its earnings. In the five trading days ending Jan. 13, Netflix lost 6.2% of its market capital after the company announced it would be raising its subscription prices in the U.S. and Canada, according to S&P Global Market Intelligence.

“The S&P 500 doubled down on its January blues, posting a third consecutive week of declines as it fell 6%—the worst week since the COVID-19 sell-off of March 2020. Every S&P 500 sector and factor ended the week lower, with High Beta’s slump of 9% making it the worst-performing,” Sherifa Issifu, an index investment strategy associate at S&P Dow Jones Indices, said in a market note this morning. “Putting last week’s declines into context, the S&P 500 is now sitting at a drawdown of 8%, its worst pullback from an all-time high since Sep. 2020. The U.S. bellwether is now teetering on the tip of a correction. Driven by concerns that inflation is not only transitory, but may be spiraling, coupled with expectations of weak earnings growth from 'big tech’, a firm majority (10/14) of the S&P 500’s daily returns so far this year have been declines.”

“For another perspective, there may not have been a technical correction yet, but there are certainly signs of a technical downtrend. Only a few days after falling below its 100-day moving average, the S&P 500 broke through its 200 DMA on Friday,” Ms. Issifu said in today’s note. “It’s not all bad news: Energy stocks have continued to provide a bright spot from the ‘doom and gloom;’ the only S&P 500 sector or factor in positive territory for 2022 is now 20% ahead of its parent MTD. Amongst factors, early leader Enhanced Value was pulled into the red MTD after declining 2% on Friday.”

The CBOE Volatility Index—colloquially considered Wall Street’s fear gauge—jumped from 26 to 29 on Jan. 21 and was trading at 30 this morning. The VIX started 2022 at 17. In contrast to equities’ rough start to 2022, commodities have continued their bull run into this year. The S&P GSCI had swelled 9% as of Jan. 20, and 21 of its 24 constituents have shown a positive return, according to S&P Dow Jones Indices. Separately, S&P Global Market Intelligence research found that the public remains more active in the market than prior to the pandemic, as retail traders have remained engaged following last year’s meme stock mania and seem likely to now trade on broader themes.

“Although it may feel otherwise, VIX levels year-to-date are well within the typical trading range,” Benedek Vörös, director of index investment strategy at S&P Dow Jones Indices, said in a note on Friday morning.

“History has demonstrated that although volatility may rise rapidly, it often declines slowly. In other words, the market tends to remain volatile for a while after a shock occurs,” S&P Dow Jones Indices said in research published in May 2020, when the VIX level was also 30. “A VIX level of 30 implies annualized volatility of 30%, or daily moves of 1.9% in the market during the next 30 days. Given that the S&P 500 has moved about 0.76% daily on average since 1990, the current VIX level implies that investors collectively anticipate outsized daily moves, at least in the short term.”

The strong sell-off could also signal investors’ shift from riskier assets to value stocks ahead of the forthcoming interest rate hikes. Ahead of Friday’s sell-off, short bets against U.S. equities were declining, which S&P Global Market Intelligence noted as a sign that market bears may have been in retreat. Now, investors will be watching more than 100 companies in the S&P 500 report earnings this week, alongside the Fed’s plans to tame inflation after its meeting this Tuesday and Wednesday.

S&P Global Ratings expects the Fed to end its net asset purchases by March 2022 and raise interest rates by 25 basis points three times this year starting in May, followed by balance sheet normalization starting as early as next year.

"Did going through the pandemic set up another long-term upcycle?” Norm Alpert, founding partner and co-president of U.S. midmarket investor Vestar Capital Partners, said in a recent interview with S&P Global Market Intelligence on private equity managers’ expectations for another boom year in 2022. “Or are we going to be in for a challenging period sort of just dealing with the aftermath because it wasn’t a finite event?"


Today is Monday, January 24, 2022, and here is today’s essential intelligence. 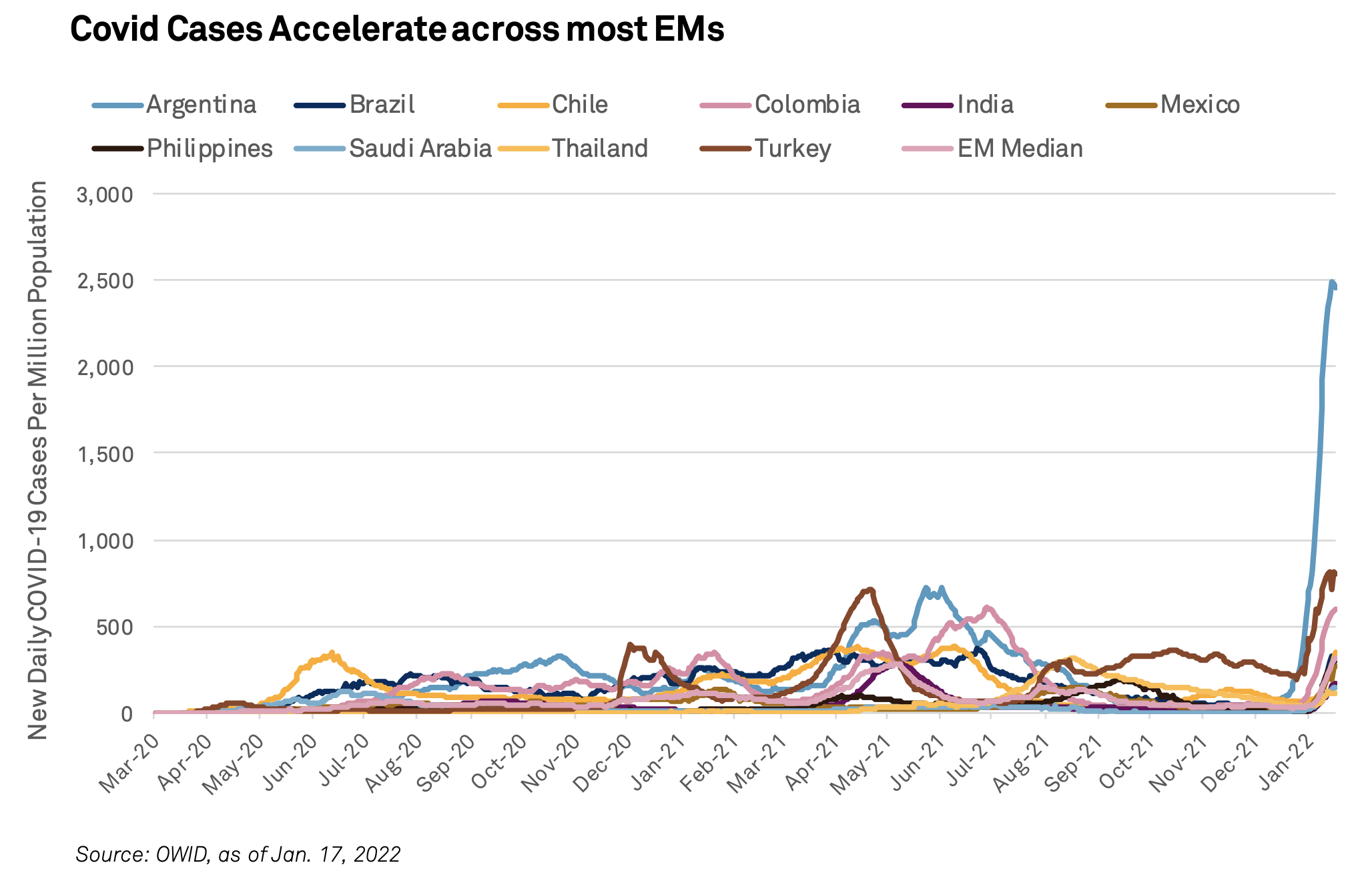 New COVID-19 cases are rising in emerging markets (EMs) due to the omicron strain. Currently, hospitalization rates in EMs seem to be moderate, but countries with low vaccination rates are still at risk. The new virus wave puts a strain on services and travel sectors, due to temporary lockdowns and widely imposed restrictions for international travel; however, the overall impact of this wave is uncertain.

Seasonal uptick in demand during spring season, post China's Lunar New Year holidays, indicates a positive outlook for Asia's hot-rolled coil, rebar, and ferrous scrap markets, which were characterized by subdued and sluggish trade during October-December 2021. The market trend for Asian hot-rolled coil is expected to shift in the first quarter of 2022 as sentiment among Chinese market participants is likely to turn positive after the Lunar New Year celebrations with an improvement in demand and steel output restrictions. 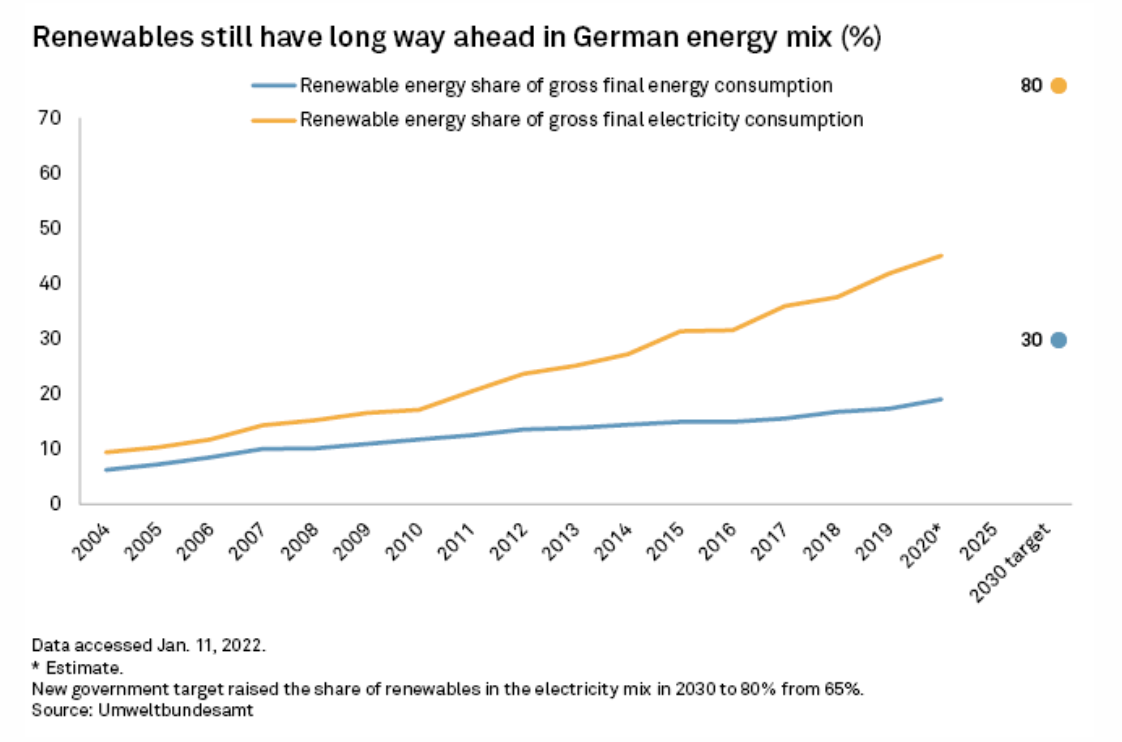 German onshore wind construction picked up pace in 2021 with 1.9 GW of fresh capacity installed, up 35% on the year. This brings the total onshore wind fleet to 56.1 GW, made up of over 28,000 turbines, a study commissioned by the country's wind association, BWE, found. Of the total capacity additions in 2021, 244 MW were repowerings, which are new wind farms built on the site of decommissioned ones. The report, written by Deutsche WindGuard, also recorded 233 MW of wind capacity being dismantled in 2021.

A DISH/DIRECTV Merger: To Be, Or Not To Be 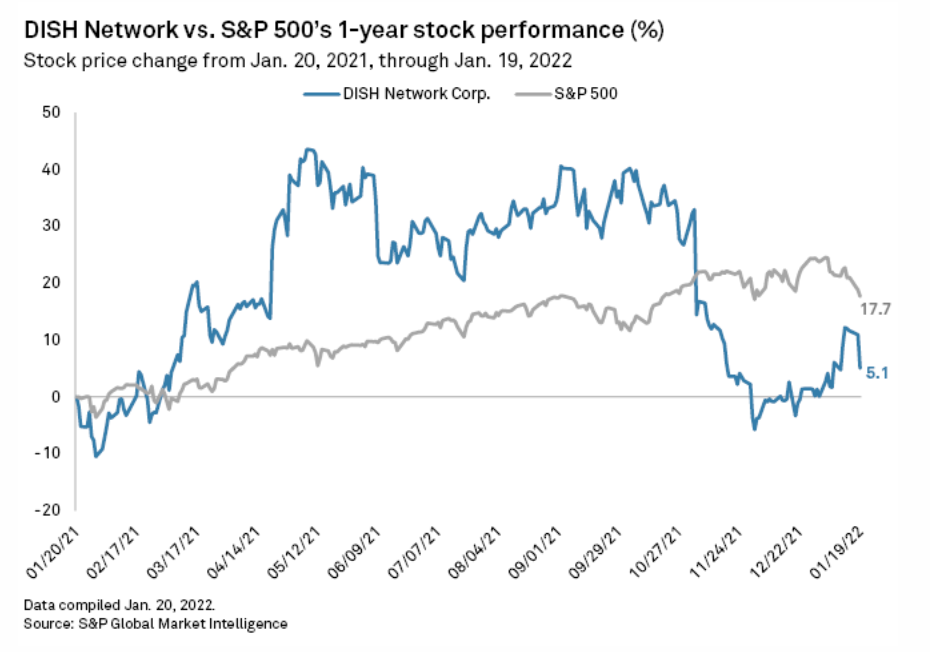 DISH recently named John Swieringa as a co-president of the company. In his new role, Swieringa will lead DISH's nascent wireless division, while fellow co-president Erik Carlson will head the satellite video and Sling businesses. Under this reorganized structure, the company can more easily split off into separate businesses, analysts said, potentially opening the door for a combination with DIRECTV. The latter satellite operator is jointly owned by AT&T Inc. and private equity firm TPG Capital LP.