Escalating tensions between Russia and the West have intensified the geopolitical risks to credit conditions and energy markets.

NATO-aligned leaders from Washington, Brussels, and Paris have attempted to diplomatically defuse the Moscow-Kyiv crisis. But after a high-stakes meeting between Russian President Vladimir Putin and French President Emmanuel Macron, Russia’s apparent refusal to commit to a solution, and U.S. President Joe Biden’s promises to block the Nord Stream 2 pipeline if an invasion occurs, global markets are eyeing  the potential for sanctions on Russia’s banking and energy sectors.

“Amplified geopolitical tensions—in particular, Russia’s dispute with NATO over Ukraine—raise the risk of restricted trade and capital flows, and could weigh on economic growth,” S&P Global Ratings said in a special update to its global credit conditions outlook, published yesterday. “Tensions between Russia and NATO have escalated in recent weeks, with the former deploying reportedly 130,000 troops at the country’s border with Ukraine and warning that it’s prepared to use military means to defend its interests in the region. Even if an armed conflict is avoided, the disagreements between Russia and NATO over security concerns will likely persist. As a deterrent, the U.S. and the EU have threatened a variety of sanctions that, among other things, could diminish Russia’s role in the global economy.”

S&P Global Platts Analytics expects the Biden Administration to target financial or individual sanctions to minimize the economic impact outside of Russia. U.S. sanctions and Russian countermeasures could limit corporate borrowers’ operations in the region—and even exacerbate Europe’s high energy prices and inflationary pressures, according to S&P Global Ratings.

Russia’s unique position as a major energy provider to the global economy—exporting oil and petroleum products to the U.S. and natural gas to Europe—has complex geopolitical implications. The OPEC+ alliance maintained its planned 400,000 barrel per day quota increase in output despite the rising geopolitical risks. But while the U.S. and EU coordinate their foreign policy plans to confront Moscow over its threats against Kyiv, Russia, and China entered into new energy supply agreements last week.

After a meeting between Mr. Putin and Chinese President Xi Jinping on Feb. 4, Russia and China signed major oil and gas supply deals between Russian state-run oil giant Rosneft and China's CNPC for supplies of 100 million metric tons, or 200,821 barrels per day, of crude and between Russia's Gazprom and CNPC for 10 billion cubic meters per year of gas, according to S&P Global Platts.

The broader implications of Russia and China’s energy deals are yet to be seen, but the alliance between the two powerful economies and tensions over Ukraine and the South China Sea region could create challenges for the U.S. Some Asian energy market participants have assessed the risk of surging fuel prices and supply disruptions related to the Russia-Ukraine conflict, while others have been unfazed by the escalating tensions, according to S&P Global Platts.

“Meanwhile, as China strives to be less reliant on foreign markets and technology, a strategic confrontation with the U.S. shows no signs of abating,” S&P Global Ratings said in its report. “A further intensification of tensions over the South China Sea region could weigh on trade, investments, and financial transactions for both and other economies—with some sectors suffering disproportionately.”

Although Russia was the third-largest supplier of oil to the U.S. in November, after Canada and Mexico, S&P Global Platts Analytics anticipates that the crisis will likely cause minor disruptions to Russian crude that can be supplemented by U.S. refiners. In addition, the forecast doesn’t expect the U.S. to impose secondary sanctions on Russian oil customers due to Europe's heavy dependence on the flows and oil prices already teetering around $90 per barrel.

While Europe has historically depended on Russia for its gas supplies, the European Commission has been exploring obtaining larger gas deliveries from other supply partners including those in North Africa and has increased its criticisms of Russia's behavior on the European gas market, according to S&P Global Platts. Tensions between the EU and Russia have simmered over Europe’s claim that Russia has contributed to the energy crisis that has sent European and U.K. power prices soaring by booking only minimal gas supply capacity to supply greater amounts of gas to Europe during the crunch.

"Risks of Western sanctions on the Russian energy sector will only reinforce a desire to increase export optionality to Asia, in addition to a desire for Chinese investment in upstream development," Paul Sheldon, chief geopolitical adviser at S&P Global Platts Analytics, told S&P Global Platts.

Today is Wednesday, February 9, 2022, and here is today’s essential intelligence.

Russia's standoff with the West over Ukraine continues to stir anxieties across global energy and commodity markets about possible new sanctions. Brian O'Toole, nonresident senior fellow at the Atlantic Council and a former senior sanctions official at the U.S. Treasury Department, joined Platts senior editor Meghan Gordon to discuss the penalties the U.S. and EU might impose if Russia invades. He predicts a "broadening and deepening" of the Western sanctions leveled in 2014. They also discuss how the sanctions might differ if there's a perceived lesser threat like a cyberattack and how the backdrop of rising energy prices makes the stakes so high. 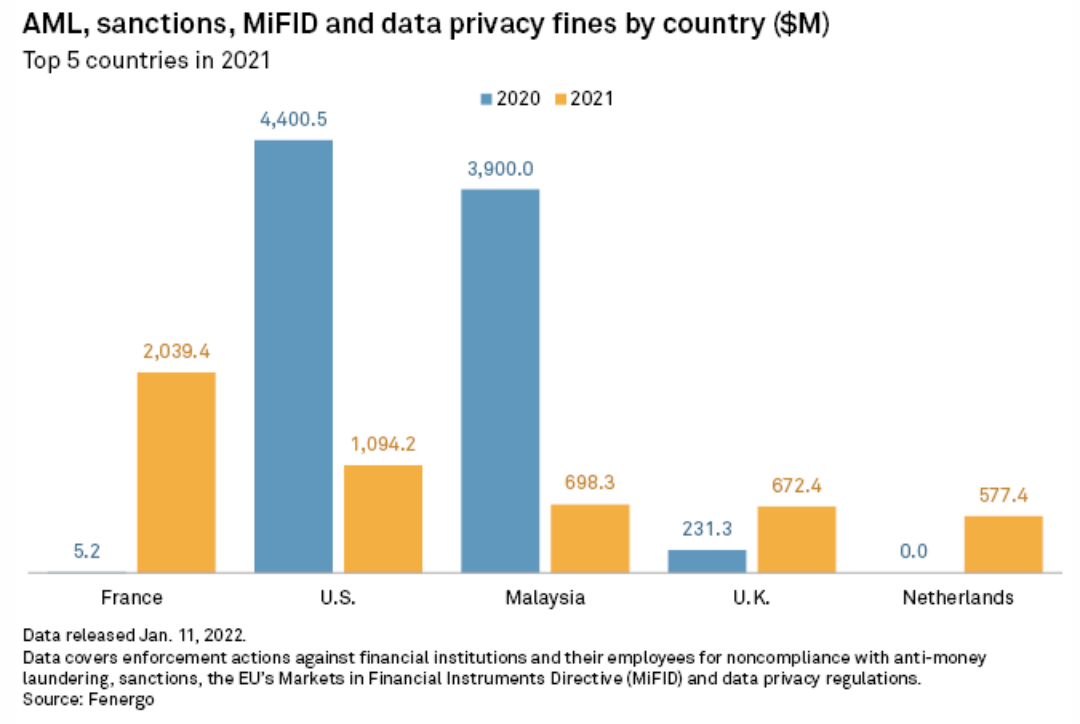 U.K. regulators handed down a record level of anti-money laundering penalties to banks in 2021, and experts anticipate fines to remain elevated as the country's Financial Conduct Authority (FCA) embraces its powers to pursue criminal prosecutions. Cases led by the FCA against NatWest Group PLC, Credit Suisse AG, and HSBC Holdings PLC helped to drive the value of U.K. anti-money laundering fines to $672 million in 2021, more than tripling from $206 million in 2020, according to research by regulatory technology company Fenergo. 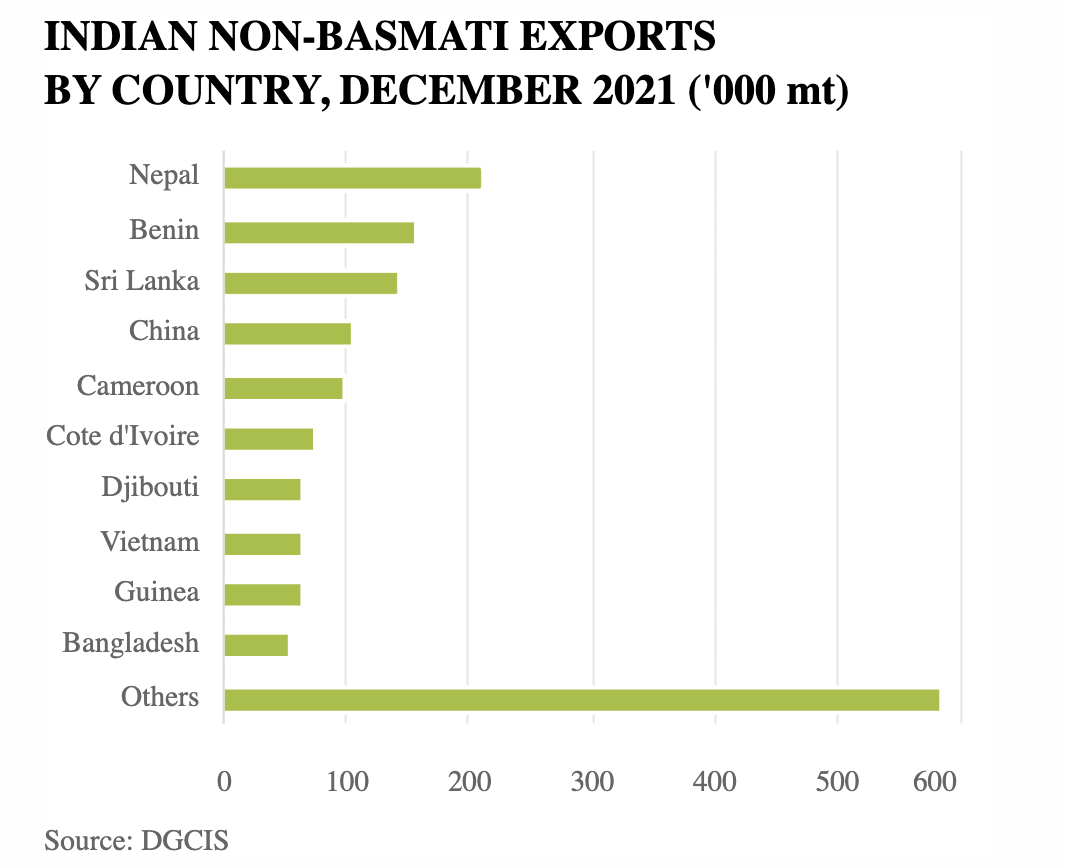 India's rice exports in 2021 totaled 21.4 million mt, up by 46% on the year and a new record, according to the Directorate General of Commercial Intelligence and Statistics. Bangladesh was the largest buyer of Indian rice in 2021 at 2.48 million mt, followed by Nepal, Benin, and China. India exported 1.97 million mt of rice in December, up by 31% year on year and by 33% month on month. Non-Basmati exports rose by 36% on year to 1.63 million mt, while Basmati exports increased by 3% to 343,346 mt. This reflects the competitiveness of India's non-Basmati exports throughout December amid kharif crop arrivals, especially for parboiled and broken rice.

Listen: Why A Siloed Approach To ESG Won’t Fly In 2022

The latest episode of the ESG Insider podcast explores a key theme emerging at the center of the ESG movement in 2022: The idea that environmental, social, and governance factors should not be considered in isolation, but rather should be understood in relation to each other. This episode welcomes Dr. Richard Mattison, president of S&P Global Sustainable1 and a member of the Taskforce on Nature-related Financial Disclosures, who talks about the need to tie together the net zero, nature, and social agendas. 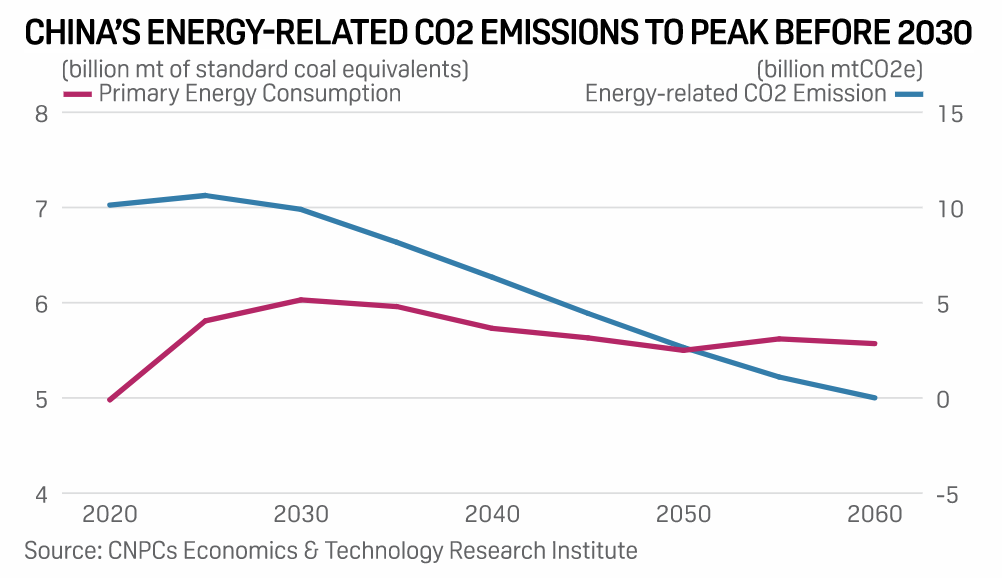 China National Petroleum Corp. (CNPC), one of China's big three national oil companies, has launched a road map for the country's energy sector to meet goals of carbon peaking by 2030 and carbon neutrality by 2060. While the CNPC road map is not China's official plan, the state-owned enterprise's think tank called Economics & Technology Research Institute is well regarded by energy policy makers. The road map shows that recent events like the energy crisis of 2021 and record high prices of generation fuels have already impacted long-term energy policy.

The Highs And Lows Of AT&T's Dividend Cut 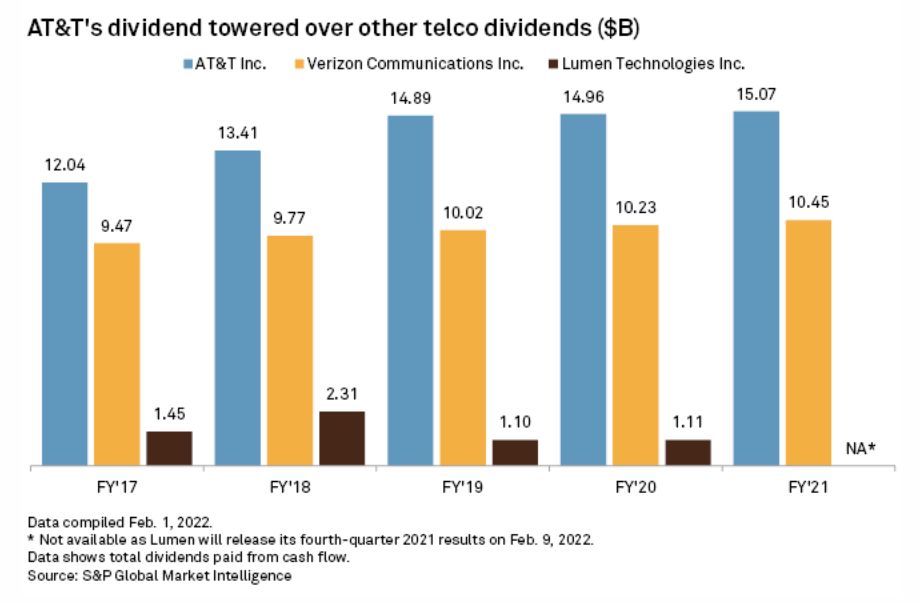 AT&T Inc. is getting smaller and so is its long-time dividend. As part of its plan to spin off its interest in WarnerMedia, AT&T's board approved a post-close annual dividend of $1.11 per share, down 46% from $2.08 per share prior to the split. All told, AT&T expects to spend about $8 billion a year on dividend payouts. AT&T said the new dividend will give the company much-needed financial flexibility as it simultaneously works to deploy mid-band spectrum for its 5G wireless network, expand fiber deployments, and pay down debt. Analysts believe the dividend cut is a step in the right direction but note the company has a rough path ahead of it.