As Russia’s invasion of Ukraine continues and the international community increases the severity of sanctions, global markets are feeling the pain on commodity trade flows.

In response to attacks on Ukrainian civilians in Bucha to Kramatorsk, NATO nations and their allies are pledging to send additional military aid to Ukraine. The United Nations voted to suspend Russia from its seat on the Human Rights Council. The heightened tension and uncertainty on the global stage is pushing more countries to halt energy imports from Russia, creating new dynamics within the global energy market. The Russia-Ukraine conflict will affect economic outcomes through many channels, including direct trade, energy and commodity prices, confidence, and policy responses, according to S&P Global Ratings.

This week, G-7 leaders—representing Canada, France, Germany, Italy, Japan, the U.K., and the U.S.—vowed in an April 7 statement to expedite reducing their reliance on Russian energy, including phasing out and banning Russian coal imports and cutting Russian oil dependency. Japan announced its ban on Russian coal imports today, becoming the first G-7 country to take such a step. The European Union today also implemented its fifth round of sanctions, including banning coal imports from Russia starting over the next four months. The Baltic nation of Estonia announced its plans to end all imports of Russian gas “in principle” before year-end. The U.S. voted to revoke Russia’s “most favored nation” trade status to further pressure the country’s economy and allow for increased duties on U.S. imports of metals and other goods from Russia.

The European Commission said today that its ban would affect a fourth of all Russian coal exports, totaling roughly €8 billion ($8.7 billion) annually in lost revenue for Russia. European coal and German forward power prices climbed higher after the announcement of the EU’s ban, according to S&P Global Commodity Insights.

"To find alternative supplies will be difficult, but not impossible as the global coal market is well supplied and diversified … That said, Russian coal is of a good quality—low ash, low sulfur, and okay NOx emissions—so some compromises would have to be made by coal purchasers,” Euracoal Secretary-General Brian Ricketts told S&P Global Commodity Insights. "Global coal flows will change with longer transport distances. India and others will struggle to pay the higher prices, we already see coastal plants idled in India and Safi in Morocco unable to secure coal … There are no good outcomes here and we will all be poorer.”

Market participants are looking ahead at what energy embargoes may come next, with particular focus on bans on Russian gas and oil. While the EU is aiming to reduce its reliance on Russian gas by two-thirds before year-end, policymakers are facing growing pressure to take more immediate action in order to reduce payments to Russian suppliers, according to S&P Global Commodity Insights.

The Russia-Ukraine conflict has exacerbated tightness in the oil market and sent oil prices spiraling. OPEC and its allies’ crude production fell month-over-month in March for the first time in more than a year, according to S&P Global Commodity Insights’ latest survey. The International Energy Agency agreed on April 6 to release 60 million barrels from its emergency strategic petroleum reserves to aid the broader oil market.

Russian refiners are cutting their runs due to diminished demand from international buyers, and Russian Deputy Prime Minister Alexander Novak said April 7 that Russia's oil output could fall between 4%-5% in April due to financial and logistical difficulties.

Today is Friday, April 8, 2022, and here is today’s essential intelligence.

Economic Research: Financial Fragility Of U.S. Households And Firms: Weaker In Fourth Quarter 2021, But Better Than Its Historical Average 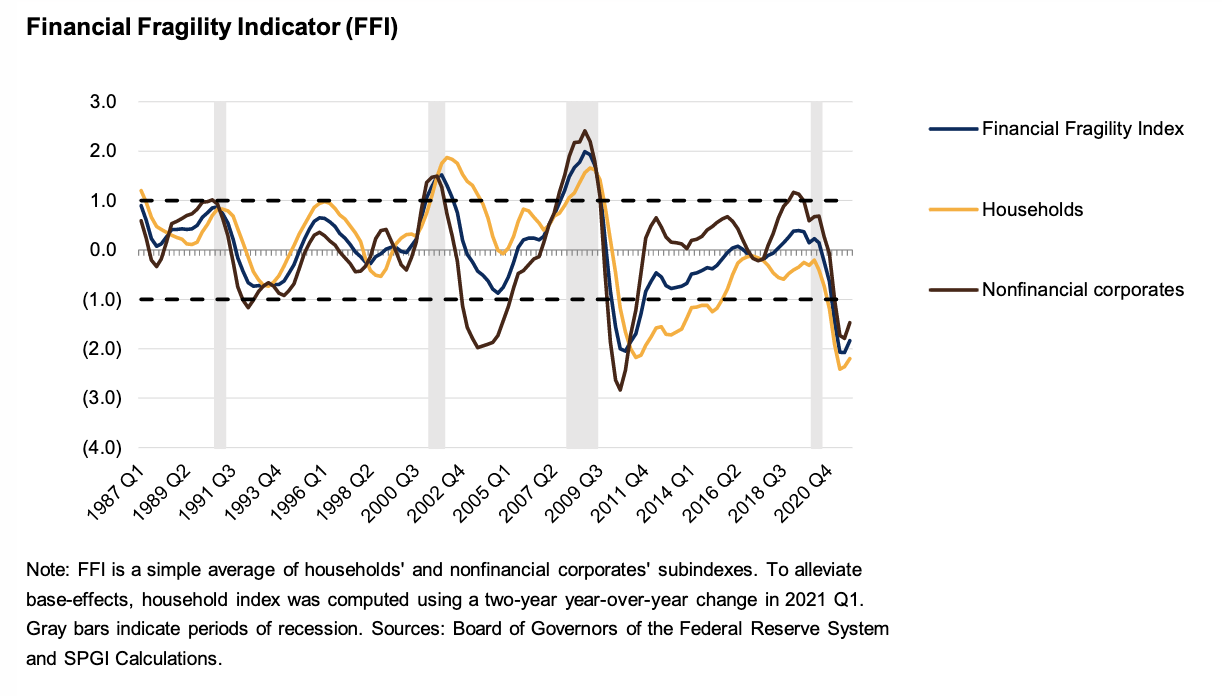 The Financial Fragility Indicator climbed to -1.83 in the last quarter of 2021, weaker than in the previous quarter where it fell to a 34-year record low of -2.08. Higher financial fragility came from weakness in both the household sector and the non-financial corporate sector. By type of risks, leverage risks and liquidity risks for non-financial corporates all increased. For households, signals were mixed for indicators of leverage risks and liquidity risks, but the weighted average of individual indicators pointed to worsening financial conditions, with the household fragility index ticking higher. 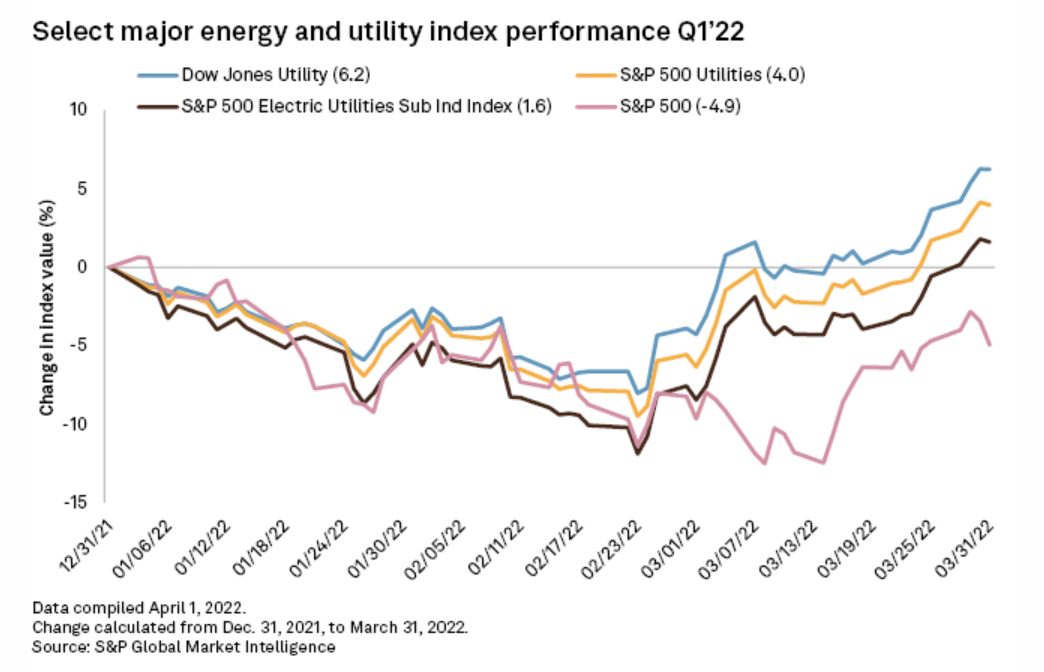 Electric and multi-utility stocks capped the first quarter of 2022 with modest gains, outperforming the broader S&P 500 market, which closed the period in the red. Markets saw a massive shift in mid-January brought on by inflation concerns, and they took a dive in February after Russia invaded Ukraine. At the end of March, the S&P 500 Utilities Index had risen 4% year-to-date, the Dow Jones Utility Index climbed 6.2% and the S&P 500 Electric Utilities Sub Ind Index was up 1.6%. The S&P 500 Index logged a negative return of 4.9%. 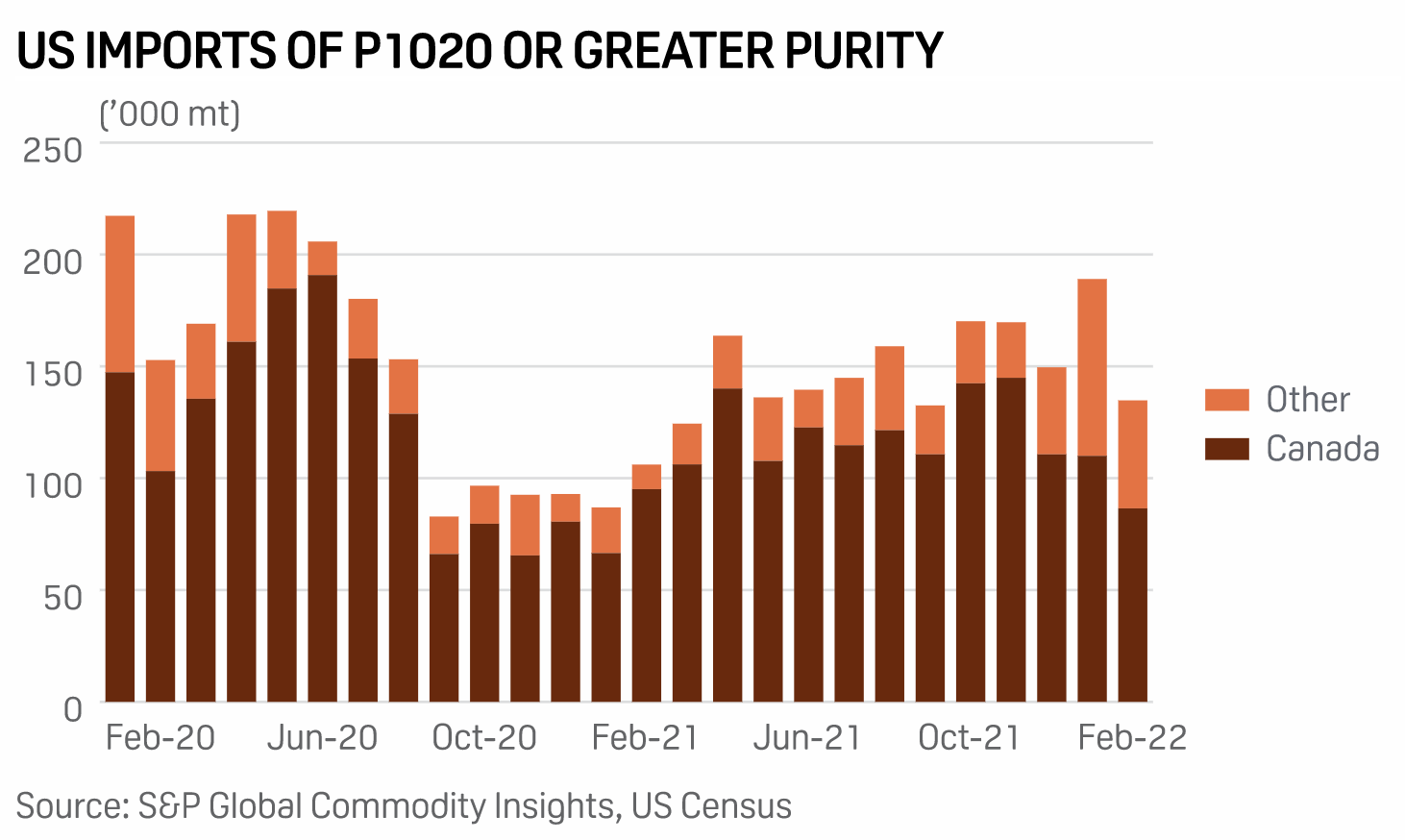 Primary unalloyed aluminum imports into the US in February totaled 134,793 mt, down 29% from January, as shipments from Canada dropped 21.4% to 86,504 mt, according to US Census Bureau data. Total P1020 imports from January through February jumped 67.76% to 323,838 m, the data showed. Shipments of higher purity aluminum from origins like the UAE were dropped 49% in February from January as logistics remain challenging to start the year. Higher purity imports from Russia were only 301 mt ahead of the country's invasion of Ukraine. 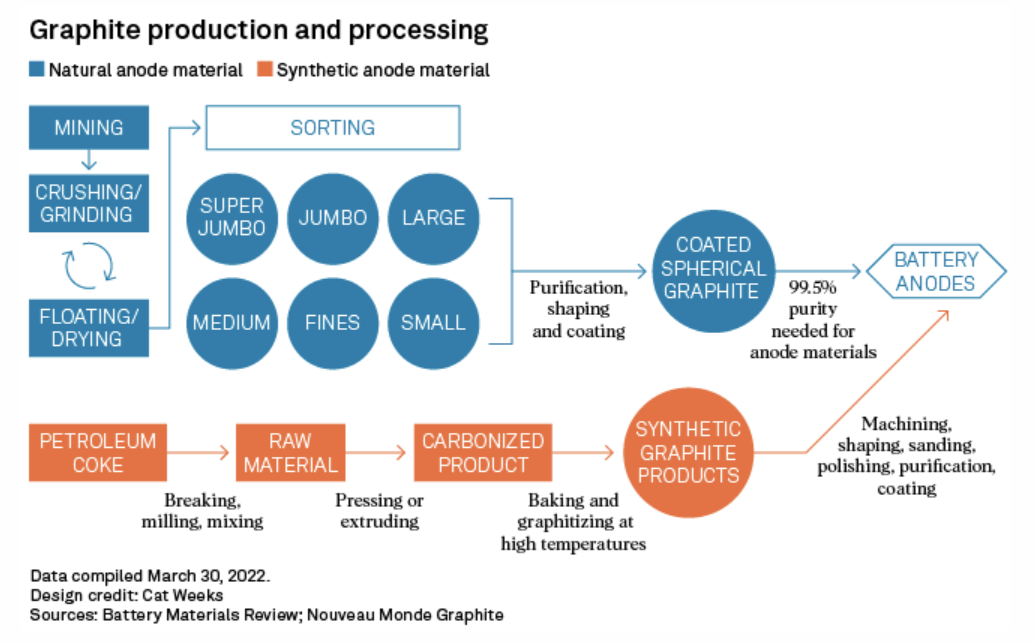 Production of graphite, the largest component of electric vehicle batteries by volume, relies on petroleum coke and other fossil fuels, creating a dilemma for carmakers pushing EVs as a zero-carbon transportation solution. An EV requires about 10 to 15 times more graphite in a battery than lithium. The graphite that will go into making the estimated 9.5 million EVs sold in 2022 could generate roughly 11.17 billion kilograms of CO2 equivalent during production, which is comparable to driving 2.5 million gasoline-burning passenger vehicles for a year. Analysts agree that EVs remain a far less carbon-intensive mode of transport than vehicles with internal combustion engines. With sales of EVs mounting fast, demand for graphite is expected to climb from 140,000 tonnes in 2020 to over 3.5 Mt in 2040, according to the International Energy Agency.

Listen: Are High Prices And Strong Structure Here To Stay For Light Sweet Crude, Or Have OPEC+ And The U.S. Relieved The Tension?

In this episode of the Oil Markets Podcast, S&P Global Commodity Insights editors Paul Hickin, Emma Kettley, and Sam Angell discuss with Joel Hanley the possible return of balance in the oil markets. The fear factor of the Ukrainian war has created high prices and volatility, but are they waning now that renewed supply is entering the market?

Listen: A Fuel’s Errand — Will Hydrogen Vehicles Ever Be Mass Market?

In the latest episode of Autology, market experts discuss the topic of hydrogen internal combustion and fuel cell vehicles. With inputs from the light passenger vehicle team as well as the medium heavy commercial team, the episode dives into topics including the supply chain of hydrogen vehicles, what regions are driving these technologies as well as an update on any OEM announcements.

—Listen and subscribe to Autology, a podcast from S&P Global