Against the backdrop of market uncertainty in the first quarter spurred by the U.S. Federal Reserve’s sooner-and-stronger quantitative tightening and the ripple effects of the Russia-Ukraine conflict, S&P Global Ratings expects financing conditions to notably constrict this year—with global bond issuance set to decline by nearly 5%. The Chicago Board Options Exchange's Volatility Index, or Wall Street’s so-called fear gauge, continues to creep above the high level of 30. And the Risk Appetite Index from S&P Global’s Investment Manager Index monthly survey remained in deeply negative territory at -29% this month—marking the second-highest degree of risk aversion recorded since the survey began in October 2020.

Monetary policy tightening, geopolitical uncertainties, and a slowing of global growth remain the biggest risks to the market.

“It’s been hard to find a bright spot so far this month as market sentiment has been firmly ‘risk off,’ with expectations of future volatility creeping higher,” Benedek Vörös, director of index investment strategy at S&P Dow Jones Indices, said in a market note today.

Deteriorating conditions across credit markets are increasing risks for weaker borrowers, but IHS Markit, part of S&P Global, believes current issuance has signaled that markets aren’t experiencing widespread dislocation and have maintained tolerance for a range of risks. Overall, U.S. companies appear to be well-positioned to keep their debt burdens under control as the Fed raises rates, on the back of investment-grade-rated U.S. nonfinancial corporations having deleveraged further in the final quarter of last year, according to S&P Global Market Intelligence.

Today is Thursday, April 28, 2022, and here is today’s essential intelligence. 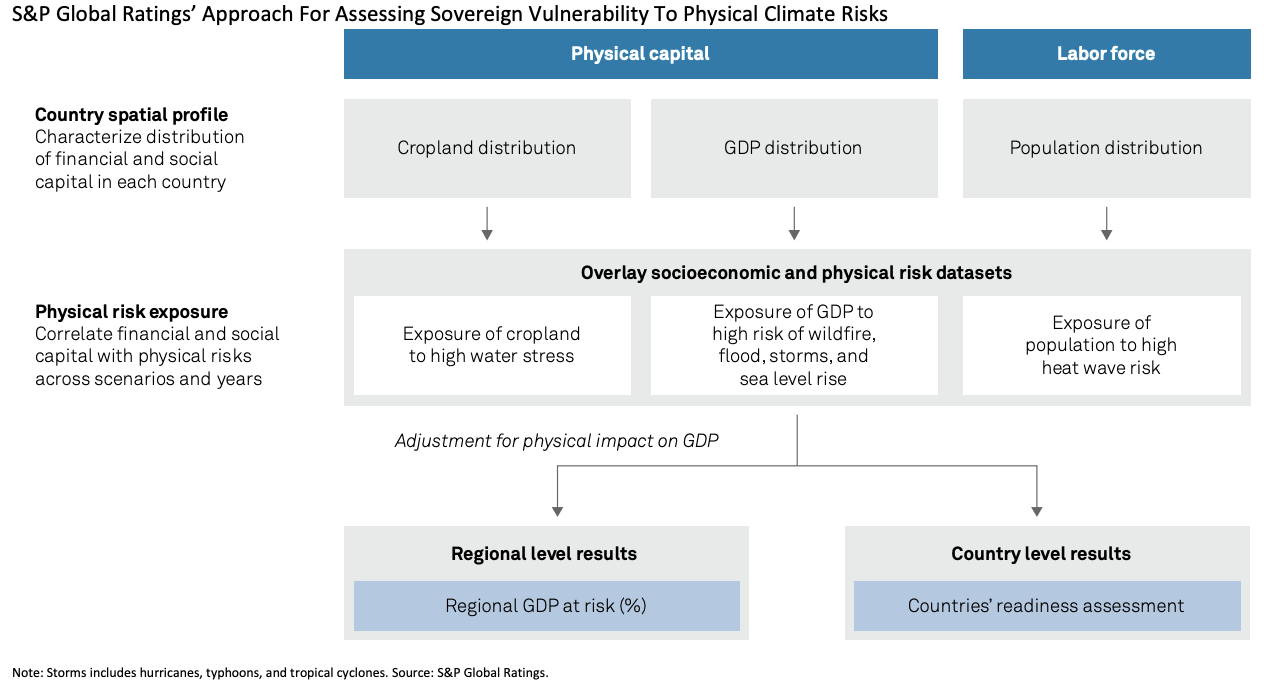 In an exploratory scenario analysis of the vulnerability and readiness of 135 countries to climate change over the next 30 years, S&P Global Ratings finds that physical climate risks could expose 3.3%, 4%, and 4.5% of world GDP to losses by 2050 under climate pathways RCP2.6 (Paris Agreement), RCP4.5 (current policies), and RCP8.5, assuming no adaptation and all risks materialize simultaneously. 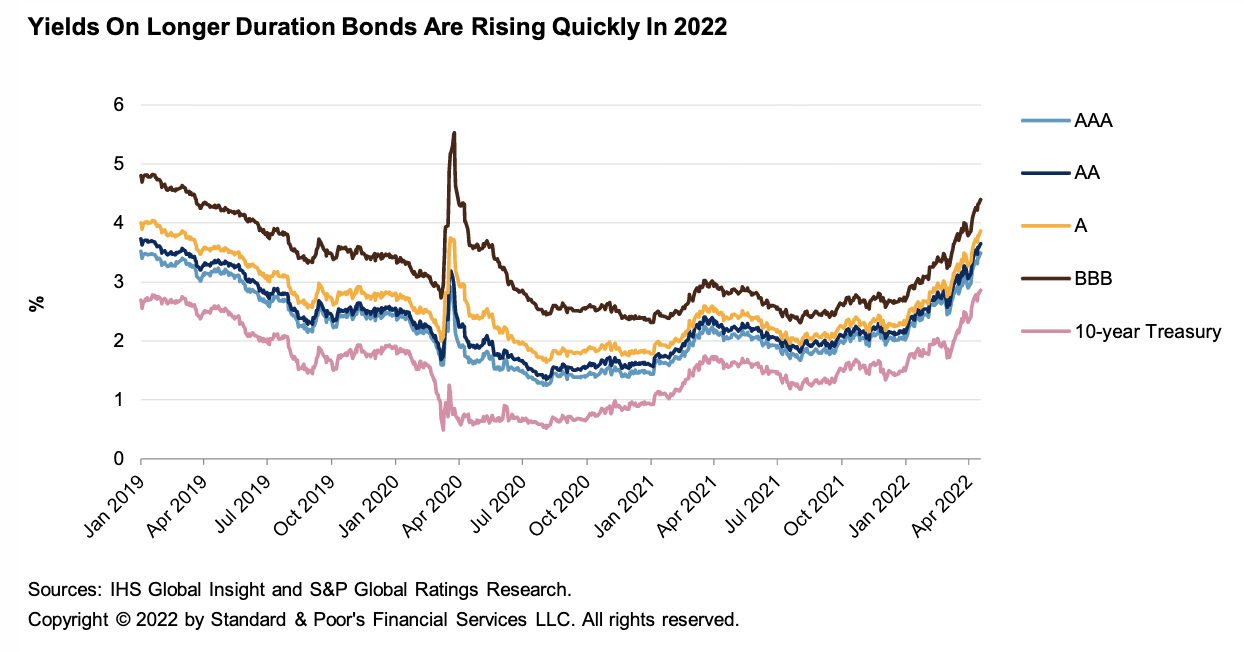 S&P Global Ratings Research expects global bond issuance to contract about 4.9% in 2022. It previously raised the possibility that the Federal Reserve could raise interest rates more quickly than expected in response to inflation, and after one quarter, it appears most market participants and members of the Fed's Federal Open Market Committee (FOMC) agree. Interest rates have risen rapidly thus far in 2022, and bond issuance has so far had mixed responses, depending on the sector. 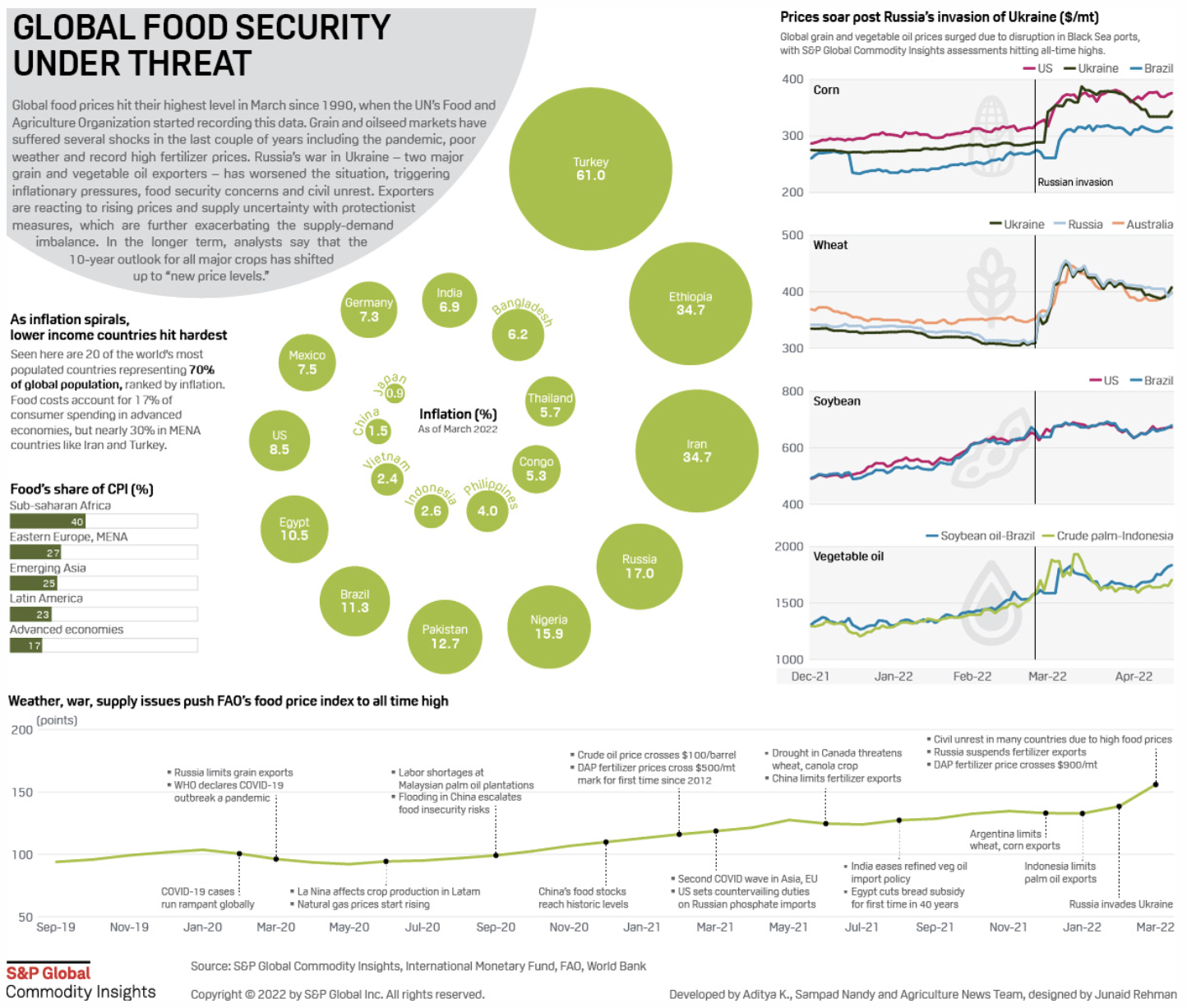 Russia's war on Ukraine has pushed food and energy prices to fresh highs, triggering food security concerns and putting pressure on households worldwide. Food supply chains are being forced to reroute at great cost as major importers of grains and oilseeds look to cover for stoppages of essential food exports from the Black Sea ports. Global food prices hit their highest level in March since 1990, when the UN's Food and Agriculture Organization started recording this data. 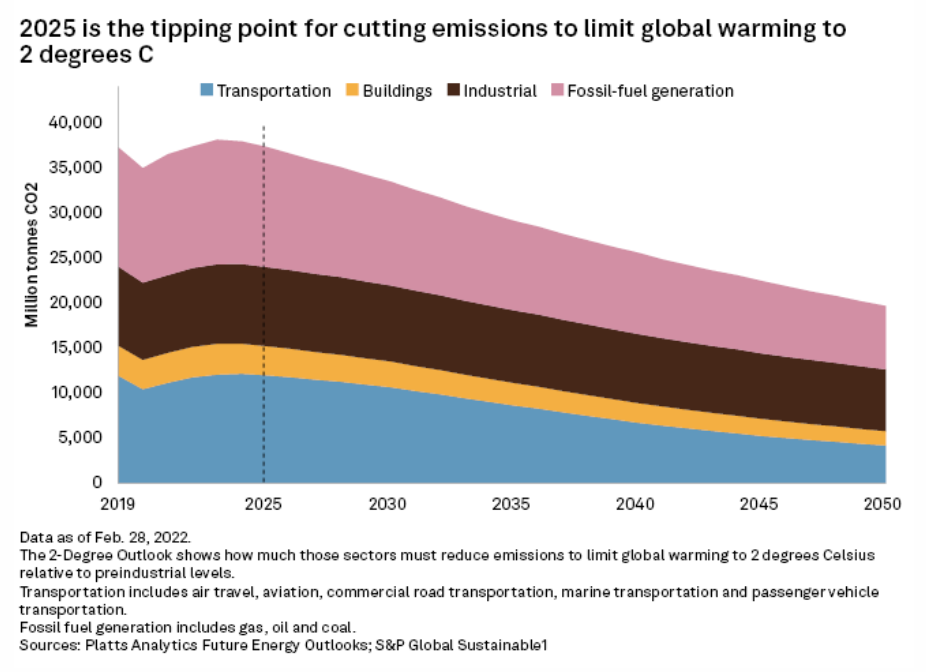 The Intergovernmental Panel on Climate Change's latest report on decarbonization pathways sounds the alarm that unless the world moves faster to make sweeping emissions reductions, it will be locked into a global warming trajectory with exponentially higher losses and damage for businesses, nature, and society. The report issued April 4 is the third installment of the IPCC's current climate assessment cycle and provides a stark reminder that the world is likely to overshoot 1.5 degrees C (2.7 F) warming relative to preindustrial levels and, without immediate action, is on pace to go over 2 degrees C (3.6 F). At the same time, the IPCC wrote that the use of technologies that can remove carbon from the atmosphere could help return the temperature increase to 1.5 degrees C by the end of the century. 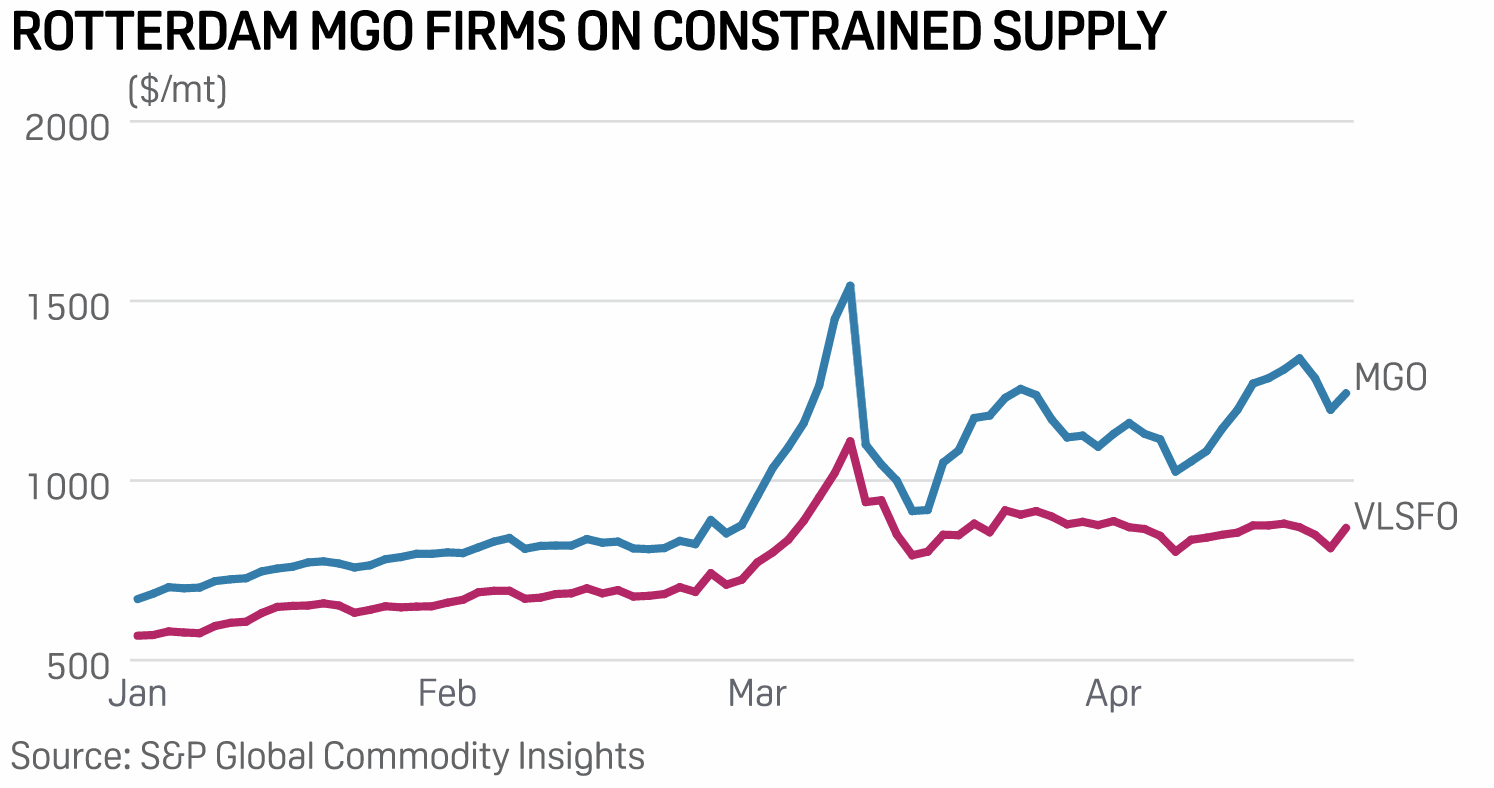 Marine gasoil prices in the Amsterdam-Rotterdam-Antwerp hub are spiking and there appears little let up in the supply squeeze of the fuel crucial for ships staying compliant with sulfur standards in the European waters. Delivered MGO at Rotterdam reached $1,340 April 21, surging 30.7% in two weeks. Levels across the Mediterranean climbed to similar highs. Prices have dipped since, with S&P Global Commodity Insights assessing the Rotterdam value at $1,243/mt April 26. Ships trading in designated emission control areas across Europe must use fuel with 0.1% sulfur, namely MGO, rather than other higher sulfur bunker fuels. MGO comes from the middle distillates family but often lags in terms of profitability. European refiners are also prioritizing output of diesel and jet ahead of gasoil that has further eaten into MGO supply. 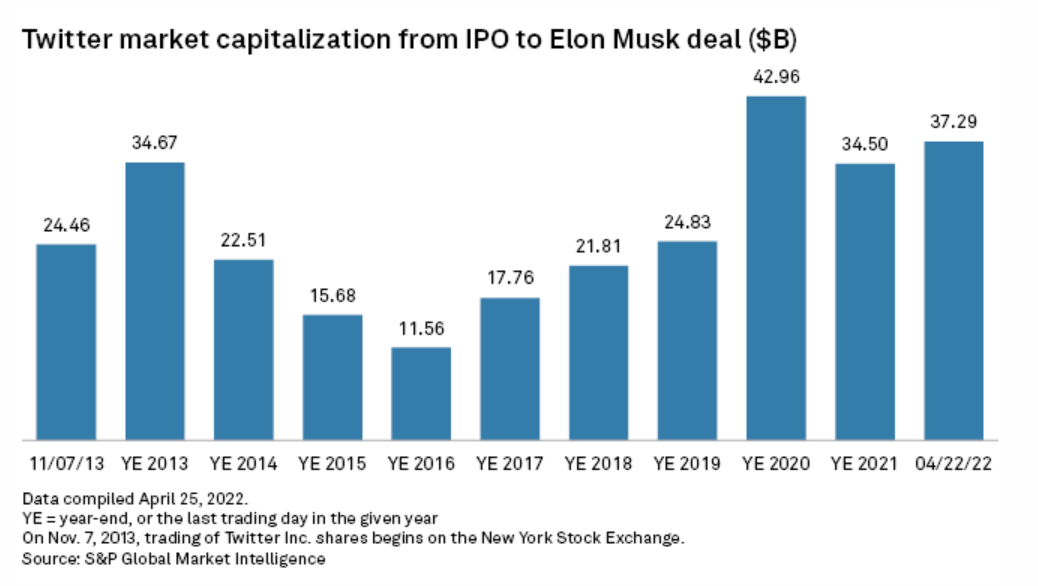