How France’s Elections Could Shape Its Energy and Financial Policies

The 2022 election is racing to a run-off between the incumbent French President Emmanuel Macron and the far-right National Rally party’s Marine Le Pen, following the April 10 vote on the initial 12 candidates. The 2022 French elections come as the coronavirus pandemic continues to affect the global economy, Russia's devastating invasion of Ukraine threatens Europe’s economic and energy security, and the French government has confronted rising energy costs and unprecedented reactor outages that are affecting populations. The outcome of the final, second vote on April 24 will see either the re-election of President Macron or the rise of Ms. Le Pen—and will indicate how the European country pushes forward with its energy security and decarbonization goals alongside the outlook for its banking industry.

The outcome of the presidential election affects France’s position as a potential pioneer of Europe's nuclear power plans, but risks the country’s net-zero targets, according to S&P Global Commodity Insights and S&P Global Market Intelligence.

Meanwhile, "if [energy] prices stay at the current high levels, there will be pain," Thomas Pellerin-Carlin, director of the Jacques Delors Energy Centre think tank, told S&P Global Market Intelligence in an interview ahead of the election about how the new government may need to address the issue carefully to avoid a repetition of the yellow-vest protests that unfurled across France in 2018-2019. "I see a lot of dry gun powder and I see a lot of people with matches.”

French banks also face risks from the outcome of the election’s final round. Industry experts interviewed by S&P Global Market Intelligence said that while President Macron has overseen a pro-business presidency since 2017, the election of Ms. Le Pen could see France distance itself from the European Union and subsequently see turbulence in the financial system.

"A Le Pen presidency would bring a degree of uncertainty and uneasiness related to France, which could affect French banks' European activities," Sam Theodore, senior consultant at the credit rating agency Scope Group, told S&P Global Market Intelligence. "President Macron has managed to strengthen France's international reputation and favorability and solidify its leadership role in Europe … Such an increase in France's soft power serves well French banks' European and international presence [as] France has probably one of the most geographically diversified banking landscapes worldwide."

The new government’s power to implement its policies will depend on the results of the French National Assembly elections in June.

Today is Monday, April 18, 2022, and here is today’s essential intelligence. 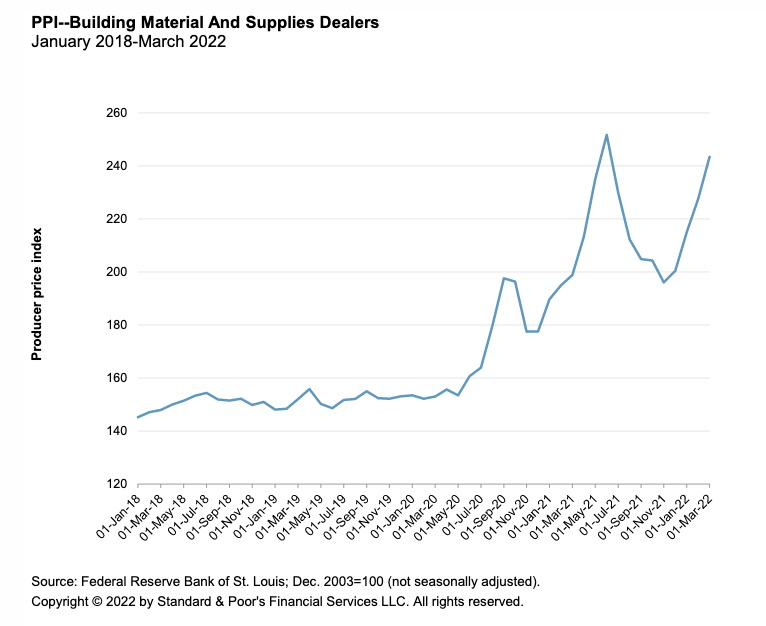 Overall project cost inflation for public sector sponsors creates a dilemma: Either scale back the scope of capital programs or increase funding from some combination of taxes, tolls, general fund sources, federal grants, or additional debt. The highest construction cost inflation seen in decades has arrived at an inopportune time; as historic levels of federal investment in infrastructure are starting to flow, cost inflation is beginning to erode some of its benefits. The Producer Price Index for building materials and supplies increased 24.9% between March 2021 and March 2022, and 58.6% between pre-pandemic January 2020 and March 2022.

In the latest episode of CLOs Uncovered, Hina & Sandeep are joined by Ruth Yang, global head of thought leadership, as their guest. Listen to their discussion and hear about the current challenges to the credit markets. The aim of CLOs Uncovered is to provide market participants with further advanced analytical insight into Corporate Credits, CLOs, and Leveraged Finance deals, with S&P Global Ratings regular podcast, based on key features we’re seeing in corporate credits and sectors that CLOs are exposed to.

—Listen and subscribe to CLOs Uncovered, a podcast from S&P Global Ratings 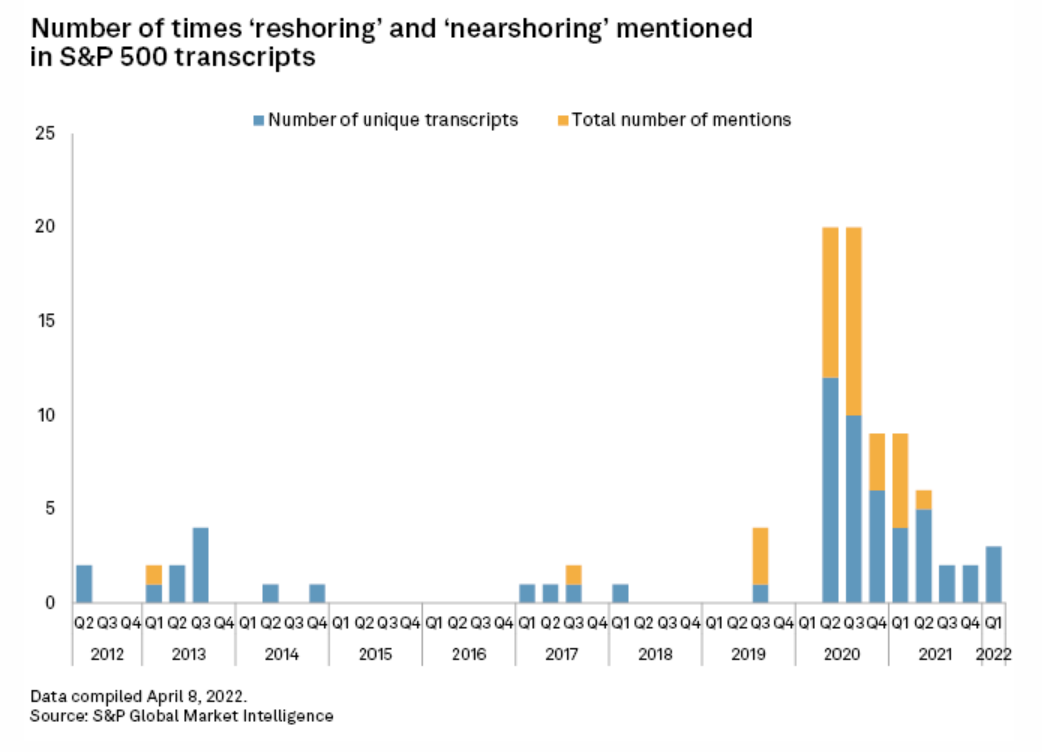 U.S. companies have stepped up their exploration of reshoring supply chains after being caught out by dependence on Asia. Companies including Intel Corp., General Motors Co., and U.S. Steel Corp. are building new manufacturing capacity in the U.S, while other executives have increased mentions of reshoring—bringing production back to their home countries—during investor calls since the COVID-19 crisis began. President Joe Biden has made moving supply chains closer to the U.S. a key pillar of his economic agenda, largely continuing efforts by his predecessors to rebuild domestic capacity and grow the number of high-paying manufacturing jobs.

The world is working to meet ambitious environmental, social, and governance targets in the form of the Paris Agreement and the U.N.'s Sustainable Development Goals. It's clear that banks will play a central role in financing the changes needed to meet these goals. In the latest episode of the ESG Insider podcast, hosts Lindsey Hall and Esther Whieldon talk with Karen Fang, global head of sustainable finance at Bank of America, about how one of the largest U.S. banks is approaching sustainability challenges. In the episode, Karen discusses the bank's goal of deploying and mobilizing $1.5 trillion in sustainable finance by 2030, how Bank of America is working to align SDG and ESG goals, and steps the bank is taking to meet its own net zero goal. She also talks about the new climate disclosure proposal from the U.S. Securities and Exchange Commission and the difficulty of measuring and managing Scope 3 emissions. 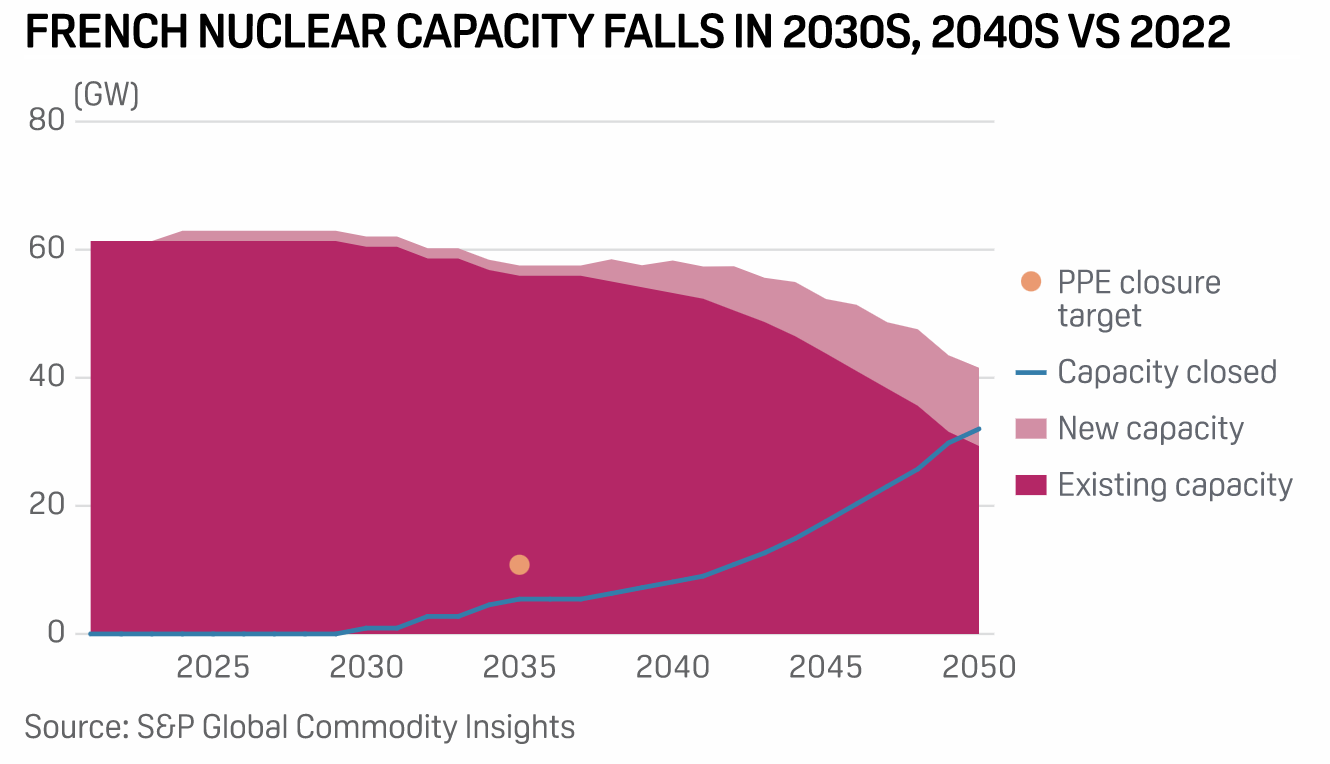 As Europe's energy priorities are challenged by Russia's invasion of Ukraine, France is set to lead Europe's ambitions on building new nuclear plants, but the ongoing presidential elections present some risk to this, and other ambitions linked to France's aim to meet its decarbonization and energy independence goals. S&P Global Commodity Insights, in its European Electricity Long-Term Forecast published on March 29, forecasts France to see the highest level of new nuclear build in Europe, albeit still not enough to prevent gradually falling total installed capacity to 2050 as existing reactors come to the end of their technical lifespan.

Battle For Twitter's Future Boils Down To Innovation Vs. Distraction 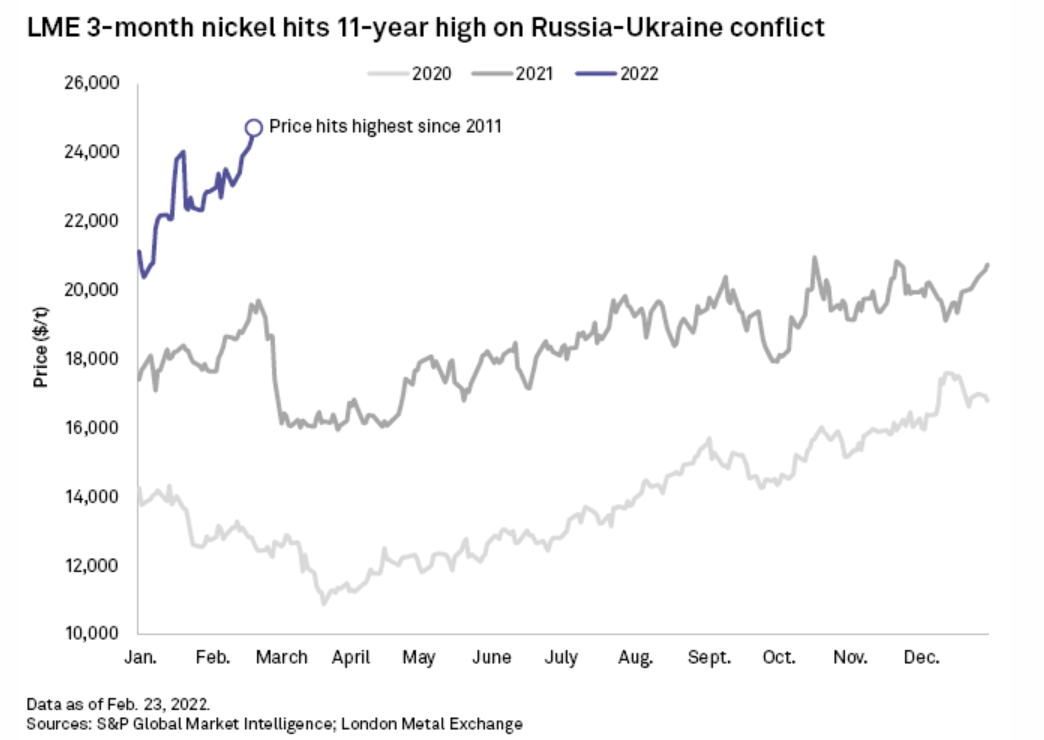 While Elon Musk's bid for Twitter Inc. is sure to draw the attention the tech mogul seems to relish, there are plenty of other challenges facing Twitter separate from the Tesla Inc. CEO. Musk is offering $54.20 per share for 100% of Twitter's stock in what he described as his "best and final offer." Musk wrote that he would reconsider his status as a shareholder if the sale did not go through. "I think it's very important for there to be an inclusive area for free speech," Musk said when asked about the reason for his interest in Twitter during an April 14 TED Talk. "Twitter has become sort of the de facto town square. People should have both the reality and the perception that they should be able to speak freely within the bounds of the law."